I'm asking for input and ideas for this new adventure.

Originally, when this 30foot travel trailer came into my life three years ago, i dreamt of building a much larger "hoop greenhouse"
over it, with am inner framework of wood to hold extra insulation around the trailer, and for supporting the hoop structure.
it was going to covered with a four year greenhouse film.

Ir was going to be a prototype of  "emergency housing for homeless folks", as i have been homeless a good part of life.

Being that this is someone else's land, and not wanting to invest thouseands of dollars into electric and water facility for this build site,
the trailer became our storage. I roped tarp over for the past three years and NOW need to do something which will be better than a tarp, to
keep the roof dry.

~~~~~~~~~~~~~~
I am planning to sell the trailer in teh next two months as a HOMESTEAD HOUSING STARTER KIT!
complete with Jenkins composting toilet and other great supplies which would help someone get their trailer/tiny home set up quickly.

THis new cover will go with the trailer when it goes to new family.

~~~~~~~~~~~~~~~~~~~~~
My present idea is to create something like a hoop structure, maybe just tiny bigger than the trailer, using what I already have:
I would probably need to cut the film to make an opening where the door is.
and with greenhouse film, would not need to cut any 'windows' as the film would allow sun to shine into the trailer.

*manyREBAR pieces 30inches long, which can be driven into the ground to stabilize the PVC at teh ground.

*30 pieces of 5 foot galvanized steel conduit, for purlins, which can be cable tied to teh struts

*more than enough of 1x6x12foot long rough hemlock, which can be hip boards to stabilize the hoop struts.
and also to help with the ends.

As you can see in the photos below, the billboard tarp is held in place with 1/8 inch wire rope and tiny Ubolts. so they can be used again!

for the first two years, i invested in ropes which just shredded in the sun. wire rope is the way to go for UV protected strapping.
~~~~~~~

THe two MAIN REASONs i would like to go with a hoop over the top of the trailer is because of all the roof vents and sewer vents.

and this would also keep the rain and snow off the top of trailer.

~~~~~~~~~~~
Greenhouse film
remnants for sale at amleonard poly remnants
i think it is important to buy the dripless film for this so that there is not moisture buildup inside top.


I would like to get the greenhouse film so that it is wide enough to go to the ground on each side. Due to how weather blows up under the trailer
as we live on a hill.
and then roll it open somehow to have ventilation under it on sunny days to help dry out under and keep humidity down.

OR maybe it is best to just cover the trailer over the top and partially sides/ends.
and leave the bottom open for now.
~~~~~~~~

also, my brain is looking for help with how to do the ends of the cover/shelter to keep snow.rain off hte roof. 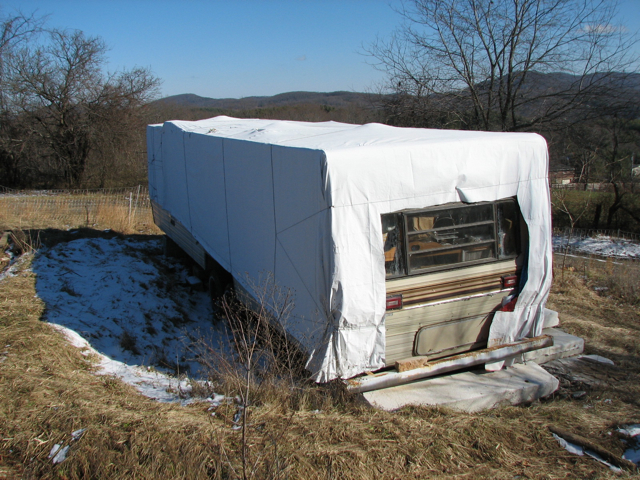 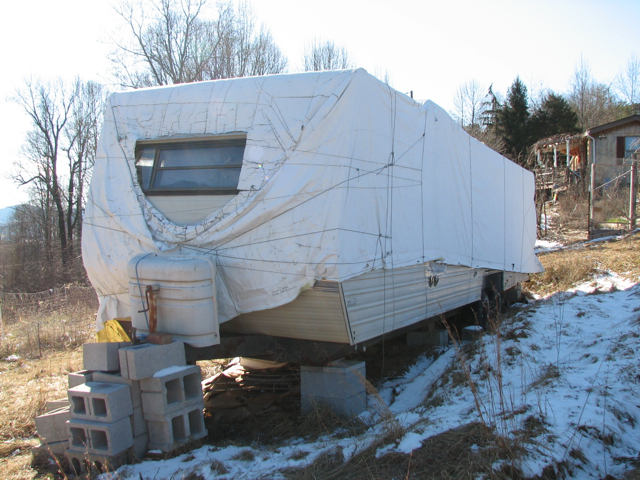 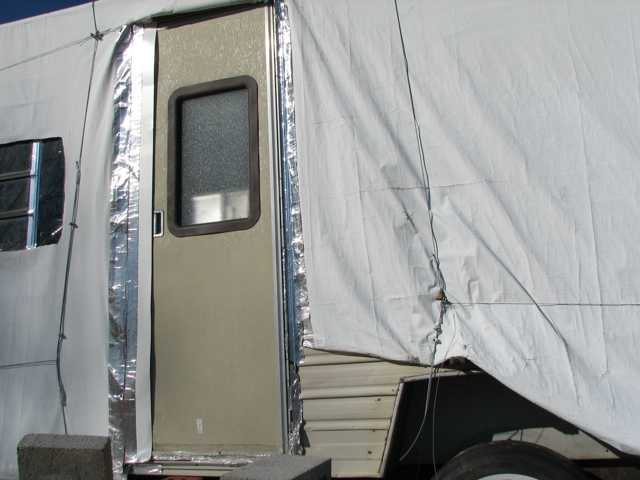 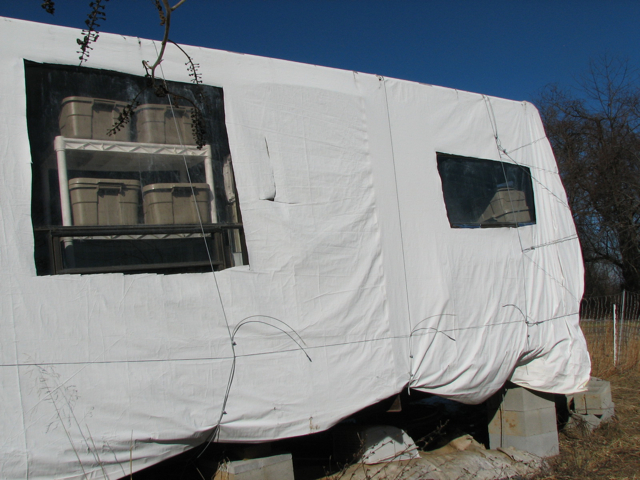