posted 5 years ago
Hi,
I'd like to put to good use some cubic meters of dirt that were excavated from a house site, to build a couple of terraces in front of the house, so to avoid it being hauled offsite to landfill, somewhere.
The dirt has been piled so that the more fertile part/top soil was separated from the subsoil.

The house in question lays on flat ground where a somewhat steep slope starts, a few meters off the house basement, reaching the access road at the bottom of the slope.
This embarkment has a slope which would need to be filled (in part) in order to create these terraces, for growing veggies since it has a good S aspect and it's real close to the house, so it would be perfect a zone 1 garden, but I am not sure how to proceed to get the job done.
At least having a design of sorts to show to the machine operator would make things easier for him/her.

Below is topo map showing what the contours look like.

(for some reason this doesn't show up, I'll attach it below)
The area where the terraces are wanted is enclosed within the magenta colored line.
Each contour line in the topo map has a gradient of 1 m with respect to the next. So the vertical distance from the bottom of the access road till the top of this small hill is about 8 m high

We'd like to have a first terrace right outside in front of the two buildings. That's probably the easy part since this is still pretty flat ground, and at least another one
right below.
I guess we will need to build some retaining walls given the steep slope (seems to be 1:1 or 45º) in order to contain the dirt that will be downloaded there, and make the terrace wide enough. but I am not sure whether we can do it without having to set up the wall.
I attach a few pics so that you can have an idea of what the slope looks like

I am also considering other (simpler) options like filling the slope somehow with this salvaged dirt, but not with the intention of making a day-by-day usable terrace, but instead using it for creating a sloping embarkment and plant it with herbs bushes and fruiting shrubs, and an understoy of herbacious plants for covering and stabilizing the soil. There are other parts, may be even on the north side of the house where the zone1 garden could go, away from the shadow of the house, but....I'll see what ideas come up first.
Cheers
DSCF5324.JPG 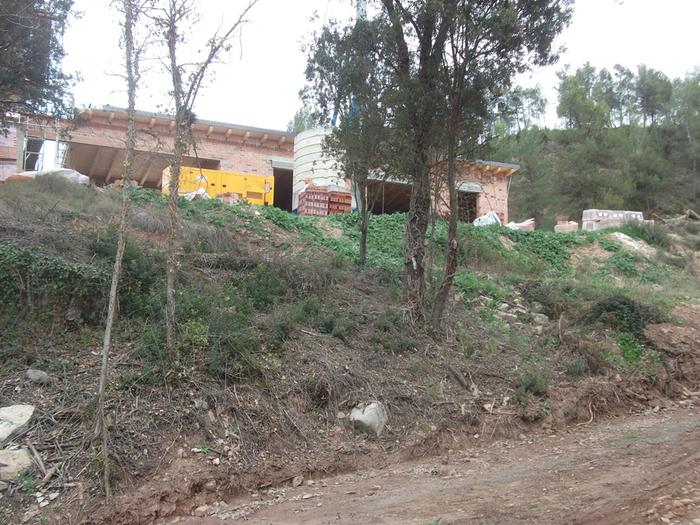 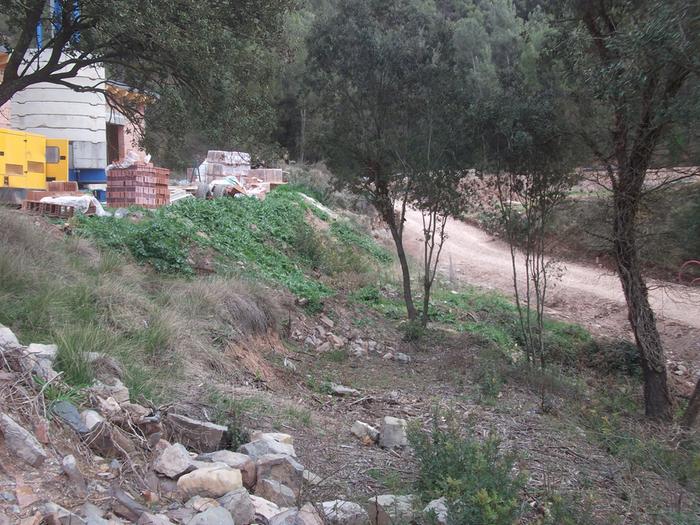 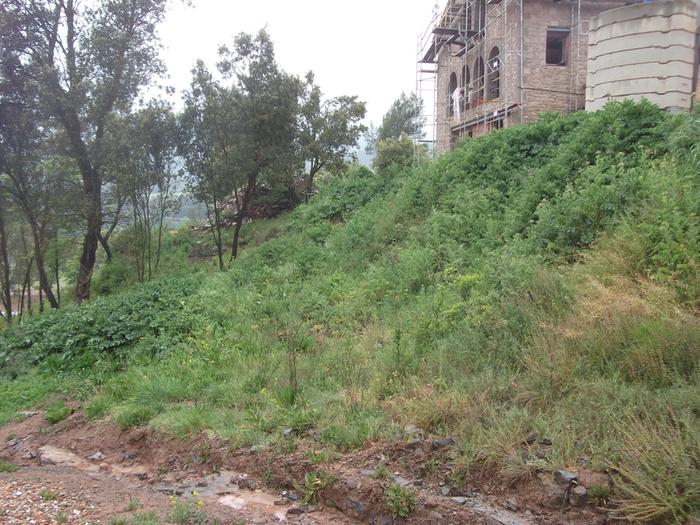 posted 5 years ago
I think an engineer should be consulted. It's difficult to foresee how the soil will behave with excessive rains or frost heaving in the winter time, especially frost heaving behind a retaining wall. Just my thoughts.

posted 5 years ago
Hi James,
thanks for your feedback.
I guess you say that because you think I'd like to fill the whole slope with earth till the very top?
Actually my idea is not to fill it all but just somewhat midway between the access road and the existing slope, trying not to rise the dirt for more than 2m.
Cheers

posted 5 years ago
That slope begs for terraces at least two but I think three would work out better.

Yes you will need to build the retaining walls first then backfill with that left over soil, it will not matter if the subsoil and top soil get mixed since you will be building a biosphere in that soil.
The retaining walls on contour will look very nice too.

You will need to; make sure there is a good footing for each terrace wall, use dead men construction so the wall won't decide to lean downhill and eventually topple over.

posted 5 years ago
Hi Bryant
what you write prompts me a couple of questions.

Do I need to use a dead man in a rock wall too? I have only seen that in wooden walls.

If I build more than one terrace this means that I'll have to start closest to the actual slope otherwise the retaining wall on the highest terrace will sit on top of the dirt of the lower terrace behind
which I guess is not what is wanted.
Cheers
Bryant RedHawk
gardener

posted 5 years ago
Rock retaining walls can be done several ways that are stable. 1. you can do the slant up hill type building, this involves a wider base that tapers up as it rises with the face slanting up the hill to resist the pressure of the soil behind. These are normally done with mortar.
2. you can build a standard pyramid wall, wide base, tapers to top from both the down hill and up hill sides. (this one requires a lot of rocks, can be modified so the exposed side(the downhill) is plumb.
3. you can dry stack or mortar a "brick" type double wall and install dead men every six feet by using heavy metal flat bars (I like to use 1/4" steel or aluminum for these and I use a power carver to create a pocket in the rock that will be the holder (usually one of the longer rocks that can be tied in place by several other courses. Sometimes this rock will need to be pinned, depends on the type of rocks, height of wall, amount of soil that will be creating the pressure.

Your slope should dictate the number of terraces, the physics of soil pressure usually means narrower terraces as the slope steepens. I have some that are only two feet wide and some that are 6 feet wide.

I would put the top retaining wall in first, since that is going to be "ground level". Once you have that one in place, you will be in a better positon to set any other terraces positions.
As the retaining wall gets higher, the pressure from the soil against the wall doubles every 12 inches of height and that means for rock walls thicker walls.

I just make suggestions here, you aren't paying me with the expectation of your terraces surviving decades.

Posts: 3778
Location: Upstate NY, zone 5
305
4
posted 5 years ago
I saw the rocks in your photos and thought they would make fine retaining walls. Based on your topo map, it looks like you could build 1 meter high retaining walls and get 3 meter or more terraces, which is ample. I think 1 m or less walls could be built simply and not need the extra work of deadmen. Any failures would be less dangerous as well. If you limited walls to 2/3 m high with 2 m terraces, you could probably make your available rocks go the farthest, as walls wouldn't need to be so thick. Access for filling will probably dictate the optimum size and spacing.
Antonio Scotti
pollinator
Posts: 164
Location: Spain
15
I like...

posted 5 years ago
Thank you all for your advises, I am starting to better understand what do.
Cheers