posted 4 years ago
Moved it to here from Todd Parr's ID a weed.

I have this stuff all over and it gets several feet tall. I have had specimens reach 11 feet and need to be cut with a reciprocating saw (sawzall) or a small chain saw! Up to about 7 feet you have a chance with a fairly big lawn tractor and a large deck to take it down. A chance. (I hung it up on a 7' today)

7091.JPG
7544.JPG
7550.JPG
7552.JPG
7556.JPG
Andie Carter
Posts: 13
1
posted 4 years ago
It's the weed version of amaranth, people call it pigweed.
John Weiland
pollinator
Posts: 1764
Location: RRV of da Nort
347
posted 4 years ago
It's good that you have it in that top photo with "regular" red root pigweed (Amaranthus retroflexus), but your culprit, accounting for ecotype variation is likely Palmer Amaranth, current bane of large scale production agriculture.  It has become resistant to many of the common herbicides used in large-scale ag:  https://phys.org/news/2017-04-mechanisms-herbicide-resistance-palmer-amaranth.html

The ecotype variation on the "paint" pattern is shown in the photos below, as well as comparisons between the inflorescences of the common pigweeds. 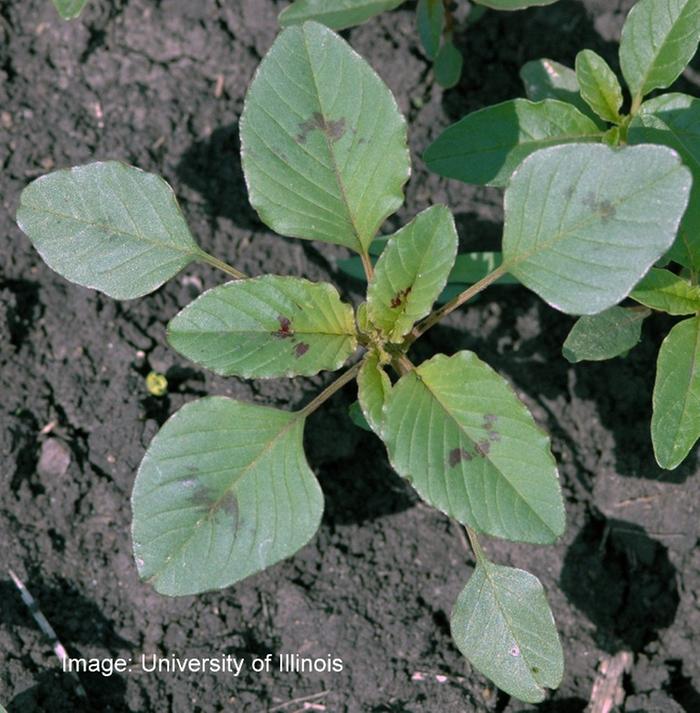 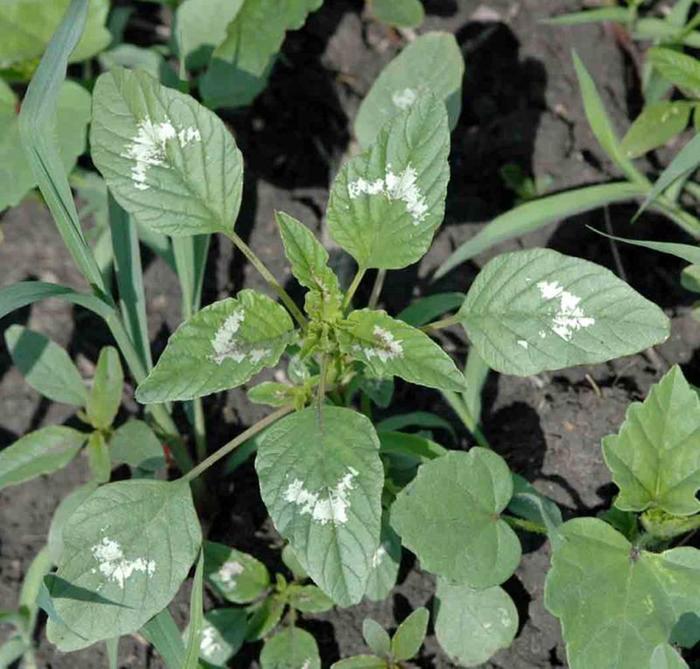 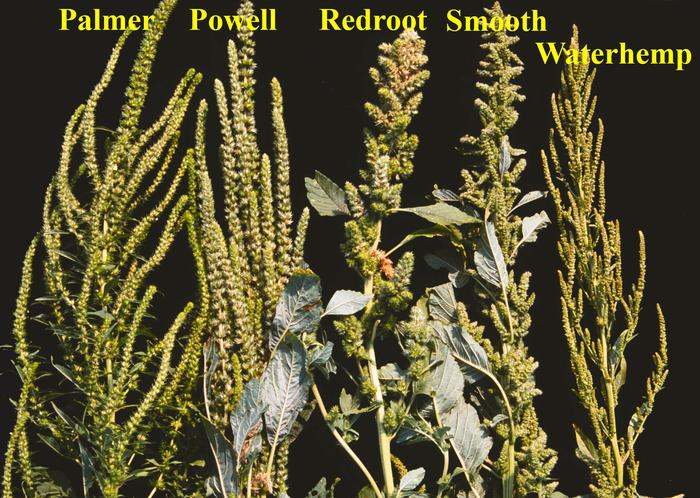 posted 4 years ago
Palmer has made 11' here and I mowed some 7's today into history. Thank you, John Weiland, that last picture is almost priceless. Yep, I'm murdering Palmer and it's EVERYWHERE!!!
Phil Gardener
pollinator
Posts: 336
Location: Near Philadelphia, PA
73
posted 4 years ago
Amazing growth on poor soils, I look at "weeds" and often wonder if we are trying to grow the wrong things!  I know this stuff has been described as the Devil's own weed, but is it edible (potherb, grain)?

posted 3 years ago
Our garden was filled with these for years, and I finally started leaving a space for them.  We'd harvest loads of leaves, freeze them and eat them all year like spinach.  I've literally had pounds of pigweed.  It's stronger tasting than spinach, so we usually mixed it with a sweet kale or collard for things like the Indian dish, saag, for example.

One year, I decided to try an experiment.  I took some regular pigweed seeds (not the Palmer one), and started them early, then put them in the ground and actually took care of them.  And I also left a freeseeded patch to grow like normal.

The "normal" pigweed did it's thing, and most were about knee to mid thigh high - which was normal for my garden.  I think pigweed are potassium, iron and magnesium accumulators, btw.

The "cultivated" pigweeds, which had been planted much earlier than they could have started on their own outside - those grew 6-7 feet tall. And had leaves bigger than my hands, and I have large hands.

It basically behaved like any cultivated leaf amaranth when treated that way.

Oh, and we did eventually get the Palmer's one in our garden, too.  It still tasted the same, so I'm not about to demonize it for developing resistance to chemicals that I don't use, nor want exposure to, anyhow.

Kim Goodwin wrote:  It's stronger tasting than spinach, so we usually mixed it with a sweet kale or collard for things like the Indian dish, saag, for example.

.....Oh, and we did eventually get the Palmer's one in our garden, too.  It still tasted the same, so I'm not about to demonize it for developing resistance to chemicals that I don't use, nor want exposure to, anyhow.

Yes, the resistance to chemical herbicides likely arose naturally and should not affect the edibility of the plant otherwise.  Pigweed seems to be the "gift that keeps on giving".  Since we don't weed the garden after a certain point, taking care not to weed out lambsquarters and pigweed anyway, the garden become blanketed with the stuff.  We too have used it in Indian 'saag' as other have here....great nutrition and a great way to use it!   Do you use it after it has set flowers/seeds?.....seems quite a bit less palatable then.

posted 3 years ago
Regarding using it after it flowers or sets seed....

Totally agree.  We always picked before it flowers, or just as it is starting to, but not later.  The leaves get tough.  We also like it better than lambsquarters.  Lambsquarters don''t totally agree with me.

I love your "gift that keeps on giving" comment.   Very cute.  It sure it though.  That is one tough plant.  Pigweed and tomatillos are the things that once established in the garden, they just never stopped.  Thankfully they are easy to weed.  Interestingly- in the very early stages those two plants look a lot alike....

posted 3 years ago
Oh my goodness!  I saw this thread a few days back, and just today--by accident when I brushed up against the sharp bracts--realized that the big plant near the rain barrel is this Palmer stuff.  There used to be a bird feeder there, and we have various grains come up there from time to time.  I generally enjoy the novelty and leave them for the birds; however, I don't want this stuff reseeding in my suburban back yard/garden!  I've previously seen it only on crop land.  I cut it down with pruners.

Thanks so much Deb, John, and Kim!
Christoph Day
Posts: 14
Location: Talakag/Bukidnon/Mindanao/Philippines
3
I like...

posted 3 years ago
Here on the Philippines they sell this on the market for vegetable soup with or without cococream (I call it cococream because what you buy as coconut milk is made of the presscake/extraction grates, a byproduct in making virgin coconut oil, coco cream is made of fresh unprocessed coconut meat).

When I was renting a room in a subdivision in Cagayan de Oro, the Pigweed grew together with Jute, Guava, Moringa and Sweet Potato on lots without buildings. I collected leaves of the fore mentioned plants frequently to make smoothies together with the water of Young Coconut, Banana, Lemonsito, Ginger, Chili Pepper and other fruits.

The pigweed was not invasive on this place. On my farm 50km inland on around 650m above sea-level, my wife even had to plant it. It was growing to 4'+. As of now it didn't multiply by itself.

I want to plant Amarant on my farm because I have red (in "Die Kulturpflanzen der Tropen und Subtropen" that it grows on poor soil and it accumulates Calcium and Phosphorus. This would then also serve as green Manure for Velvet Bean 'Mucuna bracteata', which can create a 1' layer of organic matter in 3 years, which is then attracting beneficial fungy and microorganisms.
Ryan M Miller
pollinator
Posts: 312
Location: Dayton, Ohio
87
I like...

posted 2 years ago
I plan on growing some wild Amaranth I found in Steubenville this year. I originally thought it was either A. hybridus or A. retroflexus, but I wouldnt be surprised if Palmer amaranth had spread to Jefferson county in eastern Ohio by 2018 when I found it. I don't know how well the tiny black seeds will pop though. Here is a link to the distribution of various amaranth species in the US as of 2014 from BONAP:
http://bonap.net/Napa/TaxonMaps/Genus/County/Amaranthus
515FD754-7A6E-4E11-97DC-812D564D6284.jpeg
464CDC4A-07C0-499F-AFFC-4CE29F30F8FE.jpeg 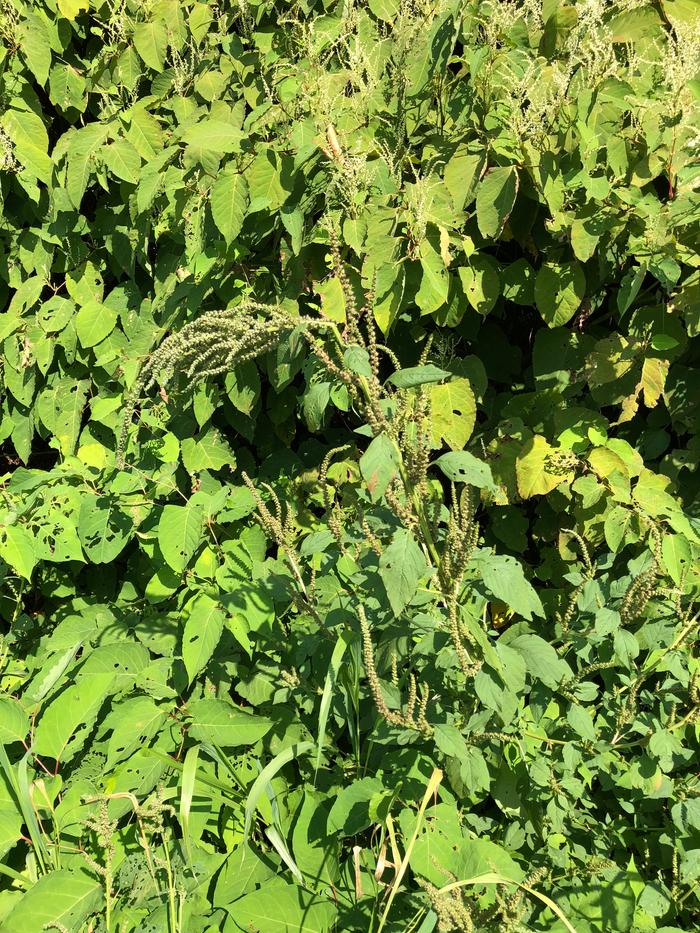