charles c. johnson
Posts: 369
posted 9 years ago
I want to use these 3 things. Will some one will shoot holesin this before i waste money.  thanks for your in put
winch-plow.JPG 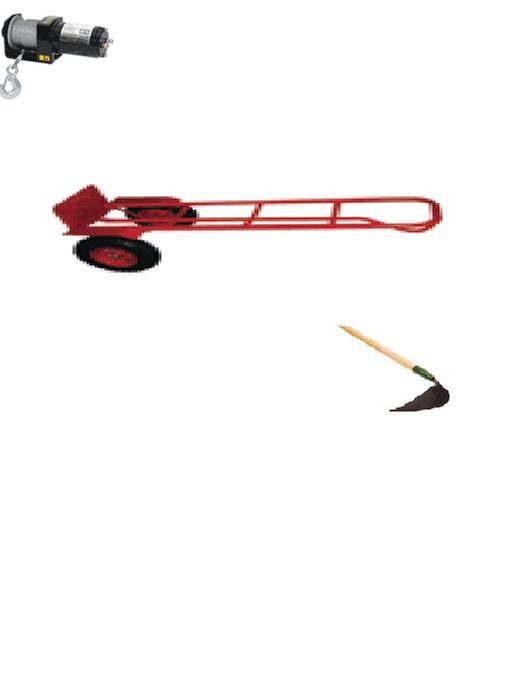 Shawn Bell
Posts: 156
posted 9 years ago
That is a great idea!  I wish that I had thought of that.

But I thought plowing was "bad"?

You could always use this contraption dressed in a leather jacket and a motorcycle helmet with a face shield.

Posts: 0
3
posted 9 years ago
Winch safety dictates that you are never in line with the cable when operating the winch.

Maximum speed on many of these small winches is something like 10 feet per minute at no load, gets slow as it works harder.

Current draw may be a factor depending on your power source; 30 amps to pull 500 lbs is common, more for heavier pull.

If you go for this try and get a winch with a free spool clutch. That means you can flip a lever and hand pull the cable back out. The real cheap ones may not have this; makes it a pita to have to power the cable out.

If yoi mount the winch stationary then you'll need a helper to run the winch. If the winch was moving with the operator there's the problem of power supply.

charles c. johnson
Posts: 369
posted 9 years ago
I was thinking the wench should be mounted to the base of the hand truck.The hand plow on the under side so the handle will keep me from going to deep. Sense it won't be safe to sit on i thought i should strap cinder block on it. I think i'm going to power it with an extention cord.

Posts: 105
posted 9 years ago
Mechanical disaster in your future.

2k pound winch will destroy that dolly and the plow if it hangs on anything.

2k is also way beyond a hand plow's capacity.

Grab a pick and shovel and git er done and remember tools serve a purpose, they can be modified within limits, but they do have limits.

The comments about not being inline with the winch cable are spot on, however add a 30 degree angle to each side as odds are whatever breaks will not break straight and clean and flying metal things are going to head the opposite direction of breakage not just cable pull.

A quick google of winch failures, cable failures, tow strap failures should be adequate to convince you this is a really bad idea.

Posts: 70
posted 9 years ago
Your basic idea is a good one! When I first read your post I jumped up and grabbed an old farming book, because I have seen a system like this before. John Fowler was the first one to develop a cable pulled plow, in 1852. He used a stationary steam engine to wind a cable, and thus pull a plow through a field.

I'm sure some adaptation of your design and some research into Fowler's system could yield you a usable prototype:

Be careful, and post results! I think your idea has some great potential!

Garry Hoddinott
Posts: 75
posted 8 years ago
PERFECT! I have been thinking of such a thing for some time and a search for "winch powered plow" revealed this forum/thread.

I was thinking of welding up a wheeled gadget, with a frame that could be tilted back and a handful of ripping tines attached but I love your idea of just using an old anchor and a trolley.

I can see no problem at all if you attach the winch to a tree (or some fixed frame) and roll your plow away from the winch. The cable is being pulled very slowly by the kind of winches I've seen and though the cable is under some pressure i doubt that the cable can touch the operator if they are standing on the plow side of the beast. I imagine the contraption would be pulled over the plow if it got stuck under a tree root or similar giving the operator time to use the remote to shut off the plow.

On the "WHY PLOW" question I have recently heard an Australian Darren Doherty speaking about Keyline systems being used in combination with cell grazing (daily movement of herbivores). He asserted that soil depth can be increased by 18" over 3 seasons which he explained was as Autumn / Spring / Autumn. 18" that is bloody amazing. I've studied Keyline - developed by an Austalian in the 1940's

It's a 2 way action. First their is lots off carbonaceous stuff and manure added to the soil and second the hard subsoil is loosened and brought to life. The Keyline plow cuts a 1/2" slit in the surface of the ground and the arrow head device that gets sunk down to the required plowing depth shakes and loosens the soil. This enables air, water and light to penetrate the surface, enlivening the soil critters, allowing root penetration.

Darren explained that when the animals eat the grass the plant sheds a bulk of its root system. This then becomes soil fauna food, decays, and thus opens more pathways for air/water penetration of the siol. I had previously heard of 4" of soil depth in a year but 18" is staggering.

A bulk of the property I'm considering buying is stony land with only the pioneer species of scrubby hardy quite useless plants colonizing it.

My question relates to how long I can expect a fully charged battery to be able to deliver the appropriate amperage at this load? Or translated ... how many hours (minutes) of plowing could I get out of 2 fully charged 440 amp/h lead acid batteries.
Rick Larson
Posts: 210
Location: Manitowoc WI USA Zone 5
posted 8 years ago
I don't know. It might be more work getting the whole thing going. I had the same line of roots situation, so I build a hugelkultur on it instead of fighting it. Been doing everything by hand, a little here, a little there, overtime much gets done. It is simple and more relaxing not to have to rely on mechanization when you really don't need it. Otherwise, good luck on this experiment!