Benefits Of Garlic ; is though to have originated from central Asia, but the origin of the plant is difficult to trace and other writers such as De Canolle (2006) in his Origin of Plants claims that garlic originated in the southwest of Siberia, whence it spread to southern Europe.

Garlic is now found growing wild in most Mediterranean countries and where it has a long historical association.

The ancient Greeks placed garlic on the piles of stones at the cross roads as a supper for Hecate, the Greek Goddess of cross roads, while the Egyptians invocated as deities at the taking of vows.

Roman soldiers and slaves were often fed garlic although historical manuscripts record a general dislike to the smell which was accounted a sign of rudeness.

It has a higher concentration of sulfur compounds than any other Allium species which are responsible both for garlic’s pungent odor and many of its medicinal effects.

One of the most biologically active compounds in garlic is allicin (diallyl thiosulfinate or diallyldisulfide). The most abundant sulfur compound in garlic is alliin (Sallylcysteine sulfoxide), which is present at 10 and 30 mg/g in fresh and dry garlic, respectively (Lawson, 1998).

Typical garlic food preparation such as chopping, mincing and crushing disturbs S-allyl cysteine sulfoxide and exposed it to the allinase enzymes, then quickly converted it to diallyl thiosulfinate, which give off garlic’s characteristic aroma.

The allinase enzyme responsible for diallyl thiosulfanate conversion becomes inactivated below a pH of 3.5 or with heating .

Although allicin is considered the major antioxidant and scavenging compound, recent studies showing that other compounds may play stronger roles; such as polar compounds of phenolic and steroidal origin, which offer various pharmacological properties without odor and are also heat stable.

How To Make Garlic Oil?

Smash and peel cloves of Garlic.
Transfer to a medium pot, add olive oil, and heat over medium-low until bubbles form around garlic, 3 minutes.
Let cook 10 minutes, reducing heat to low if garlic begins to brown. Remove from heat and let cool to room temperature.

posted 3 years ago
Hi aly
Are you making garlic oil for the taste or to preserve the garlic?  I grew garlic this season and have about 120 bulbs and not enough friends to unload it upon.  I'm looking for ways to preserve it.  Nice info.
Kevin

Forgiveness is easier to obtain than permission


Kevin Derheimer wrote:I grew garlic this season and have about 120 bulbs and not enough friends to unload it upon.  I'm looking for ways to preserve it.


You could probably shred it and freeze it, but I've never done that since I go through mine really fast. Aside from that, I know for certain I'd be making humus, pesto and extra garlicy tomato sauces and freeze those if I did have that much abundance.

As an inquiry, many people try raw garlic topically and that ends up with very bad results as it's usually left on too long and causes burns. I learned that lesson after a 20 minute application a couple years ago. I still use it topically, but only for a minute or 2 at a time.

Does garlic oil or a tincture have similar effects to raw topical use? or does the oil reduce the effects of garlic too much for topical treatment?

Hope it's not too naive of a question, I haven't began using tinctures much.

posted 3 years ago
Kevin, how about fermenting the garlic with herbs and a simple sea-salt brine.  It would be great to eat on a salad or with roasted meat.  Here is a link to a recipe that looks pretty good.  Also, I've noticed a lot of Kimchi lately, garlic would be a nice addition.

Kevin Derheimer wrote:  I'm looking for ways to preserve it.

Hello Kevin, dehydrating garlic is a great way to preserve your crop - small cloves can be crushed in the garlic press without bothering to peel and the larger cloves sliced thinly and dehydrated. Spread the crushed garlic in a thin layer over a sheet of baking paper before putting into the dehydrator and when dry crush between two flexible chopping boards into granular form  It will retain its flavour better if you only turn it into powder just before you use it - I just use the mortar and pestle to turn it into powder. I also pickle peeled, whole cloves in homemade apple vinegar with raw honey. Best to use a clip top jar and remember to open the jar every other day, don't overfill the jar as the vinegar will continue to ferment and you'll end up with an explosive mess. In addition to Scott's suggestion of kimchi, sliced garlic in sauerkraut is delicious. If you like hot food, aly's chili oil with finely sliced chilis is great - I heat the oil first, take it off the heat, add the finely chopped garlic and stir until the garlic pieces aren't clumped together then return to a low heat and cook until the garlic is lightly cooked before adding the sliced chili's. You can never have too much garlic:)
20161125_210809.jpg 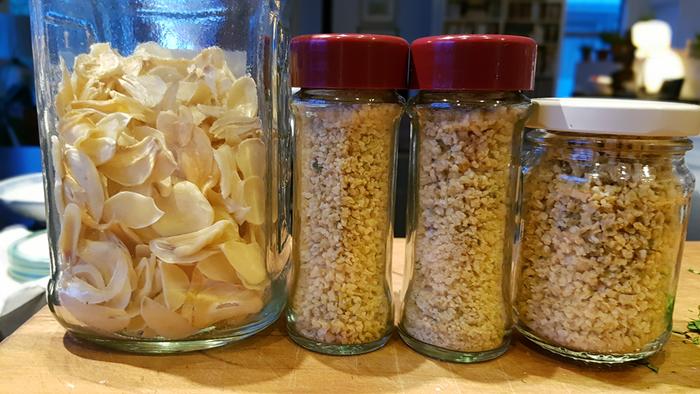 posted 3 years ago
Thanks Scott and Megan, great ideas for me to try, I have tons of garlic to play with!

Forgiveness is easier to obtain than permission

Henry Ikeme
Posts: 49
1
posted 3 years ago
I will prefer drying to garlic oil because the heat will destroy lots of nutrients. Thanks for this inspiring topic. I will start eating garlic.

bob day
pollinator
Posts: 766
Location: Central Virginia USA
66
posted 3 years ago
As your article alludes to, some of the  allicin compounds (and others) are destroyed by heat and also oxygen. For medicinal uses as a topical antibiotic I would use at least twice as much garlic and a cold-cool extraction over a period of a couple weeks.

preparation; I would crush it well, and immerse the crushed garlic immediately in the oil to prevent as much oxidation as possible. More or less fill the vessel with as much garlic as will fit submerged. A cheesecloth over the top will help let moisture escape.

note: I don't always have the money to buy organic olive oil, but generally speaking, look for the words "extra virgin" and "first cold pressed", I have heard that petroleum solvents are sometimes used in the oil extraction process with heat, so the type of olive oil used can make a difference, and the cheaper versions on the grocery shelves are probably not good enough.

Cap and shake the mixture occasionally to prevent stratification.  placing the oil in sunlight will speed the extraction process, but may also sacrifice some of the phyto chemicals. Heat can be used to make a quick version of this but keep the heat low--under 150F.  I often use a potato ricer/press with cheesecloth to get out every last bit of the garlic essence when I filter out the garlic.

Also, Garlic is used in a vinegar preparation with ginger, horseradish, yellow onion, cayenne to make a good/great flu tonic /medicine and an excellent salad dressing. Filter out the herbal debris for a longer term storage,or leave it in for a salad dressing.   I don't think it's possible to have too much on hand.

for direct topical application to burn off warts, slice a 1/4"  cross section, make sure the surrounding skin is coated with oil and if you are using a vegetable oil that will have to be replenished frequently, vaseline will last a little longer, but as was mentioned, be careful, garlic is very powerful stuff. put a bandaid on top of it and remember to look at it often-- twice an hour at first isn't too much, then adjust your checking schedule according to your own tolerance.  I've personally never had problems with it, but for longer term use this could easily be forgotten and lead to a painful burn. As with all home medications, use them consciously, in the case of wart removal most small ones will be gone in a few days, but even that space of time is long enough to forget and leave a poultice on too long.

I've heard of the oil being used directly on a very septic wound as a flushing agent.  One direct experience I heard of was using it immediately on a bad dog bite to successfully ward off infection.

I have heard of a Garlic paste with vaseline being used on the soles of the feet to draw out very serious systemic infection. This is often used in conjunction with the cold sheet treatment. Note the vaseline and not olive oil is specifically used in this application. Vaseline pushes the action to drawing out rather than a vegetable oil which would tend to be absorbed in. I studied this  many years ago so forgive me forgetting the specifics, but there are actually compounds in the garlic that can help relieve stresses on the heart, as well as several other actions that help protect and heal the body while the infection is being drawn out. this is usually done at night while the person is sleeping.  Note that I have heard of people cutting a chicken in half and tying it to the soles of the feet in a similar last ditch- life saving treatment, but I like the idea of garlic a lot more.


Ive also heard raw garlic is good for sexual dysfunction, but i believe it's in the higher consumption range 20-40 cloves /day and both people will probably want to be taking it or you won't be able to get close enough to each other. ;-)