I am incredibly late (like 8ish years) to finding your article Raising Chickens 2.0. I found it during some Pinterest searching: I am preparing to start keeping chickens for the first time. I had some questions and wondered if people in this forum could help.

I live on 15 acres, but 3 are cleared while the rest is heavily wooded. I'm not into the idea of clearing any more. I want chickens but my little homestead is the site of almost every family gathering in my extended family, including weddings, birthday parties, etc., because our little yard is pretty and our native stone home sets a pretty backdrop.

So- for the reason of keeping our yard "pretty" and not having poop all over every surface, I was keen on the idea of a cute permanent coop and a big attached run. Was planning on putting it on a permanent foundation to help predator-proof it, and let the girls out for a few hours a day to "free-range". Until I came across your article, which makes a lot of sense.

I don't love the paddock system idea for a couple reasons: the need for portability already feels like it will require not the prettiest of solutions, and I am not keen on the idea of constantly moving the things.
What if I were to fence a large section of my yard off (maybe a half acre to an acre) and still have a permanent coop where they slept. Would this solve the free ranging issue of stuff all over the yard, without doing too much damage to my scenery? They could free range in this area only during the day and be put up in the coop at night? How long would it take 5-10 chickens to destroy that much vegetation?
Mark Brunnr
gardener

posted 2 years ago
Even with a full acre, if the chickens can access all parts all the time, they will over work certain plants that they like the most, and those plants might not recover enough to survive. Instead of you took 1 acre, and divided it into 4 parts, then had their coop in the center you could give them access to a new quarter each week. Then there would be 3 weeks of recovery before the chickens came back in again.

You could stack some additional function in that area by planting a variety of fruit trees, protect them while they get established, and then let the chickens in to eat spoiled fruit and any bugs that come with it. The chickens will help fertilize for you too. You might also be able to seed a quarter after the chickens move out, and in 3 weeks the seeds sprout and can be new food for the chickens.

You can buy/make a coop that has an elevated floor rather than installing a cement slab. You can move the coop if you want, perhaps you roll it into each 1/4 acre paddock or maybe not, instead you just open a different gate and you leave the coop in a central location. I would personally go for moving the coop, have it on wheels and just pull it into the next paddock after the chickens are out.

That makes a lot of sense. I may do the portable coop and a temporary run at first, until I can afford to do the fencing, because I would want something aesthetically pleasing.
Next question- how does all of this work in the winter when there isn't vegetation?

I second the portable coop thing. It's what I do and I have two 100ft sections of portable electric net style fence that moves around with it. It's pretty easy to move. I've attached a picture to show what the fence looks like. I don't think this kind of fence is ugly, perhaps you'll find it aesthetically acceptable. My coop is in the background and it's on skids, but is heavy and requires an automobile to drag it to new locations, which is no real inconvenience for me with my pickup truck. Sometimes in the winter it freezes to the ground tho and I have often considered attaching wheels to my coop, but have never gotten around to it. In the winter, my birds still peck and scratch and nibble on what's still green in the yard. Hope this helps!
DSC_0040.jpg 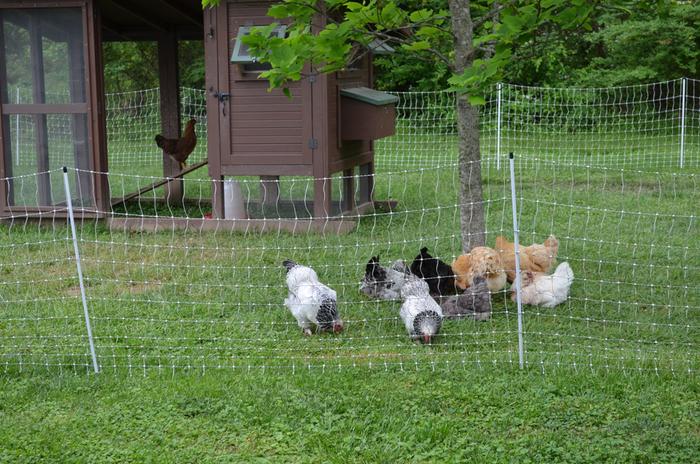 posted 2 years ago
Another method that works well is to create a perimeter fence, then use electric net fencing to keep the chickens out of a part of the fenced in area.
Most of the electro net comes in 100 or 300 foot sections so you can probably get away with just one 300 foot setup.
Instead of having to move the coop you just funnel the chooks to the area you are allowing them to have for that period of time.
It is sort of a reverse paddock system.

This way you can have your beautiful, permanent coop and move the chooks on any schedule you want to use.

posted 2 years ago
I like the suggestions coming out of this thread.

Your traditional coop and run idea can be used, if large enough, and divvied up with electronet fencing as Redhawk suggests. You could have a more free-form run area, if this works for you, enriching more of the area around the coop, should you need to keep it in one place.

Personally, if I had an acre for chickens, I would do it with a mobile coop, albeit a large one. I like the idea of designing it for storage of the electronet fencing and whatever infrastructure it requires, such that all I have to do in the morning is move the coop and park it, and then drop the posts around the coop.

I think there are several techniques available to provide healthier supplemental feed to your chickens than just commercial feed, even in the winter, when you may get nothing. Fermenting grains in buckets or growing sprouts on trays comes to mind, and there's always your own food scraps. You can even include insect production in the mix, should your waste stream warrant it.

In winter, I have often seen hoop row covers suggested for sheltered outside access, usually on otherwise bare-dirt areas. Winter feed could be thrown in there, and instead of creating a dead-zone area some colloquially call a sacrificial paddock, their manure enriches next season's garden bed. The mobile coop could be situated on one end of the tunnel, connected to it.

Incidentally, you could take styling cues from the tiny house movement to make your mobile coop aesthetically pleasing. If you really like the way your house looks, you could mimic its architectural style down to colour and trim. You could just work in the same colour palette, or you could choose a contrasting design aesthetic that you think works well in the space.

There's nothing saying you can't have an attractive mobile coop you can brag about. Keep in mind that in many cases, because you're building something relatively small, you can reclaim the best bits of a tear-down project (lets say someone in your neighbourhood is re-roofing their slate, cedar shingle, or clay tile roof) and put them to your use. That way, your coop can genuinely reflect the character of the area.

In any case, keep us posted as to what you do, and let us see pictures, if you don't mind. Keep it up, and good luck.