Kyler Lowrimore
Posts: 33
1
posted 1 year ago
So it has taken about 2 years since the idea of one was mentioned to me. Ever since I have been researching and reading up all I can. I went out and got the Rocket Mass Heater builders guide which let me tell you is the best. I have undergone so many trial and errors. Many revisions on where and how I wanted to do my heater. I first wanted to do 6 in then decided on 8 for a few reasons. My house is about 1400sq ft. two stories. I still have yet to put in cob but that is literally all that is left and it scares me the most. I have made many test bricks and found one that seems pretty tough so im just going to go with it. I know il get some words about having too many turns and elbows but its about 20ft+25ft worth of 90° angles. The chimney is about 25ft tall and with everything sealed it has a pretty great draft. Pulls paper down the tunnel pretty easily with no heat. Anyways I just thought id share some pictures before I cob everything since I have had a lot of help from you guys in this forum and it has been very much appreciated by me ☺
20180228_221730.jpg 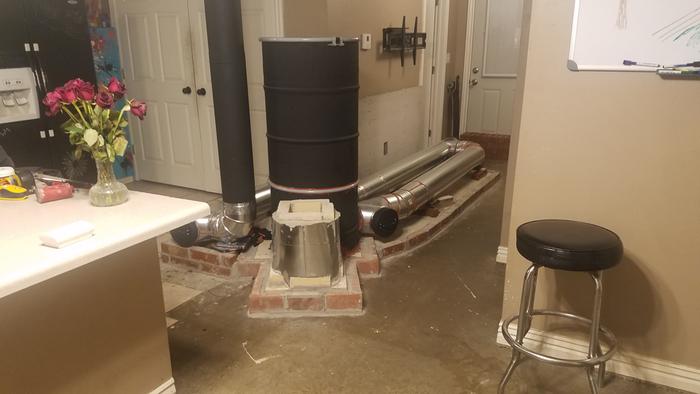 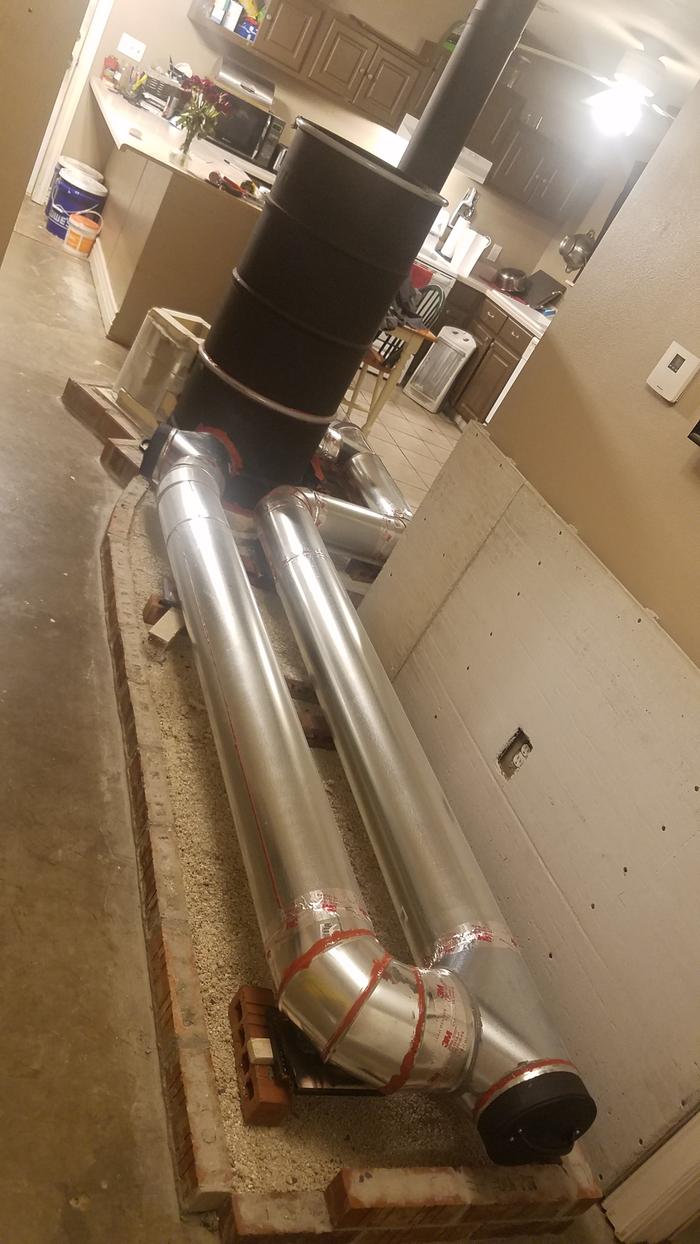 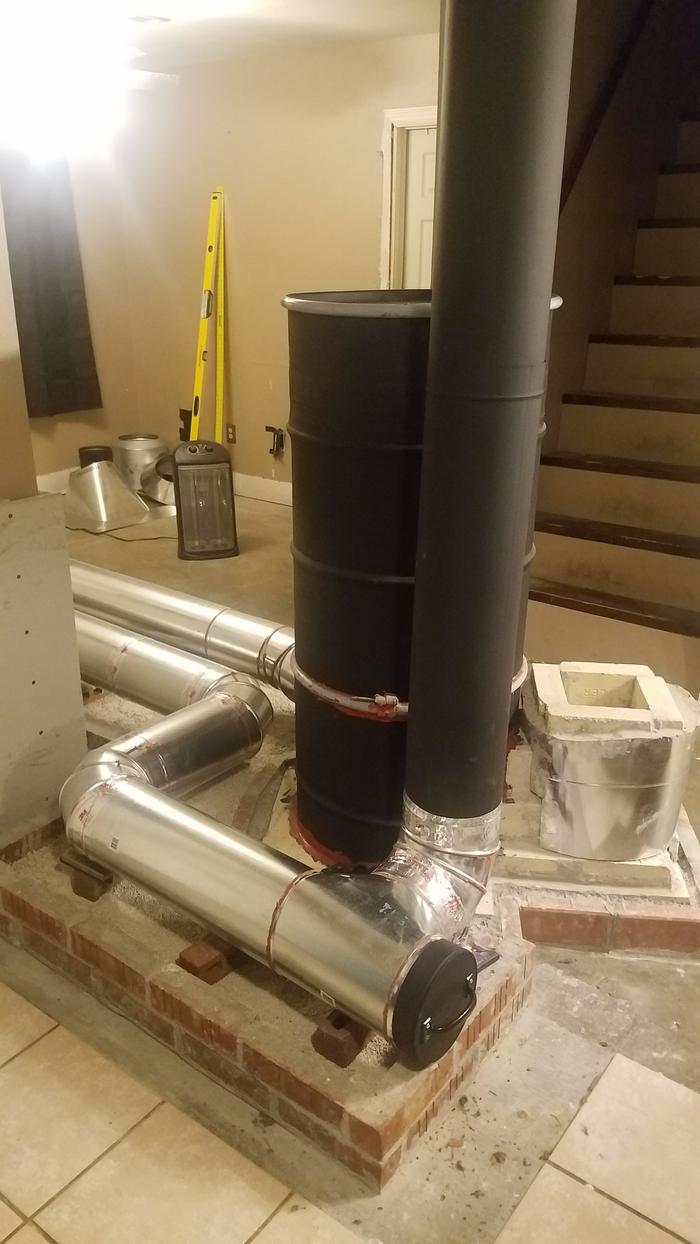 Posts: 3024
Location: Upstate NY, zone 5
137
posted 1 year ago
Nice job! The only thing I would do differently, given the loops of duct format, is to make that jog with two 45 degree elbows instead of two 90s, for less flow restriction and easier cleaning reach. But if you have good strong draft, you should be fine. This system is on a concrete slab, right? What kind of insulation do you have under the ducts and core, to keep from heating the earth and possibly overheating the supporting structure?
Glenn Herbert
gardener

Posts: 3024
Location: Upstate NY, zone 5
137
posted 1 year ago
Also, cobbing is easy (a lot of work, but not much you can really mess up.) Putting a lot of stones in the cob once you have covered the ducts will reduce the amount of cob you need to mix, and increase the heat storage capacity a bit as the stone will be denser. Just keep the stones back an inch or two from the exposed face unless you want to bring them all the way out to be exposed in the finished surface.
Kyler Lowrimore
Posts: 33
1
posted 1 year ago
Yeah I was initially planning on taking out the last two 90° turns and making it less restrictive like you mentioned but after adding up all the turns and length it came to 45ft and from what I read a 8in can go 55ft. Plus every 10-15ft of chimney adds about 5ft of extra length I can add so I just figured keeping it at 45ft would give me optimal draft. I wanted to keep it somewhat restricting so the exhaust wouldn't just fly out the chimney too fast so it has more time to release the heat into my mass considering how short it is. Hopefully it works like I planned but only time will tell.

Under the mass I have about 2 1/2 inches of clay stabalized perlite and all around the riser about 3inches of it.

The only reason im worried about the cob is because my soil seems to be a bit silty. I did a soil test in a jar and it really showed no different layers like I was expecting. I did a few test bricks and found 1 soil to 1 sand and 1/4 of clay slip made the strongest bricks so I think it may work.
Kyler Lowrimore
Posts: 33
1
posted 1 year ago
Oh and yes I got lucky and the house was built on a concrete slab! 😃
Kyler Lowrimore
Posts: 33
1
posted 1 year ago
Also im assuming if it's drafting fine now without and actual fire that once I start burning it will only get stronger right?
Glenn Herbert
gardener

Posts: 3024
Location: Upstate NY, zone 5
137
posted 1 year ago
I expect so. My RMH draws slightly when stone cold, and strongly with a fire in it.

If you use straw in your outer layers of cob, it should hold together well enough. I would put a substantial finish layer of lime plaster on it rather than attempting earthen plaster.
Kyler Lowrimore
Posts: 33
1
posted 1 year ago
I really appriciate your advice Glenn, on all my posts you've been the one to help steer me in the right direction. I will probably put just a little hay in the middle and then use more in the outer layers and just wait until it dries and get it all plastered in with the lime in it! Hopefully after that il be good to go haha im putting a much larger version of this heater in my shop. I think either 10-12inch should be good
Eric Hammond
Posts: 307
Location: SW Missouri
46
I like...

posted 1 year ago
That looks awesome. I think the location to the staircase looks great too. Good job.
Kyler Lowrimore
Posts: 33
1
posted 1 year ago
Thank you! It looks a lot smaller in pictures but I plan to get a quote on taking out the staircase and putting up a spiral that will open up the downstairs area x10.
Eric Hammond
Posts: 307
Location: SW Missouri
46
I like...

posted 1 year ago
Any updates for a finished product? I'm curious how it turned out.
Kyler Lowrimore
Posts: 33
1
posted 1 year ago
Okay everyone im back and in action. Sorry for the trail off, but im here to update on the current situation. I cobbed everything about halfway through and by then the weather started to warm up and I had to put a hold on the project but as it is that time again and winter is almost upon us I have started back up and plan to finish the cob this week. My previous progress including me cobbing out the whole layout about halfway up just over the pipes.

After I cobbed everything I burned in it occasionally for a few weeks but had some smoke leak issues. I turned off the lights while burning and shinned a light around the heater and noticed the whole area had sort of a fog to it. I did notice some leakage through the top lid of the barrel then I proceeded to remove the gasket I glued in and just sealed it dry with no gasket and it seemed to hold fine.Then I came to the conclusion that it could have well been the paint curing on my barrel so I let the house air out and just continued. I had used a high temperature spray meant for exhaust manifolds.

Then came the crazy amount of cracking that started going on. Mostly on the thinner areas around the firebox. So I plan to change up my recipe a bit and add some more sand with a tad less clay and fill in all the cracks and add maybe a inch or two extra to the parts that are cracking. Even though the cob is cracked in some placed it is still incredibly rock solid. I can kick/stand on a cracked edge and it doesn't even budge so im going to leave it alone and just fill it in. Next came in the mold which as soon as it dried the mold died off but still I didn't like waking up to a mold covered thing in my house so my next go around im adding a bit of borax to the water mixture. I also noticed a big gap around the barrel where it met the cob..which I understand is normal from the barrel expanding but it could also be that I have too much clay so I will fill in that gap with my new recipe. Fingers crossed.

Needless to say it has had its faults and troubles im still confident im going to make it happen and it will turn out just fine. I will update with more pictures at a later time. Again thank you for all your help!

Kyler Lowrimore
Posts: 33
1
posted 1 year ago
haha Eric thats a weird coincidence. I haven't been back to this forum since the last time I posted and I don't receive any notifications when someone replies to my post. You got curious two days ago and was wondering if anything ever happened and today in my mind I was thinking "I wonder if anyone thinks I caught my house on fire and thats why I haven't said anything. I should probably update my progress."
Malcolm Goodwin
Posts: 1
posted 1 year ago
Dear Friend,

I would as, before you put cob on etc, whether you would consider the following two upgrades to your system.

1. Putting a copper water coil around your inner burn chamber vertical tube to heat the water to you home

2. Creating an air-intake tube from outside your house so that air is not taken from within the house.

Not sure if you are able to do this, or have the will to do them, but it would be relatively easy to do them NOW before enclosing in COB than deciding to do them later.

posted 1 year ago
Hi Malcom;
Welcome to Permies!
Have you built a rocket mass heater yet?
Trying to heat water with a rmh is a very dangerous thing. The freaky high temperatures that a rmh produces will cause water to flash to steam and explode !  Called Boom Squish you never want to experience this... I really recommend you do not try this as an experiment. There is a safe way to heat water with a rmh but it is a stand alone system.
[/youtube]

Adding fresh cold outside air to your rmh is actually not recommended (but has been done many times) it lowers the feed tube temperature and the efficiency of your burn.
Using warmer air from inside your house is the recommended procedure.