Advice cob oven or brick? Can cob be put over brick for insulation?

Virginia Dawnswir
Posts: 3
posted 2 years ago
We are exploring building a cob oven or a brick oven for pizza and bread. Cob was the first choice, but have been talking to some cob oven owners and they all complain about "spalling" especially bad when clay falls into gooey melted mozzarella. I am thinking eithe cob construction, using potters dry clay for a mix that might hold up better. If you have done this, what type of potters clay (I am a potter) and would using builders sand be good? Are there any additives that will make that first layer (inside of dome) stronger?

The other option would be to use fire brick dome or arch. I was wondering if cob with straw could be added over for insulation? Rather than going the fiber insulation route seen in many brick oven articles and videos.

If you are a cob oven user, how many years does the cob oven hold up under say, weekly use?

posted 2 years ago
As someone who has been contemplating some sort of earthen cooking structure for quite some time now (and getting close enough conceptually that I might start altering the back deck this winter), I'm very interested to hear some voices of experience. Has anyone who did run into spalling tried using sodium silicate to stabilise the surface?
Erik Rowberg
Posts: 13
3
posted 2 years ago

Virginia Dawnswir wrote:
The other option would be to use fire brick dome or arch. I was wondering if cob with straw could be added over for insulation? Rather than going the fiber insulation route seen in many brick oven articles and videos.

first about using brick.  You dont have to use firebrick.  I use broken pieces of  regular brick. Even underfired brick, they will only get better with the heat.  it can be faster than you think.  only the last rows of a dome can be tricky.

Insulation.  I am sure i am going to get questions about this.  I use heavy olive oil bottles under the brick floor and cheap wine bottles around the dome. The air in the bottle is the insulation.  Dont seal the bottles!  I mortar them in with 1-2 clay - sawdust mix.  clay straw would be better than clay but try to get as high mix of straw as possible.  straw is the insulation, or air if the straw burns up.

Okay yes cheap wine bottles and beer bottles become maleable at about 600C, but remember your bottles are on the outside not exposed directly to the fire.  It if really stoke up the fire, so the floor for cooking is 500C,  the fire is 600-800c.  the outside of the brick dome never gets above 300C.  maybe if i ran it hotter continuusly it could go up.  The outside of the bottle and clay/sawdust insulation has never gone above 35C when ambient temperature is 25C.  If i throw a cheap bottle IN the fire the bottle slumps.  it does not slump inside the oven away from coals.

I have built 4 this way now and one is been used for a year. 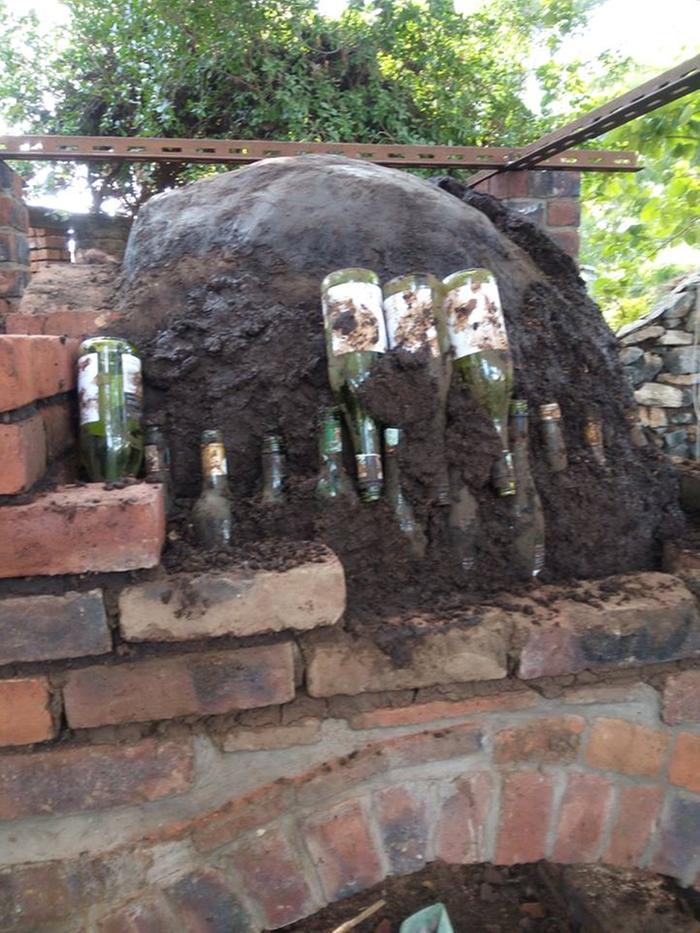 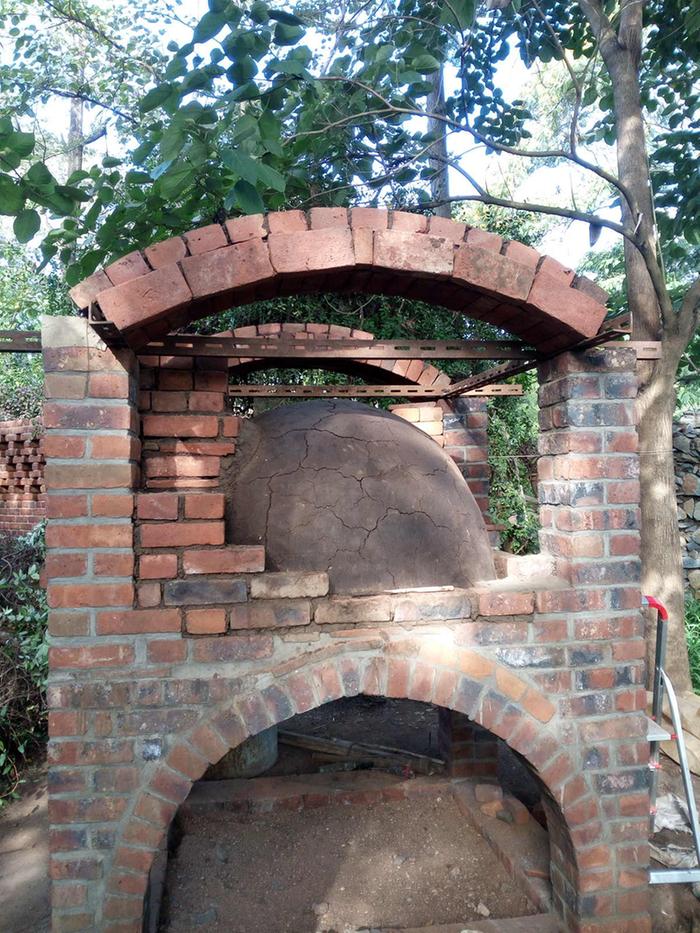 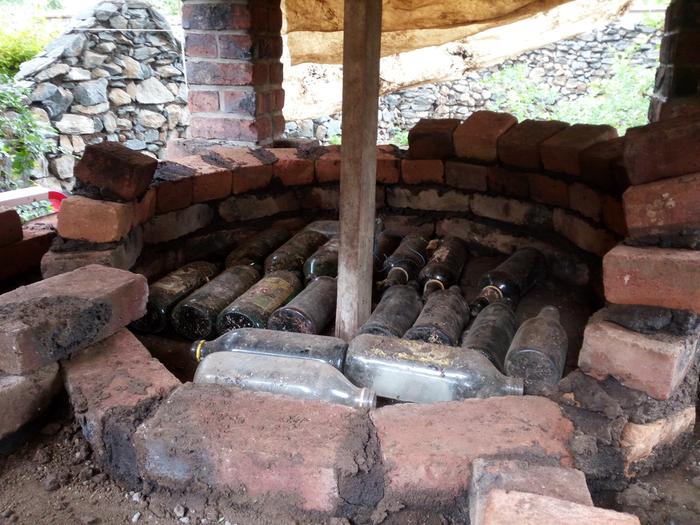 Michael Sohocki
pollinator
Posts: 148
37
posted 2 years ago
I have built three cob ovens, two brick ovens, and several stone ovens. One of the brick ovens is the center of my pizza restaurant in San Antonio, called Il Forno.

In retrospect, the best bang for the buck has been cob with fire brick hearth.

The first ovens, I used a flat limestone, and then saltillo tile in the hearth, both of which resulted in spalling and cracking. Spalling happens to a dense material not built for expansion and contraction.

The mixture of soil in cob is not really very sensitive, and lots of combinations work. You need a portion of clay for plasticity, sand for crystalline structure, and quite a lot of hay or weeds or straw. Use a tarp or kiddy pool, and stomp and crunch all over the straw in the mud mixture to get a good bond.

If your friend's oven dome is spalling, I would guess that they have used too little straw, and/or they fired it too soon, while there was still water in the walls. The function of the straw is to provide interstices that allow for expansion and contraction of small quantities of the clay sand mixture inside the thickness as the material heats and cools. It works incredibly well.

Cob should hold up for a couple of years of steady use.
Eventually it will begin to break down, but they're so easy to build, replacing the dome will take you one whole day every two to four years. And occasionally, they just go on  forever, and if it ain't broke, by god, don't fix it. Putting a roof, as simple as a lean-to of corrugated metal, will keep it out of the rain, because it will melt.

I do not reccomend coating your oven with anything. It is porous, and breathes. If you paint it, or shellac it with stuff, you will have moisture problems. I also don't reccomend making shells of dissimilar material, particulary solid ones, like bottles or bricks fixed directly to each other. This is something I learned building the brick oven, that dissimilar materials expand and contract at different rates. You will have cracking.

If you must insulate your oven, use an interior layer that is not solid, and slips when the dissimilar layers are in the midst of expansion and contraction. Recommended material is vermiculite pellet or very light vermicrete mixture based on vermiculite, but I have also heard of people using ground glass, fiberglass, and other things. An outer shell is then necessary to hold the slip layer inside, choices would include reinforced concrete, or bricks of several kinds. If your oven is outside, skip the expense and complication because it does not serve you very much.

The dome should be at least three inches thick, and up to about five inches is acceptable. More important than insulation is the heat storage properties of the walls, hearth and slab. The thicker your walls and dome, the more heat energy it will retain, but the more heat energy and time you will have to spend getting it there. If you are making 100 pizzas a day, or you are filling up the oven 6 times a day with bread being sold 365 days a year, then the extra thermal mass and expense of insulation makes sense. But if you are just firing up the oven to make a pizza for your buddies on a Saturday night, thinner proportions in every direction will get your oven to firing temperature in less time with a lot less fuel.

In any case, you will know that the dome is properly charged with heat when it lets go of its black soot. There is a point at which that carbon buildup will burn out, leaving the inside of the dome white and clean.

"The Bread Builders" by Daniel Wing will give you more information about materials and physics in building ovens than you ever thought possible.