My yard is a swamp.

Posts: 5
posted 13 years ago
First of all, I think it's great that you deal with peoples' lawn problems of your own volition.  Second, I learned a lot from your Cheap n Lazy article.  I knew there must be a way to do things organically.  Third, my issue:

Just bought this house.  We're in Massachusetts very close to the coast.  It is hot and humid in the summer but it gets a decent frost and apparently snows like crazy in the winter.  I have only been here a couple months so I haven't seen winter.

Our back yard has many bare patches that have been colonized by little hosta-looking weeds that have itty bitty root systems.  I have tried to identify this weed but for some reason "little hosta-looking weed in Massachusetts" doesn't bring much on a Google search.  I've attached some pictures of our place before we bought it... that large bare patch where the men are standing is one of the the low points where the weeds have taken over.  There is also quite a lot of clover and a stringy kind of weed that grows up from one root, then spreads like a vine and peeks up towards the sun.  It actually looks kind of pretty with the grass and if it's harmless I'd just as soon leave it there.

The soil is sandy and rocky, but there is a lot of it.  I was trying to dig out a dandelion root and I got bored digging before I hit either the end of the soil or the bottom of the root.  There are a lot of rocks mixed in the soil though.  The previous owner told me the soil is very salty and the lawn is full of cut worms.  I have seen many little caterpillars in my weeding hours (which have been many) and tons of little round shiny black/brown spheres that must have belonged to something alive...  There are also spiders (teeny white ones) and ants aplenty.

I know you say to water infrequently, but my problem is it rains for weeks at a time around here and I can't keep my lawn dry!  I have to mow once or twice a week when it's rainy because the grass just takes off.  I'd love to choke out the weeds by making the top few inches bone dry but the soil is never, ever dry!

So, my issue is, I'd like to have a lawn... no bare patches.  I've been told by a landscaper-friend to get a yard of soil to level out the yard and eliminate that low point where the swamp loving weeds hang out, and I've been told to plant new grass in the bare areas. 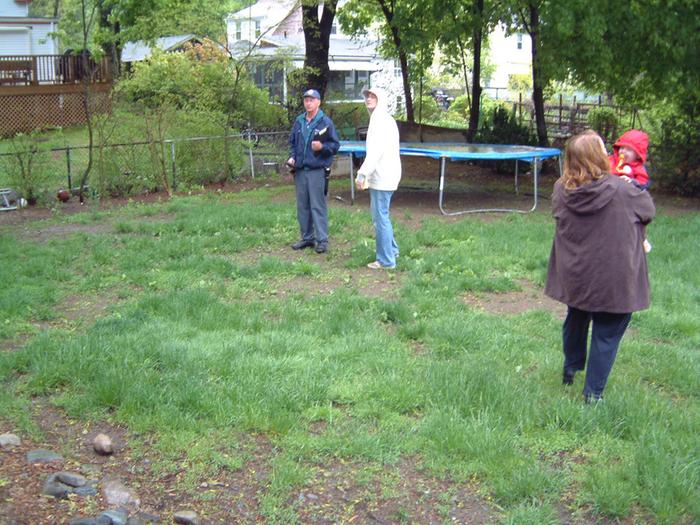 Leah Sattler
Posts: 2603
55
posted 13 years ago
A dry well might work for you. That would be more labor intensive than a load of dirt but I would worry that bring a load of dirt would just push the water somwhere else you don't want it. A dry well is basically just a hole lined with landscape fabric and filled with rock. Wrap the rock bed in the fabric and then put your dirt back on top. It keeps excess water off the surface.

I have drainage problems moreso than dry problems too. what kind of grass are you thinking of planting?

Posts: 5
posted 13 years ago
Hi, thanks for your idea.  I don't mind a bit of labour, I really don't, so maybe a dry well is something I'll try.  I had misgivings about a load of dirt also.  As for what kind of grass, I have no idea.  I picked up a cheap bag of mixed seed (ryegrass, kentucky bluegrass, razor red fescue) but I'm definitely open to other possibilities.  I haven't planted any yet and I still have the receipt.  I like the grass we already have... long skinny blades... but grass seems to grow in clumps around here.  Even people with beautiful yards have bare patches... I want anything that will cover my yard!
Leah Sattler
Posts: 2603
55
posted 13 years ago
That bag of seed ought to get you some quick cover, it may do okay year round depending on where you are located. Alot of  that stuff tends to burn out around here in the summer (oklahoma). Most people use bermuda here. It is great because it is tough, but it can be a serious PIA because you can't freakin kill it! you might consider some sod strips, I have successfully recovered some areas by cutting out narrow strips of sod from good areas (6" wide??) and placing them about a foot apart. in the area needing recovering. But  that is with Bermuda and it spreads really fast with runners. I think with fescue or zoysia you would need to seed or use whole sod squares/rolls.

posted 13 years ago
I think a great question to ask is:  Why is the grass not growing in those patches?  It's as if there is something going on there that kills the grass.  It would be good to know what that is.  If nothing will grow in that spot, throwing new seed there isn't gonna help.

Did the previous owner have dogs?  Lots of times dogs will pee on the same spot over and over and that sorta kills that patch of grass.

Excellent pic, by the way.  That helps a lot!

If you have a low spot, then yeah, it would help to convert it to a little mound which will eventually settle out to level with the rest of the lawn.

The very first step is to set your mower as high as it will go and mow regularly.  With the turf higher, the grass will focus on spreading more and, thus, filling in the gaps.  A little fertilizer (only on the healthy grass - never on the bare spots whcih might be over fertilized already) might help speed this up.

Posts: 5
posted 13 years ago
A few reasons why it might be dead.  One patch was (as you can see) under a trampoline.  It's basically all rocks under there.  Another reason is the shade.  The bare parts are in the shady part of the yard.  Yes, the previous owners had dogs so that could be another reason.

I bought some top soil and compost which I mixed and raked over the bare spots.  I tried to put extra in the low spot but I'm not sure I succeeded in making it level.  I mixed in a bunch of the grass seed and I've been watering every day for about an hour, since it miraculously stopped raining all the time.

I don't know if the bare spots are over fertilized, but the previous owners definitely had a lot of the stuff in their shed, so probably.  I will see if any grass grows this time, and if not I will be back for further advice!  Thanks!
paul wheaton
steward

posted 13 years ago
It sounds like you are taking some good steps.

Here are my thoughts:

1)  trampolines are so fun, it is worth the dead grass.  I especially like sleeping under the stars on a trampoline.  They do make a tent like thing that goes on top of those trampolines that seem like they would be fun.  There are adult things that are comical on a trampoline.  Oh yeah, and sometimes kids like to jump on them.

2)  Back off on the water.  You need just enough water to keep the seeds moist.  If you use too much water, you wash away all the good stuff and leave behind a cement that nothing will grow in.

Posts: 5
posted 13 years ago
Sir, yes sir.  I love trampolines too.  But I have a baby and until he's old enough a trampoline is a liability/grass killers.

I'll lay off the water and watch what happens.
Posts: 2
posted 11 years ago
what did you finally do to solve this problem.  Did you use a dry well and did it work well or did it fill and the problem continued.
Posts: 5
posted 11 years ago
We have re-seeded three times.  We still have a couple (very small) areas where the grass doesn't want to grow, but for the most part our lawn looks fantastic.  We have not done the dry well thing yet, but it's definitely something we're talking about because the water still pools up pretty bad every time it rains, and it rains an awful lot...
Posts: 2
posted 11 years ago
Please let me know if you install a dry well as i hear it is an engineer intensive option and can become very expensive depending on size.  Thanks and have a nice day.
Joel Hollingsworth
pollinator
Posts: 2103
Location: Oakland, CA
9
posted 11 years ago
I just read something written in England, and apparently lawns there have a significant amount of moss in them.  It seems like your climate is moist enough that that could work.

For some of the sparse patches, it might be worth getting a small patch of a moss that grows in your area, pureeing it in a blender with some skim milk, and pouring it where it would do some good. 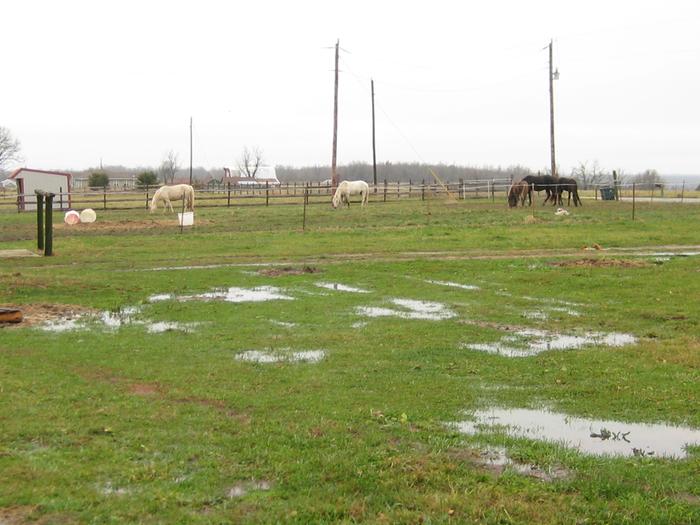 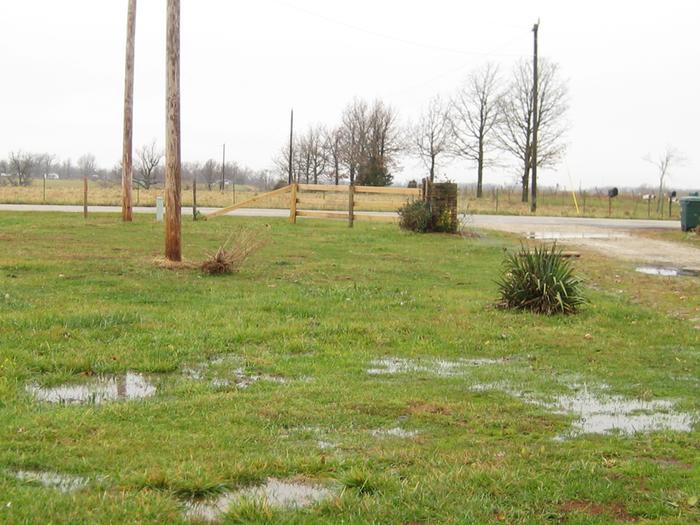