posted 3 years ago
Paul talks about skiddable structures at wheaton labs.  Inspired by this we made a couple and have been testing them out.  Learned lots of stuff.

Now I want to share some photos, I'm wondering which forum would be the best fit for skiddable structures?  I was thinking nomadic housing, but that's mostly housing.  We could change the title of that forum I suppose, to 'nomadic structures' but it doesn't have the same ring and googlelove to it as the current title.

i think it would be good for "homesteading"

posted 3 years ago
No idea...I once built a skiddable building using round poles!  :-)

Paul is definately onto something with this because skiddable structures work well.

My wood shed is skiddable, sitting on cedar logs. Talk about repuposed. It is 13 x 22 feet and was about 500 feet away at my Grandmother's House as a one car garage. I did not have tractor enough to pull the whole building so I cut the building in half and pulled it in two sections, then put them back together later. The wood to build it orginally came from a dismantled barn built in the early 1800's.

The Round Pole Skiddable structure was built as a garage for my brother, but eventually I skidded it about 1000 feet to my place to use as a lambing barn. It has since been replaced, but was still sound when I bulldozed it.

You can skid some really big buildings with relatively small equipment, it just takes more preperation work. The bigger the equipment, the less preperation that needs to be done. Fortunately these can be rented cheap. You cannot afford to pay for a building mover to move a building for you very cheap, but you can jack up the building, put skids under it, then rent a big bulldozer and move the structure in one day for a few hundred bucks. 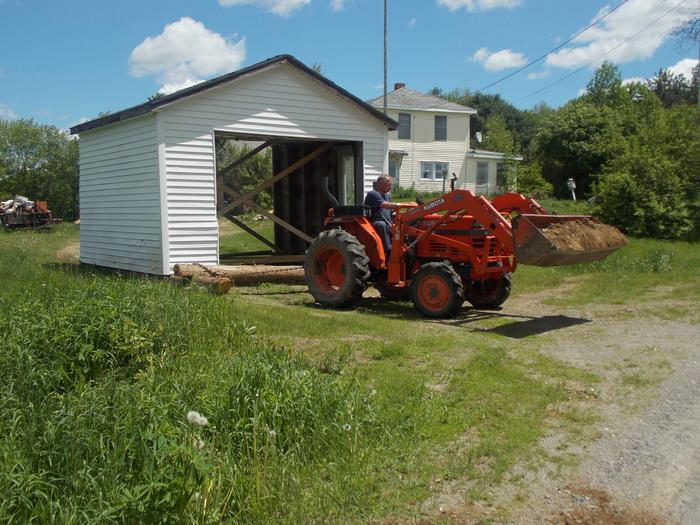 posted 3 years ago
thanks guys.

posted 3 years ago
A friend of mine in Ontario Canada, lives in a house that is placed on round logs and has been moving around there property.
The house was origionaly built by his great great grandfather when he married. When his oldest son was due to get married the house was moved to a new location on the property and the son would build a home for the parents, this has continued, I think the last time the house was moved must be more than 50 years ago though.