posted 4 years ago
We are looking for a forever and ever home for our beautiful and sweet American Guinea Hogs. They are 2 years old and have been raised from 3 months old at our farm. They are very intelligent and sweet, love belly rubs and understand english (of course).
To make a long story very short, we love our pigs like family and we do not take this lightly. We would not let them go, but we are have a dire family medical situation and we must move states to seek medical care, and unfortunately have to let go of our entire farm in order to find necessary medical care. These are amazing girls, their names are Sweet Pea and Petunia. They are UNREGISTERED american guinea hog gilts (they have never been bred) and they have been pastured and fed only organic grains (but to clarify, we will not sell them to someone who will slaughter them).
These girls WORK. Need land cleared? Garden beds made? Tilled? Nasty weeds smashed out? They will do it, and fast. We put them in new paddocks and move them daily as they strip the ground and uproot rocks leaving it ready for raking and planting right after. We also deep bed them in the winter, and then moving them in the summer leaves a huge compost bed to break down and be an incredibly productive garden bed the next year. It is more important to us to find them a forever home than it is to get money for their sale, but some sort of compensation would be nice. Please feel free to contact us with possibilities. We are in Northwest Arkansas. I can happily supply pictures although I am not savvy enough to figure out how to put them on this post :)

posted 4 years ago
We're in Southwest Missouri, and as vegetarians and animal lovers we could definitely say that we would NEVER even consider killing any animal for food, much less a beautiful and intelligent creature like a pig!!! (In fact, we have been looking for a forever home for our 18 ducks because I turn out to be extremely allergic to their eggs and the proteins in their feces and feathers. So much so that I cannot go into their enclosure without severe side effects that could result in anaphylaxis. We have the same stipulation - that they will never be killed for food. Unfortunately, it is hard to find someone who can be trusted not to do that so we are trying to find a solution that will allow us to keep them ourselves. Something along the lines of a hazmat suit for me.

) Anyway, I don't know what my husband would say to having more animals to feed because we already have so many, but I know he has always loved pigs and wanted one for a pet since he was a kid so ... who knows? I'll talk to him about it.

Just so you know, we have plenty of space--75 acres next door to Mark Twain National Forest and the idea of using them to clear garden space sounds great, but we do have several dogs and would have to carefully consider their housing situation first to be sure they would be safe. When will you need to rehome them? What would be the soonest and latest dates?

As for putting up photos here. It's actually very easy. Just save your pictures to an online photo storage place (it's easy to set up an account on Google where you can store them, or you can use a Facebook account or personal website or a million other online storage places -- all free). Get the url for your image on your storage site.  After that all you have to do here is to click on the button that says Img (above the space where you write your message) and when it pops up, copy the url for your photo into the space provided for it. You can preview your post to see if it worked before submitting. I hope that helps. Feel free to ask if you need help.
A Martinez
Posts: 11
I like...

posted 4 years ago
We are also vegetarians so it is really so awesome to hear from someone who is in the same boat as us!!! Sad to hear you became allergic to your ducks, that must be so hard. Wishing you the best on your endeavors in finding them a new home

So the pigs - They really are so special and we love them to death, it is going to be so hard to let them go. Your situation sounds perfect. We use movable fencing and move them almost every day, every other day depending on how fast they break the ground. Electric fencing is a good option, they have been in that as well and understand it. The bigger their area, the less often you will need to move them. We keep them in a small area because we want the ground cleared quickly and that's the best way to do it. The most important things to consider are shade, and water. They are black and they cannot tolerate direct sunlight in the warmer months and they will do whatever they have to in order to find shade, so we always always put a shade roof over their pen. They use a lot of water so an automatic waterer is a great option. They are super cheap to feed, kitchen scraps are a great one, moving them daily supplements what they need, we feed them small amounts of whole grains and alfalfa pellets as well, which they LOVE grains of course. They also love hay and eat hay happily all winter, much cheaper and less fattening than satiating them with grains. We have 4 dogs, and they have been around them plenty. They mostly just ignore the dogs, literally even if the dogs are barking right in their faces. The dogs seem to like them, as well. So I assume they will have no issues getting along with your dogs. They have also been enclosed with chickens with no problems, they mostly ignore the chickens. The chickens love to follow them around and eat bugs as the pigs root the ground.
As far as dates. we can rehome them basically now. The latest dates will probably be sometime in September although we are ironing out the details.
Okay, so my husband has a ton of pics on his phone but he is at work at the moment, once I see him later today I will work on this picture thing.

posted 4 years ago
I'm talking to my husband about them and I will let you know as soon as we decide. The thing is that we have been actively scaling back our animal responsibilities as we've grown older and pigs are going to be a big commitment. I'm researching them a bit to see what they need and if we feel they will be okay here--don't want to take them unless we can give them a great home. Let us think about it throught the weekend and I will get back to you.

posted 4 years ago
Ok great. Yes, I totally understand. Thanks for considering. I will work on getting some pics up, I'm sorry its taking so long.

Well here are some pics, months later. I know it has been so long since i have posted on this thread, I'm doubtful that there's much chance you're still interested but if so that is great.
To anyone else, it is with such a heavy heart that we are trying to find new homes for our sweet girls, but if there is anyone out there who is looking for some wonderful loving creatures to add to your farm, please consider. We are so hopeful that we can find someone who will fit our desires for the future of our pigs.

posted 4 years ago
I can't see the images - can you try again?

(Another way to add an image to your post is to click on the "Attachments" tab below the white text box in the reply page.  For me, I need to export a photo from iPhoto (or, it's just called "Photos" now) and put it into a folder I've called Internet Images.  Then after I click on the Attachments tab, I click on Browse and find the file for my photo.)

This places the photos at the end of your post, with the title/file name visible at the top.  It also gives your photos a home on the internet without using a photo hosting service.  You can collect the URL for the photo by right-clicking, and then you can place it in some other post if you want to, using the [ Img ] button that's at the top of the reply page.

posted 4 years ago
Ok I edited the previous post and now the pictures are visible. Thanks for the advice on how to post pics, much easier. I will put up a video soon

posted 4 years ago
I'm so hoping there is a wonderful farm out there that would like my sweet pigs to be part of it. We have been trying to find a loving home for a while now, and it's becoming discouraging. People back out at the last minute, often. These girls deserve a happy home, a happy life. We are hoping for the best, please contact us if you think you can help. 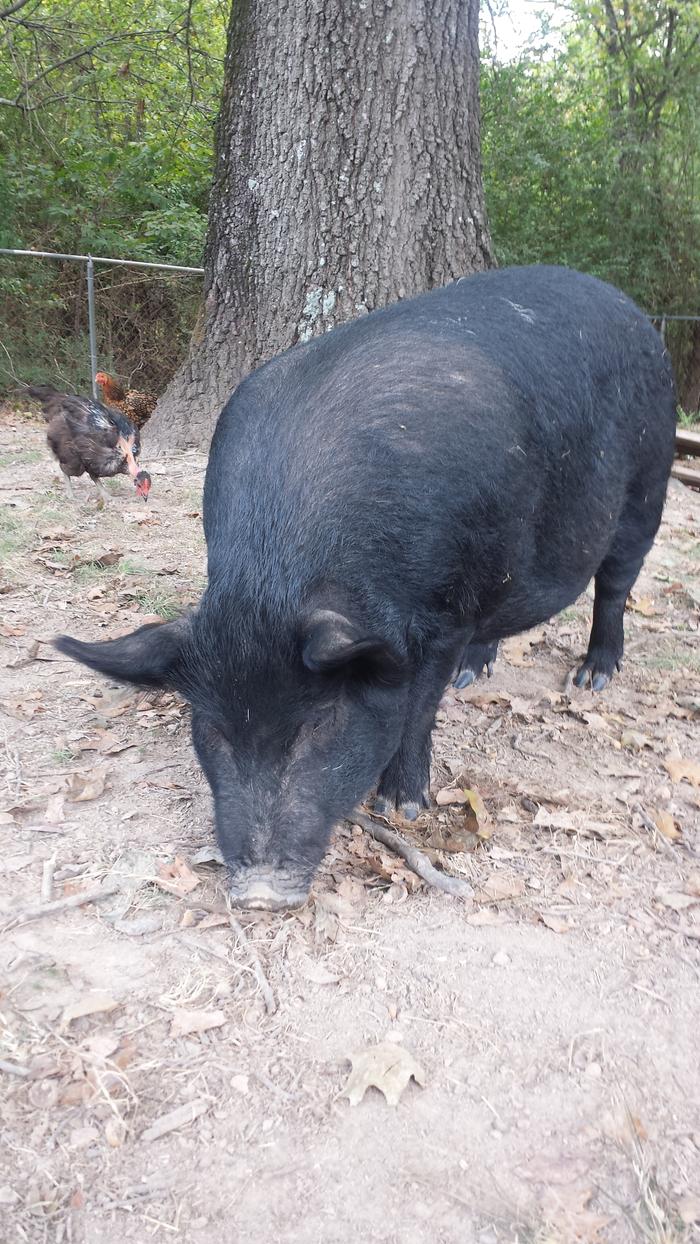