posted 3 years ago
These do not taste anything like i expected. After seeing a mention here and a brief interweb search on how to use them, i planted 2 of them.

Interweb indicated using them in cookies in place of raisins. When i taste the berry, i think i am eating a mild pepper. Not anything like i thought it would be.

Anyone have real world uses for it? I can see mixing it in a salsa. Maybe sugar changes the taste completely, in places you would substitute for raisins?

The plant really took off in its first season(nursery transplant), producing berries. Much quicker than blackberries and asparagus, which take about three years. This makes it a very desirable, quick to harvest perrenial. I planted one close,  and another outside where the deer are. The close up one is 10 times bigger with ftuit. The other one is barely hanging on with lack of water and deer eating it's leaves. Here in tx wirh temps getting close to 100, it's actually impressive that its still alive.

posted 3 years ago
Maybe they sweeten notably when dried?

posted 3 years ago
My interpretation was to substitute them in, as is, in place of raisins.

posted 3 years ago
The only goji berries I've ever eaten were dried - they sold them by the pound at the natural grocer.  They weren't terribly sweet, and drying concentrates sweetness.

posted 3 years ago
The Goji plants I have been growing in my garden for about six or seven years now. There are a fair amount of uses for the various parts of the plant. As you are asking about the berries, I will try to limit to just that for now. You are welcome to message me if you would like some good reference material about uses for other parts of the plant as well. So well here goes...

Adding to water... If you have difficulty drinking water in general due to lack of flavor, try adding a few dried goji berries to a tall glass of water and letting them soak in the refrigerator overnight. The berries flavor the water, and soften the berries making them easier to chew.

This is good for when adding them to salads in addition to tomatoes, as the softened berries have a similar consistency to  very finely sliced tomatoes.

The berries as a decent substitute for raisins, dried berries do indeed concentrate the natural sugars of the berry. Sweeter when dried, I usually just add them with the raisins, as the goji berries enhance the flavor of the raisins and sugars. I have had fun creating a few recipes requiring a little less sugar when using goji berries. One of my favorites is chocolate cookies, when adding chopped figs or chopped dates I add a handful or two of dried goji berries for a large batch of about a couple dozen.

Let me know if this helps. I love my plants. I like to eat the fruits too.
Cheers,
Larry

posted 3 years ago
Looks like i missed the obvious, which is drying them. Thanks to both. Looks like that is how they are sold and they are very expensive.

Uses for other parts would be great.  Posting here would benefit others.

I like the water idea. It's perfect for my current drinking situation which is rainwater. I'm sure it is lacking minerals, which effects the taste. Ive been playing around with little things to add to it with little success.

posted 3 years ago
Mixed with nuts and other dried fruit, they make a really decent trail mix. I usually find raisins to be too sweet for this purpose. I second the call for uses of other parts :)
wayne fajkus
gardener

posted 3 years ago
So far i am impressed with the plant. There are more berries than first appearance. They are tucked under the whole length of a branch, not easily visible. As stated earlier, getting a harvest the first year doesnt happen with a lot of perrenials.

It also appears they are easily dividable. Just dig half of it up and replant. I can see building up a dozen of these, assuming the palatability of the berries. 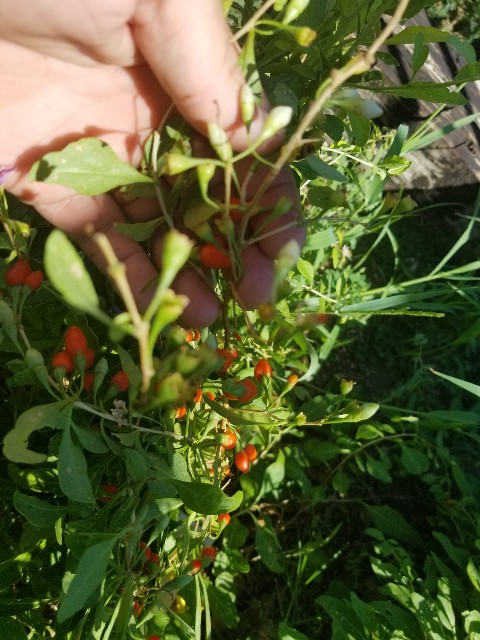 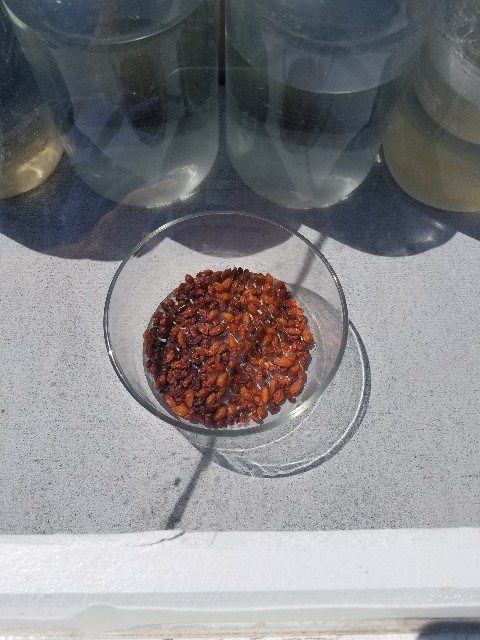 posted 3 years ago
It looks like you are on your way... I am excited that you are learning of the Goji berries and that you are interested in some of the many uses for the plant. I am currently in the middle of a move. You can bank on me carrying some of my potted Goji plants to the new place. The first second third and fourth year new or young leaves of the goji (after rinsing of any bird or bug residue), can be eaten fresh in moderation raw by themselves, a few sprinkled in salads, or cooked in soups and rice dishes as you might spinach, or other leafy herbs. Both young and old growth leaves may be dried as a white tea or green tea respectively, I prefer mine with a drop or two of honey when usuing the older dried leaf. I have also juiced them (in moderatrion of course).

Please note that the older leaves are bigger and  have stronger flavor similar to that of super fresh garden grown raw broccoli. If you are going to juice the leaves, use only a few of the fresh goji leaves added to raw apples or the like.

New growth tips are light green or white in color, tender and can be eaten and cooked similar bracken ferns or fennel heads of baby fern. As first year stalk or cane matures, it will send a second cane in the fall and third cane in late spring the following year. Third year is usually about four or five canes and spread is about four to five feet, in my garden the plants spread a six foot by six foot canopy and also send runners or lateral canes along the ground that send up sucker shoots about every six inches or so. Uses Caution in where you plant goji as they can try to take over the space.  Also note that birds will nest i the overgrowth especially those robins if there is a clean water birdbath nearby  both cats and rabbits hang out in the undergrowth to hide from the heat of the day and potential attacks from would be predatory birds.

After their third year the older goji canes will die back usually by their fourth year and "for sure dead" canes can be composted or used as mulch in the spring.

posted 3 years ago
P.S.> I only pick every third or fourth leaf and only of ever other cane of each plant so that the birds and bugs and cats and dogs and rabbits and opossums have food, shelter, a cool place to sleep, and so that I do not cause the plant to see me as a predator. I also only take from the plant about every 4th or 5th day because I rotate other things into my diet and gives the plant a chance to recover form the stress of me pulling parts like leaves.
Please grow responsibly, and harvest respectfully.
Cheers
Larry