What's this vining plant that sprouted in my garden?

posted 4 years ago
I spotted this growing last year. Now I'm finding it most everywhere: garden beds, under fruit trees, even in potted plants. Maybe it's one of the seed that's in Scratch and Peck grower feed? Or maybe it's something wild I've never seen. Is it edible? Is it native? Is it goign to try to take over everything like bindweed?

The leaves look kind of like bindweed, but the flowers (seeds?) look really different and tiny.

posted 4 years ago
Took some more pictures, this time of the seed/flower things.

(In other news, how do people take pictures with cellphones??? We have an old one that we use for pictures, and I can't keep the dratted thing steady. I'm used to holding a camera against my face and looking through a viewfinder. My face acts almost like a camera stand, helping stabilizing the camera. But, I can't keep a cellphone stable when I have to hold it arms-length to be able to see the screen, and I have to push a button on the screen to take the picture. I miss my viewfinder!!!)
IMG_20180729_130630-1-.jpg 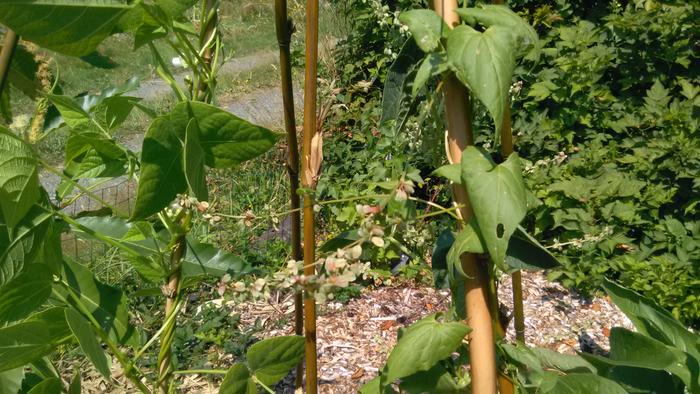 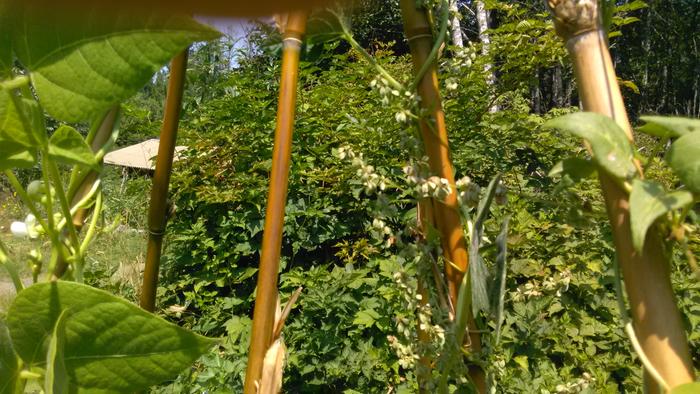 Shalom Eigenheimer
Posts: 61
Location: Down the road and around the bend, Southern Ohio, Zone 6a/6b
4
posted 4 years ago
Newer phones have an autofocus thing.

The leaves do look a lot like bindweed, though not quite; the flowers, however, are way different.

posted 4 years ago
It does look like it belong in the sweet potatoes/morning glory family, that or true yams(but nissind the square stem)

Its evil.  Keep on top of it and don't let it set seed or you'll be fighting it for a long long time.

posted 4 years ago
Yikes - sure looks like bindweed to me too - there are several varieties of it.    As Marco said - DO NOT let it flower and go to seed.   DO NOT yank it out of the ground because that will just stimulate the deep and meandering roots to multiply.

My only encounter with it here on the east coast was in a densely planted flower garden.   The homeowner had been yanking it up every year, thinking it was morning glory.   So after much googling I decided to smother it and use (shhh - don't tell Paul Wheaton - it was before I discovered permies!)  r------p very selectively.    I cut off the end of the vine leaving 12-18", coiled that into a ball close to the ground, and painted it with a small sponge brush.   Covered that with thick cardboard and wood mulch.   That pretty much controlled it for the two years I worked there, with occasional new sprouts coming up in random areas around the half acre yard.
Susan Pruitt
pollinator
Posts: 285
Location: North Carolina, USA Zone 7b
71
I like...

posted 4 years ago
Is this it?

posted 4 years ago
I think you've got it, Susan! It sure looks like black bindweed to me! (Susan's link, which for some reason permies likes to end halfway through.


Many similarities to : the rarer Copse Bindweed (Fallopia dumentorum) which grows up to three times longer at 3m, but the tepals have a wider white margin.

Slight resemblance to : Russian Vine (Fallopia baldschuanica) but that grows to 10m or more climbing vigorously over anything upon which it can obtain purchase, but the flowers are white, plentiful and in showy trusses.

Not a true Bindweed such as those belonging to the Convolvulaceae family like Sea Bindweed (Calstegia soldanella) and others belonging to the Calstegia genus, but has similar Ace-of-Spade shaped leaves, and can also climb, but it also sprawls if it finds nothing to clamber up. Fruit a small dull-black triangular nut on a very short 2mm stalk.

Black Bindweed is a Metallophyte with the potential to absorb 280ppm by weight of copper via the fine roots.

Three previously unknown flavonoids have been isolated from Black Bindweed, Falloconvalin A, Falloconvalin B and Quercetin-3-O-(2-E-sinapoxyl)-glucopyranoside.

It looks like the seeds used to be used like buckwheet, but are really hard to extract and use, so it's fallen out of favor of use (http://www.naturalmedicinalherbs.net/herbs/p/polygonum-convolvulus=black-bindweed.php)


Edible parts of Black Bindweed: Seed - ground into a powder and used as a gruel or mixed with cereals. The seed coat should be removed before use, this has caused mechanical injury to the digestive systems of animals who have eaten the seed. The seed is rather small and fiddly to utilize.

I'm not about to try fiddling with the seeds, so I'll be weeding and destroying this one. It was only in one part of my garden last year, and now it's in at least three places. I don't need it in even more places!!!

posted 4 years ago
Interesting!    I kind of went crazy planting a lot of traditional medicine plants only to discover how invasive and time consuming to process they are (just pruned my prickly horehound today)    It's tempting to try to become a medicine woman but not likely in my "spare time" so I can imagine with two youngsters you sure don't need more stuff to fiddle with  :)