Chris Emerson
Posts: 79
Location: Olympia, Wa
14
posted 2 years ago
Hi, I have started my first sheet Mulch keyhole garden bed. I put it down about 2 weeks ago and will plant winter garlic soon.
A lot of seed is growing out of it right now from the straw. I am curious what others would do.
Is there a good cover crop that won't harm or compete with the garlic bulbs? 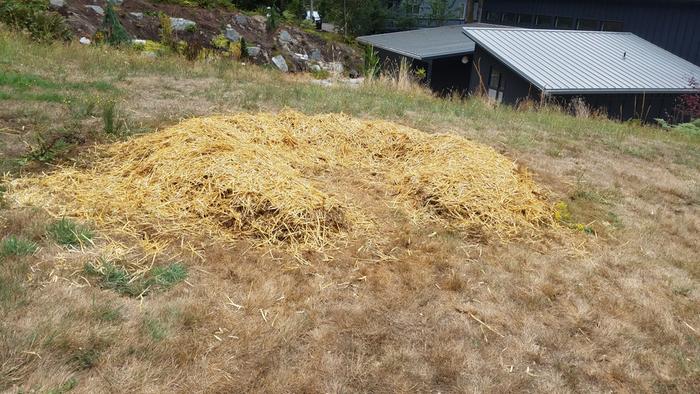 Be the change you wish to see in the world

posted 2 years ago
Not a "cover crop", but come spring, you could plant tomato plants (started indoors several weeks before the last frost) - tomatoes and garlic (and tomatoes and onions) do very well together, as the tomatoes provide shade preventing grass from growing (after getting large enough - will require weeding for the first two months), and the garlic will ward off bugs from the tomatoes (you'll still have to worry about field mice, or else plant so much that both you and them get their share of tomatoes). In my limited experience, the shade from the tomatoes (after growing large enough) prevented new weeds from growing, but the size of the already-in-existence onions didn't seem affected by the shade - I would suspect garlic would do similarly well, but can't be sure.

You could also lay cardboard down where you don't have anything planted, and after planting the garlic (but before it sprouts) put several inches of woodchips over everything (including the garlic, which will push up through the woodchips (but not through cardboard!)).
Some weeds will still work up through the woodchips (but not the cardboard), though, so some weeding is inevitable, but it's be easier to pull them up, I find.
Chris Emerson
Posts: 79
Location: Olympia, Wa
14
posted 2 years ago
https://permies.com/mobile/t/54205/Garlic-friendly-cover-crops

This is a good discussion

Be the change you wish to see in the world