posted 2 years ago
I'm creating a food forest and, inspired by a thread on dead hedges here on Permies, I decided to fence the area from deer with my own dead hedge.  The idea is to create a dead hedge, plant along it with useful trees, and slowly turn it into a living hedge.  I've already encountered a couple issues that have changed my plan, but I thought I could document what I've done so far, and talk about a couple of solutions I have found to small issues.

One thing I encountered immediately is that it's hard to pound a 6 or 7 foot "post" in the ground if your posts are oddly shaped tree branches and various cutoffs, and you're using a sledge hammer.  I realized pretty quickly that it wasn't necessary anyway.  Currently, I'm using posts that are 3 feet or so long and hammering them into the ground about a foot.  I put another taller tree branch right next to a post and weave the branches that make up the walls between posts, so that they hold the taller branch against the post.  The first picture may help explain that.

The next picture shows what my hedge looked like at the beginning.  I made two rows of posts with the posts about 2 feet apart within the rows, and away from each other.  I weave branches sideways in and out of the posts to form a really loose structure, and then just start jamming sticks in.  Some of them are straight up and down, some at 45 degree angles, some nearly horizontal.  In the center between the two rows, I just stick whatever is available.  The great thing I found is that it really doesn't matter how you do it.  Everything gets sort of locked together as you jam more sticks in.  I did find it helpful to step back away from the hedge and just look for holes.  Anywhere the fence seems thin enough to see through, I jam a few more sticks in.

The third picture is just a picture of my attempt at weaving the walls.

The fourth picture shows the hedge starting to get some length to it.  I believe it was thirty feet or so when I took that picture.  A dead hedge can take up a really enormous amount of material.  Only 800 feet or so to go... It's quite a bit longer now, but I wanted to show my humble beginnings.

My initial thought was to plant seedlings directly next to the dead hedge to help support it as the material in the hedge starts to rot down.  The issue I found with that is that it's pretty shaded right next to the hedge is some areas.  As the hedge begins to turn, it will be running east-west, and I can plant right next to it on the south-facing wall.  On the parts that run more north-south, I'm planting a few feet from the dead hedge with my living hedge plants.  You can see some honey locust seedlings a few feet from the dead hedge, and a close-up of an Osage Orange seedling.  I started a hundred or so trees from seed this year, honey locust, osage orange, siberian pea tree, paw paw.  Spring will see me starting 2000 or more.  I still have seeds from those, as well as black locust.  I'll start elderberry, sea berry, autumn olive cuttings from my existing trees.  It's easy enough to start thousands of trees that my living hedge may out-pace the dead hedge.  Dead hedge takes a lot of time and material, so time will tell.

The last picture shows the area I am starting with for my food forest.  A small section has already been cleared and planted as my plant nursery.  I'm clearing it by hand, so it will take time, but for now, I'm clearing an area, removing the weeds, putting down coffee grounds, azomite, sea-90, and wood chips.  I'm okay with it expanding slowly until the area is complete.  Annual gardens will be in this area as well for the next few years until the trees begin to take over, and then the annual gardens will move to a new area.  That's all for now... 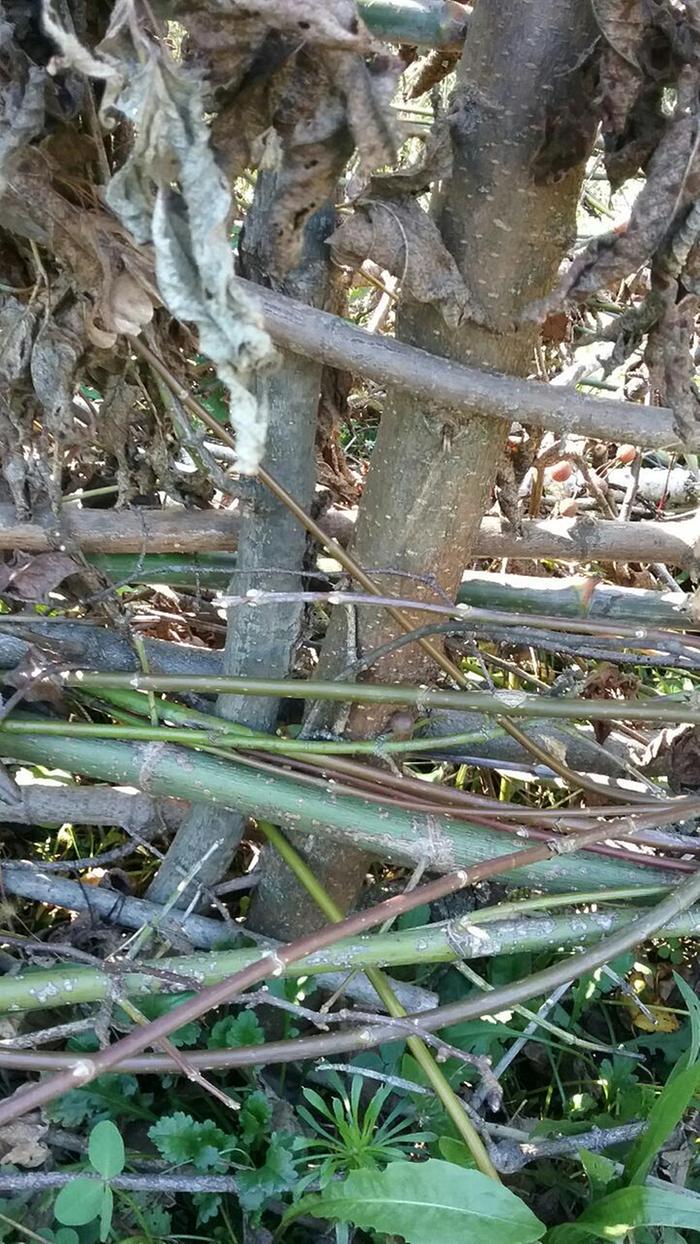 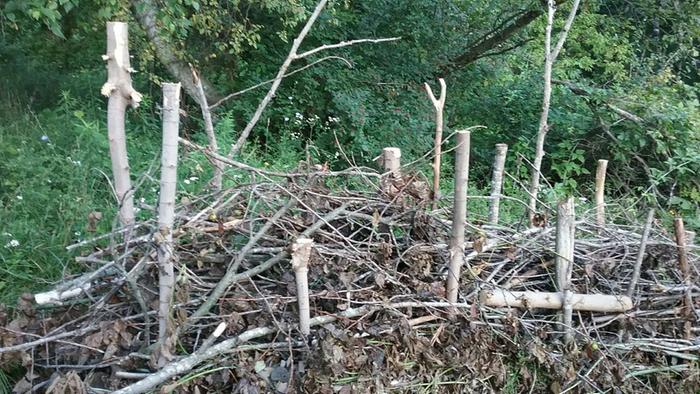 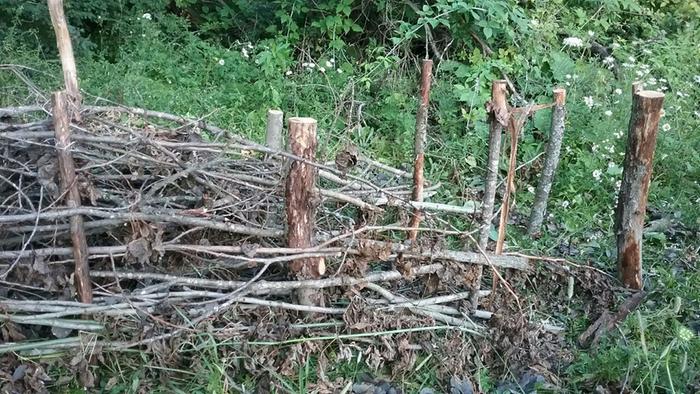 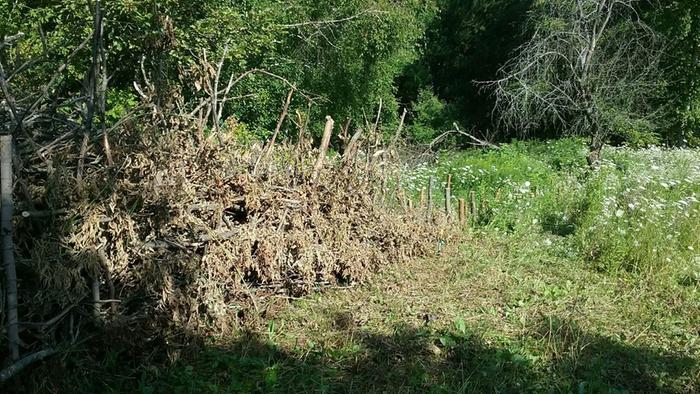 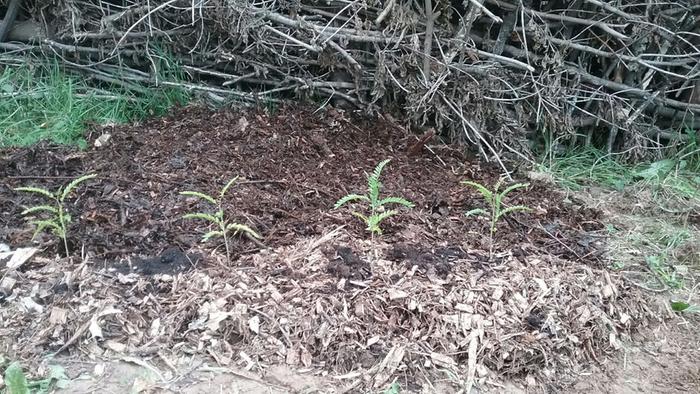 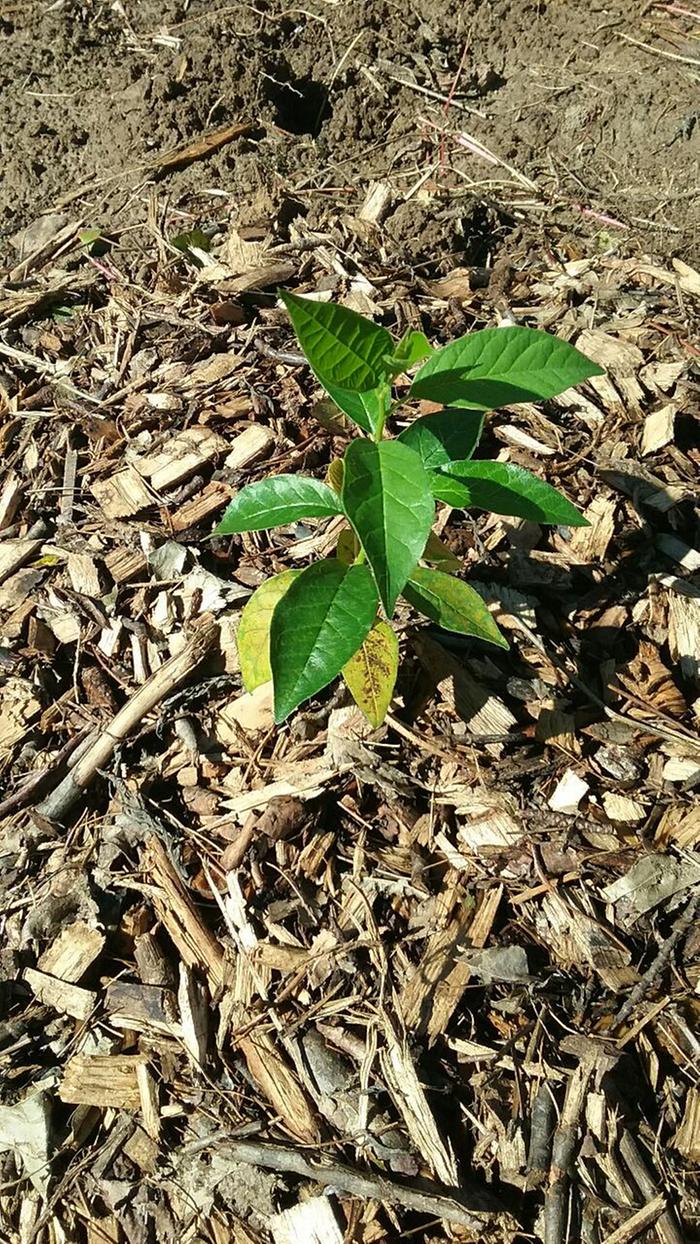 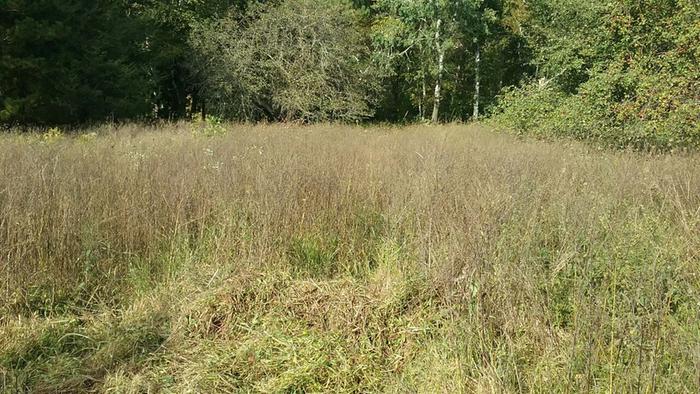 posted 2 years ago
Looking good!  When I tried something similar to contain my sheep I made piles of brush but found they compacted so quickly they didn't provide enough height and the sheep just jumped over them.  Your dead hedge looks much more robust.

posted 1 year ago
Thank you Tyler.

My hedge is about 6 feet most places and I jammed the parts in the middle in as tightly as possible, even walking on it to smash it down in places.  I'm not sure how it would do with sheep or goats but I'm confidant it will keep deer out.  It's much longer now than in the pictures I posted.  I'll post some updated ones soon.

posted 1 year ago
The last picture above shows the area I started with.  I'm clearing it by hand, so it's slow going, but rewarding.  A couple days ago I put in some apple trees.  They won't be proper guilds until spring when I can add many more plants, but this is how I start my plantings.

First picture is a tool I got from EasyDigging.com.  Standard disclaimer applies, I have no affiliation with the company, but I own several of their tools and I'm very happy with the quality of them.  This tool is the one I use most for clearing an area to put in a new bed, tree, whatever.

The second picture is the apple tree immediately after planting.

Picture three is after mulching.

And picture four is after ringing the tree with daffodils and extending the mulch circle to cover.

Nothing else will be done before spring when comfrey will be planted extensively around the tree, garlic chives, garlic, dill, bee balm, mints, clover, and other herbs and low-growers will be planted.  Autumn olive, honeyberry, jostaberry, and serviceberry bushes will be added as well.

I understand there is nothing ground-breaking here.  I'm hoping this will become a visual diary of the transformation from pasture to food forest.  I intend to document my failures as well as what works, and hopefully someone else will enjoy seeing this unfold.
easydigging.jpeg 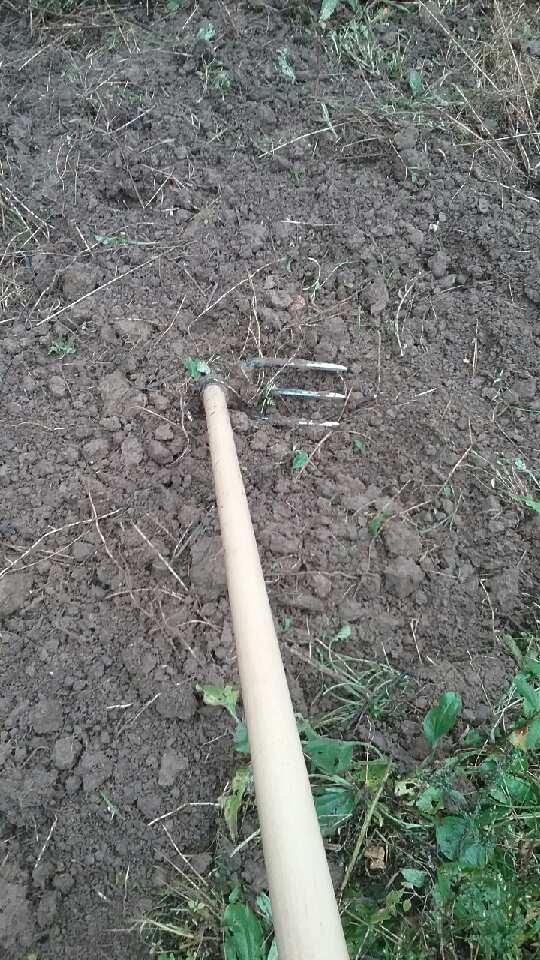 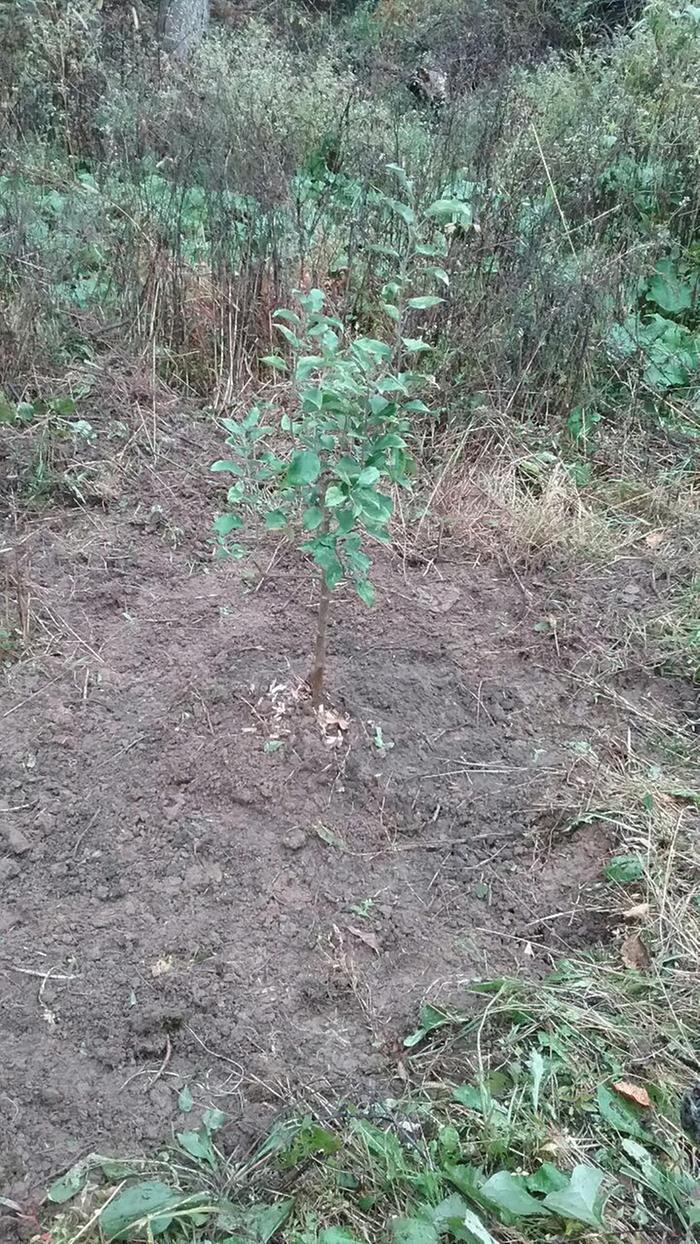 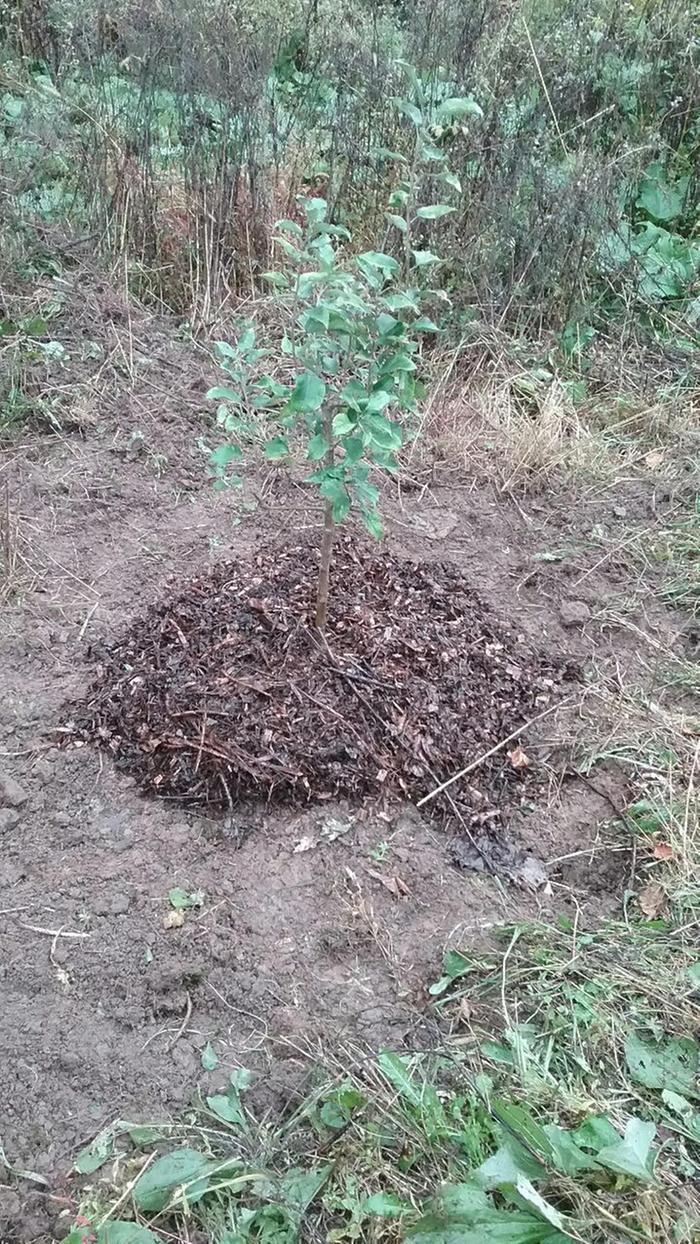 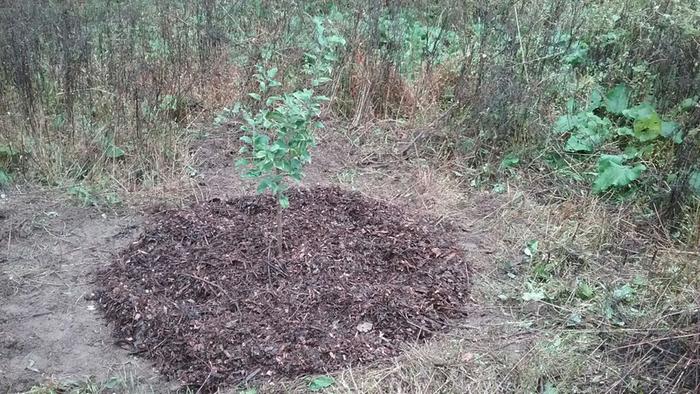 posted 1 year ago
Here is an update to the apple tree guild I started last year. I put in a few at the same time,  so I'm not sure if this picture shows the same one,  but the daffodils around all of them are doing well.  The other picture is one that i started expanding. I put 54 comfrey plants around it in a large ring.  Some straw and coffee grounds to start improving the soil.
20190426_190800.jpg 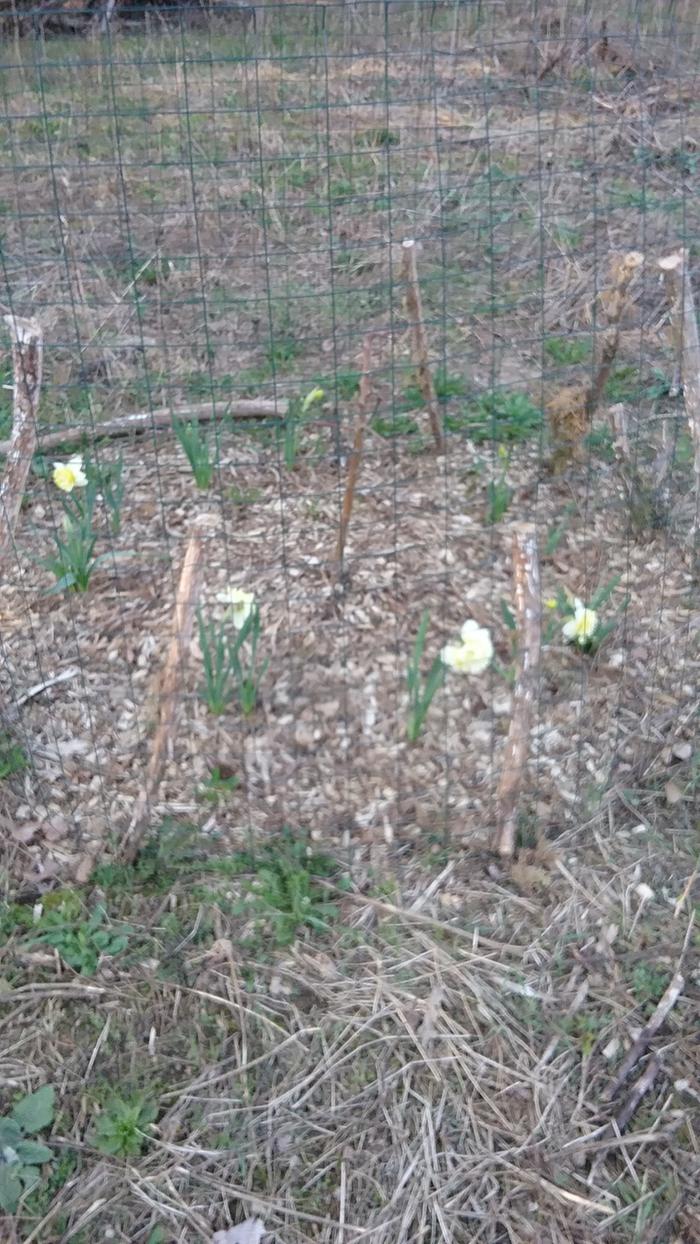 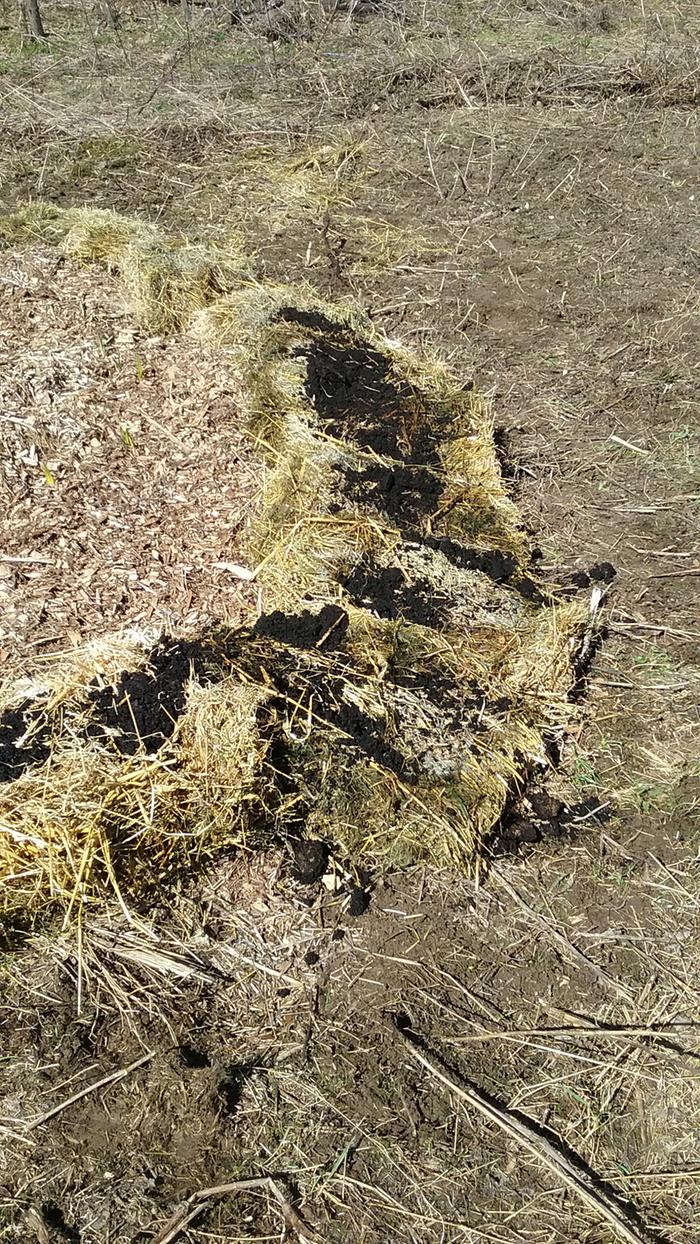 posted 1 year ago
All the comfrey plants came from about a quarter of one plant. I split the pieces into several large crowns and a lot of smaller root pieces.  If past experience is any indication,  all will grow.  On the shovel is an example of the smallest size I plant.  The other picture is a not-too-good picture of a large crown cutting.
20190419_115435.jpg 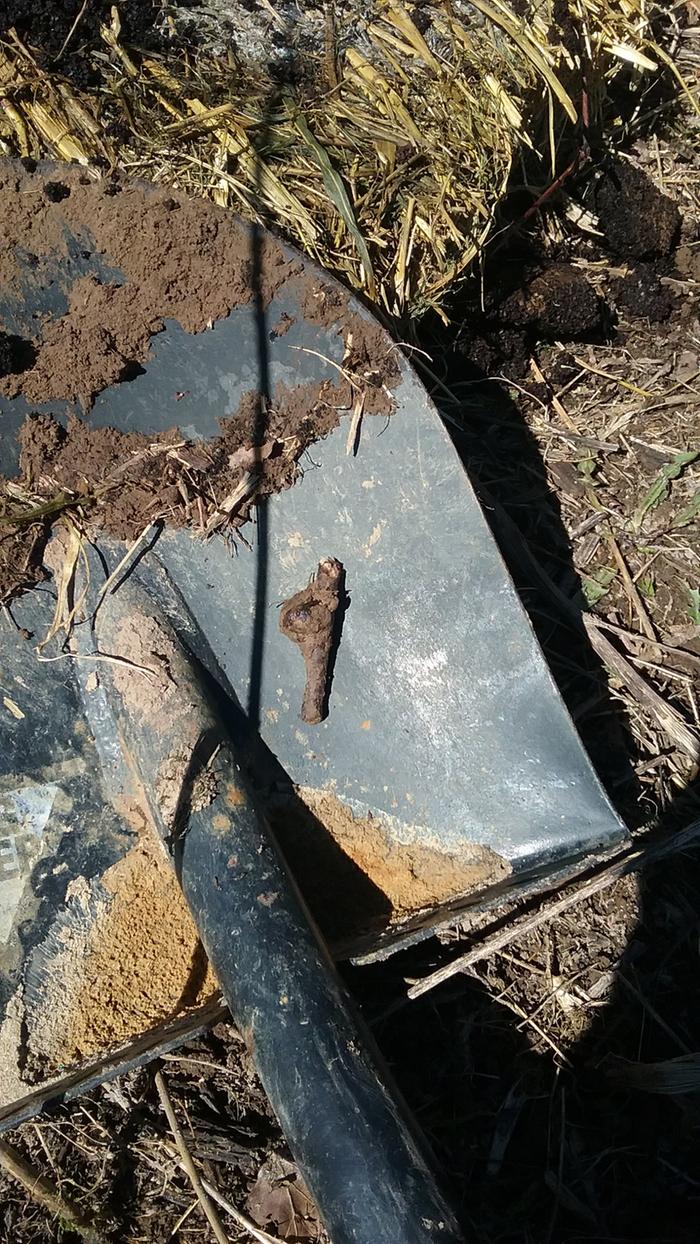 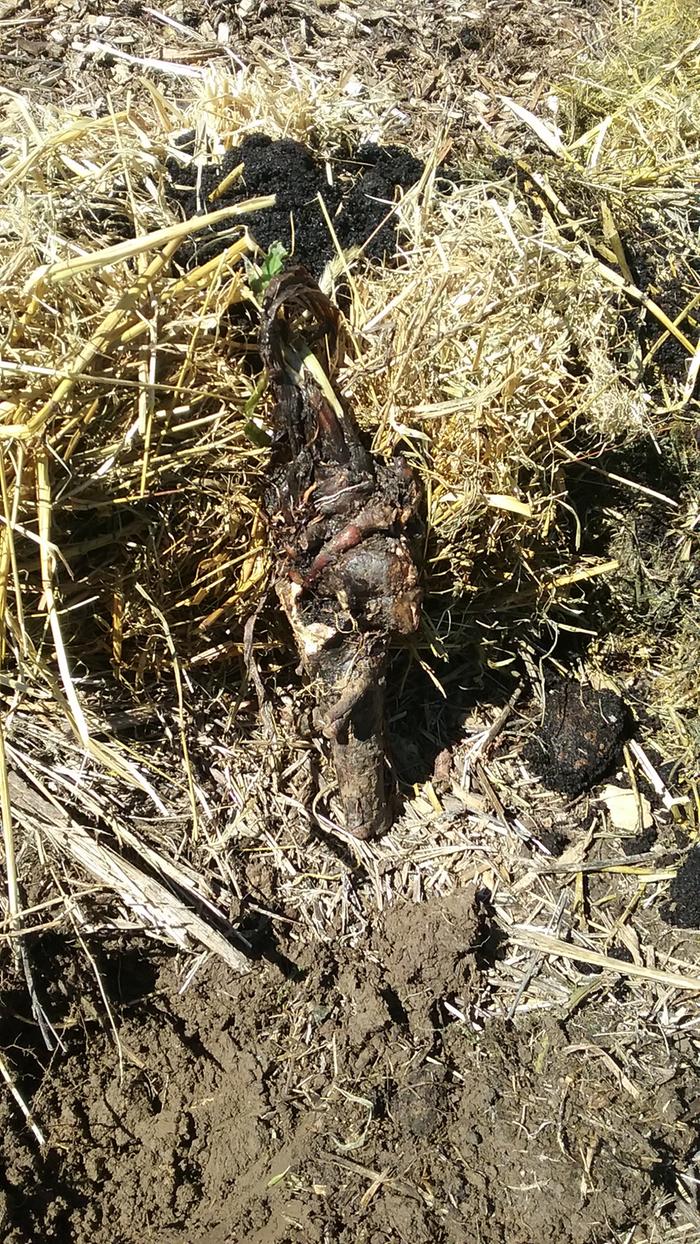 posted 1 year ago
After approximately 3 weeks,  the comfrey crowns are growing.

Today's project was putting in a raspberry bed.  It's about 2 or 3 feet wide, 16 feet long.  I took a picture that shows what the area looked like before I started,  after broad forking and planting,  after coffee grounds were put down,  and after applying wood chips.

posted 1 year ago
How many feet of barrier do you have now?  I'd love to see a picture.

Is this a property you drive to on free days?

posted 1 year ago
I like that dead hedge idea. I haven't seen that before. I can get taller trees to protect deer from getting to the leaves but they girdle the trunk, scraping their antlers. That may solve the trick and look more natural. Its like a smorgasbord of scraping wood for them.

posted 1 year ago
This property is 20 minutes or so from my current home.  I'm having a house built on it this summer. I go there nearly every day after work and spend a few hours a day there on days off.

The dead hedge is progressing,  although slowly.  I'll post another picture of it.  It takes a lot of material,  but I'm removing a lot of cedars that have CAR, so I'll be using the branches for posts and fill,  as well as branches from dead trees I am cleaning up.

I put in three more cherry trees and some locusts since I posted last on this thread, as well as some mint,  catnip,  bee balm and some other small things.   I didn't post any pictures recently because I didn't think anyone was looking at them 😊

I found my first morel this morning.

posted 1 year ago
A lot of people "like" threads cause they have no content to add. You have lots of likes, so lots of people are looking.

posted 1 year ago
Wow, and then some day you could cover that in soil and make a hugelkulture berm!

Julia Winter wrote:Wow, and then some day you could cover that in soil and make a hugelkulture berm!

That make take many years but as long as the living hedge grows up enough to make a fence, the dead hedge can take as long as it likes.

Lots of small animals have already taken up residence in it.

posted 1 year ago
Put in 6 nanking cherries today. I generally put cardboard around them and then mulch with wood chips.  Today I decided to try something more "Paul approved", and chopped and dropped a bunch of burdock around some of them instead.
20190602_192917.jpg
20190602_192436.jpg

posted 1 year ago
I'm really happy with the burdock mulch thus far.  We had some rain and the burdock leaves molded themselves to the shape of the ground,  much like newspaper does when you wet it.  I think it will work really well to keep the weeds down.  I'll probably add a lot more until it's 6 or 8 inches deep.

The Romeo cherry I put in in May is already blossoming.  It's only been in the ground a couple weeks.

posted 1 year ago
I tried very hard not to cut any milkweed plants when I was chopping and dropping thistle and burdock all over my new food forest area.  Just yesterday, I found dozens of these little guys.  Yay Monarchs!
MonarchCaterpillar.jpeg 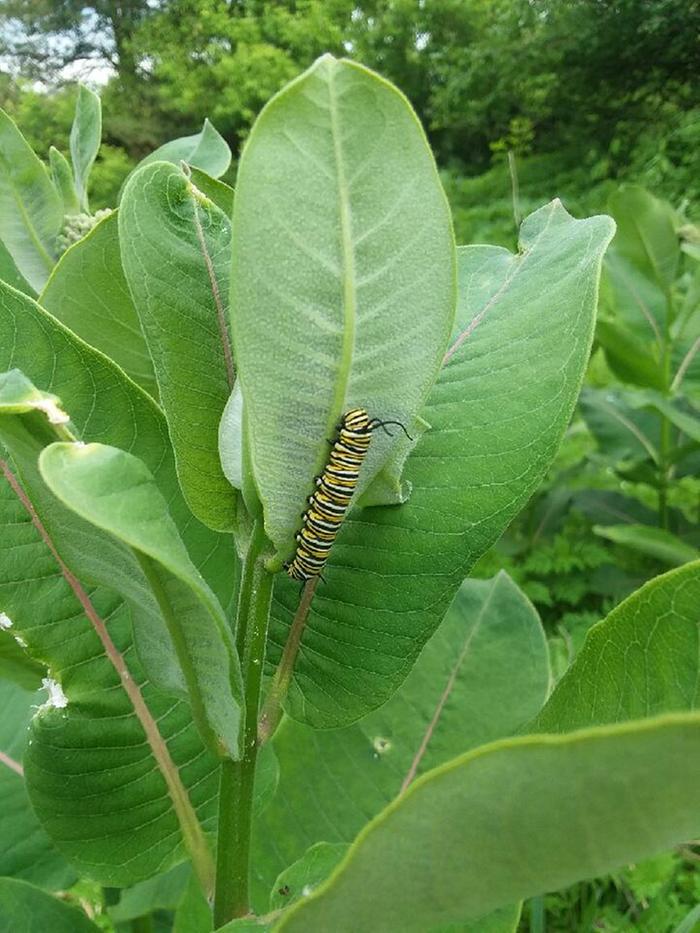 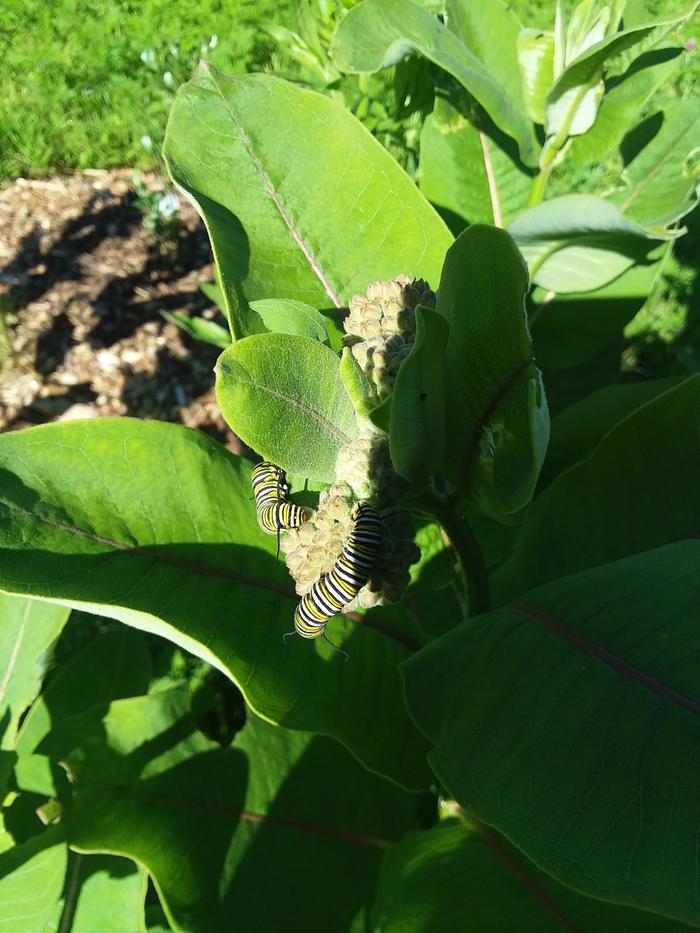 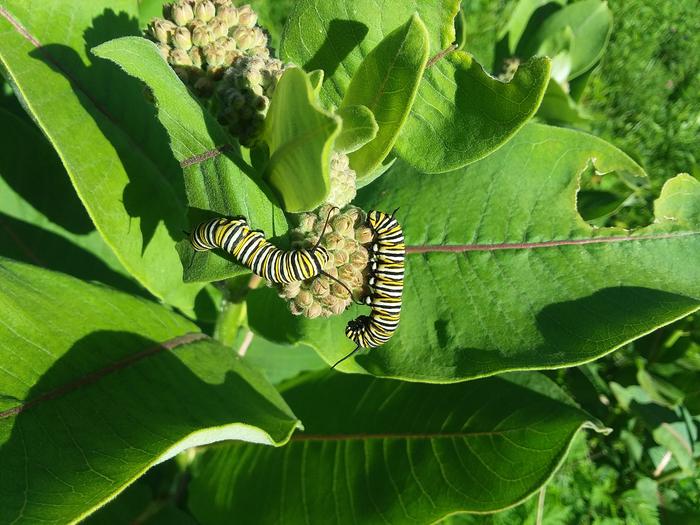