posted 1 year ago
About 15 miles west of Missoula,MT just off I-90, take the Nine Mile Exit, turn right go up about 1 mile it will be on the right side of the road. It should fall within the right of way for the HWY, did not see any private property signs or orange tress around it either. Be careful! Its a large bank and does collapse easily being all clay, the clay is all pink and red, nothing else in it but clay, zero rocks also.
1124181510.jpg 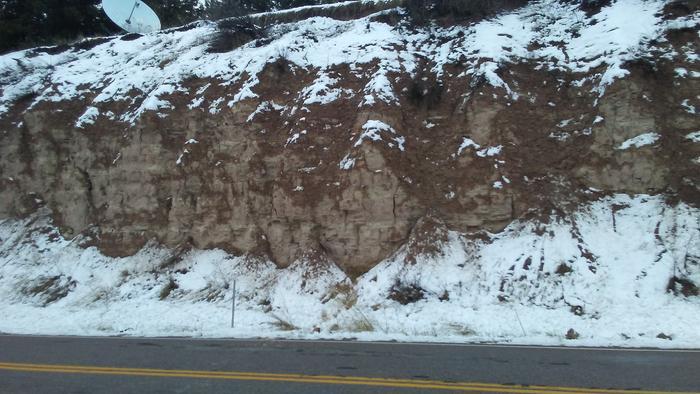 posted 1 year ago
Since I don't know the answer, wouldn't this still be an issue without the land owner's permission? While the county/state/whoever has an easement to maintain the road, removing something from the property I think would still require permission.

posted 1 year ago
If it was literally a handful to make a cup, maybe. But if it is enough to build a cob house or a pond or a RMH, that seem not nice.
I don't want myself and other tax payer to have to fix the landslide blocking the road and then re-enforced banks.

If that area behind is shared public forest land but not the 'public road itself'.

I do see a 'DirectTV' satellite dish, so it seems like likely to be free land/resources, I don't want to collapse their driveway or house or internet/tv. I would be sad if it happened to me. Actually I would be more than sad, esp if I saw you running to your vehicle.

The good news is that now that I have a general idea where clay is, if I had a friend who lives nearby I would talk to them.

posted 1 year ago
Montana highway right of way is generally 30 feet from edge of pavment both sides. You could just scoop up the clay that clearly already slid off the bank....there is plenty of it.  There is no house I can see on that hill only the sat dish, if there is one its far from that bank.
Cindy Skillman
pollinator
Posts: 178
Location: Zone 3-4 (usually 4) Western South Dakota, central Black Hills
68
I like...

posted 1 year ago
Everything belongs to someone or to some entity. No more wide open spaces where one may safely dig clays without permission from the land’s steward.

posted 1 year ago
I'm sure they are correct Roak.  But any one can check on land ownership in Montana .   I do not know if this is valid in other states but here you go to http://svc.mt.gov/msl/mtcadastral  You can find out ownership and contact info for the owners if you wish to contact them.  It's a pretty cool site.  Chances are that clay bank is in the roadway rite away. A bucket or two will probably not get you tossed in jail but, the land still is owned and taxes paid by the land owner. Look them up , give them a call and ask, its just a polite thing to do...

Truth is there is no lack of clay pockets here in W, Montana.  Just have to look around, check with the county road crew, any excavation going on should have some, and I promise they will want you to take some away...  they usually offer to load it with their machine...