Brad Horner
Posts: 36
2
posted 1 year ago
My goal is to make an attractive but rustic looking perimeter fence. Low budget. I can get pallets but not sure about chemical treated and size differences. My main curiosity is if it's feasible to make a mud wall out of it by filling in the middle of the pallets. We have good desert subsoil clay. Gets to -10 fahrenheit low so there is frost heave consideration. I could use tbars or 4x4 posts. A layer of something under the fence to prevent water wicking upward. Would the wood (sounds funny)... hold up?
Mike Haasl
master steward

posted 1 year ago
Would you need the adobe to touch the ground or could it be suspended a bit?  I don't know much about adobe but I'm guessing if it's touching the ground it would wick up into the pallets.

One bit of experience I have to add is in the post department.  I used cedar posts for one pallet fence and it's beefy.  It's also a zig zag layout which also helps a lot.  My other fence was t posts pounded down about 3'.  It's wobbly as hell.  It's also a straight fence which also doesn't help.

Regarding chemical treatments, pallets that have HT stamped on them are heat treated instead of chemically treated.  Also, I've heard that blue pallets are often covered with bad stuff.  Not made from bad stuff but used in a factory that contaminates them.  That could be hearsay but they're also ugly so I avoid them for multiple reasons.

Here's a picture of the zig zag fence.  We'd've put the pretty side towards us but we like our neighbors too much.  Since then we filled in the gaps with other boards and it looks prettier.
DSC04391s.jpg 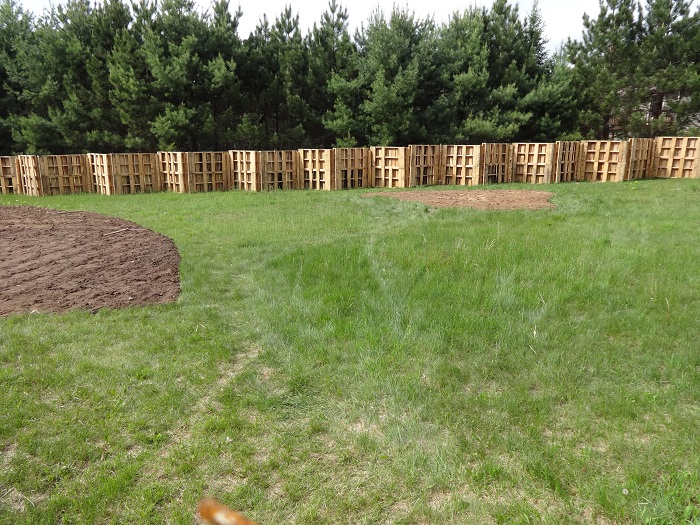 posted 1 year ago
Nice fence Mike!
I only have used pallets(vertically) as raised beds/compost bins,  but they seem to last a long time in that role.

Brad Horner
Posts: 36
2
posted 1 year ago
That zig zag probably looks better than straight to me. I don't recognize it as a pallet fence right away. We have high winds and so that's a plus I suppose, having that extra lateral support built into the zig zag. I might have to get three times as many pallets in able to get matching ones. Im going to test some adobe on my existing pallet trash bin.

As for wicking I'm considering a 6" gravel trench. I don't mind that it's extra work for a good look. Around remaining 7 .4 acres I could do latillo pole style Swedish fence. The pallet fence is to be block view of traffic.
John C Daley
Posts: 1034
Location: Bendigo , Australia
57
I like...

posted 1 year ago
I work with adobe.
I think what you are planning will fail.
Timber will rot, weather will damage the adobe.
water wicking up the wall will cause problems, and the solutions don't suit a fence.
Basically adobe needs protection of its foundations and lower parts from water.

Consider install steel fence posts located so the pallets drop over them.
If a pallet rots, it can be lifted and replaced, or collect plastic pallets