Zone 5/6 plant suggestions for a suntrap in zone 4

posted 3 years ago
We built a pallet fence along our north property line with a zig zag shape.  The design was partially for strength, partially to block the view of the neighbors and partially to create a series of sun traps.  The pallets are solid-ish wood on both sides and 6' tall.  They are backed by a double row of pines on the neighbor's side.  I'm going to add Eastern White Cedar to the north side of the fence on my side of the property line (in the zigs) to provide wind blocking if the neighbors ever cut down their pines.  So the wind protection is 6' high with pallets and 30' high with pines and eventually cedar.  The picture was taken prior to adding wood to the south side.

Given all of this, I'm trying to think of plants to put in those sun traps.  We get down to -25F air temp here but there is usually snow cover so the ground rarely freezes.  Having sun during the day in these traps is great but I'm not sure how much they'll help at 4AM.

So far I have Texas Quince and persimmon planted in a couple of the traps.  I'm thinking of trying gogi, jujube and Chicago hardy figs.

Are any of those obviously not going to work?  I'd rather not spend the money shipping in plants that are nearly guaranteed to die.

Any other suggestions of shrubs, small trees or herbaceous plants to attempt?  I do have peaches and apricots elsewhere in another microclimate.
DSC04390s.jpg 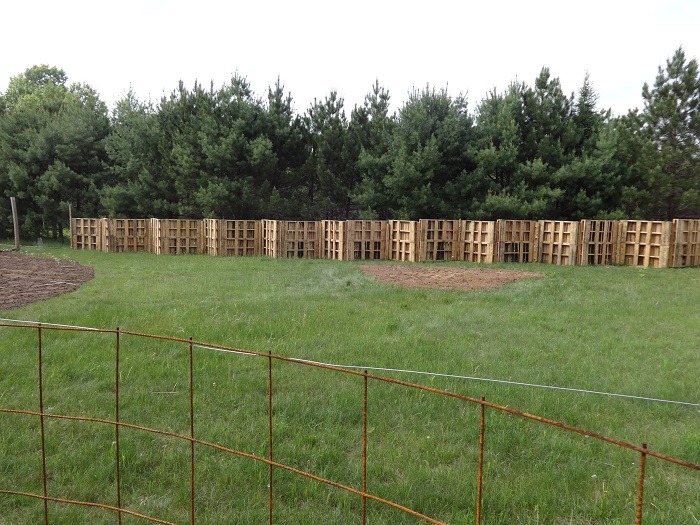 posted 3 years ago
It is possible that you could get a hint from how the peaches and apricots are doing -- because their problem is usually that they wake up early in the spring and then get clobbered by ongoing frost waves.

If the microclimates you create are consistent enough for your apricots and peaches to do well, then it could be worth a try with the more adventurous moves you're planning. (At first glance though it all sounds very adventurous indeed, -25 is a lot of negative F's.)

At our place we have a suntrap / windbreak in the form of a very dense hornbeam-hazel grove (you know how hornbeam usually keeps its leaves throughout the winter), with an extra row of willows on the northern side, which has been created to shelter our beehives. The bees are doing well, but... I've planted two grafted peach trees inside the protection zone (so deemed by the direction the northern winds usually take) and they both died inside of 3 years. And that's just Zone 6, some people might even laugh and call it 7.

Hazel, walnut, sour cherries, saskatoons (amelanchier) and seabuckthorn (hippophae) would be my first thought for zone 4, also some apple and plum cultivars. Berries in the ribes family (currants, gooseberries and various crosses) but only some cultivars of rubus (raspberry, blackberry).

And oh, haskap! Definitely that.

posted 3 years ago
Thanks Crt!  The peach/apricot microclimate is fully occupied.  The neat thing about that microclimate is that it's in the shade of some tall conifers until well into spring.  That leaves snow around them for an extra three weeks which I hope will delay their flowering.  Hopefully they'll make it, I just planted them in the last couple of years.

I figure I might as well attempt to push the zone a bit more with these sun traps.

Thanks L. Tims, I'll check into those!