Why don't ya hear about people growing their own f1 hybrid seed?

L. Tims
Posts: 105
6
posted 1 year ago
A while back I researched how f1 hybrids were made, I think in my mind it was some mystical voodoo dark art. Nope, it's just finding out which two varieties make a good cross and hand pollinating them so the seeds are 100% those two. But for some reason it just occurred to me that anyone could do this themselves.

Seems like it's the perfect solution, you figure out which two heirlooms you want to hybridize, buy an ounce of seeds for each, grow one plant of each every year and plant the hybrid seed from the previous year. Two plants will make hundreds of seeds so your ounce of seeds will last many years. You've got to do just a bit of hand pollinating but that's hardly any work at all. You could have a little plot that's just two of each species of plant you think it's worth doing for.

You get to harvest all your own seed like using heirlooms but you get hybrid vigor, so bigger harvests in less time. My only problem with hybrids before was that you had to buy new seed every year. This solves that. Occasionally you'll hear something wild like hybrids requiring 10x the water or making nutritionally devoid fruit but I don't think I believe those. Hybrids occur in nature, we're just controlling the process.

Is the information of which hybrids are hybrids of what not out there? I'm sure with the newer varieties they keep it secret, but the old hybrids? Some of the hybrids I've seen look like you can pretty much guess who the parents are anyways. Anyone know of any good f1 hybrid "recipes"?
Michael Cox
pollinator
Posts: 2668
Location: Kent, UK - Zone 8
320
I like...

posted 1 year ago
You can go even better than that and selectively breed for stable traits that you like, essentially creating your own "heirloom" variety.

L. Tims
Posts: 105
6
posted 1 year ago
I know about that, but taking two stable heirlooms and making an f1 hybrid is supposed to have a powerful effect on the vigor of the plant and make it grow faster and yield more than any heirloom could.
John Weiland
pollinator
Posts: 1552
Location: RRV of da Nort
245
posted 1 year ago

L. Tims wrote:I know about that, but taking two stable heirlooms and making an f1 hybrid is supposed to have a powerful effect on the vigor of the plant and make it grow faster and yield more than any heirloom could.

I guess I would say the answer is one that is personal to the grower and is additionally a quantitative one.    Whether or not two inbred parent lines will actually result in 'useful' (again, in the opinion of the grower) yield increases in the hybrid has to be tested and is measured in the parameters of 'general combining ability' and 'specific combining ability'.  That, in turn, tends to to rely on the degree to which the parents are genetically different from each other.  If the crop you are dealing with is already, through human intervention, rather low in genetic diversity, then the ability to produce a hybrid with increased vigor and yield will tend to be lower than one in which the lines to be crossed are higher in diversity.  But it all has to be tested in individual crosses to see which ones work.   It certainly can be done, but I think for many, the yield of open-pollinated heirloom varieties, continually selected in their garden for desirable traits, is sufficient for their needs and comes with reduced effort.
CombiningAbility.JPG 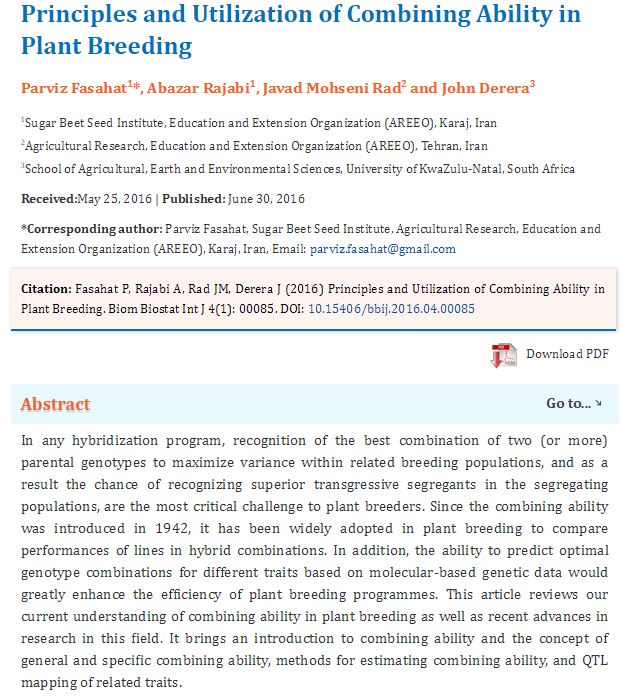 Posts: 5217
Location: Cache Valley, zone 4b, Irrigated, 9" rain in badlands.
1923
posted 1 year ago
I made an F1 hybrid sweet corn for my seed catalog this year. Both of the parents are readily available, and I published who the parents are, so anyone could recreate the hybrid. Hybridization in sweet corn is easy. Just remove the male flowers before they shed pollen. I'm intending to make a different F1 hybrid next year. The reasoning for this hybrid, is that I can offer a sugary enhanced corn embryo surrounded by the more reliable endosperm and pericarp of an old-fashioned su sweet corn.  It will germinate more reliably in cold spring soil.

Hybridization in brassicas is easy. Plant only one plant of the mother variety, and surround it with pollen donor plants.

Manual F1 hybrids are easy to make in melons and squash, because they have male and female flowers. And one successful pollination can make hundreds of seeds.

F1 spinach hybrids are easy, because there are male and female plants. Chop out the males from one variety, and the females from the other.

Hybridization in species with small perfect flowers is harder. I don't typically attempt it. Small flowers are difficult to work with. Seed set (for example on peas or beans) might only be 0 -3 seeds per attempted pollination. I might do these sorts of pollinations for a breeding project, where I only want 5 seeds, but I don't attempt to produce enough seed to grow a field of F1 hybrids.

My experience with manual pollination, is that it isn't trivial to find a receptive female, and a pollen donor that are both at a suitable life stage at the same time.

One of the joys of growing landrace style, is that the plants are producing F1 hybrids by natural means, and I don't have to put in the labor to make them myself. In the more out-crossing crops, the hybrids are occurring at high frequency. In the more inbreeding crops I pay more attention to identify the naturally occurring hybrids so that I can plant them preferentially the next growing season. In any case, plants with hybrid vigor will tend to produce more seeds than those with inbreeding depression, so by growing landrace style, I may be selecting for plants that are more naturally out-crossing.

On a purely philosophical level.,,, I think that the whole idea of hybrid-vigor is a misnomer, and a sleight of hand. I think what is really going on, is that the parents are experiencing inbreeding depression. Hybridizing them is just returning them to the state that they would have enjoyed if they hadn't been so highly inbred in the first place. Take heirloom tomatoes for example... They experienced three genetic bottlenecks during domestication.   Then they got captured by the "heirloom" seed movement, and underwent decade after decade of further inbreeding. It's no wonder that F1 hybrid tomatoes tend to produce on average about 50% more food than the heirlooms they are made from. I believe that a variety of genetically diverse promiscuously pollinating tomatoes would far out-perform commercial hybrids.

In the commercial seed world, the parents of an F1 hybrid are among the most closely guarded trade secrets.