Getting started with chickens, what motivates you?

posted 1 year ago
My wife and I had talked about getting chickens "some day" when we moved back to the farm. Then, just before Easter last year my sister told us the local farm store had their spring chicks in and asked if she could get some for our kids. We agreed even though we did not have a place to keep them once they were out of the brooder box in the basement. Nothing like a dozen chickens in the basement to prioritize and motivate one to build a coop. Thus, a coop was built. Sadly, due to predation, only two of the original 6 layers are currently with us. The other half dozen were meat birds that went in the freezer. After we lost the rooster and one of the Rhode Island Reds, the last two hens refused to go back in the coop. A bit too traumatic I guess, and they are roosting up in the rafters of a carport where I can't even reach them. I figured they were safe enough, and let them be.

We have wanted more chickens, but again it seemed like a "someday" thing. You know, the "When I get a chance to clean the coop out and get it ready" kind of someday. Well, yesterday was that someday. It had to be seeing as we went to the farm store for cat food and came home with 3 Cornish Cross, a Buff Brahma, 2 Barred Rock, 2 Midnight something's, and 2 Sapphire something or others. Oh, and a goose. I wanted to get a goose. 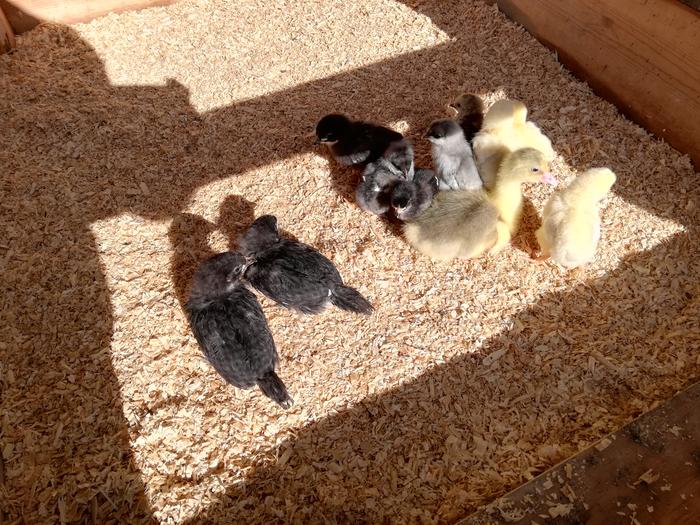 posted 1 year ago
Happy chickens and happy eggs is my motivation. While we eat meat, it's not unreasonable that they be happy in between. Too many horror stories about how they are kept in the factories. While i am not 100% there, i get closer with each cycle.

hunter miller
Posts: 60
Location: Central Pa
5
posted 1 year ago
Classic case of just one more, I grew up half on the family farm an when I was a teen bailing hay on the hot summer days while all my friends were off being teens I wanted nothing more then to get away from the farm an now entering my 30s I have come full circle. I always had chickens at one point we had 30 laying hens. We couldn't give eggs away fast enough. But when I moved into my own little place chickens were the first thing I got. The only time I have ever lost one was to a small falcon that dove into the coop and we have everything from yotes to bald eagles. When I was young and we had the 30 I opened the coop to find a skunk eating one and killed 4 my brother has lost some to opossums. I free range my chickens now other then them ripping up my flower beds I have no problems. Chickens though are the gateway drug, I ended up with turkeys an ducks I raise rabbits and now have dairy goats and if I had the room I would probably have a few pigs. I never really got the push for chickens they have just always been there but every year I end up getting more usually to refresh my layers ive even taken to hatching my own and from my experience if you get a good rooster even if he is noisy I would keep him as mine from last year was good but he was a red and when I hatched 9 chicks 5 of them where rooster I always figure 60/40, an I kept the pretty white one with black speckles and he just flipped a switch one day and attacked me everytime I turned my back to him so he went to market fast. Even though I have chickens and have hatched my own everytime I walk into the local feed store in the spring and see the chicks I am right back to putting the brooder together.
Christopher Nickelson-Mann
Posts: 25
Location: South Shore, Massachusetts, USA (Zone 6b)
3
I like...

posted 1 year ago
My biggest motivation is the fresh (tasty) eggs that are produced by hens that live and eat well. We occasionally cull chickens for meat, but since we only keep a small flock, it is infrequent.

Second, chickens do a great job helping provide high-quality compost for the garden. They turn the compost pile looking for scraps and bugs, saving me the effort of turning the pile myself. And their manure is another significant source of fertilizer for the garden! It's win-win.

Third, I like knowing that I've taken one more step away from a food system that is broken. I have control over how my hens are treated, housed, fed, cared for, etc. I don't want to support farms/companies producing eggs as cheaply as possible for as much profit as possible.

Fourth is the enjoyment! Chickens are fun to raise and watch. They have definitely changed the way I think about my food.

"When the world wearies and society ceases to satisfy, there is always the garden." - Minnie Aumonier

Leora Laforge
pollinator
Posts: 154
Location: Saskatchewan
38
posted 1 year ago
A couple weeks ago, I picked the 3rd tick of the year off myself. I killed it and immediately called in my order for chicks. This summer they will be cute. Then they will give me eggs. Come next spring they will hunt down bugs. So I will be able to enjoy my beautiful outdoors with my wonderful animals.