Dale Hodgins
Posts: 9002
Location: Victoria British Columbia-Canada
676
posted 9 years ago
This is a proposal which might require a brand-new section to be added to the forums. I suggested this a few weeks ago on the introducing Dale thread.

Thank you Ludi for allowing me to use your example here.

Ludi Tyler took me up on the idea of creating individual threads for our projects, thus proving that she is a woman of discerning taste and intellect.

She created "Ludi's permaculture projects." She has included a map of her place and photographs. She talks about what she has done previously, what she is doing now and about a variety of future plans.

Everyone reading that thread understands that this is her personal permaculture diary and photo album. Because of this, no one has been silly enough to warn her to avoid moving to Texas and people aren't dissecting her aquaponics project as though it is simply a mental construct. It's understood that these projects are well underway and there's no turning back. So instead of discouraging rebuttals ,she is likely to receive useful positive feedback geared to helping her succeed in her endeavors.

One problem I can see with everyone having their own thread is that it might clog up the permaculture section or the green building section or whatever other area people decide is their favorite. With constant updates and loading of photos these personal threads might tend to dominate the top of the page which would prevent people from naturally stumbling upon the hottest topics in each section. Most of us have building, growing and critter concerns going on all at the same time so I think a separate section makes sense. All of these threads would be in one section. It would be a shame if we all had to post in meaningless drivel.

I could see the personal projects section becoming extremely popular and I believe it would catch the interest of people visiting this site due to the real world projects and the photographic nature of this type of thread.

For anyone unfamiliar with permaculture some of the other sections might be overwhelming with all the technical detail being tossed around. The personal threads would look much more like blogs or online diaries which many are familiar with.

I post all of this as a computer novice having no idea of how it would actually be accomplished. So I leave it in your capable hands for consideration.

Posts: 2482
Location: FL
112
posted 9 years ago
If you wish to start a thread showcasing your projects, Meaningless Drivel would be a good place to get it started. If interest and participation is strong enough, it may be that a dedicated forum section would be considered.

To make it easier to find a particular users thread, a common thread topic would make it easy on the search engine. How about: "Personal Projects Showcase: Dale Hodgins"

posted 9 years ago
First, if there is something getting shot down, I would very much like to see that.

Second, I know that the green building forum already has individual green project there. I think that is excellent. Is there a problem?

Dale Hodgins
Posts: 9002
Location: Victoria British Columbia-Canada
676
posted 9 years ago
Hello Ken; that seems like a reasonable proposition. I remember seeing some furniture that you built from recycled materials. So you might want one of these personal threads for yourself.

I guess it would be all a matter of getting enough people on board to warrant the creation of a new section.

If you're reading this and you have photographs and information to share about your personal projects, chime in and say hello and then dump a couple of your photos on this thread. If enough of us do this this thread will become quite a jumble of different projects and thus illustrate the value of individual project threads.

Of course it would still make sense to create your own thread and put it in meaningless drivel as Ken has suggested. 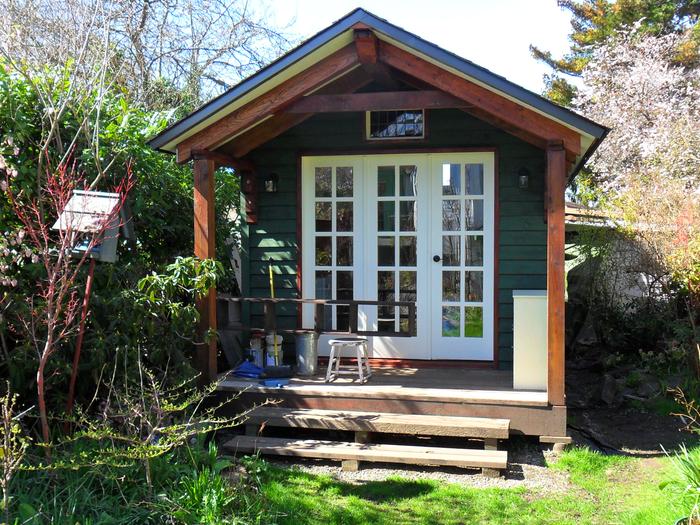 Casey Halone
Posts: 192
2
posted 9 years ago
hey Dale, I just email things from my iPhone to myself and get pictures that way. hope that helps.
Jordan Lowery
pollinator
Posts: 1528
Location: zone 7
18
posted 9 years ago
i have mentioned this before but got no response. i think that this idea can make this site even better. if paul says he likes proof, i think threads like your proposing will be full of it. I also think it would be best if these type of threads had their own section.

I could see the personal projects section becoming extremely popular and I believe it would catch the interest of people visiting this site due to the real world projects and the photographic nature of this type of thread.

This is what I like most about this concept; the real world projects and proof they exist.

Posts: 2482
Location: FL
112
posted 9 years ago
I started this thread a year and a half ago. It's sort of a log of the agonizingly slow process of whipping this place into shape.

Dale Hodgins
Posts: 9002
Location: Victoria British Columbia-Canada
676
posted 8 years ago
It's been six months since I started this thread. During that time, I built my own introducing Dale thread and it was deleted a short time later. (told a harmless joke).

Ludi often says "prove it" when others say what can or can't be done. With this thread, she does exactly that. Visitors to the thread have given helpful suggestions but because these are ongoing real projects rather than theoretical stuff, she hasn't had to deal with dire warnings explaining that everything should be done differently or not done at all.

Another benefit with this type of thread is that it works sort of like a diary where we can track our progress over time. It might even help those who tend to procrastinate since the audience will no doubt ask questions about the completion of this or that. I can see myself deciding to put the finishing touches on something I've built just so that I can maintain my good reputation as someone who isn't all talk.

Ludi, Do you find that having this audience of fellow growers, well wishers and voyeurs helps you to discipline yourself more or to squeeze a little more help from your husband?

posted 8 years ago
Dale, having a supportive audience here helps keep me from giving up when the going gets tough.

It definitely helps motivate me to keep trying if I believe my efforts might help someone else.

Jordan Lowery
pollinator
Posts: 1528
Location: zone 7
18
posted 8 years ago
i also am shocked we do not have a section for member projects yet.

Jeanine Gurley Jacildone
pollinator
Posts: 1459
Location: Midlands, South Carolina Zone 7b/8a
36
posted 8 years ago
Tyler, I think I may follow your example and start a thread like yours. I think it is very inspiring to see what others have done. Plus we all take the exact same information and apply it in very different ways - that's when I jump out of my chair and run outside saying 'oh I have to try that!'.

posted 8 years ago
I hope you will start your own project thread, Jeanine!

Tyler Ludens wrote:I hope you will start your own project thread, Jeanine!

Jeanine did start her own thread as have many others. There is now a special section for these threads. Ludi's thread has had almost 6000 views and many comments.

The only way I could see improving upon the current state of affairs would be to give the original poster editorial control. That would probably cause as many problems as it solves as those adding unwanted content would no doubt cry foul should their input be deleted. So, for anyone starting a thread, you might try to lay some ground rules concerning photo postings from unrelated projects or other unwanted content.

Overall, these threads are shaping up to be some of the more interesting since they deal with the real world documentation of one member's journey in planning and executing projects on their land.