posted 1 year ago
Silkworms are a fantastic source of nutrition.  These are supposedly one of the highest protein, lowest fat insects that humans can eat.  I love that raising this little bug has so many useful products (cloth, chicken food, human food, fertilizer, and all the benefits of growing mulberry trees).  Permaculture calls this Stacking Functions - I call it Fan-friggen-tastic!

I'm raising silkmoths for the first time this year.  I don't know if I'll have the courage to eat the pupa, but just in case I do, I want to gather up some recipes and hear about your own experiences consuming these tiny critters. 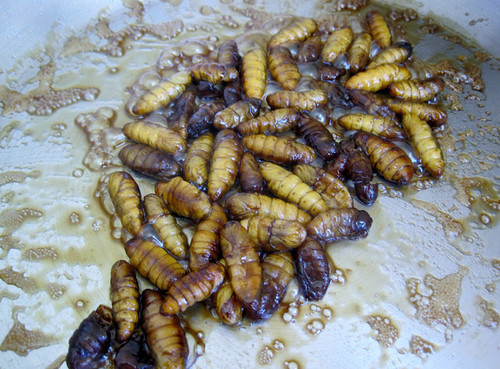 Line a baking sheet with parchment paper.
Place pupae in oven 10 minutes at 205 C.
Mix pupae and brown sugar together in a large saucepan and set on a stove-top over medium to medium-high heat.
As the brown sugar melts, use a wooden spoon to move the mixture around in the saucepan, making sure that all of the pupae get coated and none of the sugar stays in one place long enough to burn.
Cook for about 5 minutes at the most, until all of the sugar has melted and all of the nuts are coated (or immediately if you smell anything burning). Then, remove from heat and quickly spread the pupae out on the lined baking sheet to prevent them from drying in a clump.
Allow pupae to cool for about a minute before eating or adding to a recipe.

Burl Smith
Posts: 546
Location: Richwood, West Virginia
8
posted 1 year ago
if snails and slugs are related to shellfish I can consider them gastronomically appropriate, but caterpillars? Are they hairy?

Burl Smith wrote:if snails and slugs are related to shellfish I can consider them gastronomically appropriate, but caterpillars? Are they hairy?

I believe humans generally eat these guys in the pupa stage.  I've never tried it.  They look something like this: Looking at the soil pupa my chickens eat, they seem to have a firm shell, like a sausage casing, then goo inside.  I don't know what silkworms will be like or if they change texture when cooked.  It's going to be interesting.

The great thing about waiting until they are at this stage is that it's after the silk harvest.

Burl Smith
Posts: 546
Location: Richwood, West Virginia
8
posted 1 year ago
Gee, I dunno; I could probably ingest them as unidentified pieces in a bouillabaisse more readily than cracking open pupae with my teeth. However, perhaps you can earn a Pep badge with a video.

posted 1 year ago
you know when weird foodies can wax poetic for half an hour about a legendary meal?
I'm that weird foodie and silkworms were one of those meals for me.

I was in Seoul, many years ago (before Seoul was fancy and clean, back when it was full of dark alleys and crumbling infrastructure)... I was on a quick trip to get my Japanese visa renewed, it was maybe October and freezing. I was tromping through the city looking for papermaking supplies and starving and I smelled this amazing smell. I came upon this tiny old lady with a pushcart on the street, which had a wheel of fortune type thing. Spin the wheel, that's the price you pay.
I spoke no Korean but it was clear- I needed to eat what she was selling, whatever it was, and she was MOST amused that this very non-Korean was so excited to eat her food. She gave a "pshaw" and waved her hand at the wheel and pushed a cone of newspaper full of something brown and crusty and heavenly-smelling into my hand. It was salty and crunchy and was seriously one of the most delicious things I have ever tasted. I was in hog heaven, she was hysterical, people were staring. I had little idea of what they were, because it wasn't clear. I thought maybe some kind of "sea bug", like sand crabs, but they weren't fishy. I've eaten some weird things and I wouldn't have cared if I knew they were silkworm pupas, but most people were a bit surprised.
https://en.wikipedia.org/wiki/Beondegi

I since found them in korean stores here and there on occasion, sometimes canned and sometimes frozen, but they were never even close to the taste I experienced. I've since learned they are supposed to be boiled but I think the ones I had were boiled and then roasted til they got dry, since I distinctly recall crunch. It was seriously a delicacy.

posted 1 year ago
Some videos about cooking silk worms: