Diane Kistner
pollinator
Posts: 422
Location: Athens, GA Zone 8a
84
2
posted 1 year ago
Speaking of dog food, I ordered the super-essential dog Milkbone biscuits and Dreambones. Our dogs will eat beans and rice along with us as long as they get their damned biscuits! If we run out of biscuits, live will not be worth living anymore, because we will be harrassed to death, especially by our chiweenie Bingo, who would hunger-strike for Milkbones. Go figure.

I ordered plenty of chicken feed, which I keep inside until needed. We only have two chickens, but the eggs are getting ahead of me, so I'm freezing four of them to a ziplock, scrambled up a bit with a little salt, for pulling out as needed. I'm pulling the wealth of chickweed in the yard plus the invasive water celery to feed to the chickens.

I ordered a ton of teas, both bagged and loose, because it's going to be a while before I can get teas out of the garden. (Just started getting into tea this year so have been researching what's in our yard already that tea can be made of Yaupon holly for caffeine if needed!) Stash sells their teas in bulk for a reasonable price on Amazon, all individually wrapped, so I got a box of Lemon Ginger. Also stinging nettle, loose, which is good for tea but can also be put into soups.

I froze a few gallons of milk, several large bags of mozarella cheese, a 15 lb. bag of rice, and I have lots of canned and dried beans. I tried this recipe in my instant pot, and it was really easy.    Louise is working on recipes to help those of us who aren't great cooks but are having to deal with cooking from cheap pantry stocks.

Hoping to get fresh stuff from the garden for salads before too much longer.


OT: Aw Diane, thanks so much for this link!
My favourite version is probably still the one from Captain Fantastic (with Viggo Mortensen) but this is very cool as well. It's a bit embarrassing that I have not come across this band earlier. There is something new to learn every day...

Lol, you're going to regret it if you try that.  Comfrey is really picky.  Some people can't even touch it without gloves.  You may as well use a cactus.


Oh, lol, I thought I read about people using it.  After having done a search, it looks like maybe that's a bad idea.

I'll use it for chop and drop, and not so much chop and plop.  haha

reminds me of my first experience with Poison Ivy when I was *maybe* 4 years old and needing to go to the bathroom in the woods.  50+ years later I still remember being bed ridden, but thank the Great WIRT (Whatever Is Running Things) that I do not remember the pain...
Cécile Stelzer Johnson
pollinator
Posts: 672
Location: zone 4b, sandy, Continental D
203
posted 1 year ago
Here in Central Wisconsin, it is pretty much the same thing, unfortunately: Folks buying pizza, trying to stock up on toilet paper. I scored one pack yesterday a Fleet Farm. They said limit 2 to a customer, but I only have one A..hole, so why buy 2? [ha,ha]
About comfrey: It is a great plant to have around. Some folks are reporting skin irritation. Yes, they are a tad prickly, but not if you use gloves or if you allow it to wilt a bit. Even though they tell you your liver is going to die if you make tea from it, I dry some of my crop to use for tea.
Like everything in life, MODERATION is the key. It is also called "boneset" because of its ability to mend broken bones [in an external poultice application]. I use it mostly as chop and drop, and also as chicken feed because the plant is so prolific. Not sure it would help at all for Covid 19 though.

Cécile Stelzer Johnson wrote:
About comfrey: It is a great plant to have around.

Diane Kistner wrote:
Hoping to get fresh stuff from the garden for salads before too much longer.

Sprouting is helping us to supplement the small amount of greens that we can get delivered. Here is a video that I made about sprouting lentils. I have over 50 garden and kitchen videos on Instagram (@foodforestcardgame) but I put this one up on YouTube so people in this forum could find it through this post:

P.S. Please consider subscribing to my YouTube and following me on IG (@foodforestcardgame)
Michelle Arbol
Posts: 60
Location: The Great PNW
18
I like...

posted 1 year ago
Posting a pic of this amazing solar powered hand crank radio flashlight that i got years ago on Amazon.
Reason im recommending this specific radio to everyone it: My dad has had this exact model in his living room for years, at least 6+. He left it alone for about 2 years, just sitting in the window, catching the little sun that comes through (were in the PNW, not much sun at most times) and he hadnt charged the thing in YEARS (it DOES have a plug in charging capability). He just picks it up during a family get together and goes "huh, hanvent touched this thing is years, lets see if it works". Turns the thing on and we listen to the radio for quite a long time. So, of course, im pretty impressed that that little top panel worked to power the thing that well, and i ordered one the next day :)
Hand crank works well to charge, too. Ive tested that function out before. And the addition of the flashlight function gives you an added bonus ;)
Hope y'all enjoy! 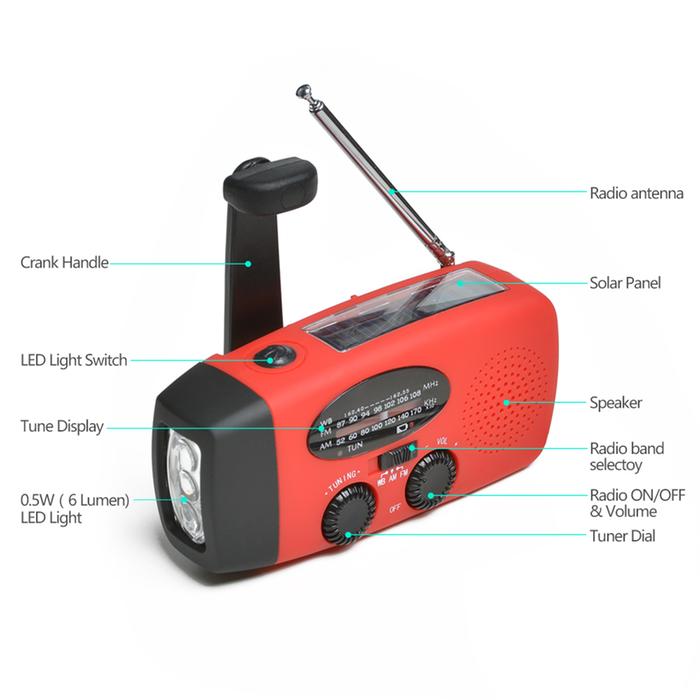 posted 9 months ago
We've got just about everything we need now to not need to leave our land until next summer, if need be. For years we've been reminded that something could happen any day to interrupt our supply lines and that we should prepare but it took this situation to get us motivated. We're totally off-grid, so the rest of the world could vanish and we'd be okay. Now that we're in this position I had expected to feel relief, calm and self-assurance but I just feel sad. I guess lots of people are lonely these days but there's something really unsettling about preparing to shut yourself off from the world until sanity returns.

Ken W Wilson wrote:Is anyone doing any special prepping for Corona virus?  I usually have a few weeks worth of canned food in case of an ice storm or other local disaster. I was pretty incapacitated by two surgeries last year, so I didn’t do much shopping. Cabinets were getting pretty empty. It seems like the virus could get pretty bad, and it might be good to not have to go out much during the worst of it. I’ve been stocking up on canned soup, tuna, salmon, beans, ravioli, chili, and some vegetables. I think I have enough for a couple weeks. I have some dehydrated food in case of a longer term situation,  but I want some supplies that don't need any preparation and are closer to my usual diet. I also bought a couple big packages of toilet paper and paper towels.

I bought most of it from Amazon Pantry.  You get discounts if you buy more than 10 or 15 items. I think its a little cheaper than a local store. It was great for shopping for such a wide range of items, and they deliver. Also, I really hate shopping.

I need to buy a battery powered radio. I plan to have some water stored. Does anyone have suggestions?

So how is everyone doing? Well, I hope. Hang in there. We are staying safe at home as much as possible...
Anne Miller
master steward

Mari said So how is everyone doing? Well, I hope. Hang in there. We are staying safe at home as much as possible.

Dear hubby and I are doing great.  I didn't prep for the virus especially.  We stocked up in Feb. by making one of our usual stock-up runs. I have only been in a grocery store three times since then thanks to food storage.

We buy powder eggs from Amazon though that is about all Amazon Pantry will sell to us.  Occasionally our daughter brings us some eggs from her chickens when she has extra.

We will be making a trip soon because the extension on vehicle registration will end.