Whilst the northern hemisphere is cooling-off and getting ready for winter, with all the issues that can create, on the east coast of Australia we currently have severe weather warnings and bushfires.

From south of Sydney to north of Brisbane and about 300km inland there's severe to catastrophic fire danger ratings. To put that into perspective, that rather narrow strip of land area is about equal to the entire State of Montana.

The two video links explain the fire rating system and the current weather conditions that make it THE WORST rating possible - several lives and numerous properties have been lost in the last few days.


The Commissioner of the NSW Rural Fire Service specifically noted: the fire intensities will be such that they are likely to create their own weather patterns - storm clouds and lightening, resulting in the possibility of further fires through lightening strikes. The wind generated will also carry embers at least 20km ahead of the fire front and a further cause of spot fires.


We're in for some interesting days ahead.

I have no doubt about the severity of fire risks that particular part of Australia must face.  As an American Midwesterner, I am accustomed to high heat and extreme humidity.  I was at an airport once in Minneapolis (which, though in the north of the country still gets plenty hot and humid in summer—think what over 18 hours of sunlight will do!).  In crossing a parking lot, a group of fellow travelers finally reached an air conditioned elevator after a hike.  One woman from Nevada commented that she thought it was humid when she got up in Nevada.  I asked how humid.  She said 30%.  The rest of us laughed.  I can’t remember the last time I saw humidity that low.

But this works both way.  I live near a national forest and a few years ago we had a forest fire during a dry fall.  But this was nothing compared to high heat and extremely low humidity you must have.  If your area of Australia bears any resemblance to Southern California then you have my sympathies regarding fire risk.

On a different note, yes, you are absolutely correct about fire making it’s own weather.  I remember reading about fire bombing during WWII.  Hamburg and Dresden Germany were both destroyed in “firestorms”, a huge roaring fire that developed hurricane force winds, actually picked up asphalt and sucked in debris to be consumed in the blaze.  The fires burned for 2-3 days before they ran out of fuel.

In Japan, the bombing was even worse.  I read of an account of a B-29 (a really, really big plane) being flipped over mid-air because one wing caught an intense updraft.

F. Agricola, of all the natural disasters, fire seems the worst for me.  You really do have my sympathies.

I have witnessed lightening over a firestorm, but it was some distance away. That was an 'interesting' day because we were in the bush at the time with it blowing in our direction and the only way out was either a three hour track walk paralleling the fire or to stay on the river. An air force helio dropped in during the night and evacuated some Boy Scouts, but left us because they had other operations to perform and we were experience bushwalkers - thanks fella's!

As a kid, when they burnt off the sugar cane fields in the cool of the evening, I've clearly seen lightening. (There's a famous Aussie song which captures that as a typical cultural experience - been there, done that, got the T-Shirt!)

What makes fire fighting difficult here is the almost continuous band of native forest (National Parks and Reserves) that extends from the outskirts of Melbourne, past Sydney and Brisbane and continues up to Cape York (Coral Sea) - the whole east coast. Besides providing habitat, it's the main watershed for most of our potable water.

About 35C with 8% humidity and strong winds at the moment, probably +40C in the sun - perfect fire conditions. The weather has been erratic - a few days last week it was 8C at night and 21C during the day with 75% humidity, then it seesawed all over the place. The gusting winds are late, usually hitting us in August and blowing all the flowers off the Macadamia Nut trees, but they've come at a high fire risk time, making things worse.

They're moving rural and city fire services around on a need basis, called in air force assistance for water bombing (a rare instance), and a group of NZ fire fighters are on their way to assist.


[Yes, a few of my Dad's mates were RAAF aircrews on Lancaster and Mosquito Pathfinder Force bombers over Germany in WW2 - their stories of dropping incendiary bombs were frightening.]

posted 1 year ago
Since I cut a lot of wood, I see a lot of evidence of lightning strikes against trees, but since it is so wet and humid here, they seldom cause forest fires. I have seen in it once though.

The craziest weather I have ever witnessed was a Thunder and Lightning Storm DURING A blizzard. No joke. It is rare, but happens according to Wikipedia. When it occurred a few years ago, we looked it up to see if what we heard and saw really could happen, and it said "intense snowfall will follow". Because the storm front was a few miles out, about the time we read it online, it hit. I think we got 5 additional inches of snow within the hour. It was an intense blizzard I assure you.

Travis Johnson wrote:The craziest weather I have ever witnessed was a Thunder and Lightning Storm DURING A blizzard.


We call those "thunder flurries" around here.  Not really flurries but it sounds neat to say.  I've probably seen it about once a decade.

I have probably seen “thunder snow” about 5 times in my life.  About 2 years ago we were traveling north in Iowa.  The weather changed from being perfectly clear and totally dry roads to having densely packed and thick snow on the highway and visibility that dropped from unlimited to near whiteout in less than 5 miles.

The snow was incredibly heavy and terribly wet.  We drove through 50 miles of the stuff till we got to our destination.  Lighting and and thunder crashed all around us.  It was odd.  It was loud but strangely muffled, almost like one could hear the initial crash of thunder but no echo in the distance.

In the end we got there safely but it made for a decent story.

posted 11 months ago
Hope you guys in the cooling north are looking forward to a 'White Christmas'.

We're experiencing record temperatures: a new record for the highest average temperature was set on Wednesday at 41.9 C (108 F)

No useful rain since about June - a few millimetres that did nothing but settle the dust.

I took the photo in late November in northern NSW at a community where bushfires killed three people and destroyed over 100 homes and a school - they still maintain a sense of humour. How the sign and plastic delineation post survived is weird, all others were melted.

There's over 100 bushfires burning in NSW alone, volunteers from New Zealand, Canada, and the USA are assisting. My brother was on a commercial jet flying from Sydney to Brisbane a few weeks ago and it took a full five minutes to pass a single fire front!

Thick smoke is blanketing many cities and regional towns - it can literally be seen from the ISS.

AND, we're on Stage 2 Water Restrictions:

- gardens can only be watered before 10am or after 4pm with a watering can or bucket
- smart and drip irrigation systems may only be used for 15 minutes before 10am or after 4pm
- the use of unattended hoses is no longer permitted
- hosing of hard surfaces is not permitted, unless in an emergency
- cars can only be washed with a bucket or at a commercial car wash
- a permit is required before filling a pool of any size.


We definitely need some leadership for national infrastructure: fewer highways and tunnels in metro areas, more funded ones like water pipelines from our northern States that get the monsoon, some kind of payment for emergency services volunteers, growing cotton and rice in climate suitable locations only, etc.

The link shows some dramatic footage from one of the Rural Fires Service (RFS) teams driving through a full forest fire to help protect a property - the black & white dashcam footage is sobering stuff. (The water is from the vehicles fire suppression system so it doesn't burn) The RFS, who do the majority of bushfire-fighting, are volunteers - mechanics, cafe owners, school teachers, etc who volunteer their time to protect the community. 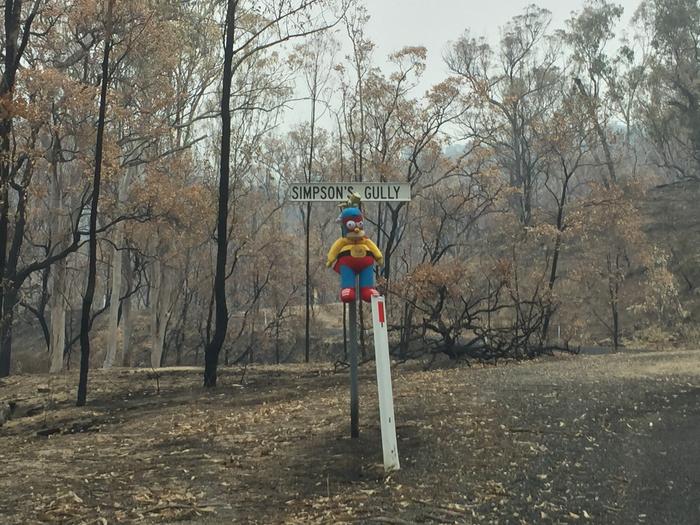 M. Phelps
Posts: 194
21
posted 11 months ago
not this past summer but the one before...
i was up working on my cabin and woke up one morning to what i thought was fog
as soon as i opened the door to my vehicle (where i was sleeping)
i could smell it was smoke
it was coming from the direction i would have to travel in order to get to the highway
all day was like a sunset
that strengthened my resolve to build an underground home
i have also witnessed a tornado very close to me which caused much destruction
another reason to build something underground

the realtor whom i bought the property through, told me a story of her grandmother
there was a historical fire in 1922 up there
her grandmother and family were on the shore of a nearby "lake"
(which is actually a wide section of river) when the fire arrived
they had to swim to the middle of the lake and while out there the fire actually crossed to the other side and continued along
Daniel Bowman
Posts: 86
Location: Sandy Mush, NC
2
posted 11 months ago
Does anyone know if Zaytuna or other permaculture farms in the area have been affected? It is shocking how much has burned so far, in the millions of hectares.
F Agricola
Posts: 664
Location: Australia, New South Wales. Köppen: Cfa (Humid Subtropical), USDA: 10/11
2
I like...

Daniel Bowman wrote:Does anyone know if Zaytuna or other permaculture farms in the area have been affected? It is shocking how much has burned so far, in the millions of hectares.

According to the Rural Fire Service Facebook page, the area is on high alert but currently okay.

If you've been watching international news, we're going through a VERY rough summer.

Intense bushfires throughout the nation, people killed and hundreds of houses destroyed, not to mention native habitat and animals.

Today's reports said 40,000 sq kilometres have been destroyed by firestorms so far.

A fire tornado picked up a 10 tonne Rural Fire Service truck and flipped it over, killing one volunteer and injuring others inside.

We have a significant drought, water restrictions and high temperatures.

I placed a fairly good quality thermometer in the shade under an open awning and it's registering 48 C = 118F.

Please package and send us some of that snow and ice ASAP! Though we'd prefer 500mm of rain.