posted 1 year ago
How do we define "handwoven"?
The word "handwoven" means many things to many people.   But does it have a single place we can say "yes, this is handwoven" and "no, that is not"?

There is a great conversation in the weaving community these days about whether a computer-assisted loom qualifies as handwoven.  What they forget, is we already had this conversation 100 years ago when some of the first mechanical handwoven fabrics were being created.

Weaving is the process of interlocking parallel threads with perpendicular threads.  Think about jeans vs a t-shirt.  A t-shirt is a knit fabric, which is a lot like those scratchy socks your grandmother used to make you as a kid.  Whereas Jeans are woven fabric ( usually 1/3 twill).  I've heard people say weaving came to human hands about the same time as we discovered how to harness fire - perhaps before.  But I wasn't there, so I don't know if it's true.  But I can believe it 'cause it makes me happy.

What is Hand Weaving?

Weaving by hand in it's purest sense is when the hand manipulates the warp and weft (the long threads and the back and forth threads) of the loom.  For example, the weaving traditions of the Coast Salish people still practice today.

You can see how her hands are picking each thread individually, but the loom still holds the warp threads parallel.  This is pure hand weaving and puts a tremendous amount of the artists' spirit and time into each piece.  It also shows how you can create beautiful works with some of the simplest tools.

But there are other ways to weave.  We move up from each thread being hand manipulated to something like a backstrap loom where the weaver takes each thread and attaches it to a stick, and uses other sticks to manipulate how the warp and weft interact.

The video is an advert for her class - but it shows some amazing close-ups on how the loom works and the weaver is well known and an excellent teacher.

One of the big things about backstrap weaving is the human weaver becomes part of the loom.  The body of the weaver controls the tension on the warp.

There are lots of other methods of making cloth but I want to address the floor loom because this is where most hobby weavers stop when they talk about handwoven and hand weaving cloth.

What is a Floor Loom?

A floor loom is a large frame that holds and organizes the warp, provides a means for lifting or sinking the warp in a given order, a method for beating the weft into the fell (fabric), and a place to stash the cloth.

Most floor looms have at least four shafts - which starts getting complicated and lost in the terminology.  So here's a photo of a floor loom 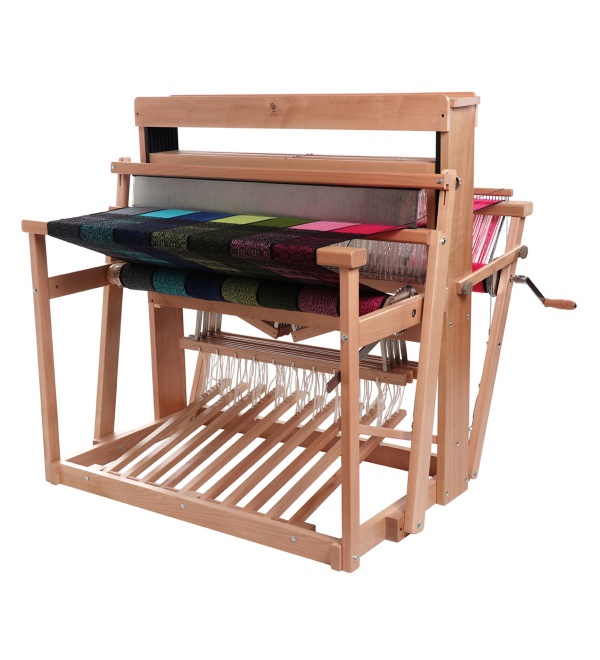 For this loom, the weaver measures the warp, winds the warp onto the loom, thread by hand each of the many hundred warp threads through the heddles (ways of lifting the warp), and thread by hand the reed (thing for beating), then attach the string to the cloth beam.  And then they can start weaving by pressing peddles down, they manipulate the warp and with a boat shuttle, they pass the weft between the warp threads.  And then, they take the beater and press it against the cloth to secure the warp.  Repeat.  About 80,000 times and we get some cloth.  It's a very manual process.

Floor looms are worlds faster than pure hand weaving and great for production work.  But it is still reliant on the human component to make every choice.  And yet, once the setup is complete, it relies on the machine to do almost all of the work.

What is Computer-Assisted and Dobby Looms?

One of the beauties of hand weaving is the infinite ability to make intricate patterns.  When we were pure hand weaving, with each individual thread being manipulated by hand, we could create incredibly complicated patterns - if we are patient enough.  Like this: 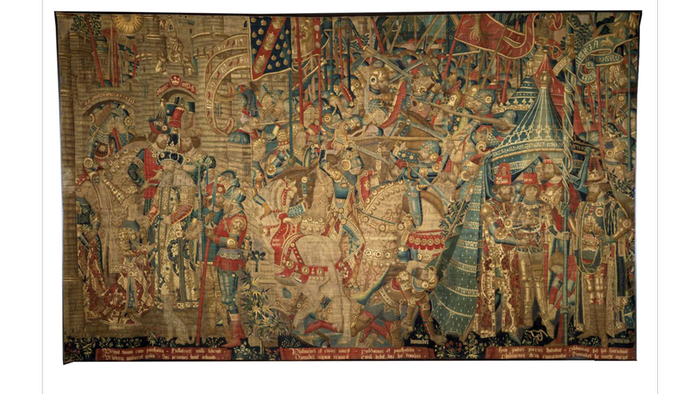 But if we could make a floor loom weave complicated patterns like this? 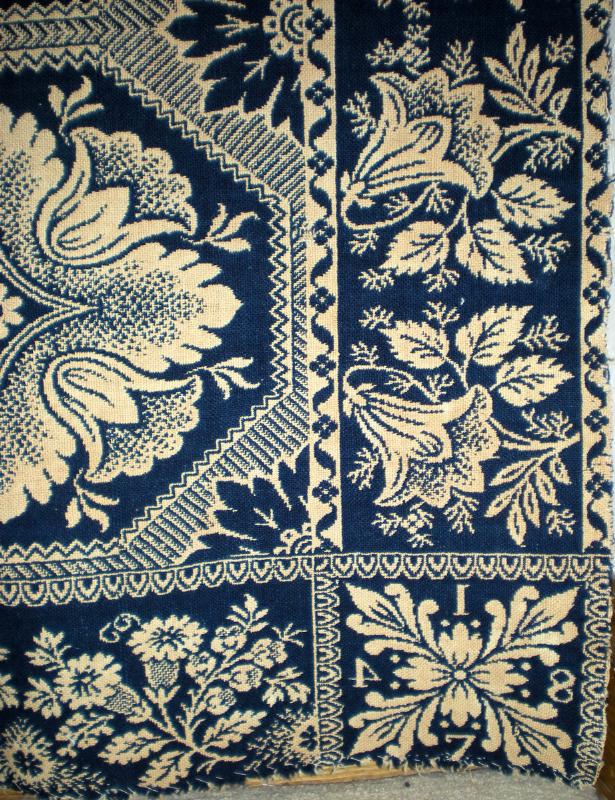 For this, we need more shafts (ability to manipulate the warp) and we suddenly run into a problem.  The human body is only so big and only has two legs.  The ability to lift the right number of shafts becomes more than the human can manage.  For a while, they got through this by having a second human on top of the loom picking up the shafts.  But then, someone invented the punch card system that could tell the loom which shafts to lift when.  This is the origin of the computer, and this is the origins of the mechanical loom.

With the punchcard loom, the human still had to sit at the loom and tell it when to go and what to do.

Today we have many different variations on this theme.  For some, keeping track of complicated patterns in their head is difficult (I know I don't like counting to more than four when weaving), so they use smartphones to tell them when to do what.  Other people have looms with computers in them, called dobby looms.  The weaver sets everything up, programmes the loom with the desired pattern and sits at the loom using two paddles to tell the loom when to do what.

As humans arms are only so long, we are limited to how wide a fabric we can make.  So someone invented the flying shuttle which makes catching and throwing the little boat thingy with the threads much easier.  We just have to tug on a string and send the weft back and forth.


OKAY OKAY, I get it.  There are a lot of different looms.  Can we get back to what qualifies as "handwoven" already?


That is kind of the point?  What qualifies as handwoven?

With modern-day technology, we are seeing the rise of the smartphone-assisted weaving and other very complicated technology helping make hand weaving easier, faster, and more complicated.  People like me who rely on the (not so) simple floor loom for production weaving are being out paced by complex new technology that makes fewer mistakes than I do.

Yep, Luddites were weavers who were threatened by new technology and first to feel the might of the industrial revolution - unemployment.  (but as a side note, if the industrial weaving practices were really that awesome, it's interesting that there is enough demand that handweavers can still make a living today).  They too feared the new technology that made weaving faster, easier, and more complicated.  But the real change came when we had water-powered machines that didn't need one weaver per loom.  Then steam-driven machines.  Then electric.

But in between the floor loom and the electric behemoth we have today is a funny spot.  A loom that does most of the work, but still requires a human sit at the machine and applies human power to make it work.  The human still has to set up the loom, which takes HOURS longer than a floor loom, and it won't weave without the human.  Is this handweaving?  Well, let's ask the experts.

Here's the kind of loom they use for harris tweed

Even though it is mechanical, it is still set up by the weaver and powered by the weaver.  The weaver has to monitor each toss of the shuttle to ensure high-quality cloth.


Handwoven is a sliding scale

The definition of handwoven is a sliding scale with complicated, multi-tonne machines at one end and simple hand-manipulated yarn at the other.  At its heart, it needs a human actively powering and participating in every aspect of weaving.  The weaver makes the choices and provides the source of energy to make the cloth.  That's what handweaving is and the more complicated the machine, the more understanding the weaver needs to make a sound cloth.

Another term to toss about is Handloomed

This would be a loom where the set up is done manually - human measuring and threading the loom - but the actual weaving is not human-run but human-supervised like this mill here:

posted 1 year ago
this is good

Handcrafted would make me happy for only human power machine - but maybe electric lite is okay.
Kim Goodwin
gardener

posted 1 year ago
This thread is fantastic!  I just bookmarked it so I can go back and watch all of the videos.

I agree about the definition of handwoven as including using human powered tools.  That makes sense to me.  Like the comparison above of a treadle sewing machine.  Seems fair.  I guess if someone invents a bicycle powered loom - like if the human interaction with the weaving was somehow so removed that all you needed to do was pedal  a bike - then I'd reassess the definition.

It's so nice having handwoven/sewn/knitted/knotted/felted things in one's life.  I feel immensely grateful to my grandmother for introducing me to crocheting at an early age.  Though I was the only one who took to it, I'm really glad she bothered to try and teach us.  It kindled my love of fiber arts.  She sewed, as well, but only knew how to use a treadle machine.

I love seeing what different cultures used traditionally for their fibercraft, and also what they incorporated as new materials were brought in.  Something that astonished me was that cotton was independently domesticated in both the Old and New World!  Wow.  I'm living in the SW now, and looking forward to growing some cotton and trying it out.

Here in the SW there are quite a few birds that make woven nests, too.  If I only had my mouth to weave with... I don't think I would have kept it up!  So I guess their creations are "beakwoven"?