Building a raised bed with hugelkultur, can I check that my plan is okay?

j brun
Posts: 9
Location: quebec zone- 4a loamy sand soil
3
posted 9 months ago
Hey,
I think you have some good ingredients, but I would likely layer them a bit differently. I would leave the wood on bottom, then add enough garden soil/sand to fill all the holes and gaps, then the less rotted compost on top of that, then a blend of the bagged compost and more native soil on top. If/when it gets too hot/dry outside, I would add the pine needles as mulch to retain moisture. In the end, it should all break down either way and make some nice soil.
Samuel Mcloughlin
Posts: 34
Location: Midlands, england
9
I like...

posted 9 months ago
Okay what's your reasoning just so I can learn something? I find myself wanting to agree with you

j brun
Posts: 9
Location: quebec zone- 4a loamy sand soil
3
posted 9 months ago
I think using soil around the logs will prevent the level of the bed from lowering as quickly due to settling and decomposition. It will also make it less easy for rodents to tunnel. We had mice in our first small hugelmound. Eventually, I filled the holes and anywhere else I could stick my fingers in with more soil. I've also since extended that mound, and have built a few others. The ones I've packed tightly, I haven't noticed any mice since. The ones where I just lightly covered the logs with soil and sod, I've seen lots of squirrels and mice tracks.

Using soil instead of pine needles will also give roots a more consistent soil pathway to the native soil below, incase you grow any deep rooted plants. Pine needles can tie up nitrogen when buried until they break down. As a mulch they work well. We've used mostly pine needles, and chop-and-drop plants as mulch. We usually have a short season, so I'm planning on raking the mulch into the paths this year, to warm the beds faster, until our usual summer heat and lack of rain comes. The mulch should help keep the soil cool and retain some of the moisture. We have municipal water and try not to use it for the garden unless it's really dry.

posted 9 months ago
Brilliant thank you for your feedback. I'm happy to proceed now. Another thought. I want to abandon the idea of crop rotated annual beds. I'm planning to plant a bay leaf Bush in the middle of the bed and then guild around it, hopefully with perennials - I was thinking perpetual spinach beet and dandelion. And then around the guided heart of the bed grow my annuals in the remaining space. Peas at one end, beans at the other. Courgette and squash in the middle spaces and a couple of tomato bushes. Any guilding tips?

posted 9 months ago
Hi Samuel. I second J Brun's suggestion to layer the pine needles with the soil & compost. I would also suggest concentrating on growing nitrogen producers in it the first year or two. Beans, peas, & clovers, etc. Don't be afraid to dilute some urine to about 10% strength & use that as fertilizer. New hugels want lots of nitrogen & water. Good luck. It looks good!

posted 9 months ago
Thanks Mike

That is some great looking compost and there is some great advice here.  I do have a question:  is the bed sitting on the ground or on some type of impermeable surface?

posted 9 months ago
Hey dude. Its on the ground. There was weed suppression fabric under the whole area but I've cut the bottom out of the bed with a craft knife to allow access to the ground

In that case I would say you are doing thing pretty well.  I used to like the idea of container gardening, but I now believe that whenever possible, the garden bedding should mix and mingle with the earth beneath.

Typically at this point I would suggest wine cap mushrooms because of their ability to turn wood into amazing garden bedding, but from the looks of your compost, I imagine that your bedding is already amazing and will only get better with the decomposing wood.

I think you are off to a great start and look forward to seeing how your garden works out.

posted 9 months ago
Welcome Samuel, and good question/idea. I third the suggestions above to go (from bottom up) wood-sandy soil-less finished compost-finished compost/topsoil-pine needle mulch. The basic science behind it is that high Carbon materials like wood and pine needles create a very thin (fraction of a mm) bubble of Nitrogen deficit around them until they get enough N to break down into humus. With larger wood, the surface area-volume ratio is small, so burying it has much greater benefits than this small deficit. With little stuff like needles or woodchips, the surface area ratio is much higher and therefore more of a deficit occurs. When used as mulch, the contact with soil is much lower and the benefits again outweigh the negligible N deficit.

posted 9 months ago
Update time!
Thanks again for all your advice and help.
I'm gonna post some blow by blow pictures if anyone is interested. :)

posted 9 months ago
Also this is my plan for the layout of the bed. Any known issues with plants that are next to each other here? And any suggestions for interplanting of companion plants such as I was gonna put some marigolds in near the tomatoes
15854943245134718297939368371781.jpg 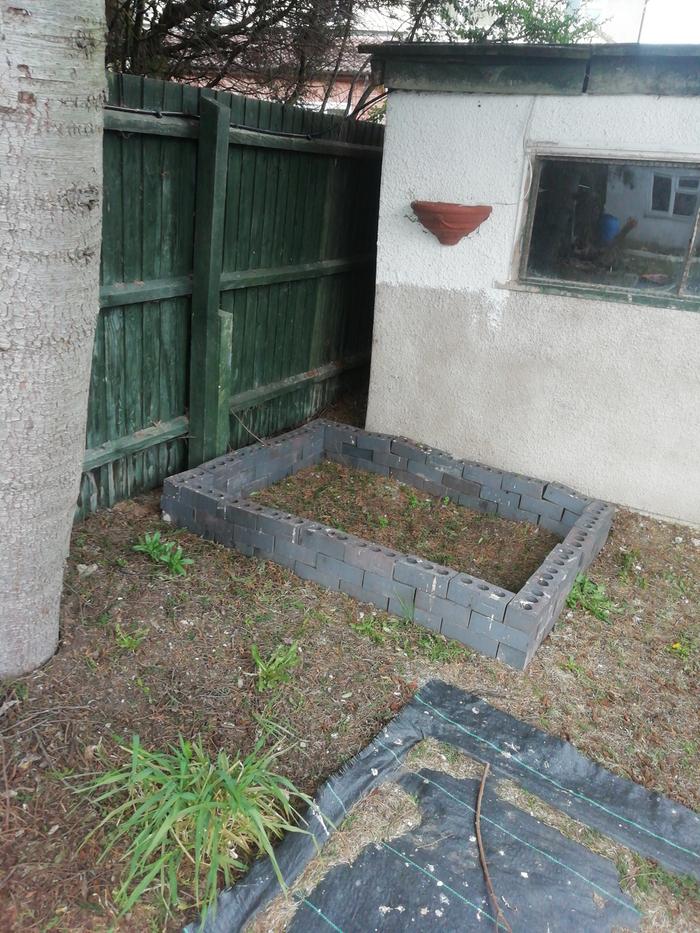