posted 5 months ago
Went our Tuesday to turn the fan on and Ice chunk into the waterier (weather predicted to reach 104 degrees) and notice 4 chickens not in the chicken yard.  Not unusual, they can all get out when they want.  (an on going war they are winning)  Any way I wasn't to concerned, just hoping they were in a good shady spot.  That evening I went to check on them and they were still missing.  It was starting to get dark and this is not normal.  They all go into the coop at night.  I looked everywhere I could think and only found a bunch of white feathers.  No blood, but to many feathers.  I figure something got one of the hens. I did find one of the hens sleeping on top of the coop. It is quite high, so I didn't see her up there at first. The next morning I check hoping at least a couple  would show up, there was a rhode island red, an black ameraucana, and a blond ameraucana missing, so I thought there was hope for the red and black hens.  It's harder to no now.  I think a predator got the blond chicken, but I don't now if the others died of the heat, or something got them as well.  We live among orchards, and use to see foxes, and coyote's, and raccoon, and even wild turkeys.  We have even had trouble in the past with a dog pack.  But I haven't seen even a sigh of any of these things.  I know it is a reality to loose a chicken now and then. I have always felt it is better to live a shorter good life then a very long life in a small cage.  It's very hard to loose 3 hens (including my favorite) in one day. Especially not knowing how they died, if they died.  I just feel like if I knew I could take some extra procession.  Thankfully all but that one who likes to sleep on top of the coop are staying in the chicken yard during the day and I have been making sure to close the coop up at night.  I'm bummed.

Burl Smith
Posts: 492
Location: Richwood, West Virginia
6
posted 5 months ago
Throw us sleuths a bone with a picture of your setup. I had vultures vying with hawks for my chickens and roller-pigeons, I read that fishing line strung high off the ground will keep the avian predators away. Yeah, my bet is you have a martin sneaking thru a small opening in the fence.

posted 5 months ago
Any chance there is a wildlife cam you could set up? A baby monitor would give you an audible warning when the girls are upset.

Unfortunately, if this is predation, you have been "discovered" and may have no choice but to look at mitigating predation with fencing, netting, or electricity is a LGD is not an option. The same way you go to your favorite store, a predator will continue to raid a known food source.

posted 5 months ago
I've lost chickens to far too many predators.  The first time I lost some I thought it might be these guys: 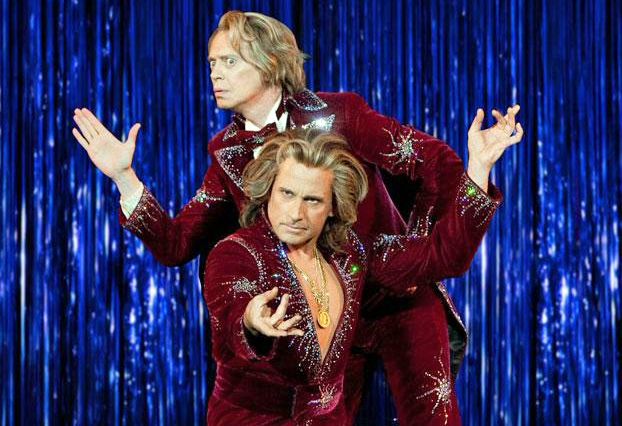 but it turned out to be one of these: 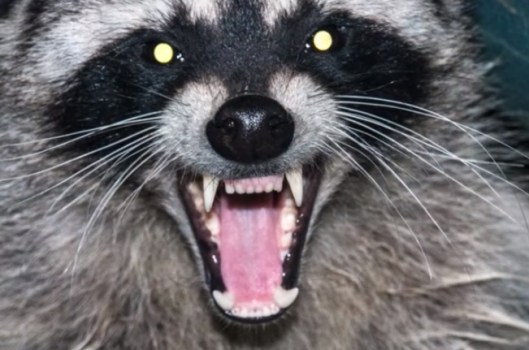 I've lost them to: 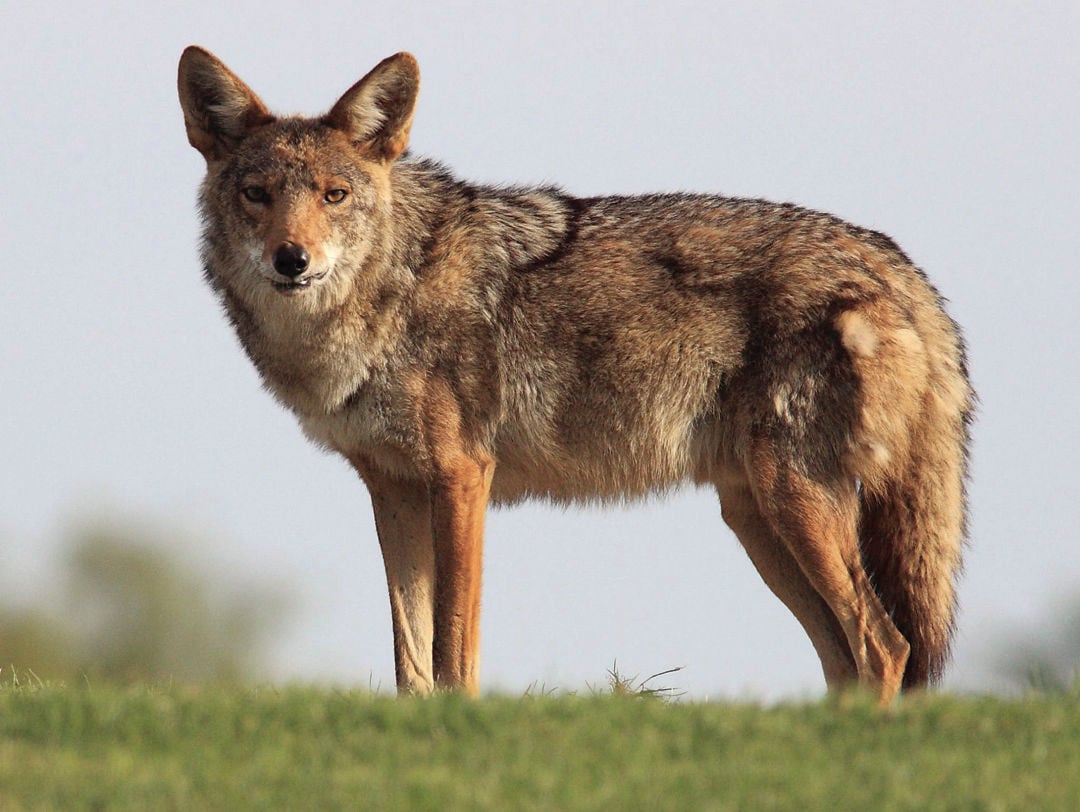 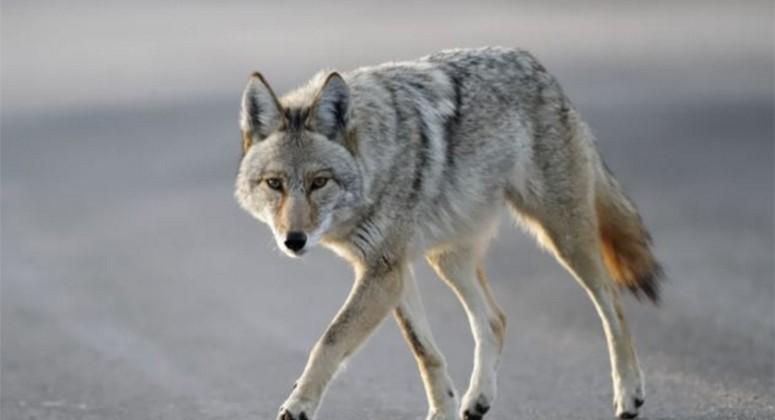 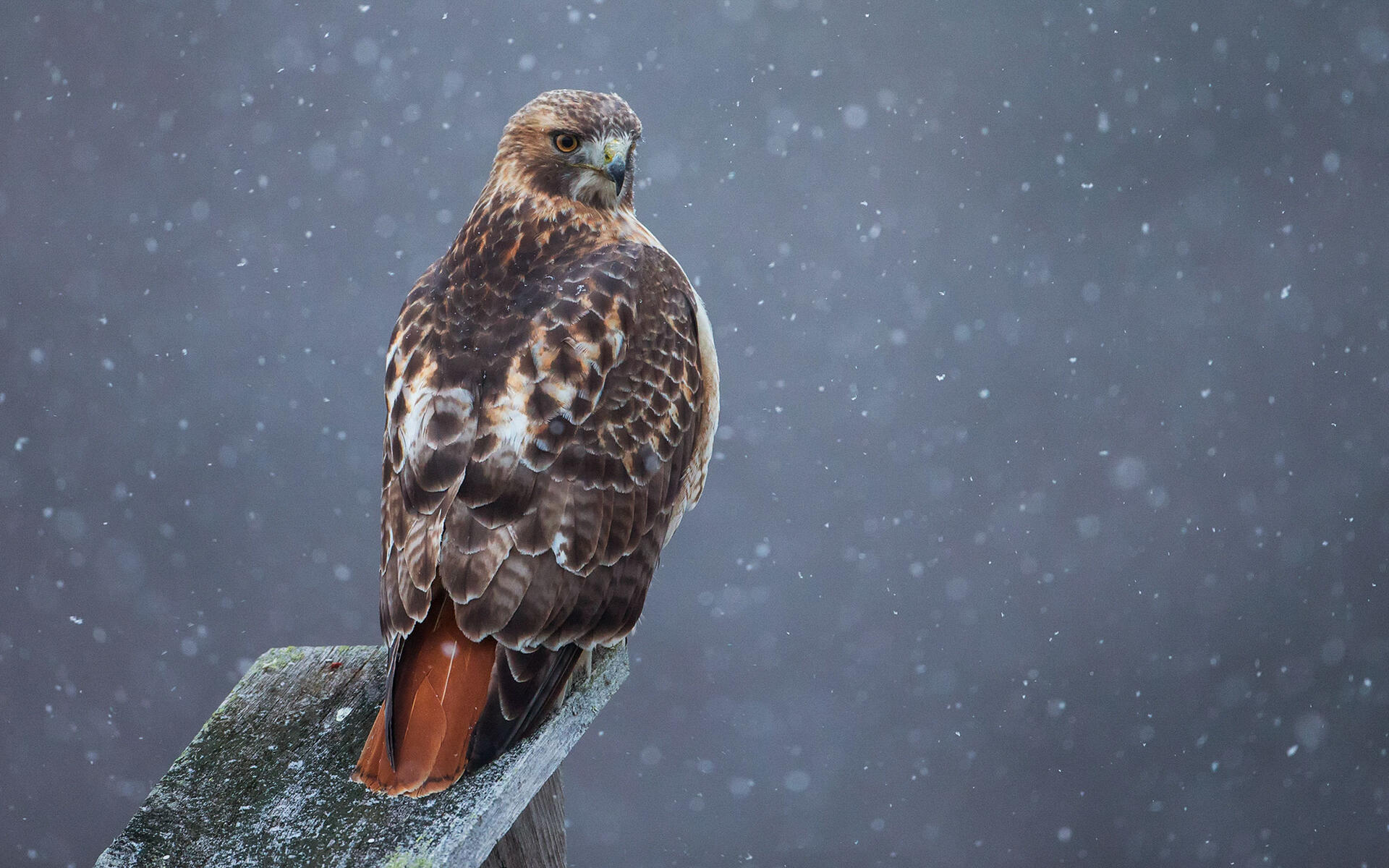 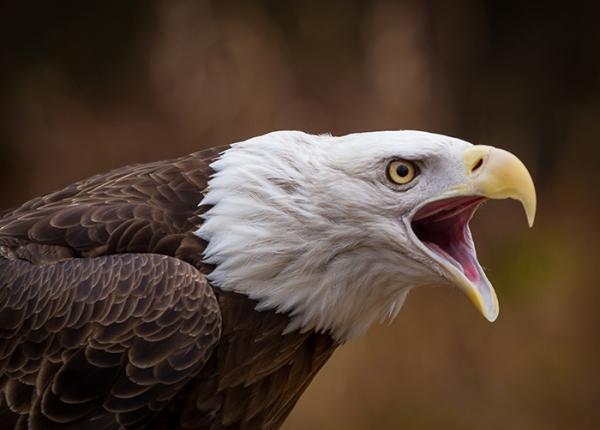 There are almost always clues as to what killed the chicken.  The exception is the eagle because they just pick them up and fly away.  I figure it's my job to keep them safe, but I really hate raccoons.  I still haven't figured out how to stop this predator, but luckily they don't seem to be much of a problem around here: 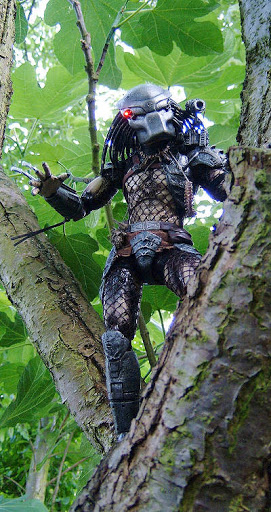 posted 5 months ago
Timothy: raccoons are best dealt with by ensuring the barrier is electrified or unclimbable (metal roofing is my "go to" for the coop and enclosure). Bonus, if you bury it down 12-24 inches, it will keep out anything terrestrial.

posted 5 months ago
Thanks for your support. I liked the pictures, and appreciate trying to lighten the mood.  I will try to take a couple of pictures.  I have lost chickens to dogs, coyotes and even raccoons in the past. But usually some kind of clues were left.  Except the raccoon.  The chickens were being killed in there close coop at night.  My dad did a stake out and caught the bandit red handed.  He scarred the raccoon off, and we reinforced the fencing that attached to the metal frame that the raccoon managed to slip through. Never had a problem at least like that since.
This time the feathers were on the outside of the coop, outside of the chicken yard.  Lots of feathers, no blood, no marks like there was a fight, no prints on the ground.  We didn't hear anything, and my son sleeps in a trailer not to far from the coop.  I don't know if they disappeared Monday night, or early Tuesday morning.  Everyone showed up for food on Monday.  I keep checking on them, I feel like I'm waiting for it to happen again.  The strange thing is the chickens are always letting themselves out of the chicken yard to reek havoc in our yard.  They haven't left the chicken yard since Monday.  I don't know if they sense they are in danger out of there yard, or it's just been to hot to bother, or why, but at least they are staying where they are suppose to be for the time being.
I wish I had a critter cam.  I don't, not working at the moment, so I probably shouldn't get one. Don't have a baby monitor, my youngest is 20.  I have been making sure I close the coop up at night.  I had stopped closing it thinking I had the chicken yard was relatively secure. (six foot fence, and I checked the whole perimeter making sure to patch any holes or weak spots.  I still open the coop and let the chickens into the chicken yard (a horse corral once upon a time many years ago) so they can run around eat bugs, and be chickens. I have also been checking on them several times a day.  This probably doesn't do any good, but I thought if I'm out there, maybe what ever it is will go somewhere with easier picking.  I honestly don't know what else to do.  Thanks again.

posted 5 months ago
Predator issues are very site specific and even animal specific.  I had one raccoon that caused me so much grief.  I had a couple of attacks in the coop that had me spending hours looking for entry points and finding none.  The next morning I got up at 2 and waited.  The bugger had figured out the automatic door.  It was waiting for the door to open in the pre-dawn light.  That and the man-door were the only ways in, so I'd disconnected it.  I'm pretty sure the same raccoon was responsible for killing dozens of my quail the day before I was going to butcher them.  Only one survived and it was a male.

I used to free-range my layers but I found feeding the local wildlife to be expensive, though I did get to see a bald eagle 10 feet away.  Twice now, as I got buzzed the day I brought my girls home.  I think everyone goes through iterations of coop security until it gets locked down.  I'm in a new site now but I've got to figure out how to keep the birds safe from coyotes, eagles and lynx.  Probably bear and fox too and I want them to use the pasture, so it'll be difficult.

All you can do is do your best and keep getting better.  It sure sucks to lose animals, though.

posted 5 months ago
the pictures were taken several days after the chickens disappeared.  The one photo could be an attack spot, but to me just looks like the hen making a nice spot for herself.  It isn't far from the large clump of feathers.
IMG_20200529_201236361.jpg 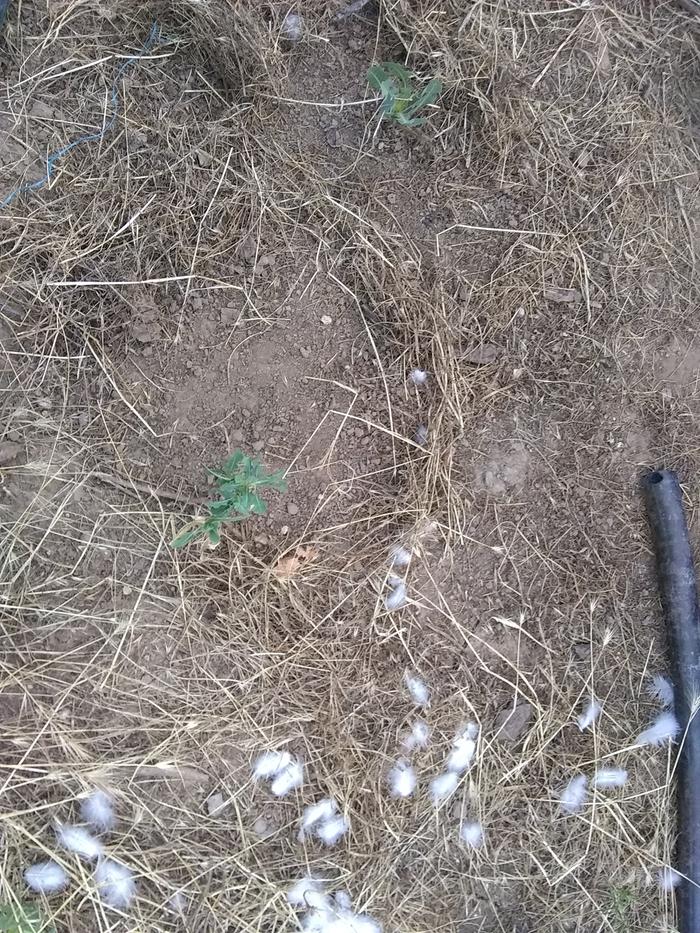 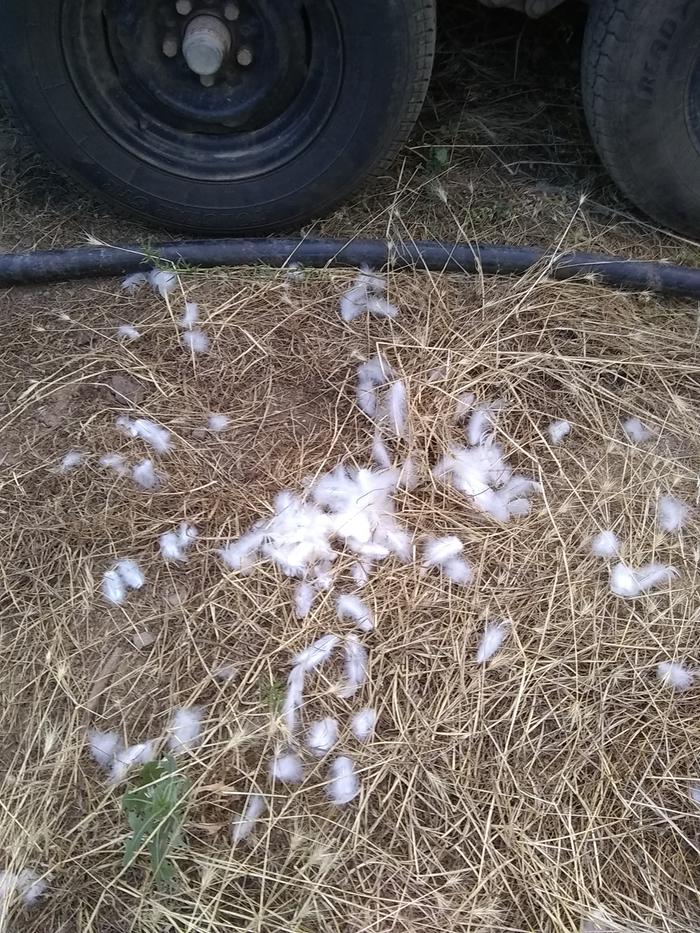 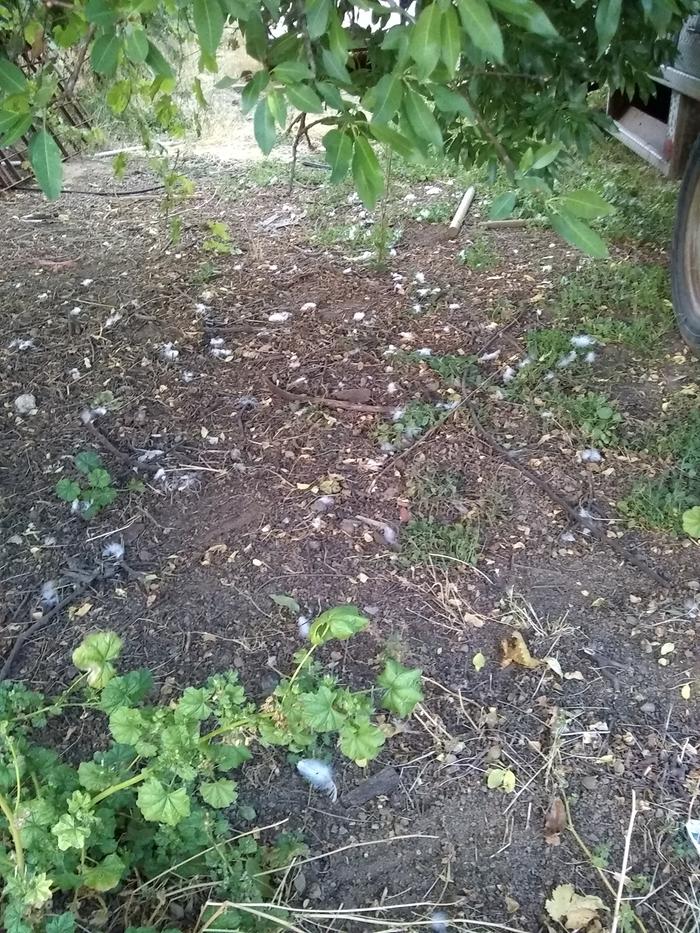