posted 5 months ago
I happen to have a bag of peat and wanted to use it. Why not make peat pots for seedlings?  So I am here to report on my peat pot-making shenanigans.

I vaguely glanced at an internet tutorial, went yeah, yeah, and proceeded to do this thing right.

As suggested I used 2 parts peat moss, one part finished compost to give the plants a boost, and enough water to turn the mixture into a cohesive blend. Lots of mixing! Peat is thirsty.

The genius part of my approach was to use several nonstick cupcake pans that nest together. I put spacers between each to leave enough room for the pot wall, then applied a layer of peat batter to each cupcake cup. Then I put another cupcake pan inside it and stepped on the pans until the mixture squeezed around the edges.

Then, voila! I had a goopy mess of compost sludge all over the cupcake pans, the patio, and my foot, but miraculously nothing resembling peat pots. Although this peat batter adhered perfectly well to my hands, hair, face, and clothes, it couldn't be bothered to congeal when it really mattered. Even when compressed between two nonstick cupcake molds with the force of an, um, lets say 155 lb man.

I did get something out of the deal though, which was searing ant bites on my belly. Then, later, while peacefully texting a friend in my living room, another searing ant bite further down, which precipicated an emergency pants removal.

The cats locked onto the ant. I don't like its chances.

So here I am, dirty, pantsless, and in pain, to say that round one of peat pot pressing is a no go.

Naturally I am going to try again. 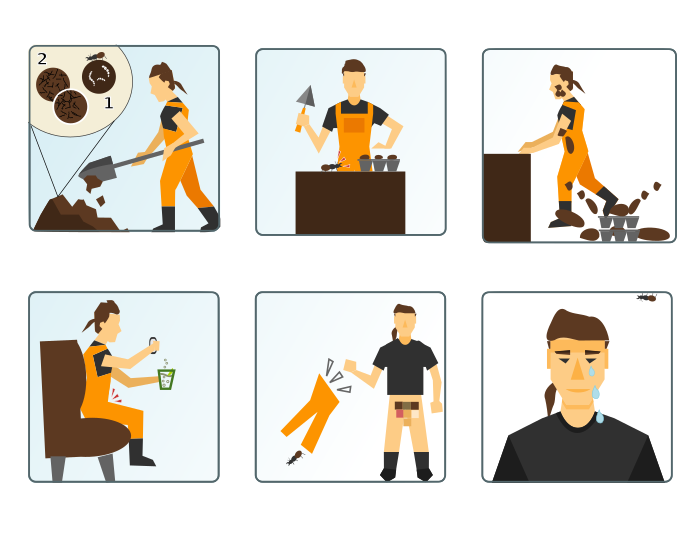 Laurie Dyer
Posts: 79
Location: Suburbs Salt Lake City, Utah 6a 24 in rain 58 in snow
3
posted 5 months ago
Oh my goodness! Thank you for sharing this! I am laughing so hard, the illustration is too funny!
Michelle Heath
pollinator
Posts: 212
Location: WV
46
posted 5 months ago
Since you stated that the peat batter adhered to your face and hands, you may have just discovered the next beauty sensation—Peat Mask.  It also may be effective on ant bites as well.