nearly killed off my husband..

Brenda Groth
pollinator
Posts: 4437
Location: North Central Michigan
29
posted 11 years ago
well My BIL made me this 24 apartment martin house many many years ago and we had it up on a shorter trellis thingy..and it just wasn't attracting the right birds (starlings !!)..so we decided to drop a telephone pole in by a pond that we were forming..(where they dug out for fill for our house..still needs work) and put the birdhouse up on the pole..

well my husband went up with a ladder to see how high he could reach..and as he reaches to top of the pole where son had mounted a platform for the birdhouse..the ladder went, and he went, thank God INTO the pond and landed on a bunch of last years cattails (no ice thank God).

Well then my son fashioned a boom on the tractor and a sling on the house and settled the house on top of the platform and then Ron and I held the ladder while Joel went up and put in a few screws to hold it..until we got the sling off..and then the boom off the tractor..and then Joel put the tractor bucket up where he could get it steadied and climb up into the bucket and scew the house on firmly..

now that I think I can do pictures here I'll try to show you the finished product. 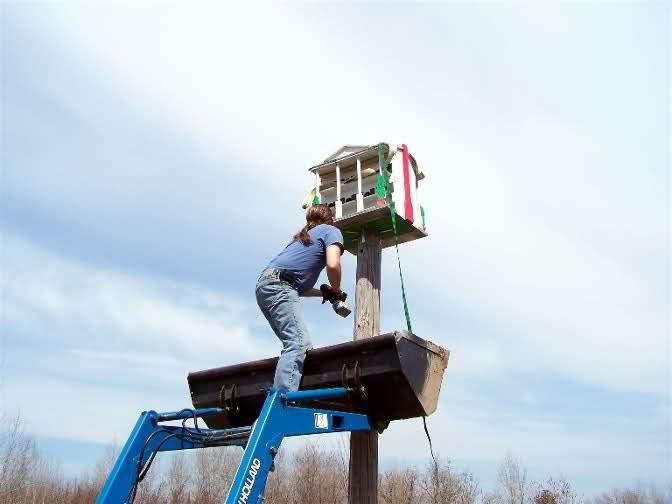 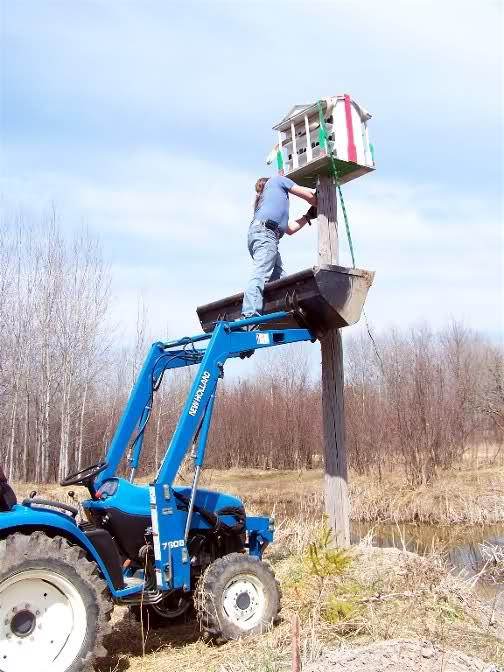 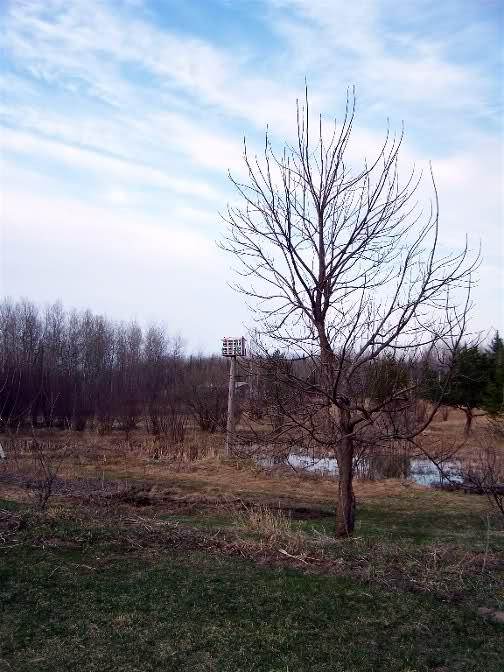 Leah Sattler
Posts: 2603
52
posted 11 years ago
yikes! glad he wasn't hurt! sounds like one of those projects that i don't want to watch. too much gasping and peeking out from behind hands. my imagination always runs away with me about what can go wrong. I'm sure I drive my dh nuts.

Sue
Brenda Groth
pollinator
Posts: 4437
Location: North Central Michigan
29
posted 11 years ago
the first thing my son said, after rescuing him from the muck, is "we should have set up the video camera that would have been worth $10,000."

posted 11 years ago
So, starlings don't like to live higher up?

Susan Monroe
Posts: 1093
Location: Western WA
7
posted 11 years ago
Brenda, tell your son to set up the video camera and then tell your DH to fall in again.  Hey, $10,000 is ten thousand bucks!

Sue
Brenda Groth
pollinator
Posts: 4437
Location: North Central Michigan
29
posted 11 years ago
he just fell...asleep that is..I can't wait until he wakes up so i can show him your thread..tee hee

paul wheaton wrote:
So, starlings don't like to live higher up?


says 10-20 feet here. I would like to get some gourds for them. I read somewhere that works even better than the towers because it is more difficult for the starlings to invade.

Brenda Groth
pollinator
Posts: 4437
Location: North Central Michigan
29
posted 11 years ago
Leah, I bought my first package of birdhouse gourd seeds..so those will get planted appropriately..my sister gave me one gourd years ago, but i painted it and gave it as a gift..

i don't really ind the starlings as they do eat bugs..but I would prefer the other birds to be in that house..i have enough houses that the starlings can use..i have lots of birdhouses and plans to build some more when the garage is warm enough to work in..where my wood shop is.

I was living in Las Vegas, NV about 15 years ago, fixing up my Mom's place so she could sell it.  I grew some large bushel gourds (some about 18" across).  When the weather warmed up the next spring, I put the gourds out alongside a metal shed in the sun to finish drying.

We had a vacant house next door, and someone apparently stole a motorcycle and stashed it there.  The police were investigating, and one officer peered over the growing grapevines on the fence, and stared at the gourds.  He beckoned me over, and ask.....

"What are those... giant mushrooms?"

I think I ruptured something inside, trying not to laugh.  I told him they were gourds, that the Indians used for storage, and handed one over the fence to him.  He said he'd never seen such a thing.

What made it really funny was that a neighbor guy had given me some seed for some 'pretty poppies', which turned out to be opium poppies, and they had reseeded very freely and had taken over a spot about 15 ft square in the corner of the yard -- at that time, they were all blooming like crazy. Interested in hallucinogenic mushrooms, he never noticed the poppies.