Violet Cabra
Posts: 24
19
posted 2 weeks ago
One of my major hobbies during the spring, summer and fall concerns gifting pollinator and perennial food plants. Over the past few years I've probably gifted several thousand plants. Given the volume that I share plants, I've had to come up with methods of doing so on the cheap.

For sometime I purchased commercial potting soil and pots but quickly discovered other alternatives. For instance, as the picture below indicates I now find that almost any plastic container I find in the street to work well as a pot after I cut off the top and stab a few holes in the bottom: 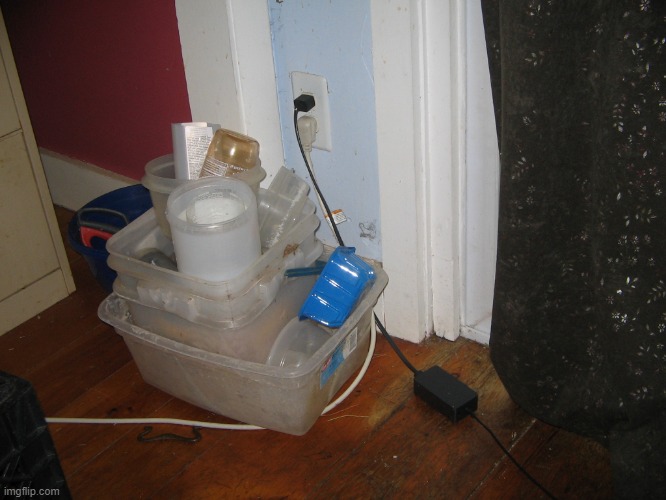 Voila! Pots! Now for potting soil. This proved a problem I spent a long time studying and the results I eventually settled upon as workable surprised me. While working a land project in Middle Tennessee I found to my surprise that many plants thrived growing in straight up woodchips. This surprised me as I had been trained to view ideal carbon/nitrogen ratios as absolutely vital to coaxing plants to grow. Growing vegetables and strawberries in straight up woodchips I began to think that plants might prove more flexible than I had previously believed. This led me to believe that organic matter, good airflow, and water retention were far more important for encouraging plant growth than correct ratios.

This discovery than led me towards devising a very cheap method for kicking out potting soil. I've planted all sorts of herbs and trees in this basic medium and have found that every variety I have tried thrives. Some of the varieties that I've set in this potting mixture include: oak trees, peach trees, apple pippins, daylilies, anise hyssop, walking onions, nettles, catnip, st. john's wort, lemon balm, willow trees, horseradish, goldenrod and many more. I've transplanted plants into this DIY potting mix and watch them thrive for months. Recently a friend gave me some paw paw seeds and suggested I start them in a pot I leave outside and I so I figured I might as well make some potting soil and give a photo demonstration of how I did it: 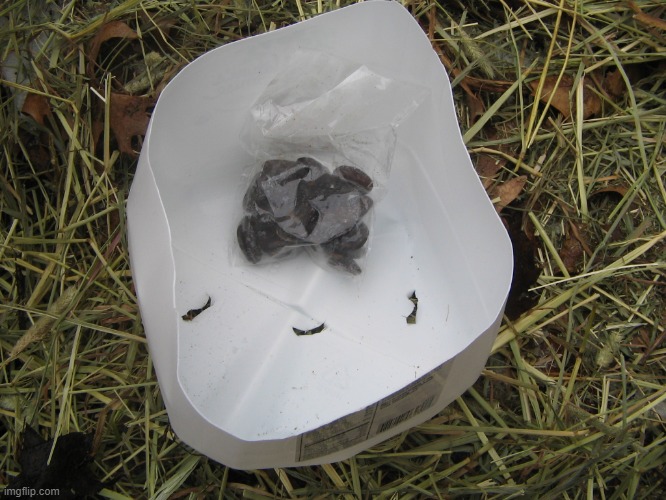 Get a pair of good scissors and some straw or hay. With the scissors cut the hay into portions between 1/8th and 1 inch long and put them into a container: 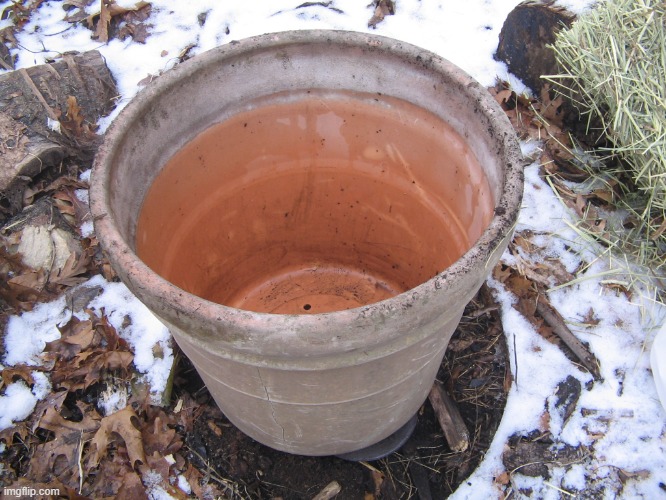 This creates one half of the soil. The hay keeps the soil full of air and makes it impossible to compress the soil like clay. Most seeds can't thrive in compacted soil, and the hay prevents the soil from compacting. 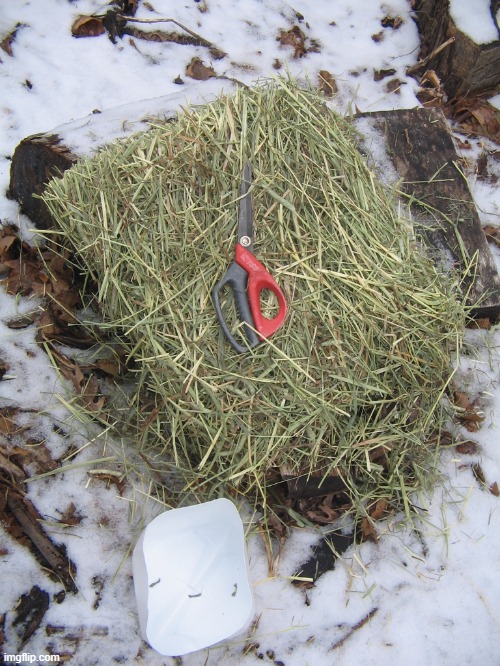 I find that this big pot works great for mixing the soil. One the straw gets all cut up it will look something like this: 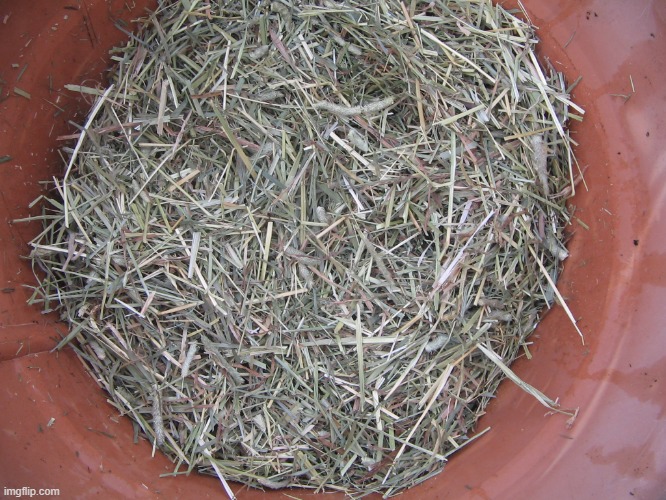 The above image is of my compost pile. Get some compost from the pile and then mix it into the straw. In my years of experimentation I've found that the precise or even approximate ratios of compost to straw simply do not matter in relation to how the plants grow. This creates a mixture that looks like so: 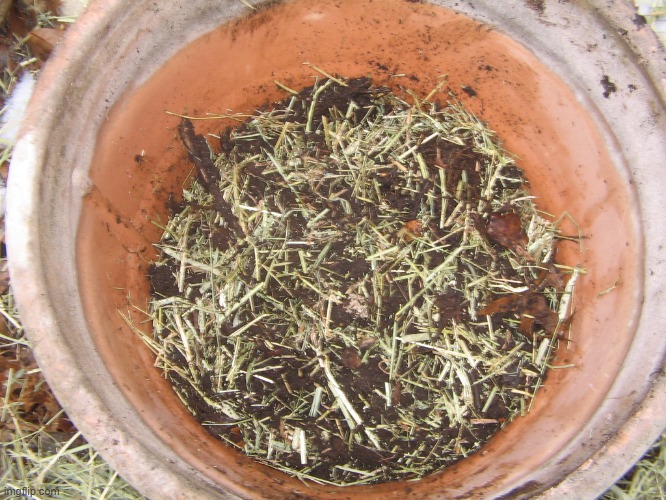 Now that the shredded straw and finished compost have formed a mixture the next step is to simply plant or transplant into this mixture. I've done so with many thousands of plants and I've found that this ad hoc and imprecise potting soil functions just as well as commercial blends, even for long-term potting arrangements. 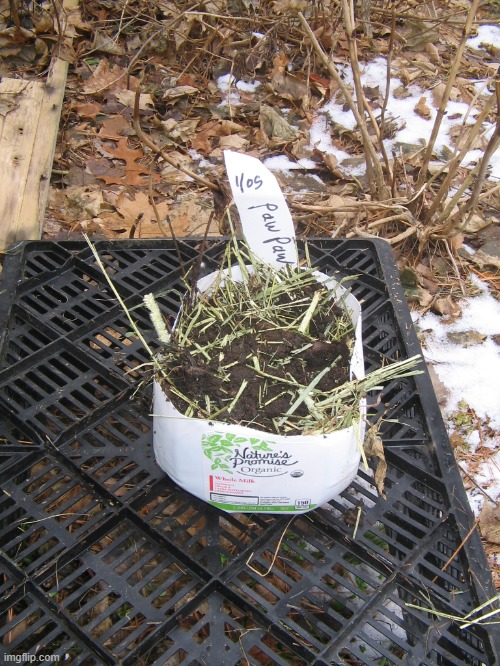 Brian White
Posts: 60
7
posted 2 weeks ago
I think that I'll give it a try in my greenhouse shortly after I get the roof on. Might it work in vertical gardening,  in a diy version of Nate Storey's  "vertical gardens in pipes"?    So, its like you get 4 or 5 ft of 4 inch or 6 inch drainage pipe, stand it vertically  and cut a 1 inch slit down the side,   Then fill it with whatever grow medium you want, fill the pipe, and plant plants up the slit, and you water it from above.  I tried something with soil and lawn mower clippings years ago, in holes in a vertical pipe,  but as the material rotted, the plants got sucked through the holes as the material compressed over time.   Thankyou..
Violet Cabra
Posts: 24
19
posted 2 weeks ago
Brian,

You are most welcome!

posted 2 weeks ago
Great information, Violet! I would really like to try this, but my only concern is how to source hay or straw that I can be sure has not been herbicided with the type that just keeps on. I forgot the name of it now. I wonder what else one could use if one has trouble finding trustworthy hay/ straw.
Anyway, thank you for the information!
Violet Cabra
Posts: 24
19
posted 2 weeks ago
Hi Annie,

Many thanks for the kind words! On first principles I would imagine that any dry organic matter free of allelopathic chemicals would work; dry cattails harvested from a marsh, dry weeds or stalks from the garden, dry grass, or dry chopped oak leaves.  I imagine that even small twigs chopped up could work well.
Bryant RedHawk
gardener

posted 2 weeks ago
hau Violet, wonderful information on dirtless soil. This is just like the first horizon, all organic material, the minerals lie in the second horizon we term top soil, the two layers work together and there are many organisms as their foods are present and available. Kudos for sharing this great recipe for potting soil.

Brian White
Posts: 60
7
posted 2 weeks ago
I wonder if there is any point in adding limestone, wood ash or dolomite lime to bring down the acidity as the straw or hay rots?  If one of us had a good ph meter, we could check during the growing season.

posted 1 week ago
I am totally going to try this, as commercial potting soils or amendments are not available where I am, and I need or want to start lots of plants in 2021. Thanks!

Violet Cabra
Posts: 24
19
posted 1 week ago
Bryant RedHawk, Many thanks for the kind words!

I personally have gotten great results without adding those things directly to the mixture.  That said, I've also had great success adding other things to the basic mixture: earthworm castings; totally rotted out birch wood; wood chips; well-rotted horse manure, etc.  These additives seemed to make a positive effect and certainly added to the volume of the soil.  There was now that I think of it probably some wood ashes in at least some of the compost.  With this basic potting soil recipe I've gotten an anise hyssop seedling to grow something like 18" in a four inch pot.

You're most welcome and I'm delighted to hear that!
Ida Schwartz
Posts: 23
Location: Fergus, Ontario, Canada
1
posted 10 hours ago
I’m trying to fill several large raised beds and what I have on hand is two huge rotting organic straw bales, a lot of fallen apple branches that are in varying states of decay, a big pile of compost a pile of well composted horse manure, and some wood chips.

My thinking was to layer the apple branches in the bottom foot of the raised beds (for water retention, but also because I’m cheap!) and then mix the straw and the compost/manure and toss it over top of the branches. Kind of a modified hugelkultur raised bed.  And layer the well seasoned wood chips over the top of it all.

I’ll build the beds in early spring and tarp them to try and get the elements rotting together nicely, and warmed up. So this year I can hopefully get around our marshy climate and our late frosts, and raise some more of the heat loving veg than I was able to grow last year.

I’m so happy to see that straw and compost had worked for you as a growing medium Violet! I’m curious to know from your experience how these break down over time. Are their additions that I should be adding over the growing season? After harvest?