posted 2 weeks ago
I ordered it Friday. It arrived on Saturday. Anyway, my main saw was a Stihl Farm Boss with an 18" bar.  It now seems to be the Makita.  It is still early in my ownership, but I am impressed.

First, it is a real chainsaw. It feels like a real chainsaw. It acts like a real chainsaw. I spent 45 minutes run time putting it through routine homestead chores.  The chain was lighter than I would have liked. Frankly, I tired out before the batteries did. And, it came with 4, 5 amp 18v batteries. So, I could have swapped out and continued working.  I did not do any formal structured test. My objective was to see how it worked on my homestread.  I counted 100 cuts and stopped counting.  I am certain that I continued well past 200.  I primarily went after blow downs.  The largest cuts were 12 inches. Probably the smallest cuts were maybe 2 inches. The wood ranged from Hickory and Red Oak to Mimosa. I made numerous smaller cuts that I did not count.

In the online reviews, there were complaints about the saw automatically shutting off after 3 seconds.  I had no such problem.

I checked the bar oil, it was about 1/2 empty ( unless,  of course, you see it as 1/2 full).  The unit reminds me of the 42cc Craftsman I have. The bar looks similar. Frankly, the Mikata out performs the Craftsman.

The batteries recharged in about 30 minutes.

posted 2 weeks ago
John, which Makita model is this exactly? I'm looking for a battery-powered chainsaw as well and there are just so many to choose from.

posted 2 weeks ago
OK, thank you! There is a saw with a cord in the house but I consider it unsafe. Or I just consider myself clumsy enough to make a mess with it.

I will post something a little more detailed in a few days.

posted 2 weeks ago
Pic of saw 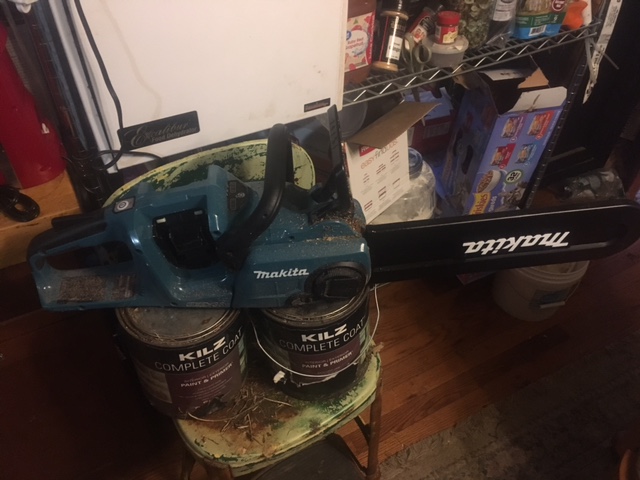 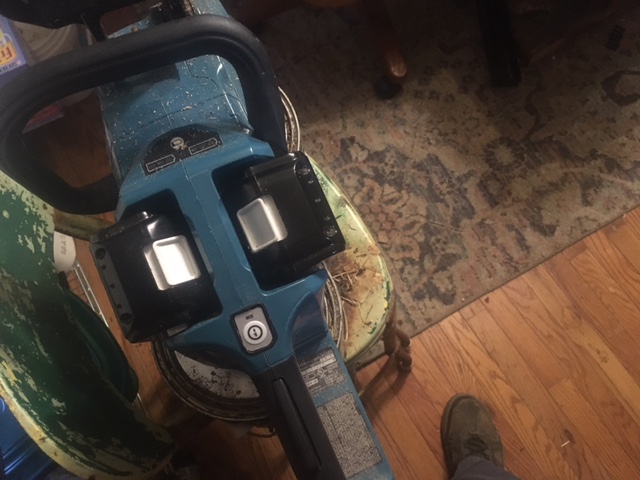