Look what I found!

posted 2 months ago
On a winter stroll through Moscow, I happened upon a lot of leguminous seed pods littering the ground. I looked up, and saw a tree with many more pods on it. I collected them off the ground and took them home, and I identified them. As BLACK. FRIGGEN. LOCUST! This is a tree that I had not able to get a hold of. Now I have it! 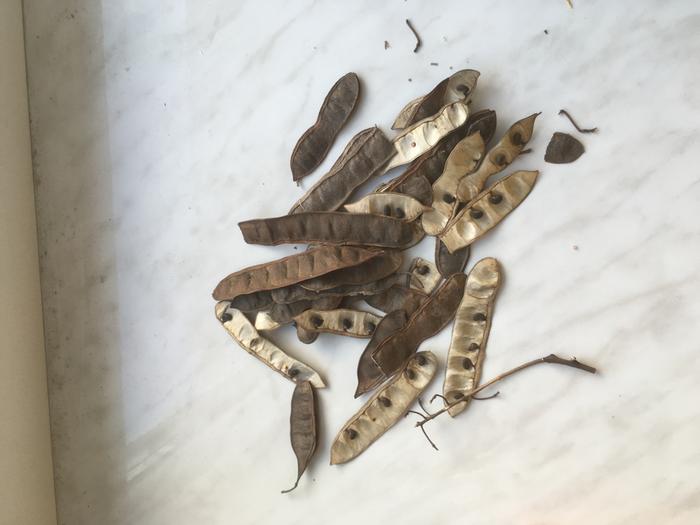 posted 2 months ago
Whoops, I forgot to ask the question I had. How do I get the best germination success with these seeds?

posted 2 months ago
I had to giggle when I read the excitement in this post. Those things are ALL OVER the place here.! Then I saw where you are located, and I realized you did indeed find a treasure!

Internet searches turned up many different sites and Youtube videos for germinating the seeds. Surely you'll be able to find a method you can use successfully.

Good luck to you!

greg mosser
pollinator
Posts: 525
Location: the mountains of western nc
127
I like...

posted 2 months ago
best procedure for most cold-climate trees is cold stratification. plant in a pot and water it, then leave it outside for the rest of the winter. cover with something semi-permeable if you might have birds or what have you digging around in there. leave it somewhere out of direct sunlight so it doesn’t warm up too much during brighter days.
Rebecca Norman
gardener

posted 2 months ago
Black Locust seeds (Robinia pseudoacacia) don't seem to need stratification in my experience or in what I've read.

I started some from seeds (though to be honest the seedlings are still small and I transplanted them last year and don't know yet whether they've survived the winter). The issue with these seeds can be that they are very tough and might not imbibe water. Suggestions I've seen include pouring boiling water over the seeds and leaving it to cool to soak them overnight or longer; nicking the edges of the seeds with a nail clipper before soaking; or scarifying by shaking vigorously in a jar lined with sandpaper before soaking. Actually, I found that when I soaked them in warm water, several did swell and later germinate; like you, I collected seeds from a tree, and had plenty so I didn't mind a 50% rate, though I think maybe more than 50% did swell by normal soaking. Nicking with a nail clipper is a little fiddly, because the seeds are rounded, and you want to only nick the black coat, not the white living seed inside, but it can be done. I did try the boiling water thing one time; other times I was reluctant to do something that would normally seem so lethal to a living thing.

So best would be put a few in several dishes (count them equally and report back to us, too!) and try different soaking methods. Drain and change the water daily for a couple days, and then when a few start to swell, drain out the water but keep them all damp, for example by putting a wet paper napkin folded over them, and a loose lid on the container.
Soak some in warm water.
Soak some by pouring boiling water over them and leaving it to cool.
Nick some with nail clippers before soaking.
Scarify some with sandpaper facing inward in a jar before soaking.

And don't forget to come back and let us know what worked!

Robinia has been taken all over the world and naturalised for decades. I think I read it's the major forestry tree in countries like Hungary...?

posted 2 months ago
Thanks for the info, Rebecca.

I’ll do some tests.

posted 2 months ago
I have the best luck leaving them in the refrigerator all winter.  When I'm ready to plant in the spring, I boil a pan of water.  As soon as it gets boiling really well, I shut off the heat and put the seeds in.  Leave them 24 hours or so.  The ones that swell, I plant right then.  If any don't swell, I do it again.  I've had very good results that way.