posted 1 month ago
I was a #ClimateChangeRefugee for the 2020 January and February. Fortunately, we escaped from fires in Australia. The good thing was we were away from the smoke in Australia, so my kids' lungs are clean at the moment. Inhaling PM2 and PM2.5 would have been detrimental to their health as the particles travelling into the bloodstream and marrow in bones. Unfortunately, I lost my job due to being away unexpectedly, but that was expected; I gave that freedom to my boss on my first communication with them.
Now we have Covid-19, and it is spreading fast. Leaving aside its rate of casualties and spreading ability against other pandemics, I wouldn't put my family at risk and will take every precaution I can.
Australian society's resiliency is very low against these kinds of crisis. I have seen and experienced this a lot. We are not like Cuba or Eastern European countries that have seen the worst. This fragility is very concerning, as we have seen on the incredible #ToiletPaperEmergency. This shows that Australians basically don't know what to do in case of a crisis.
This fragility of Australian society is really worrying me as the new generation is growing up even less resilient. The new generation is not experiencing any valuable lessons to learn resiliency.
Learning resiliency is not easy. You have to either experience the worst of the worst or a wise teacher teach you this. I guess the profession of Life Coaching born out of this necessity. In Asian and Middle Eastern countries, the life coaches are your parents, boss, teachers, friends, and neighbours. You learn life by interacting with wiser and experienced people you respect. Respect to elders and teachers imprinted into our brains by our parents. In Western countries, relationships are reduced to nothing. You have to be politically correct and try not to offend anyone; you can't really teach life to your neighbour's kids. You would be labelled as the angry neighbour on the street or the bad father in the family.
In conclusion, yes, I want the best for my kids, but at the same time, I want them to learn resiliency. But, unfortunately, I don't know how to teach them resiliency as I don't have the support of the robust community I was once lived in. There are no grannies and grandpas, uncles or aunts around us. No wise teachers or elderly neighbours that we communicate openly.
One thing I can do is to prepare them for what is coming. Gardening and house chores are one thing I can teach. But how am I going to make these things interesting?  At the moment, homework and sports are taking most of their time. I think I have to make time and get them into the garden.

I hope my kids' life turn out happy and resilient; I will try my best. 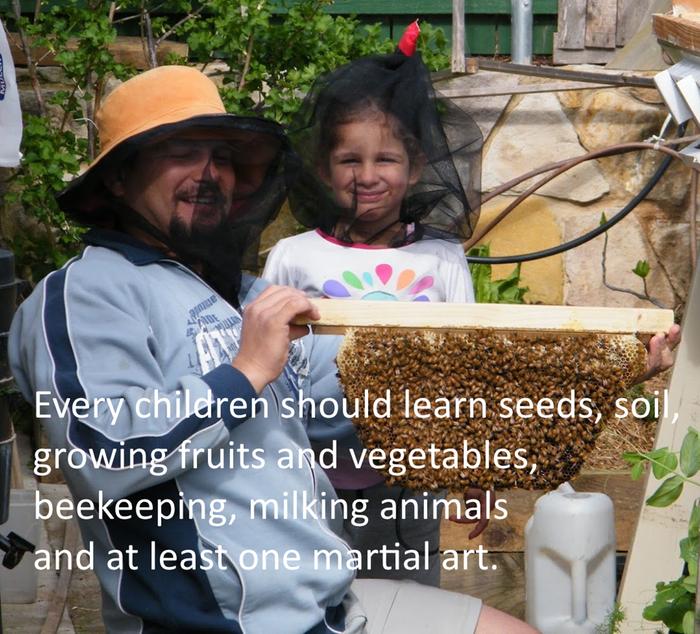 Gurkan Yeniceri wrote:Gardening and house chores are one thing I can teach. But how am I going to make these things interesting?  At the moment, homework and sports are taking most of their time. I think I have to make time and get them into the garden. I hope my kids' life turn out happy and resilient; I will try my best.


One thing I've observed, is that children are strongly influenced by the attitude of the parents toward a thing. If the parent is enthusiastic and has an obvious love of doing something, the kids will naturally want to do it too. I know a lot of adults who grew up on farms, but never wanted to be farmers because their parents were constantly worrying and fretting rather than loving farming. Kids seem to learn more about life from our attitudes than anything else.

I know it's natural to want to make things interesting or fun for kids, but I think one important life skill toward resiliency is learning how to do something simply because it needs to be done. That requires self-discipline and a sense of responsibility, two life skills that seem to be neglected these days.

posted 4 weeks ago
I quit high school to join the Navy at 17,  but my parents... You could do that back in the olden days! My parents were less than enthusiastic about cutting the cord and letting me solo. I reminded them I had quit school and had no job to speak of. They signed saying, "I hope you can make a man out of him."
When I got to bootcamp it still hadn't sunk in that I was on my own. Decisions I made from this day onwards would affect me on many different levels I hadn't even dreamed of. I quickly learned lessons in boot I had ignored at home. When that fella with the anchor on his collar tells you to do something you don't roll your eyes and ddddddrag yourself over to do a half assed job. You don't belly ache and grumble either. To top that off, you're gonna shave daily, get a haircut weekly and wash your own clothes.
I can tell you folks from personal experience that a military enlistment will make one grow up, even if only for one enlistment.  On the other hand, I've seen sailors who had mommy call when the blonde haired, blue eyed, apple of mama's eye didn't get his way. Yea, that went over well...
When the military isn't an option, tough love is. Teach children to fish and then let them. Resist your parental instincts to protect your baby. Let them solo early. Let them get into a fight. Let them experience the results of their decisions. Let them set goals and see them through without your interference. Show them the path and let them walk their own early in life.
I'm not talking about kicking them out at 18, but by 18 a kid should have a pretty good idea what their likes and dislikes are, enough to think about a vocation while drowning strips of potato in boiling vegetable fat.
Years later it occurred to me that the best thing my parents ever did was birth me and leave me be. I mostly did that with my kids. They both have meaningful employment, neither have been in jail, their paying their own bills and they're both enjoying life in their own way. As far as parenting goes, not bad at all. My son took a launch or two but the engine finally kicked in and the rocket was successfully launched.
Let your child do their own fighting. Let them learn how to form relationships by trial and error. Guide them, of course, but let them do it.
Do all of this early in their life while they're in diapers. Give them jobs like picking up toys. If they do good reward and praise. If not so good, the child has to know why. If any punishment  is doled out, make it swift, befitting and forgotten. Don't punish when you're angry. Calm down first.
Resilience will be a byproduct of flying solo early in life.