posted 3 months ago
A few years ago I crossed a pie pumpkin and a zucchini with a spaghetti squash.

I hadn't been able to get any spaghetti squash to produce and I think I had maybe five seeds left. So I planted them and got one survivor, from which came my current spaghetti squash seeds and one deliberate cross.

I kept seeds from both. They may have crossed with each other, or with the spaghetti squash.

This spring I planted these seeds in early April and nearly all of them died. One survivor handled several freezes, heat and high UV, lack of water, and I just harvested the first zucchetti. It currently has more female blossoms, which is why I harvested now. The skins are hard and the squash changing color.

Six more were planted later in the season and are just flowering. Two spaghetti squash were also planted in the patch.

This year I'll be removing all the male flowers from the spaghetti squash so they have to cross pollinate with the crosses. I'm looking for a drought and cold tolerant spaghetti squash with the continuous production of the zucchini and the ability to keep over the winter.
IMG_20210707_202121199.jpg

J Youngman
pioneer
Posts: 91
Location: North Texas, Zone 8a, Black Clay
6
posted 3 months ago
Sounds like you got lucky only having one survivor twice in a row! Very interesting project.

posted 3 months ago
The one survivor the first time was the last of the packet--I have a rule for myself that if I don't get seeds from something by the time I run out, I don't plant that thing again. So I babied the heck out of it, which I normally don't do.

This year I planted the first time in early April (average last frost date is May 15) so I didn't expect any of them to survive. That one did is amazing, and I'll take it!

posted 3 months ago
I opened up the first of the zucchetti. We had it for lunch. The second is in storage to see how long it lasts.

The skin was incredibly hard, similar to the full sized seed zucchini, which I need to break open with a sledge hammer or on the cement steps. The flesh was green instead of orange or yellow, but still did the spaghetti squash thing. Most strands were an inch or two long, but they were there. The taste was slightly stronger than zucchini but different from both parents.

posted 2 months ago
8 new zucchetti ripening on the one plant and more coming. I'll remove all as they start to turn orange so hopefully get even more this season. Picking early I won't get as many seeds, so it's a risk, but I think worth it if I can gauge the productivity of the plant. The first zucchetti from July is still sitting on the shelf and showing no signs of rotting.

posted 1 month ago
I have 9 (?) zucchetti in storage. There are actually two plants there, one with a larger fruit shaped more like a zucchini and the 2nd with the smaller rounded fruit. The zucchini type is softening in storage already, so in that sense the traits are reversed. We're eating the smaller fruit like zucchini as they come on.

One of the plants turned out to be a yellow squash cross of some kind. It would have the spaghetti squash genes and either pumpkin or zucchini as well as this other thing. I don't plant yellow squash, so it must have been pollen from somewhere else.  Considering the short duration of the project, the cross has to have happened last year.

posted 1 month ago
EXCELLENT write up and follow through. Thanks Lauren! I love these types of threads.

posted 1 month ago
Wow, this is a great project, and I'll be watching with interest.

I think that warty yellow gourdy thing looks dubious. I've read that zucchini, spaghetti squash, delicata, some orange (but not all) but not very tasty pumpkins, and ornamental gourds are all the same species, C. pepo. All the others are edible and their crosses are usually edible, but if crosses involve an ornamental gourd they can be bitter and actually toxic. For that reason (and because they don't interest me) I've decided to make sure not to grow any of those ornamental C. pepo gourds. So you might want to make sure that yellow warty fruited plant gets no male flowers and can't pollinize any of the other zucchetis etc.

posted 1 month ago
I won't be keeping seeds from anything pollinated at this point--I don't want to encourage late production. Those I will be keeping for seed were mostly pollinated by hand.

When blossoms first started appearing earlier in the season I looked at this one and the female fruit looked very similar to the zucchetti. I thought it WAS a zucchetti, or I might have culled it.

It looks a lot like a straight-neck yellow summer squash that's been allowed to go to seed. We'll see. If it's bitter I won't keep seeds from it. There are a number of ornamental gourds across all the squash families.

My "traditional" zucchini is a semi-bush. Toward the beginning of the season it's a bush form, then it sprawls out and takes over. The high production zucchetti seem to have this same habit. The two "vining" zucchetti have only produced two fruits each for the season, so won't be kept for seed.

posted 1 month ago
The two that I thought were spaghetti squash turned out to be pumpetti. Still two spaghetti squash plants, but they're just barely getting male blossoms so probably not time for anything to mature.
IMG_20210919_104336326.jpg 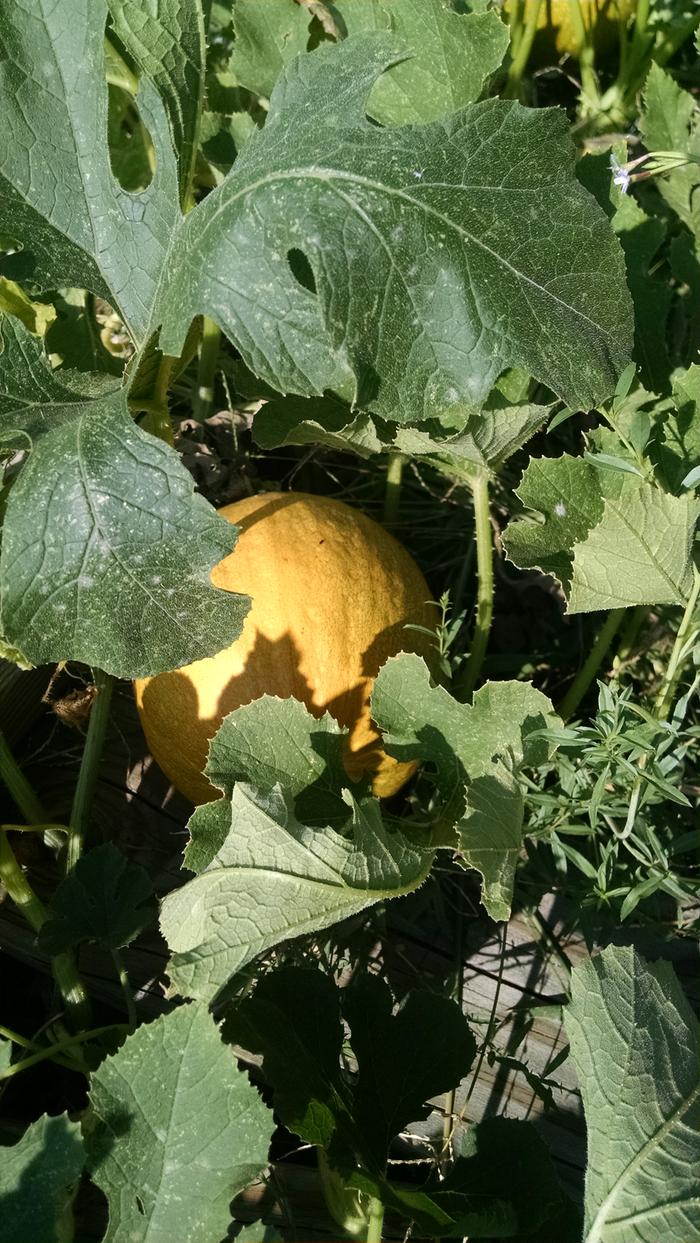 posted 2 weeks ago
The spag x yellow was rotting (touching a zucchetti that had rotted from the inside) so I opened it up and cooked it.

The flavor was different from the zucchetti but it had green flesh so probably spag x zuc x yellow.

It had spaghetti strings, longer than the zucchetti I opened up earlier in the season but thinner, more like angel hair pasta. Not bitter at all. Quite good. After eating these I notice that normal zucchini has no flavor. If we can breed back toward the rounded shape this might be an interesting addition to the project. It may have contributed pollen, but with only one fruit for the season I'm not putting the seeds in the project bottle. Two strikes; shape, and low production.

Three of the squash have been lost to rot, but two were infected by the third. That one looks like it rotted from the inside, so probably damage to the stem area. Not a winter keeper, so I'm not keeping seeds even though it was the first of the season.