Paula Edwards
Posts: 411
posted 7 years ago
My trellises always tip over or the peas refuse to climb on them.
What trellises are you using?
I recently simply cut some branches of a tree stuck it into the ground and tied it together with a rope. Looks good but peas dont really climb well on it. Then I stuck some smaller branches around and the weight of the peas are tipping everything over.
I always have problems with tomato plants and other climbers too. As mcuh as I like the idea of growing up, I didn't find a great trellis system so far.
Shawn Harper
Posts: 409
Location: Portlandish, Oregon
24
I like...

posted 7 years ago
I usually string train my zone 1 climbers
Jay Green
Posts: 587
8
posted 7 years ago
Cattle or hog panels for the big stuff and welded wire 1x1 fencing for the peas, beans trellised on the corn. All fencing materials stabilized with T posts.
Paula Edwards
Posts: 411
posted 7 years ago
I must have a look for both, cattle panels are a bit expensive though they want around $100 here.
Leila Rich
steward

Posts: 3999
Location: Wellington, New Zealand. Temperate, coastal, sandy, windy,
97
posted 7 years ago
Here's my tools:
Whatever I can get hold of that's 'stakey': bamboo is great, but my favourite is the old galv cold water pipes.
Old cotton or natural fibre sheets

My peas are't staunch like tomatoes, and while their wee tendrils will latch on to stuff, I find they need to be pushed around quite a bit.
I have warrattahs/star pickets supporting windbreak cloth all around the main garden. It gets really windy...
I grow snow peas at the Southern end (Southern hemisphere...), inside the windbreak.
I poke thin bamboo between the warrattahs and run strips of sheet around the outside of the peas.
I need photos

Indeterminate tomatoes are something else. I find they need a really full-on setup right from the start
I stake 'em, but I'm sure a cage would be better. The sheet strip gets wound around the whole plant and stake and the lot goes on the compost
Jay Green
Posts: 587
8
posted 7 years ago

Paula Edwards wrote:I must have a look for both, cattle panels are a bit expensive though they want around $100 here.

WOW!!! They run around $22 ea. here and the investment is well worth it, as they are multifunctional and store flat, last forever.
Ivan Weiss
Posts: 183
Location: Vashon WA, near Seattle and Tacoma
posted 7 years ago
Concrete reinforcing mesh, which usually comes in 20' x 7' sizes, gives more bang for the buck than hog panels.
Marc Troyka
pollinator
Posts: 371
Location: East Central GA, Ultisol, Zone 8, Humid
16
posted 7 years ago
I wouldn't use a trellis for tomatoes, cucumbers, melons or pumpkins. For raspberries, they'll climb on anything but since the plants are long lived perennials it's best to plant them next to something fairly permanent like the house or a fence. Corn is the best trellis for summer beans, and for peas since there's nothing tall/sturdy enough that I'm aware of that grows in the same season as peas, I'm just going for bush peas instead.
William James
gardener

Posts: 1029
Location: Northern Italy
23
posted 7 years ago
I have an idea about tomatoes I'd like to share, get feedback on.

First, tomatoes, if left to themselves, wouldn't climb anything. So, if you want them to climb something, it's more like sticking them on something straight for picking purposes.
This is usually a pole, or a string that you kind of wind around as it goes.

The ease of picking the tomatoes here is the determining factor. Nobody wants to fish out tomatoes under a bunch of leaves and weeds.

The other observation is that tomatoes have special "elbows" that connect stem pieces. These elbows are very important for crawling along the ground. If an elbow comes into contact with the ground, the elbow sends out roots, increasing the plant's capacity to get water and grow. It also sends out new shoots, which can constitute whole new plants. I'd say that this natural tendency is something we could work with. The plant increases its mass and finds more ways to feed itself. Another observation is the amount of foliage, tomatoes grow lots of leaves to shade out things below it. A conventional cultivation of tomatoes has bare earth under the propped-up plant. I can't imagine the tomato plant is happy about that. You could mulch, but why not let the tomatoes shade things for itself?

My experiment this year was to create a short tee-pee. I knew a tall one would be useless, because I'd be fussing with it all the time to get it to stick to the poles in an effort to get them to go high. My objective was to raise the tomatoes off the ground so they wouldn't be prone to disease and to make it easy for me to pick. At worst, I'd have to stick my hand in a little.

Once I did the first attachments, the plant stayed in one place, shaded out everything below it, sent out it's elbows and made new plants and got the nutrients it needed to stay healthy. From that point on I just picked. I didn't even water that much. We were in serious drought but the plants did okay nonetheless.

There is another discussion specifically about supporting tomatoes on this forum. In that thread there is a link to Skeeter's cage. The tomato grows thru a two-layered grate.
William

Posts: 1029
Location: Northern Italy
23
posted 7 years ago
Here are two supports you might be interested in. Both use the hanging string trick.
Care of these people: autosufficienza.com
W
DSCN6518.jpg 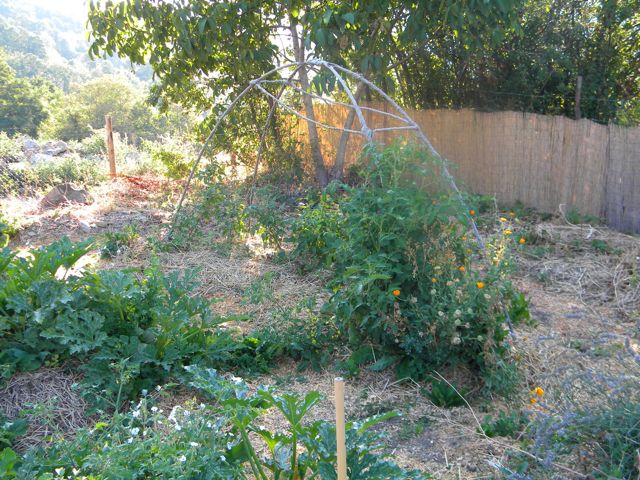 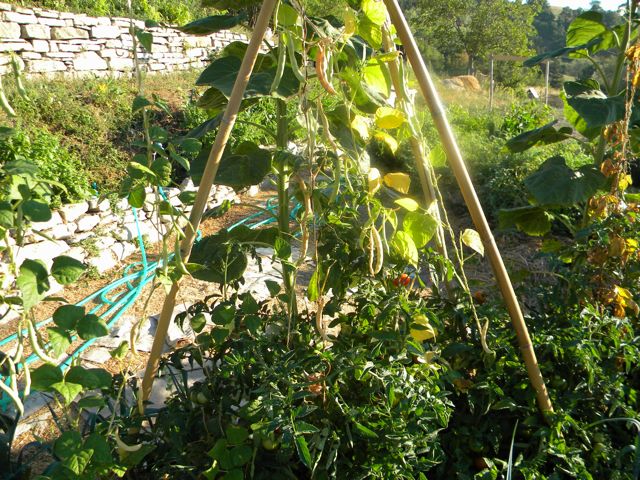 Paula Edwards
Posts: 411
posted 7 years ago
You're right with the tomatoes. They don't like stakes. I think many problems with trellises come because they are not sturdy enough. My tepes tend to to tip, some were too high too.
In our old garden I had something great for cucumbers. It was an A but had hinges on the top that it can be folded away. It was made out of old fencing timber.
I don't know weather this would work for tomatoes too. (I actually could ask the children... they discovered woodworking)
I must ask the price of reinforcing mesh but I guess that here it is very expensive too.
Alex Ames
Posts: 414
Location: Georgia
15
posted 7 years ago

This is what I use in my cages. That way I can inter-crop tomatoes all over the garden. These cages also
can be used for beans and peas by planting in a circle. I have had success growing black cherry tomatoes
along my welded wire fence in a kind of espalier method taking the vines in both directions along the fence.
One plant filled up a good sized section of the fence and all the tomatoes are at waist height.
John Polk
steward

Posts: 7926
Location: Currently in Lake Stevens, WA. Home in Spokane
315
posted 7 years ago
If you need many, it is more economical to buy the concrete reinforcing by the roll. Home Depot has it in 150' rolls.
Or, a concrete company may be willing to sell rolls even cheaper.

John Polk wrote:If you need many, it is more economical to buy the concrete reinforcing by the roll. Home Depot has it in 150' rolls.
Or, a concrete company may be willing to sell rolls even cheaper.


I was talking about concrete reinforcing wire in general. What I am using came in a roll and it wasn't 7' tall.
It is still expensive to buy a roll of that stuff but it will be with you quite awhile. I used welded wire for beans
in one of my beds last year. I put it in a zig zag pattern and planted other stuff in the triangles that created.
The problem with that was once the vines were dead they were not easily disposed of. Using something that
can be composted or easily pulled free of the vines would be a better solution.

Alex Ames
Posts: 414
Location: Georgia
15
posted 7 years ago
I had a few pea seeds left that were getting old so I planted them and virtually every one came up.
My trellis consists of two short stakes with a cane pole at the top and eleagnus whips for the peas to
climb on.
IMG_1708.JPG 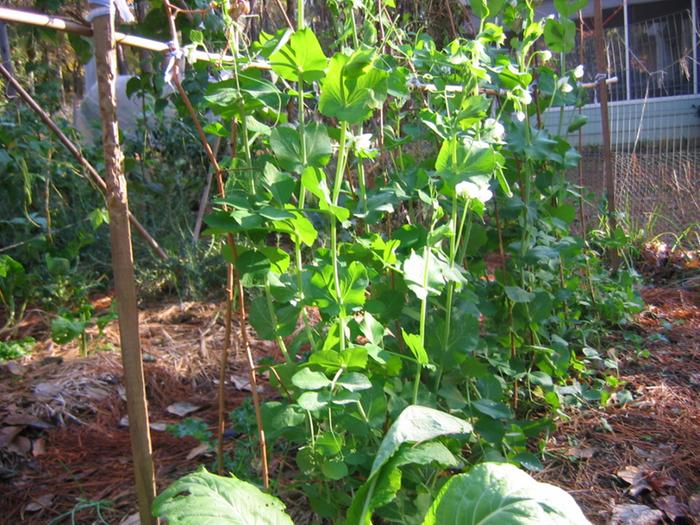 Posts: 1
posted 6 years ago
There are several kinds of fencing that can be used, ranging in price from $25 to $90 for a 16 foot length. The cheapest is called hog panels or livestock panels. Be sure you're asking for the right type of fencing.
John Polk
steward

Posts: 7926
Location: Currently in Lake Stevens, WA. Home in Spokane
315
posted 6 years ago
Carolyn Male, author of "100 Tomatoes for the American Garden" says that in all the years, she has never staked her tomatoes. "I just let them sprawl."

I have a nephew who has a 'picnic spot' under a huge shade tree. He planted some cherry tomatoes near there several years ago. They keep spreading, and reseeding. They now cover about 3,000 square feet! Guess what's on the menu for summer picnics?

Posts: 946
Location: 6200' westen slope of colorado, zone 6
67
posted 6 years ago
good topic here, I am always looking for better ways to trellis my crops. mainly peas, tomatoes, green beans, cukes, and dry pole beans. here is what I use at this time, though I always want to find a better way-

tomatoes- field fencing rolled in a cylinder. I find about 7' of fence makes a cyliner 2+ feet in diameter. If you can find an old livestock fence to take down this is best because the wire is thicker. I plant 2-3 tomatoes in each cage, and let them grow/sprawl/collapse as they will. Very low labor once you make the cages. Doesnt mess up the natural growth habits of tomatoes, but does keep the fruit off the ground for better quality.

peas, green beans, cucumbers- metal T posts with bailing twine strings running horizontally every 8" or so. this is easy to pull out and store at the end of each year, and setup is quick. the plastic bailing twine is super strong, free, and doesnt heat up in the sun. I alternate green beans and cucumbers in the row so they are somewhat overlapping each other on the trellis. They have the same planting and harvesting dates, and growing together, seem happy for the companionship. Peas are a different season so the are solo.

dry pole beans- grow up the corn stalks in the Three Sisters bed. I know, not really trellis, but it sure works!

keep the good ideas coming folks, its getting real close to trellis time!

Alan Smithe
Posts: 4
posted 6 years ago
I use the 5 x 3' concrete reinforcing mesh panels tied to 8' pvc pipe with tie wire. I started doing it in Oklahoma where we'd have F5 tornadoes, and hailstorms that'd riddle the ground with 3' deep holes. This method was indestructible and could withstand 80 mph winds, which is great because I hated having to reset up the traditional trellises. I stick a tube of the 8' pvc pipe into the ground about 3-4 feet (it typically would slide right in) tie one end of the mesh (I'd tie it tall instead of wide) then where ever the end of it was I'd stick another pvc pipe and tie wire it to the mesh. I'd keep zig zagging the mesh and pvc pipe through out the area I needed the trellis.