posted 11 years ago
A couple of years ago I read a fascinating article about a piece of big road construction.  The article pontificated that if the money for this one piece of construction was re-routed to bus stuff, then it would triple the number of busses for the seattle area and lower the traffic impact so much that it should nearly eliminate the need for big road construction for the whole area, including the proposed project.

I suspect that the math on this is pretty spot on.

I try to take the bus.  These are my last days in seattle before i move to montana.  Today I took the bus.  I paid $4.  If I took my car, it would have been about  20 minutes each way.  As is, I spent about an hour and 15 minutes getting there and about the same getting back.  There were no transfers - just one bus.  On the way over, I spent 15 minutes waiting for the bus which dropped me off 15 minutes early for my appointment.  On the way back, I waited a half an hour for the bus.

I have lots of stories of the bus frustrating me as I try to be a good citizen.

I've done the math a few times about not having a car and just using busses and sometimes renting a car.

I think that in seattle, the busses are packed, they are too expensive and they don't run often enough.  It does seem that busses are really smart.  It just seems poorly implemented in seattle.

I think the author of that article was probably right.  In fact, taking it a step further, I wonder if the money from all of those big projects was shifted to busses, we might have 10 times more busses for one tenth the price.  Maybe an annual bus pass would be $100.  And my total wait time for a bus today would have been 2 minutes to get on, 2 minutes for my appointment, and 2 minutes to come back.  And maybe the busses would have gone faster because of less traffic and making fewer stops due to optimized routing (since there are 10 times more busses).  Maybe traffic lights can be influenced to favor an oncoming bus.

The bus can be really smart.

Joel Hollingsworth
pollinator
Posts: 2103
Location: Oakland, CA
9
posted 11 years ago
I've heard from a lot of travellers who've visited places with operations partway between a bus and a taxi: still multiple travelers, but maybe a consensus-driven route, and much more independence for the drivers.

Mexico's busses seem owner-operated, they're decorated to the nines.

Israel has micro-busses that are often hired by a group for their exclusive use, but IIRC will also pick up and drop off individuals at other times.

I expect more of that sort of thing will develop here, as our economy um...progresses.

it sure makes sense that in order for mass transit to work it has to make money, that way someone has an incentive to make it efficient and desirable to people and so that the people who are using it are funding it. I suspect that the people who will drive a car no matter what would much rather put their tax dollars into roads then busses and it becomes difficult to get funding.

I have never lived somewhere that taking the bus made any sense. I use to take it occasionally when I was a kid to get somewhere a ways across town, but it wasn't long before I got a car at that point. gee.....I loved that car

living without the independence of a car would be frightening to me. and....I am too spontaneous.....

posted 11 years ago
I can't find a link for it right now.  I was hoping wikipedia had something.

But busses were privatized in the 50's (I think) and then the auto manufacturers bought the bus lines and instantly scrapped them.  Suddenly, folks had no way to get to work without buying a car.

posted 11 years ago
As I was inching through traffic today and watching the folks in the carpool lane going so much faster, my mind wandered onto this topic again.

1)  It seems reasonable to have a gas tax that channels funds to the bus system.  Apparently, in washington state, that is illegal.

2) With the number of people packed onto the bus, it seems silly that it should cost so much.  50 people packed on a bus trip that takes 45 minutes.  Collecting $2 per person is $100 for not even an hour.

3)  Building more roads and parking lots and cars and giving more money to insurance companies and petroleum companies ....  I can imagine lots of lobbyists in this space.  But for more busses - not so many lobbyists:  bus manufacturers maybe?

4)  while in traffic, I imagined all of the people in the cars being in busses instead.  Then, every 50 cars or so would be replaced with 1 bus.  The road seemed a lot less crowded then.  Even if half the people were in busses, the road would be less crowded.

5)  If you could go anywhere at any time and it took five minutes or less of walking and the whole trip took 15% longer, but your cost was $50 per month instead of $700 per month ....  I would think a lot of people would rather keep the extra $650 per month.  Plus, with fewer cars on the road, maybe there would be less traffic and then the bus would actually be faster than a current commute.

Just some thoughts during my last few days in the big city.

Leah Sattler
Posts: 2603
51
posted 11 years ago
I bet you're glad your leaving the big city! I am at the point now where I have some anxiety when I have to drive in a city with any amount of traffic.

I am just not used to it.

how much do you think this has to do with our cultural outlook? in some cities across the world it is perfectly normal and acceptable to use public transportation. I think in the US there is a bit of a stigma. owning a car is still a sign of status. second hand info from an aquaintance who used to go to france regularly tells me that there are much fewer people with cars and they keep those cars they do have for a looooong time. not like our typical culture that considers it acceptable to trade in every few years.

posted 11 years ago
I think what is more important is to have our government make choices that foster cars over public transportation or vice-versa.  And when a big city clearly favors cars, then I have to wonder about the influence of lobbyists.

Posts: 0
3
posted 11 years ago
The wife and I went to a gathering 2 weeks ago. The Indian council of Many nations club we belong to had the lodges (tipi's) set up and others had the old farm implements in operation (steam tractors etc.) a kind of rondevu.

I was talking to an elder and he told me after WWII General Motors paid the owners of the Horse-Drawn trolleys $1000. for their trolley and gave them a Buss in return.
To boost the economy and get the nation more addicted to diesel and gasoline.

Putting the Horse out to pasture....

National, which had been in operation since 1920, was organized into a holding company, and General Motors, Firestone Tire, Standard Oil of California, Phillips Petroleum, Mack, and the Federal Engineering Corporation made investments in the City Lines companies in return for exclusive supply contracts.[1] Between 1936 and 1950, National City Lines bought out more than 100 electric surface-traction systems in 45 cities,[2] including Detroit, New York City, Oakland, Philadelphia, Phoenix, St. Louis, Salt Lake City, Tulsa, Baltimore, Minneapolis, and Los Angeles, and replaced them with GM buses. American City Lines merged with National in 1946.[1] 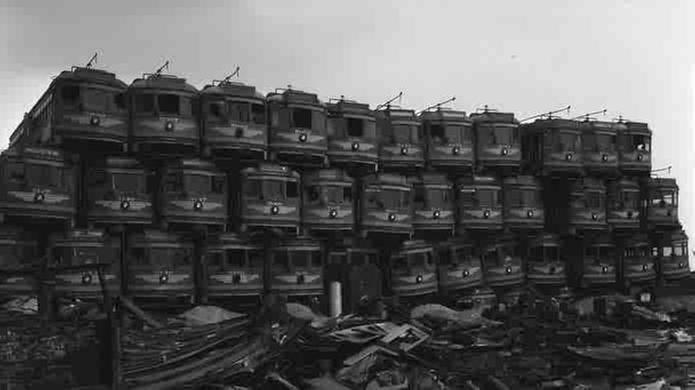 Joel Hollingsworth
pollinator
Posts: 2103
Location: Oakland, CA
9
posted 11 years ago
A big part of this all was preparing to fight the previous war.

London's Underground had been a tremendous asset during the Blitz, but in general rail systems had proven more vulnerable to bombing than systems focused on automobiles: A jeep or military truck can drive around a crater, when a rail-based troop transport or artillery piece would be out of luck.

Ironically, a lot of the railroads bombed at that time had been built partly to respond to how useful locomotives had proven themselves in previous wars...

its hard to compete with those big auto makers and oil co., no doubt they have had a huge influence.