Dan Cruickshank
Posts: 59
Location: Virginia
posted 7 years ago
We seem to have a problem with mice and our chickens. The mice like to stay in the shed where we keep the chicken feed and the straw for the chicken coop. It seems like a perfect environment for them.

My problem is that I don't want them there.

We also have a dog house converted into a turkey coop for baby turkeys, together with an outdoor run. Every time we move that converted doghouse, however, we find a fresh family of mice underneath.

I don't really want them there either, although I suppose if I knew how long a mouse brood cycle was, I might know to move the coop whenever the baby mice were available--they do make good chicken treats.

We've found a black snake on the property - I figure that's a good start.

We've found that if you keep a metal trash can with a handful of feed in the bottom, that it will then act as a live mouse trap. The chickens relish the mice as treats, although getting the mouse to the chickens without letting him get away has been ... only somewhat successful.

Anybody have any other good ideas?

posted 7 years ago
I keep my feed in a metal trash can with a tight lid. I don't know of a good way to keep them out of the hay/straw except to suggest getting a cat. You could build lots of habitats for snakes. I like to build holes in my stone walls for them to hide in. Snakes also love wood piles. Every winter I find fifty or so snake skins among the cord wood. I thought that a regular mouse trap inside a long piece of PVC pipe would be a good way to kill mice and keep the chickens safe. Mice fit down the pipe but the chicken can't. Set the trap and slide it half way down a four foot piece of pipe. Just make sure the trap will work well in the small space.

Posts: 946
Location: 6200' westen slope of colorado, zone 6
68
posted 7 years ago
an old chest freezer makes a great rodent-proof storage container. around here, they are free for the taking because once broken, people dont want to pay the disposal fee at the dump. I have several, one just out in the field unprotected. they are waterproof, insect proof, and rodent proof. love em.

Dan Cruickshank
Posts: 59
Location: Virginia
posted 7 years ago
Actually, it's not that the mice are getting into the storage container, it's more that we can't seem to keep the floor clean. The feed is kept in a metal garbage can with a tight lid. They're not getting into that. They're getting into the scraps that spill onto the floor every time we scoop some up to put into a transfer container.

I like the idea of the PVC pipe with a trap in it. I think I might have just that length lying around to try. It'd also keep the cat out of it, so I wouldn't have to worry about killing or injuring a cat while trying to get a mouse.

matt dee
Posts: 37
posted 7 years ago
Its a losing game if you want to get rid of mice. And hey, at least you don't have rats. Get a cat or two. They will kill a few mice and the survivors will not be able to roam freely. To keep the old dog house ( waste not want not

) clear, put a cement block under each corner, or whatevers handy. Once it is up off the ground, there will be less shelter and protection, so Mr and Mrs Mouse will have to go else where:)
Adam Klaus
author

Posts: 946
Location: 6200' westen slope of colorado, zone 6
68
posted 7 years ago
Then the advice is simple- get a cat. Cats belong on farms, because it sure beats the alternative, which is lots of rodents.

My cat has eaten nothing but mice since May. And I thought we didnt really have many mice on the farm. There are just that many hiding in haystacks and reproducing in corners of barns and such.

Why no cat? They really are essential, IMHO.

Dan Cruickshank
Posts: 59
Location: Virginia
posted 7 years ago
Why no cat? Well, we have a cat. It just hasn't done any mousing for us. We've locked him in the shed, he works his way through the shed, sits and watches the mice for a while, and then asks to come back out.

We even caught a mouse, and put him in a 4'x2'x2' cattle feeder with wood chips in the bottom. (The chickens were sleeping there, in the house, at night--to recover from injuries from the rooster. We put the mouse in after letting the chickens out.) The sides were tall enough that the mouse couldn't get out. We put our cat, named Tiger, in there with the mouse and watched for over a half an hour as they played "cat and mouse." Eventually, the mouse learned that he could run towards Tiger anytime Tiger pounced. Thus, Tiger would pounce and land with his hind quarters on the mouse. He'd look left, right, confused, not finding the mouse. Finally, Tiger would pick himself up and the mouse would run out from under him. After a half an hour, one of the hens wanted to come back into the house to lay an egg. She knocked at the door, I let her in. She pecked at Tiger, and Tiger was out of there in a flash. She pecked at the mouse: once, twice, and then the mouse didn't move again.

We did this again later, with another mouse. After close to an hour, Tiger came back to me meyowling. When I went to check on the mouse, it wasn't there anymore. My only guess is that the mouse jumped on Tiger, and then jumped from Tiger to get out of the feeder.

Bottom line: we have a cat. It's been fun and amusing to watch him try to do his cat thing with mice, but so far nothing significant has happened, save for lots of laughter on our part at watching him.

P.S. He seems to do a much better job jumping on and pouncing at the laser pointer ....

Posts: 946
Location: 6200' westen slope of colorado, zone 6
68
posted 7 years ago
So it sounds like you still need a cat. Seems like you have a housecat. Totally different creature.

My cat is named Tiger also, but he is a Cat. Not really a pet, more of a farm co-habitant. Cool animal, deadly killer.

Talk to your local animal shelter people. Get a young cat, not a kitten, that seems a bit rough. Never let him/her in the house. Feed them every few days, not every day. Some say that females are better hunters than males, but I have not seen that.

matt dee
Posts: 37
posted 7 years ago
Backing what Adam said, females are better hunters, more often than not.
If tiger is an outside cat stop feeding him ( if you do )
He just seems lazy.
When hunger sets in he will go out and find his own food.
Valerie Acquard
Posts: 22
Location: North Woods MN
1
posted 7 years ago
My first solution. Buckeye chickens, who are known to be good mousers. I've seen them go nuts after a chipmunk already and they are only 10 weeks.

And my second solution. Don't worry about them. Why? If there is a large mouse population keeping the foxes, skunks, raccoons, hawks and other predators happy they will be less temped to try for the chickens.

But the metal trash cans work, I love the old chest freezer idea. Cats are great my landlord has several old ones that run around the property. But my dogs also have killed and brought me mice. I figure if my animals can catch them easily then so can the predators, and then everyone is happy.
James Freyr
steward

posted 6 months ago
I took this picture this morning while changing the bedding in the chicken coop and a field mouse had made a home in there. I have found chickens to be ready, willing and able to catch and eat small critters such as frogs and as pictured here, mice.
chicken-with-mouse.jpeg 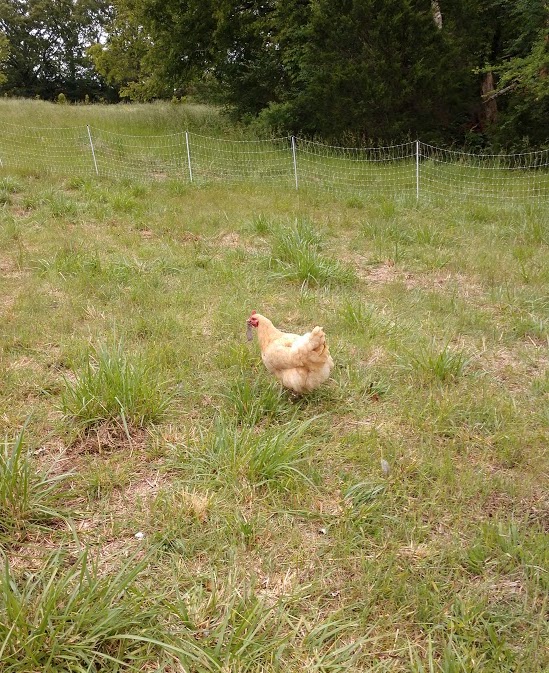 James Freyr wrote:I took this picture this morning while changing the bedding in the chicken coop and a field mouse had made a home in there. I have found chickens to be ready, willing and able to catch and eat small critters such as frogs and as pictured here, mice.

posted 6 months ago
I have a vole problem in my field and am hoping that my chickens will help. In the past I've had some birds that were decent mousers