Terri Matthews
Posts: 529
Location: Eastern Kansas
24
posted 7 years ago
Simply take a stalk of grain by the straw and pull it through the tines of a fork. The grain will squirt out so a bucket would be best. This is about as tedious as snapping beans, but no worse than that.

If the fork has a very narrow gap between the tines the straw is more likely to break: the ideal gap is just smaller than each kernel of grain.

I can envision a wide metal comb, well secured down, so that grain can be threshed by drawing handfuls of grain stalks across it but I have never seen suck a thing! But, one stalk at a time will give me grain for cracked wheat bread!
R Scott
pollinator
Posts: 3719
Location: Kansas Zone 6a
153
posted 7 years ago
There is such a thing, or you can build your own using nails into a board (drill the holes so you don't split the wood). They were used for preparing flax.

Terri Matthews
Posts: 529
Location: Eastern Kansas
24
posted 7 years ago
I thought of drilling holes in a board, but then the nails would have to be less than 1/4 inch apart and I do not think that a strip of wood that narrow would stand the pressure.
R Scott
pollinator
Posts: 3719
Location: Kansas Zone 6a
153
posted 7 years ago
flax

Example in metal. To do it from wood would take careful grain selection but could be done. We have had tools built similarly that lasted quite a while, some abused even.

I know I have seen new tools that would work as-is, but can't for the life of me remember what they were supposed to be for.

Scroll down page - it appears they may have offset the nails in some of these tools to help create smaller openings between them.
I've never worked flax, but have always wanted to try. Wool has been my experience.
Best of luck with your endeavor.
John Polk
steward

I can envision a wide metal comb, well secured down, so that grain can be threshed by drawing handfuls of grain stalks across it but I have never seen suck a thing!

Our family used to raise show dogs (afghans), and we had such combs. They come in various degrees from coarse to fine.
Go to your big box pet store and see what you can come up with. See sample below:
Dog grooming comb

I guess you could get various gauges for different grains. Great idea, thanks for posting it.

Something I made for the job, from an old washing machine. I've also seen devices made from cable reels with nails in them.

I find it helps to keep the sheaves neat, with all the grain heads as close together as possible.

Some people get horses or donkeys to trample the grain. I would suggest that if you try this for human consumption try very hard to keep grit and dirt out of the grain: A clean threshing floor, clean the hooves of the animals before hand. Winnowing and sieving gets rid of chaff but it is harder to remove grit

posted 2 years ago
We have super tiny amounts of grain this year.    Just the sepp holzer grain.   We might end up with two or three pounds.

At first, me and jocelyn and fred set up a laptop to watch a movie about a guy named thor losing his favorite hammer, and each of us had a bowl of seed heads on our laps.  We then removed the seed heads by hand.  At the end of the movie we had not made much progress.

I thought about the bucket with the bit of chain.   I have a couple of concerns about that:

- chain rubbing on plastic bucket could lead to plastic in food

- chain rubbing on metal bucket could lead to explody things

And I thought about usinng grinders and shredders - but I don't want to break open the seed.

The mission is to break up the seed head - and then the grains fall out.

So I put on a pair of gloves, grabbed big handfuls of seed heads and smashed.  Smashy, smashy, smash.  I smashed in a lot of different ways.  But after about ten minutes of work, I had stuff that was ready for winnowing.   The picture below shows what i started with on the right and what i ended with on the left.

This went about 15 or 20 times faster than the previous technique.  But I made a mess (inside).

I think I might be able to get the same results in about four minutes, without the mess, if I put it all inside of pillowcase with the end capped off.   I could then start with 30 seconds of stepping on the grain heads.   And then proceed to smashy-smashy inside the pillowcase - but I can do it more vigorously since i won't have grains spilling out.

posted 2 years ago
and then i winnowed the grain.   i think this is a really simple and really speedy process!
winnowed-grain.jpg

posted 2 years ago
The pillowcase method has been the easiest for me as well.  An hour and a half of leisurely harvesting (with scissors), threshing, and winnowing got me about five pounds of rye a few years ago.  I just put the seed heads straight into a pillowcase, whacked it against a rock wall for a bit, dumped (incidental winnowing happens at this point) into a bin, then refilled the pillowcase.  You don't want too much in the pillowcase at once.  Then I waited for a breezy day and winnowed.

Squeezing the seeds out by hand is very time consuming, but quite relaxing.  My husband and I spent a couple hours sitting in the sun silently picking rye after a particularly taxing couple of days this summer, and it was lovely.

I found the same for dry beans.  Shuffling on a tarp was more time consuming and not as effective.
Tj Jefferson
pollinator
Posts: 1341
Location: Virginia USDA 7a/b
321
3
I like...

props as they say in Clueless. This was where my efforts stalled.

Did the guy get his hammer back?

posted 2 years ago
I tried the pillowcase technique last night.   It worked REALLY well.  It went even faster than I expected.

I put a full bucket of seed heads into the pillow case.  Then I folded the open end a few times and put on about eight clothespins.

Wearing leather gloves I smooshed the contents for about a minute.  Then I put the pillowcase on the floor and with regular shoes (not boots) I smooshed it around for another minute.

I thought I would look inside to see how things were going and ....   it looked like it was all done.   The seed heads I could see appeared to be empty.   I found a couple of seed heads that still had one or two seeds.

When I got to the winnowing stage, I manually tossed out a few empty seed heads that wanted to keep hanging out with the seeds.  And if any seed heads looked like they might have some seeds, I put those back into the pillowcase for next time.

I've never seen plastic bits, and since I screen the grain before winnowing, any bits would fall through along with the undersized seeds.

The potential explody thing is something I hadn't considered. It's an interesting thought. I'm going to be threshing shortly, so I will see if I can actually ignite the dust in my small pail using a BBQ starter I have. They make a great spark. I will report the results and my observations (assuming I am not consumed in a resulting fireball).
paul wheaton
steward

Whenever I got done bushogging the margins of my fields, i noticed that inside the bucket of my tractor there would be a few pounds of seed from where the cuttinging edge of the bucket would rub along the sward and inevitably flip up the seed from the stalk.

Interesting, because it was collecting a few pounds of seeds in a VERY ineffecient system. What if I improved upon the collection method? I could get some free grass seed for doing a task I normally do anyway.

So I set about to design a better system. So I took a pine boards 5 feet wide, the width of my tractor bucket, and bolted it to the top of my bucket. Then I bought a few pounds of 2 inch finish nails and started nailing the nails just as close as I could to the next one as I went down the board. This gave me a very fine comb that did an even better job of stripping the grass seed from the stalk giving me free seed. When I want to "thresh" I just lower my bucket into the sward primarily capturing timothy and orchard grass. But if I want to stop "threshing", I just lift the bucket so that it is out of the sward.

WARNING: This does NOT produce 100% pure seed, inevitably weed seeds get into the mix, but it is free grass seed!

Could this be a cheap mechanized way for a micro or small farm to "thresh" a small field of grain? It would not be ideal as there would not be a full, clean thresh percentage, but maybe a person could afford a little loss if it was easy to just drive around a field with a tractor a few times?

posted 2 years ago
Kind of off topic, but not completely...

Last year I needed a way to sow winter rye/timothy/clover on a 10 acre field. How the heck to do that without a drill? And 10 acres is too big to do by hand, and too small to get a custom farmer to come in and drill it.

So, I came up with this design. I powered my drill with a portable generator, not seen in the photo. Then a piece of threaded rod, some nuts, a 5 gallon bucket lid, then some angle iron bolted to the lid. I'll be darned if it did not work well. 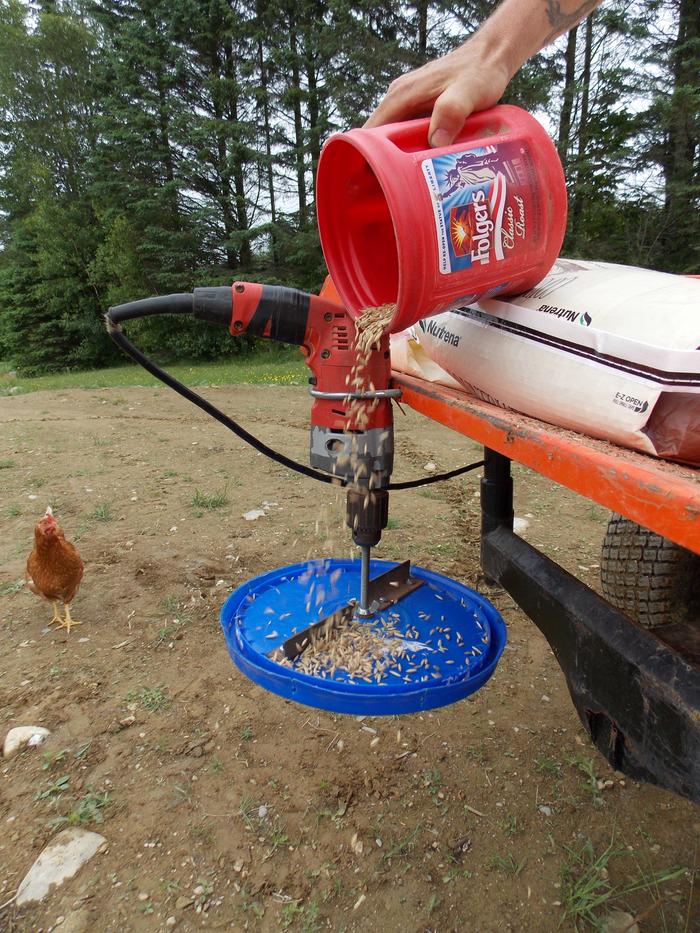 I harvested bean seed today. More than can easily be stuffed into a pillowcase. So I threw them onto a canvas, then wrapped the canvas up like a burrito, and beat them with a stick. Followed by sieving/winnowing.