posted 10 years ago
I considered putting this in the alternative energy forum because it's such a cool idea.

Much better than the Segway IMHO. (Plus, after that Weeds episode about the nude Segway rider, I just don't think I can ever think of them in the same way....)

posted 10 years ago
Wow, how neat. . . . I'm glad my children are in bed or they would be trying to talk me into one.

I wonder how that seat feels after some time though, looks small, hard and plastic

posted 10 years ago
Good point, Jami, about the seat. Other issues I read were that the demonstrators were tooling around in traffic without helmets. (!)

(Which then led to jokes about Europeans having more health care and less lawyers than here, so if they fell without a helmet, it wouldn't be so bad!

Posts: 1601
Location: Cascades of Oregon
92
posted 10 years ago
Looks pretty cool but after many miles touring and bicycle commuting I worry about leading face first.
Way to many inconsiderate cars have pulled in front of me and the impacts have resulted in minimal injury. I did have the wheel in front of me and the handle bars.
Looks as if knees and chin would be my emergency bumper on this thing.
Clever idea still.

posted 10 years ago
Yes, it is expensive, Paul, but as you like to point out per supply and demand economics, with more demand, the price could go down significantly.

Interesting point about the rider orientation, Robert. In the video they touted it as more "natural" to sit that way than the lean-forward bicycle style. Though I do wonder if the fold-able design and aesthetics led how the rider would sit, and not the other way around...

I think the fold-able, portable aspect is HUGE. And I think the aesthetics are significant, too.

Whether it's Segways, or Yike Bikes, or electric cars, or even things I personally wouldn't spend the money on; I'm just happy to seek folks innovating and providing alternatives.

Looks as if knees and chin would be my emergency bumper on this thing.

Yeah, I agree.  I have a tandem bicycle a friend made for me, and the person in back sits in the same position as the Yike bike, and I feel totally unstable on it.  If a bump pops you up in the air, your spine is so vertical it's easy to feel like you're going to fall off.  Luckily, it's my tandem and therefore I'm the captain!

There's a stability about being bent over (you can be quite upright on a regular bike, that all depends on your frame geometry and handlebar style), or at least with your hands in front of you, that makes bicycles feel sturdy.  The triangle of your spine and arms is very strong.

There's no triangulation of the body with this contraption.  I imagine not being able to stop fast enough for something and launching off the front of it -- fully frontally into whatever you were trying to avoid.

Could you go down or up steep hills on this thing?  The video is entirely on flat, recently paved streets (compared to the streets of philadelphia, christchurch's roadways look immaculate).  I think it would be challenging to keep your spine upright, even if the motor's doing the work.

Obnoxious opinion time:  I don't see electric powered anything as the answer to our problems.  People need to use calories to get to get around in cities.  There's a HUGE amount of infrastructure that needs to be in place to simply "plug it in when you get there" - I feel like electric designs take the existence of "the grid" for granted, frequently, and don't answer the question of what created that electricity.  If people were required to expend human energy to get around, I have a feeling the obesity problem in western society would just melt away.  But again -- all that's just my obnoxious opinion!
paul wheaton
steward

posted 10 years ago
I think that's a damn good point.

posted 10 years ago
I have this fascination with bicycle transportation, even though I don't bicycle myself.

I had (or may still?) consider helping my son set up a little bicycle delivery business, so I've been looking at cargo bikes/trikes and electric bikes (we have some serious hills in our little town!).

Then this cargo bike article from Sightline came through this week and it's a dang fun article.

Take a look at the video for the picnic table bike--that one's a hoot! The waffle bike I didn't think was quite as funny as the author did; to each his own.

So I tell my daughter about trying to help her little bro get a bike messenger/delivery business going, and she says, "you know the bike messengers are druggies, right?"

But this article makes it all look so wholesome and cool! Even the beer bike!!

Posts: 0
3
posted 10 years ago
Our neighbor builds 4 wheel bikes out of old steel bed frames he bolts them together.
would anyone be interested in seeing photos?? if so I'll take a few & share.

posted 10 years ago
I think those would be very cool to see!

Dianne Keast wrote:
Our neighbor builds 4 wheel bikes out of old steel bed frames he bolts them together.
would anyone be interested in seeing photos?? if so I'll take a few & share.

sounds like your neighbor out to come to Woodland for the bed races next year. 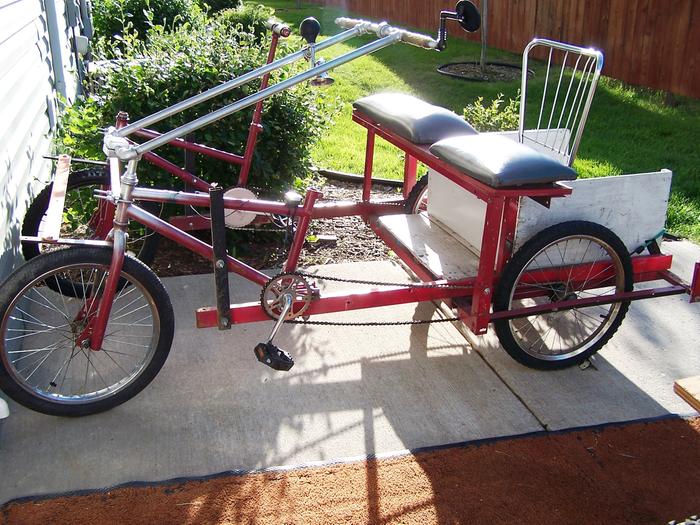 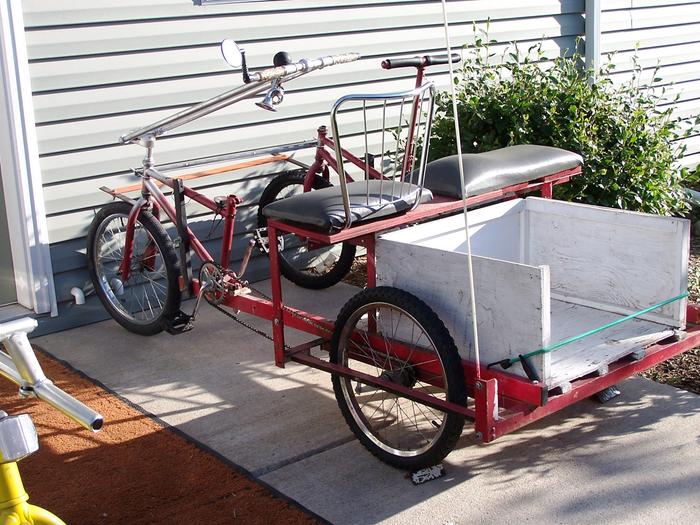 posted 6 years ago
As an alternative, how about a conversion. Kind of a win-win as you can keep an old bike from going to the dump.

Through a kickstarter (Thank Paul) I found Micah Toll's

Chip Haynes
Author
Posts: 53
Location: Clearwater, Florida
5
posted 6 years ago
Say, didn't the Monkees ride those at the start of their show each week?

All I can say is, $4500 will buy you a very nice REAL bicycle, and you'll get more good out of it for a lot longer.

Touch not the cat but a glove.