I saw someone here mentioned that they have a coop that the hens could fly in and out of. This coop was more difficult for predators to enter. I would like more information on this type of coop, but when I Google "Fly-in coop" I only get hits regarding flies in the coop. Do any of you have experience with this type of coop?

What size does the door need to be?

How high off the ground should the door be?

Will the birds need a perch on the inside or outside of the door to make it inside?

Can all chickens use a coop like this? What is the training process?

Yes, that was the post where it was mentioned, but I am looking for more specific information on how it is actually accomplished. I am thinking about getting chickens this year, but we have both foxes and coyotes in my area. The area that the chickens would be in is multiple strands of high voltage electric fence, and the predators no longer visit that part of the property, but once tasty birds arrive, I want another line of defense. A fly-in coop seems like a good alternative, but it looks like what Geoff has set up could be easily accessed by a fox.

Thanks!
Peter Ellis
Posts: 1444
Location: Fennville MI
43
posted 6 years ago
I am also intrigued by the "fly-in coop" idea. Questions abound, as the OP suggests

How to "train" the chickens to use the fly-in access way; how big does it need to be; is it at floor level inside, or just a hole in the wall and they fly through and down to the floor; Any special arrangement for them coming back out ?

It strikes me as potentially more predator resistant than a conventional ramp arrangement, but I wonder if that is accurate.

At the very least, it is one more option to consider.
Zach Muller
gardener

posted 6 years ago
My coop arrangement is 'fly in' but it is only 3.5 feet off the ground. I have a metal cage sitting on top of two piers with the floor of the cage being a grid of wooden perches. The birds all get into the coop by going under and flying up through the perches, and once they get inside there are upper perches that they use to sleep. The hole they go through is about 10x10. I worried that the rooster would have problems getting through but he manages.This design is not particularly for predators, but I have used it a while with no night predator attacks. The reason I came to this design is actually so when they poop at night it will fall all the way to the wood chips, and they stir up the wood chips the next day so there is very little smell or maintenance.

If I customized this design for predator protection I would use metal poles as piers so coons couldn't climb it as easily, and make sure the entrance was well away from them. I would also raise it to the maximum height for my weakest flier to still get in.
Training them will also depend on the bird, it helps if they are already attached to the coop when you mount it up. It would also help to have one that is smarter and will set the example for the slower ones. Mine just want to get off the ground when evening hits so they naturally went right in the first day it was installed.
Another way I could see training them would be initially setting up a ramp so they get an idea of where the entrance is, then remove it later.
Karen Walk
Posts: 122
Location: VT, USA Zone 4/5
3
posted 6 years ago
Thanks for the info Zach!
S Haze
Posts: 232
Location: Southern Minnesota, USA, zone 4/5
12
I like...

posted 5 years ago
I really like this topic! Ideas like these can really help out those of us who keep chickens and have problems with predators. I'd love to see some pictures if anyone has them.

In my situation raccoons are the main predator of chickens and unfortunately they seem to work about twice as hard for ducks (they must be even tastier than chickens!). To keep the flock safe even if the coop gets closed late or not at all I'm envisioning a mobile coop with an "electric skirt" around it. The chickens could fly onto a platform or perch that's taller than chicken and higher than a raccoon can jump. If the raccoon tries to climb up it will receive an unpleasant shock. I just need to know how high a raccoon can jump.

Last week while moving some things with a tractor I accidentally killed one of our senior citizen chickens, didn't see it behind the thing I was pushing. So as an experiment I placed it's carcass on a small metal gate on top of plastic bucket. The gate was wired up to the electric fence. Nothing stole the bait so unless the raccoons have all cleared out it worked!

Milo Stuart
Posts: 24
Location: Mendocino Coast, CA
2
posted 5 years ago
Right on ya'll! Here is an our fly-in coop update. Year two and no predator issues.. except for a mama black bear and her hungry cubs.. but that was wilderness tax and we've got a dogger now.. Anyway.. here it is.

The hole is about 5 feet off the ground and the ramp is about 4 feet away.. Their landing is just a thin piece of plywood (the bottom of the hole is their landing)... A predator would have to jump through blind for a meal.. Not likely.

We train the chickens by setting the ramp right up to the hole for the first week. Take the ramp down before nightfall so they have to fly out in the mornin.

A bit of feed on the ramp help to coax them up. For the first few night about half the chickens probably wont figure it out... Just help them in. But they'll all get it eventually. Chicken see chicken do.

The design takes advantage of the chickens ability to fly.. (we clip some flight feathers on one of their wings and they make due just fine). We have just about every chicken predator here.. racoons, skunks, foxes, bobcats, lions and bears but none of them can fly! Except the red tailed hawks and eagles ..but.. they're pretty awesome quite frankly and probably deserve a chicken every once in a while. (we've only lost one chook to raptors)

Best part is zero anxiety about closing them in at night and letting them out in the morn.. No no need. The chickens can fly in and out at their leisure to lay and roost. Wheww! 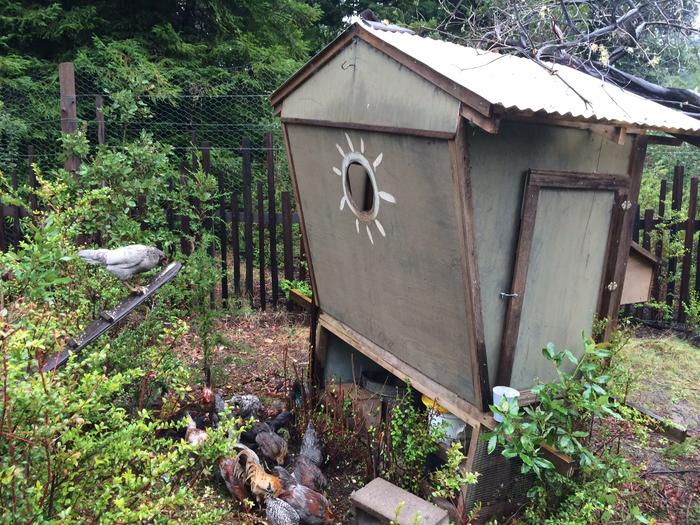 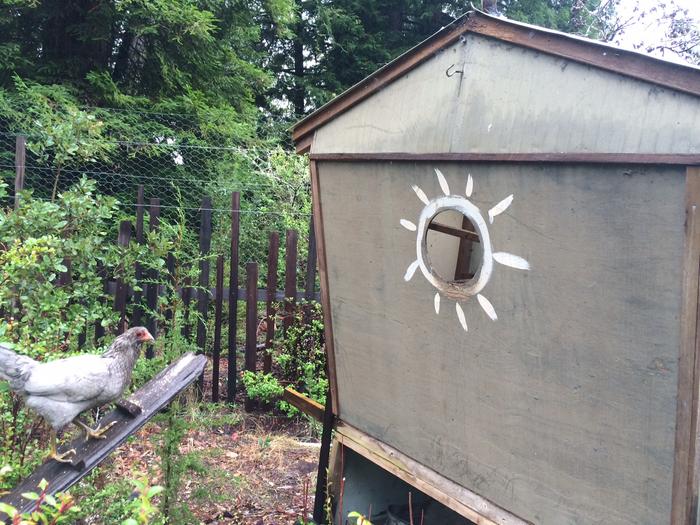 Not all those who wander are lost.. -Tolkien

mark andrews
Posts: 59
posted 5 years ago
This is an amazing idea! Why isn't everyone doing it?
I can't find anywhere else on the internet that is talking about it.
Chris Knipstein
Posts: 45
Location: Fort Wayne, Indiana
8
posted 5 years ago
That is a really good idea. Do you have any pictures of the inside set up? Is there a perch somewhere below the hole on the inside to help them out, or do they just have to jump / fly from the floor to the hole?
Milo Stuart
Posts: 24
Location: Mendocino Coast, CA
2
posted 5 years ago
Yeah! Here are some shots of the inside.. Well they land/perch in the hole before hopping up to roost.. Pretty entertaining to watch them all lined up on the ramp at dusk...

- The face wall of the coop (with the hole) probably doesn't need to be slanted out.. We just did that as an extra defense against scramblers.. We'll probably make it square next time round so that poop doesn't build up on the wall.. hmm

- Smaller size. It's on wheels but its pretty bulky to move around.. Maybe a removable stand? So that two people could just carry the top portion to a new spot.

- The floor of the coup could be a small gauge metal grate.. It could be covered with cardboard and straw/sawdust in the winter..

- Build it so that you can bring a wheelbarrow up the door and rake out your poop covered carbon..

Not all those who wander are lost.. -Tolkien

posted 5 years ago
Now if only we could figure out a comparable method for the ducks and geese I'd be set! I wonder if there's a thread on that? My ducks have been like raccoon magnets at times when pressure is high although that was before the geese were with them. Time to put on the thinking cap since I'd really like a way to leave town for a 24-48 hour period without pestering my neighbors to watch after the flock.

posted 5 years ago
Very nice Milo! Glad it's working for your hens.

I saw some photos of dovecotes and it got me thinking more about the idea for chickens. I found an image of a dovecote style hen house. 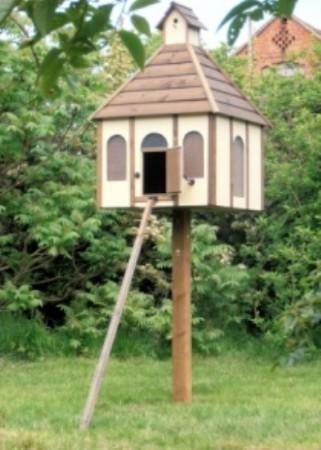 Looks like if someone wanted to mobilize this coop it could easily be mounted on a small wheeled platform or something. For non mobile coops I like the look of this. 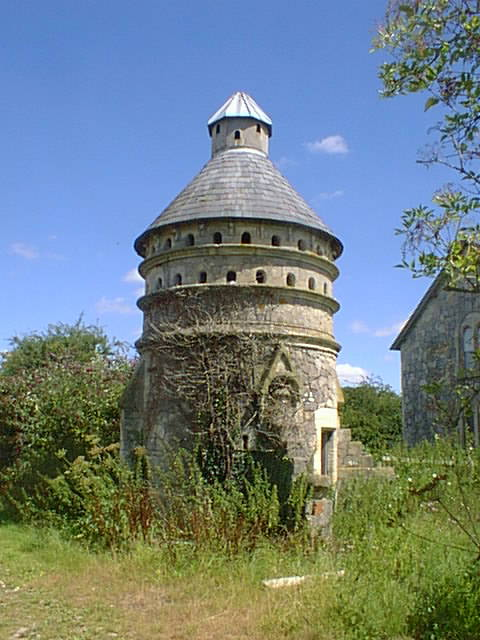 You could have no access on the ground level, chicken holes at chicken height, dove holes above that.


S haze, For the ducks have you considered a shelter that only can be accessed through the water? Or maybe one that is a floating island? 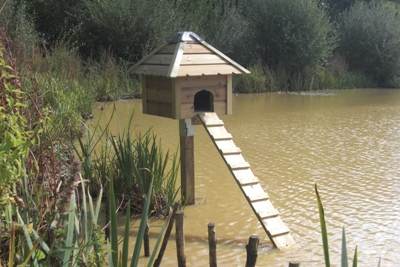 Milo Stuart wrote:Right on ya'll! Here is an our fly-in coop update.

Very nice! It solves a problem which I have and you don't: snow! It gets hard to open the door to my coop pretty quickly in Vermont due to snow/ice build up. I've been contemplating changing the door to be a foot off the ground.

I do think a metal grate bottom might work better. If the whole thing was skiddable, that'd be great too.

Henry Ikeme
Posts: 49
1
posted 5 years ago
This is a nice idea. Set the cope high and place a step-like ladder that can take the weight of chickens. The chickens will enter the cope by flying up the ladder.

Riz Martino
Posts: 1
posted 1 year ago
This post has been up a while- but it’s still the only place on the inter webs I can find people talking about a fly-in coop. Has anyone else had success (or failure) with it? I’m building my first coop and the idea of chickens managing their own ins and outs appeals to me greatly. Any info much appreciated!!