posted 5 years ago
This thread on honeylocust complements the main book discussion/review thread for Tree Crops. I have tried to reflect both the original authors intentions/enthusiasm for this crop but also update it with the current state of affairs.

J. Russell Smith was very enthusiastic about the use of honeylocust as a fodder crop for livestock. It is thought to be nitrogen fixing (more on this to follow), the pods contain a sweet pulp which is enjoyed by both people and animals, the seeds can be ground to make a high protein meal and the pods fall from the trees in late autumn to early winter nicely supplementing declining forage yields from pasture. Smith points out in the book the huge natural variation between individual plants in terms of size, vigour, thorniness, pod size and sugar content and determines that these honeylocust have huge potential to be improved for fodder potential given an adequate survey for good parent stock and a suitable breeding program over a number of years. For example natural variation in sugar content runs from 15% to over 30% (compared with maple sap which has 3% to 6%) and could likely be bred higher still. Likewise pods could be bred for greater proportions of pulp to seed/shell and there is some suggestion that the pods could be bred to have the seeds in a narrow margin so as to be easily removed with a single knife cut.

Smith's text generally is based on anecdotes collected from contemporary farmers concerning yields, as opposed to strict scientific analysis of yields so his quoted figures should be taken with a pinch of salt.


Regarding nitrogen fixation in leguminous trees, the conventional wisdom has been to divide the family into nodule-forming and non-nodulating species, and to assume that those species without nodules do not fix nitrogen.

This conventional wisdom has now been challenged by Jim Bryan in his 1995 doctoral dissertation for the Department of Forestry at Yale University. Bryan has found evidence that non-nodulating leguminous species apparently do form a symbiotic relation with soil bacteria (Bradyrhizobium spp. or Rhizobium spp.). This endosymbiosis is carried out directly in the roots of the trees rather than in nodules. Honeylocust (Gleditsia triacanthos L.) was the primary species used in Bryan's investigation.

Bryan emphasizes that his research strongly supports, but does not prove, the non-nodule nitrogen fixation. He is continuing his investigation with acetylene reduction of honeylocust seedlings grown under more exacting conditions (in sand and hydroponically), and is also observing other non-nodulating legumes with the SEM.

Interestingly, Bryan initiated his study from an agroforestry perspective. He began by cataloging members of Leguminosae that produce beans (pods) for human consumption. During this cataloging he found that a disproportionate share of the bean producers did not present nitrogen-fixing nodules. He then set out to develop a practical test to identify nitrogen fixing bean producers, and this led him to discover the non-nodule rhizobial symbiosis.

In the approximately 18,000 member Leguminosae family, Bryan found 277 species which produced beans for human consumption. Of the 132 species in this group presently tested, 30% did not present nitrogen fixing nodules, compared with only 11% for the family as a whole. Of the 277 bean producing species, only 9 are native to the temperate zone.
The Gleditsia genus evolved comparatively early within Leguminosae. The nitrogen fixing in honeylocust is in several aspects 'primitive' compared to that found in nodulating legumes. This suggests to Bryan a possible evolutionary continuum within Leguminosae from the non-nodulating species of the Caesalpiniodeae subfamily to the nodulating species.

The implications of Bryan's findings for honeylocust agroforestry are unclear. How much free nitrogen honeylocust will produce, and how much of that nitrogen will be available for grass production is unknown. Almost certainly there will be increased interest in honeylocust. Whether this interest will be justified on the basis of additional free nitrogen will require considerable research.

Development of Locust Varieties since Smith

Sadly the trend in recent years has been to breed away from productive fodder trees and towards ornamental shade trees. The characteristics of a good shade tree are essentially opposite that needed for fodder - specifically a shade tree needs to be "tidy" and not drop fruit and pods, they also tend to be thornless.

This development stalled in about the 1940s and now very very few places appear to still grow or produce these for sale, and most are already out of stock until next year. It appears that not all varieties were exported from the USA - Hershey and Calhoun appear to be unobtainable in Europe at present.

These improved Honeylocusts seem to be ideal permaculture crops - high yields of nutritious pods that livestock can self harvest in the field, or that can be collected, dried and stored. Nitrogen fixing. Shade is dappled so only minimally restricts pasture growth beneath.

Propagation
These appear to typically be grafted onto young seedling of wild honeylocusts, and there is certainly potential to top work existing honeylocusts in and around farm lands.

Further development of fodder varieties
The fact that the existence of these fodder varieties has essentially been forgotten means that development stalled for 60 year and there is plenty of scope for improvement even with fairly small scale breeding programs. Full sized trees take up lots of space, but your could conduct a series of experiments on a single standard tree by topworking the limbs.

In this way you could take years off successive breeding generations (trees take 6 to 8 years to fruit normally) and only need minimal space - on limb per planted seed.

Akiva Silver
Posts: 175
15
posted 5 years ago
Great topic, and yes, what a shame that so much focus has been on the sterility of honey locust. What are the pollination requirements of honey locust?, I have always assumed that the non fruiting trees in people's yards are males. Are they dioecious?

Funny, in the middle of my pasture are two massive mulberry tries -- easily 50-feet tall -- remnant of a one-time homestead that stood at the top of the hill and is no longer and left behind only the two trees. Well, under one of these large mulberry trees was this thorny looking stalk thing that I cut down to just above the soil surface but below mower blade. Then, we had our winter and this summer before we cut hay I looked down and saw 6-7 thorny stalks coming from the one I had cut. Well, after a bit of reading here and there, I have discovered it is a honey locust (I hope). And a second tree also sprouting about three feet from the first. I'm going to transplant the small one to the end of one of my swales and the larger bushy one (it's about 3 feet tall now) I will try to foster to a usable forage-producing tree. I was so stoked when I learned what it is and that I'll be able to add one more healthy thing to my goat forage as well as fixing N. I've attached a photo of it so the experts here can give me a positive ID to ensure it's not black locust. It has the large tri-thorns already. 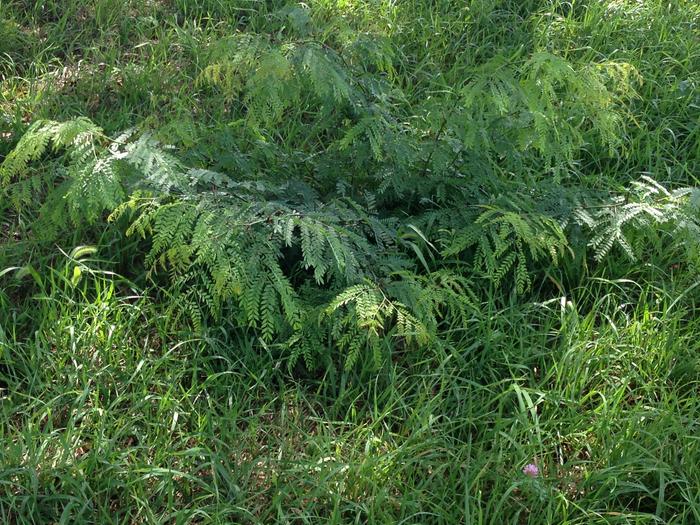 posted 5 years ago
Dan - honey locust definitely has a reputation for sprouting from damaged roots and for forming groves of genetically identical tree by root suckering. You probably have a reasonable nitrogen fixer there, but I'd be looking to top graft it with a THORNLESS and more productive variety if you can get your hands on the. The thorns from a honey locust will go through the sole of a boot, a tractor tire etc...

Great tree but a bit antisocial!

Kyrt Ryder
Posts: 947
Location: Graham, Washington [Zone 7b, 47.041 Latitude] 41inches average annual rainfall, cool summer drought
53
posted 3 years ago
Does anybody have a United States source for plants or scionwood for any of the Improved Cultivars?

Even contact information to someone willing to sell permission to climb and snip scionwood in the winter would be appreciated.

NOTE: when I say source I mean working source. Several websites claim they are 'out of stock but intend to get more'... and have said the exact same thing for up to five years.
Cj Sloane
pollinator
Posts: 3738
Location: Vermont, off grid for 24 years!
103
I like...

posted 3 years ago
I have spent the last 5 years keeping my eyes peeled for local honey locust trees that produce pods. I've found at least 10. They are all lovely trees, not terribly thorny, not invasive. I have a feeling that introducing them in damaged or brittle landscapes may bring out the thorny invasiveness - ie nature protecting damaged land the best she can.

I've sprouted some seeds from pods I've picked up. I get a 90% success rate on sprouting, it's the transplanting that's problematic. Still, a few have survived and are slowly growing. I've planted them far away from anyplace a tire may roll in the future.

I have a hard time reconciling the scary stories about HL with this lovely specimen found at the local elementary school.
IMG_1745.jpg 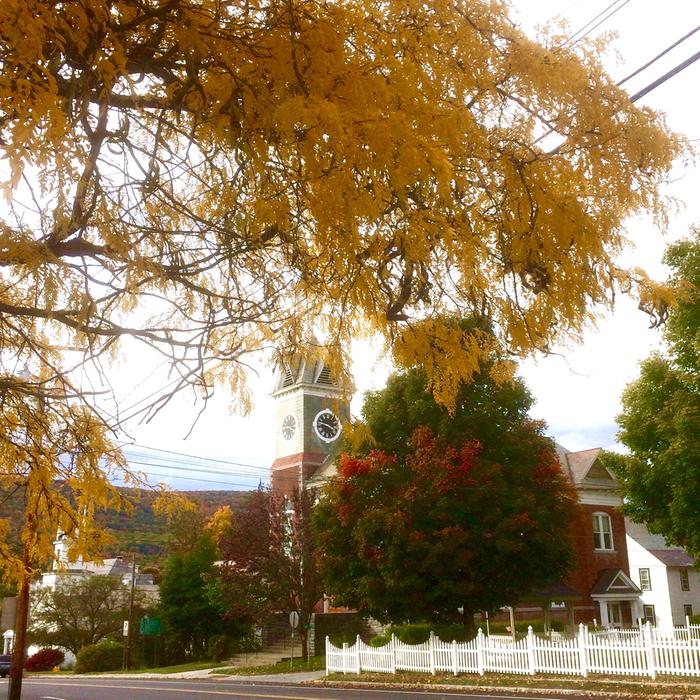 posted 3 years ago
My understanding is that young trees tend to be much thornier than mature trees. My guess is that the new growth tends to be more vulnerable to browsing, but on older trees it is out of reach so less in need of protection.

posted 3 years ago
So far in year 2 or 3, my young very slow growing HL are not particularly thorny.

My impression is that HL has been demonized due to aggressive spreading and the offspring of thornless trees having thorns. I haven't seen either of those to issues but I live in non-brittle Vermont.

Gilbert Fritz
pollinator
Posts: 1676
Location: Denver, CO
73
posted 2 years ago
I'd like to find seeds from the improved varieties, not scion wood or plants, to initiate another round of breeding. Does anyone know of sources? Surely some of the improved trees are growing somewhere, producing pods . . .
Cj Sloane
pollinator
Posts: 3738
Location: Vermont, off grid for 24 years!
103
I like...

Excellent find, and only 100 miles from me.  Thank you.

Mary Hysong
Posts: 57
5
posted 1 year ago
I'll be looking for seeds / seedlings of the improved thornless ones. In the meantime there is a thorned tree in my front yard at least 60 feet tall and 30 feet wide. Probably planted by my grand parents in the 40s. Those thorns are vicious, up 5 inches long and sharp as a scalpel. Local nurseries sell a thornless variety as a shade tree. I got some wood chips dropped a few years ago and apparently there were pods in there so for the past 2 years seedlings have popped up in garden beds, the majority are thornless. So when I clean off the beds I pot them up and will be planting them out as I have areas ready for them. I have discovered I need to wait until they are 12-18 inches tall to be sure they are thornless as sometimes the thorns come on a bit later.