posted 6 years ago
This has been bugging me for a while, so I thought I would finally throw my hat in the ring regarding the food pyramid evolution in the US. When the thing was first thought up, it wasn't anything like what we know now. Malnutrition from lack of eating enough. This is why the USDA was even created in the first place, let alone the food guides. 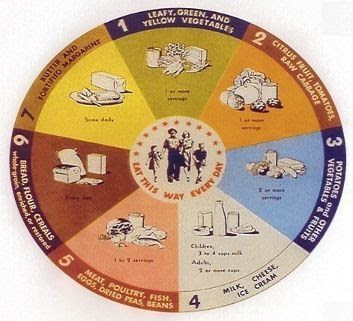 Back in the 1860s, all it took to make a healthier population was to encourage people to eat more. Food was mostly whole foods and eating more meant eating better. Knowing a bit about the time period, regular meals consisting of only bread weren't uncommon. The first true guide came out in 1916 and created the idea of food groups. I could go into details about the various evolutions thereafter, but honestly this little chart here offers anything I might say in this short post. 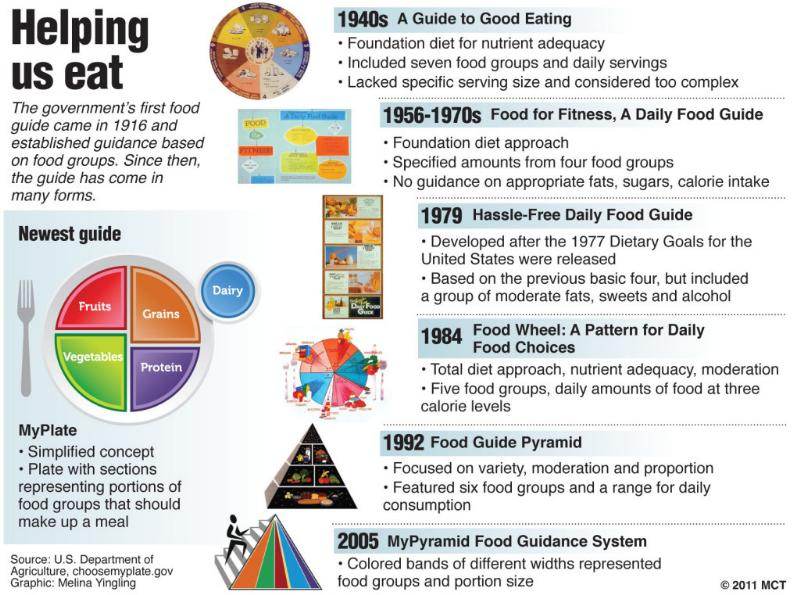 The problem I have has several facets. Firstly is that the shift in our food's nature led to a version of the food pyramid that I considered one of the best we ever offered. It was still influenced by the food lobbyists (more on that in a moment), but it offered a broader view of our diets. Even better, it had a very detailed website where you could chart out the sorts of activity you did daily from a list of what I believe was several hundred to a few thousand options (the site is gone so I can't go check the numbers any more) to see what sorts of things your body was going to be using more of. Data about your weight, bmi, gender, age, health history, etc all got fed into the system and then it would adjust the pyramid based on your unique needs.


Even better, it was more active in helping you find the right sorts of foods than any pyramid before or since. It would break down veggies into different sorts such as dark leafy greens for example. It wasn't just eat a number of veggies, it was “These are the sorts of veggies that will have the vitamins and minerals you most need”. It did what the Eat Right Guide (never released in the original form due to lobbying) was supposed to do somewhat better than the hybridized version that was to become our 'food pyramid'.

It wasn't perfect. They got rid of the stupid 'starches' category and changed to grains, implying whole grains by the term and then going so far as to actively say at least half should be whole grains. They still listed milk, but then clarified it should be 'calcium rich foods' which extends beyond just milk. The lobbyists wouldn't let them remove milk, make notations to avoid processed foods, or shift the ratio in favor of extra vegetables and less meat/dairy aspects in avoidance of fats... but they did find some creative ways to imply it anyway. 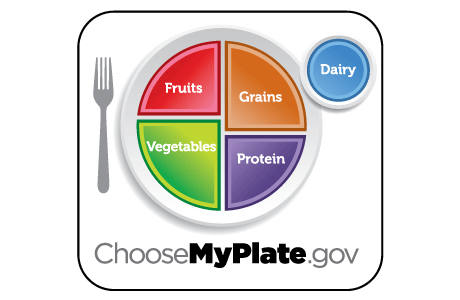 Anyway, I could go on and on about the ways things got tweeked and skewed over the years, but my point is this: I hate the new food plate. Every stride made by the MyPyramid version was lost as the whole thing got dumbed back down again. They offer a few vague calorie counts based on age, a handful of exercise activities and some minor suggestions. At least they kept the word grains instead of slipping back into starches (sometimes listed bread and grains).

I really wish the MyPyramid site was still around. I'd love to see someone create a clean food chart that isn't bullied into shape by lobbies. One where it was based on nutrition, not broad strokes of ideas. Veggies alone deserve ten different categories. Proteins, not 'Meat and beans”. Calcium Rich Foods, not Milk. Possibly with a chart of the many factors that can influence needing more or less of this or that.

I love milk and meat, but I also recognize that they aren't the only way to get the nutrition that they provide. Vegans and Vegetarians clearly demonstrate that it is possible (if not always easy) to get a balanced diet without them. Maybe we could call it the Permies Food Pyramid? Heh. Something to think about. Sorry if I ranted a little there. I almost put this into a section of the forum more suited to flipping tables over, but decided this is best suited to a discussion of food choices.

You are free to call me out if I misquoted a date. You are more than welcome to disagree with me. I am entirely happy to have an open discussion of our differing or matching opinions. I am largely curious to know if anyone else even realized the MyPyramid site did all that. The only reason I knew was because I had been working in a hospital's food service department at the time. I was really disappointed when it went away and the new MyPlate came in. It is so much less useful as a website for improving your healthy eating. So, thoughts, opinions?

posted 6 years ago
A quick search shows that Harvard agrees with you regarding lobbyists influencing the foodplate/foodpyramid. http://www.hsph.harvard.edu/nutritionsource/pyramid-full-story/
They have their own pyramid called Healthy Eating Pyramid and they also have an enhanced version of the food plate. http://www.hsph.harvard.edu/nutritionsource/healthy-eating-plate/

Looks pretty good but I'm no expert by any means.

Stevie Sun
Posts: 58
Location: Devon, UK
1
posted 6 years ago
As an ex-vegetarian I think more consideration should be given to what nutrients are easy to miss on a vegan/vegetarian diet, such as B12 and zinc.

As someone watching aging vegetarian parents I would like to see something which points out that older people can need more protein.

I find lists of foods containing such and such nutrient often misleading because they're not by portion.
Dave Burton
steward

posted 6 years ago
Here's a cool infographic I found online about the history/evolution of the American/Western Diet:

Dave Burton wrote:Here's a cool infographic I found online about the history/evolution of the American/Western Diet:


Quite an interesting graphic there although I wonder how much of an impact the government statements actually have. I would imagine school lunches change based on the USDA recommendations, but it seems that people don't like being told what they should and should not eat. For example, AB 110 was a Wisconsin bill that would have required food stamp (SNAP) recipients to use 2/3 of their benefits on WIC eligible foods.

posted 6 years ago
Interesting that in that iconographic, they list the amazingly detailed and useful website I mentioned as a problem for the previous pyramid, while talking about how useful (which I disagree with) the new website is. I also notice they don't happen to list any problems with the newest food plate version. Difference of opinion I suppose.

John Master
Posts: 519
Location: Wisconsin
9
posted 6 years ago
I love how they are still clinging to the fat is bad notion. Yes some fats are bad, very bad, but when you know what fats are good and how ridiculously good they are the idea of restricting them for any reason is just ludicrous. For instance, Crisco and coconut oil have about the same calories, Crisco is about as toxic a dietary fat you can get. If you ate 3 tablespoons per day you would probably notice huge health problems before long, especially mental health. We buy coconut oil by the 5 gallons drum and the stuff is incredible. I think the rda is about 3 tablespoons per day. Watch how you feel eating closer to 1/2-1 cup per day in various forms. Calorie restriction, good fat restriction and avoiding cholesterol are where most people seem to fall off the eating well wagon. Fat is fuel, if you want to stay active, don't short yourself on good old fashioned clean burning fuel. Cholesterol is the building block of many hormone functions in the body.

You cant grow coconuts in iowa, Sadly I don't see the recommendations changing any time soon...

posted 6 years ago
I was watching the documentary "Fed Up" this evening and started thinking about this thread again. The documentary was highly focused on getting the government to start putting regulations in place rather than listening to the lobby groups as a way of resolving some of the major issues with our food systems. Governments aren't really great at this sort of thing though when there is such a strong lobby entrenchment in place.

I somewhat wonder if others here might be interested in a thought experiment. A grass roots style effort among some of the permies to work out what a good food guideline would look like. Something that covers what is really important. Something that isn't specific to one sort of eating style. Something complex enough to really get at the root of healthy eating, but simple enough that most people can still understand it? Let's say something that could be fit into a single pamphlet and/or poster, since that seems to be a requisite standard of getting people to bother.

John Master
Posts: 519
Location: Wisconsin
9
posted 6 years ago
It's already been done, the Wapf dietary guidelines are as thorough and complete a set of nutrition guidelines you will find. Problem is the overwhelming majority of the items need to be prepared at home which sounds an aweful lot like cooking which in many ways is how we got to where we are now! Also very few of the items make any large corporation any substantial profits. I have been following the guidelines as best I can for over 2 years now, this is clean natural wholesome nutritious traditional eating that supports all aspects of health. It just doesn't support mcd's, hardee's, carls jr, wendys, fazolis, dominoes, pizza hut, the tavern, the gma supermarket, the boxed cereal companies, the lowfat phony food companies, the convenient store or anyone making a big profit selling empty calories.