Spero Latchis
Posts: 7
Location: Bir Himachal Pradesh India
posted 5 years ago
Im building a RMH for the first time. I live in rural northern India and finding any type of building materials here is a challenge. I am wondering if there is any other way to insulate the heat riser than to use oerlite, pumice, etc. WE do have lots of clay soil though. Is is possible to use any type of vegetative material covered with clay slip? such as cron husk, paper, bamboo. etc? . Glass bottles covered with clay? What about long thin glass strips? An engineer visiting from the city gave me a sheet of 1/4 inch Nitryle rubber foam that they claim is used for insulating rockets. I have no idea what this is really. Could this be used as the outer layer of the insulation, with a clay wood chip mixture inside? Just trying to find a solution in a difficult place.
Getting ducts is another problem. Straight lengths are easy, but t's elbows etc are not. The local metal fabricators can make straight pieces easily but not bends and angles. Again someone suggested that in the city we can get flexible lightweight duct. Is this suitable if I can obtain it?
Trying to assemble materials here for any project is always difficult. We must think very simply. Any suggestions are welcome.

PS. Ive searched for the answer but cant find it, if it has been given before my apologies.

posted 5 years ago
The answer in my opinion is: CLAY. It's possible to make the whole RMH out of clay and rice husks, straw or anything else that will burn out when heated. That will leave small cavities filled with air, thereby turning the clay matrix in an insulating material. When the clay need to be heavy and monolitic, for the mass bench for example, use sand or gravel and use the clay as the matrix again. Maybe you have to replace the feed tube every year but that shouldn't be an unsurmountable problem when the possibility is built into the design.

In practise, I'd think it's time to start making adobe bricks and build the entire heater out of that. Even the ducts doesn't need to be there, a mud tunnel would be just as functional. Spanning a tunnel could be done with an arch or a dome when necessary. But when the span isn't that large it could be done with mud bricks too. But watch out for an adequate thickness of structural clay and straw or something else fibrous material all around the tunnel.

In other words: it should be perfectly possible to build the entire Rocket Mass Heater like a MUD STOVE.

edit:
When the availability of barrels is also a problem, you could mimic this item in adobe too. It doesn't need to be round after all, any shape will do provided it's high enough. But round is easier to end up in a dome...

edit2:
Flexible duct has the disadvantage of being not smooth inside so this would cause a lot of drag. Also, when it's lightweight it could be aluminum which can burn out close to the combustion chamber. You could use the straight metal duct the locals are able to make and do the bends in cob. Advisable to make those bends cross sectional area wider to avoid drag.

posted 5 years ago
Spero Latchis : Ianto Evans, whose apt observations of several ancient technologies from many places lead to the creation of the Rocket Mass Heater, RMH-

Designed his units to be made from the cast-off of Western Technologies.

For ~20 years~ we have been building simple RMHs based on this concept, there is still much to be learned from his seminal work ''Rocket Mass Heaters''

available as a Downloaded PDF File at Rocketstoves.com.

Hopefully, among the 28,000 + members here you will find a near neighbor who can provide more direct help!

Good luck, and please keep us advised of your progress ! Big AL

I think its a great simple solution. Yesterday I found fire bricks at a hardware store for about 60 cents each, so those will help with this stove. THis one goes in our 40 degree (indoor temperature) cement ice box house. Our idea though is eventually to take a workable design into local mud homes, where they use smoky tandoors. I think the clay/ mud construction has to be the answer, since the cost and availability of other materials is prohibitive.

By the way if anyone hears of an experienced stove builder who would like to volunteer for 6 months here building stoves, please let me know. We are in the beautiful Duladhar mountains.
spero

Posts: 3113
Location: Upstate NY, zone 5
152
posted 5 years ago
That sounds like your ideal solution - use a few firebricks in the feed tube and burn tunnel where they are subject to abrasion, and make the rest of cob, either dense or insulating as the location requires, where the only cost is time and effort. People who build mud homes should be well able to build an RMH with the same techniques.
Rebecca Norman
gardener & author

posted 5 years ago
Hi from a couple hundred miles due north of you, where we had exactly the same issue about six months ago! We're in Ladakh, India, and we just visited Bir in September, so hi! Deer Park was very very good to us, and we visited Dharmalaya. Are you associated with either of them?

We wanted a pair of rocket cookstoves to reduce our use of bottled gas (we use solar cookers for a good portion but it can't cover all, and we'll have biogas soon but it won't be much in this school with 50+ people eating three meals a day)

Vermiculite, perlite? What's that?! Home Depot? Haha! We have a lot of experience with cob and mud building, so we made a heat riser out of mud with a good amount of chopped straw in it. It lasted for about 6 months. The picture shows the broken remains, after we removed the ash that was packed around it for additional insulation. I don't know if it broke entirely on its own initiative or if things kept dropping in there, since we put pots directly over it.

The barrels were easy to get. There are a lot of used barrels around the region from all the road construction and army. Since we are using it for cooking, we cut out the top of the barrel and put large pots directly on the barrel, and add this sheet-iron ring to reduce the hole size for smaller pots.

The chimney pipe (not visible in picture except the rectangle in the upper back of the barrel) was also easy. Sheet metal workers are all over the place, and among other things they make pipes for "bokhari," the North Indian word for any kind of heating stove (wood stove, kerosene, etc). They don't normally make them in 8" dia but they can do that easily. They also know perfectly well how to make bends for the pipes. Bir is chilly enough that people there must use bokharis. Do they also use those awful open coal ember angitis that I saw in Uttaranchal? (Ugh! Enough to inspire you to build a rocket mass heater no matter what it takes!)

There were other issues with ours, like it's built on a floor that was rough slates over earth, mortared with cement that burned out. And we built it down in to the floor so ash removal was not great and I think maybe it got clogged.

I have since gotten my hands on Ianto Evans's Rocket Mass Heaters book, and he mentions that soft red bricks are a very good material. Well, I know you can get those in Himachal.

You might want to talk to Sourabh Phadke, who has been involved with building those lovely Didi-designed earthen buildings at Dharmalaya, has extensive experience building with earth and natural materials, AND! he's currently in Himachal, several hours west of you, at Sambhaavnaa. He was around SECMOL when we made the rocket stove. His website soarhub.in has lots of great cartoon-format info about earth building, natural materials, and composting toilets. I consider him a god, or at least a minor deity, for sure.
Broken-rocket-stove-at-SECMOL.jpg 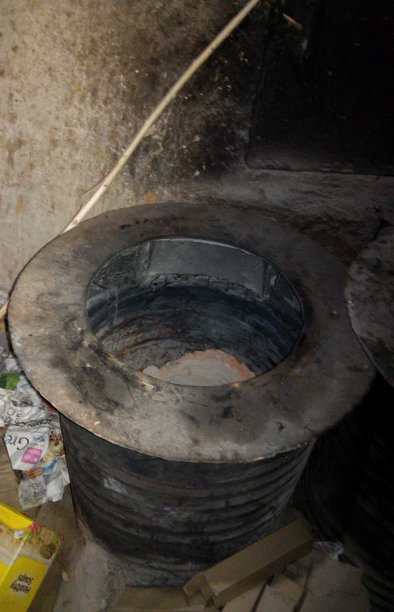 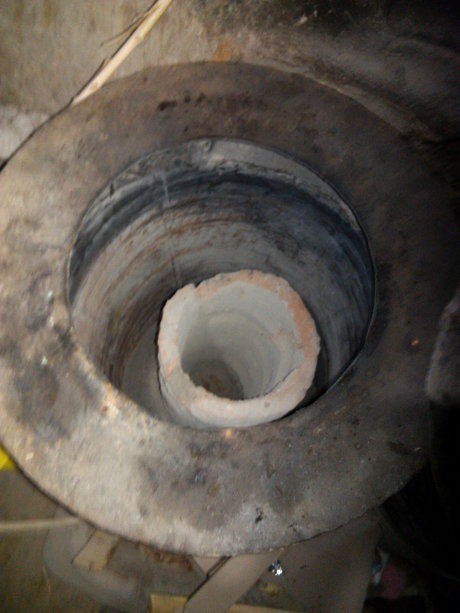 Also good to see an example for guidance on what works with the materials available and what doesn't.

I do think the cookstove usage has to be a factor in the short lifetime of the riser; aside from possible things dropping on it, it will be exposed to frequent fast heating and cooling as pots are moved on and off the stove, which is a bad stress for clay.

Also, it looks like the riser is only about an inch thick, which lets cracks be more problematic than in a thicker riser. An RMH is generally recommended to have 2" or more of perlite/clay, and the fragility of an insulative clay/straw type riser would tend to increase the recommendation. It would be very interesting to see the results of three stoves with risers of the same material 1", 2" and 3" thick.

Another possibility for increasing longevity might be to add a chicken wire or wire mesh wrapper around the riser to hold it together even if it is cracked. Wire in this location in an RMH is reported to be durable in spite of the heat. I don't know about the case of a rocket stove for cooking.
Rebecca Norman
gardener & author

posted 5 years ago
Three excellent suggestions, thanks! Too bad one of our students has already rebuilt it last week, and it will probably fall apart again. Lots of learning opportunities around here! I'll discuss with the inventor in charge here and see if next time we can make the riser thicker, and hold it in with chicken wire. I'm also considering changing one of them from an open stove top to a closed oven box, so if we do that we can see if that helps keep the riser in good condition by reducing thermal shock.

Yes we are associated with Mark at Dharmalaya, we are neighbors and he is sponsoring our work. I Was just up there the other day. We also hang out a lot at Deer Park. Mostly my job is to run the homeopathic clinic in town. The farm etc are my hobbies and other passions.
Unfortunately our landlord just broke his promise to let us build a heater inside. Now he says no wood in my house. So we are back to square one looking for a new house, since this one is about 35 degrees inside this morning, and maybe gets to 45 during the day.
We will get back to this project as soon as we can, and all the advice offered here is invaluable. I think that all the issues have been resolved. As long as we can get the metal workers to actually do the work in a timely manner that will suffice for the ducts. We have some fire bricks and can indeed get a barrel. So all looks good to go, after we find a new house!
Next time you come to Bir please visit.
Spero