Tin cans, yes or no?

Marion Kaye
Posts: 68
Location: Essex, UK
3
posted 7 years ago
I want to make a stove to use for outdoor use for cooking, and heating pans of water for dyeing and scouring fleece.

I tried an L shape with just the engineering bricks on a concrete base, but it wasn't a roaring success. It was hard to keep the fire going, but it did show promise, inasmuch as air travelled in the direction it was supposed to! Part of the problem was that it is hard to keep pushing the sticks in, especially without breaking up the hotspot nucleus of the fire. I am used to using hot embers to keep a fire going, but this is obviously not the way a rocket stove works. Another problem is probably that it takes a lot of burning to get the bricks hot enough to stop taking heat out of the hotspot, so my next attmept is going to involve insulation, like all the better versions use!

My next attempt is probably going to be a 'J' shape made from 4" by 7" tin cans, set into a larger brick J with the gap infilled with vermiculite. Despite there being loads of videos out there of tin can rocket stoves, I get the impression that they don't last long, making me wonder why so many people seem to use them. Is it just because they are cheap and easy to work with, so they are 'disposable' or are the reports of the rapid demise of the cans from people tring to sell you sheet metal and welding gear? ;P

Comments and advice will be gratefully received.

posted 7 years ago
Marion,
You've found out yourself a lot of mass in the combustion zone isn't handy. Low mass and insulation will ramp up the burn temperature and lead to cleaner combustion. Tin cans, any metal in the hottest zone, even stainless, won't hold for long. When it does hold, the stove is working sub-optimal. I've done a lot of experimenting, helped by others' suggestions and a gas analyzer. The best heater I've made out of steel and 1/8" thick failed in about 5 hours of burning. The steel isn't melting but it is corroding like mad in the oxygen-rich and carbon-frugal hot environment. After every burn I could peel the flakes off at the inside.

Bottom line: look for a non-steel refractory-like material and put lots of insulation around. Low mass, highly insulated and preferably not conductive. And of course the right proportions and so forth. Have you read the Rocket Mass Heater book? This is mandatory literature for stove builders, see this webpage

R Scott
pollinator
Posts: 3909
Location: Kansas Zone 6a
235
posted 7 years ago
Metal cans make good forms to cast your own, but so do bundles of twigs wrapped with cardboard. If you have good clay.

Marion Kaye
Posts: 68
Location: Essex, UK
3
posted 7 years ago
Ok I think that settles it then, I need to get to grips with cob etc.
I've been round to snoop on the oversized foundation excavations on neighbouring property. As I suspected, they have taken the sand away, but the overburden spoil is a mish mash of topsoil, boulder clay, and even London clay. I was warned to keep away from the exposed London clay though.

"It's like the Somme", and it looked like a digger had sunk into it at some point. Tomorrow, I will put on my wellies, and if I can't get to it, I can at least do some basic soil testing on different colours on the spoil heap.
I've made low temp insulating bricks from local clay before, but not in this country, and I don't have a supply of sawdust any more either. Chopped straw is a possibility though.
Thanks for your help.

Peter Ellis
Posts: 1666
Location: Fennville MI
82
posted 7 years ago
Just to confirm a conclusion I think you have already reached, the tin can rocket stoves for cooking are intended as 'field expedient' solutions for more or less temporary situations. Good for heating up a can of soup or the like, but not suited for any long term use.

don't have a supply of sawdust any more either. Chopped straw is a possibility though.

Posts: 3454
Location: Southern alps, on the French side of the french /italian border 5000ft elevation
180
posted 7 years ago
Marion, since you're in UK (London clay happens only there innit? )

I would try to source some coal's ash. to mix with that london clay. Prety sure there's still people around you heating with coal. That could make it more durable. I checked, and that london clay has been used for bricks suposedely. So it should be good. http://en.wikipedia.org/wiki/London_Clay Use your tin cans to make the form. And other ones, if you can get some biguns! For the outer skin, where it would hold the vermiculite.

Marion Kaye
Posts: 68
Location: Essex, UK
3
posted 7 years ago
Coal ash would help reduce shrinkage, so would sand but neither will improve insulation. Sawdust would burn out making a porous insulating matrix of holes, indirectly also helping to reduce the chance of cracks. I'll have a try with the vermiculite, I was concerned that the pores in the vermiculite would get filled with clay, but it seems it works fine.

This is pretty close to what I want.
Thanks again
Marion Kaye
Posts: 68
Location: Essex, UK
3
posted 7 years ago
Well, I've mixed up a couple of soil samples with water and left them to settle. I picked a gritty lump and a very smooth clay, the gritty lump is useless, the 'grit' includes small pebbles! The clay although it seems more plastic than the gritty sample, is settling faster, I'm not sure what implications that has. Should I do a shrinkage test or just assume it has high shrinkage?
Going with the high shrinkage (99% sure it has, it's used for potter's clay after all) is it ok to use 'as is', for mixing with the vermiculite for riser insulation, or do I need to add anything else? Or is classic potter's clay too much of a good thing altogether? Also is it ok to wedge (knead) it in, or should I reduce the clay to slip and mix wet, or dry it and mix as powder then wet again to form the riser?

With a bit of luck there should be a mixer attachment for a drill lyng around somewhere. Hubby was a potter, and he used it for mixing glazes.

Posts: 3958
Location: Upstate NY, zone 5
384
5
posted 7 years ago
Mixing the clay to thin slip and adding perlite is probably the most common method, but you can also use the clay in dry powdered form if that is convenient for you. Doing that, you start with the perlite, mist it so it is damp, and sift/sprinkle clay over it and mix, repeating until you have an even distribution of moist clay coating each perlite particle. You need to make sure you have enough clay to achieve the standard "crumbly snowball" consistency, but you can probably get a good strong mix with a bit less clay and thus more insulation than using the slip method (haven't tried the slip method yet).

Look for the thread(s) started by PNWDave or David Eaks, both here and on donkey32.proboards.com, for detailed descriptions with good videos.
Bonnie Michelle
Posts: 10
Location: Winnipeg, MB
posted 7 years ago
Hi Marion,

Our experience with the tin can rocket stove is definitely more of an easy camping stove that is not for long term use. We used Red River clay and rocks for our insulation but our proportions on the cans were all off so we never really got a proper hot burn on the inside. I had to empty out coals a few times. I still found it worth while and the food we ate off of it was delicious.

I am interested in making a better, more resilient version of this stove. Have you ended up making one yet? I'd love to see pictures if and when you do. It sounded from the discussion like you were planning on trying out some cob and I am curious about your experiences with it. 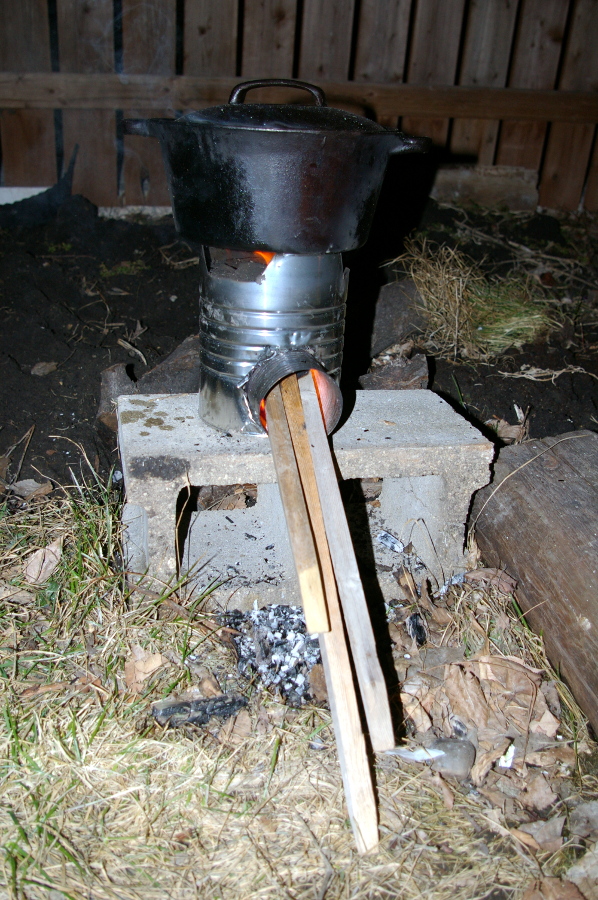 Posts: 3958
Location: Upstate NY, zone 5
384
5
posted 7 years ago
A tin can stove of that size will probably be no better than any other style. The rocket stove gets its efficiency from an insulated burn chamber and enough length for the fire to burn completely. I think you would need to make it twice as long in both directions, and insulated all over, before you would start to see the real rocket effect.
I built a rocket-fired cob oven last fall with about a 20" horizontal and 36" vertical combustion chamber, and that roars like crazy even in early testing, and makes no visible smoke when warmed up.
Marion Kaye
Posts: 68
Location: Essex, UK
3
posted 7 years ago
No, sorry not done yet. I will post pictures when I get round to it, but I've been distracted by greenwood projects initiated by the felling of a large ash tree. I also need to purloin sufficient clay from the excavations, and it's heavy stuff with no easy wheelbarrow route, so has to be carried several yards.

On the plus side, I have been on the day classes on cob/daub/clay lump, and am a lot more comfortable about trying it out with the local stuff and whatever else I can get easily/free.