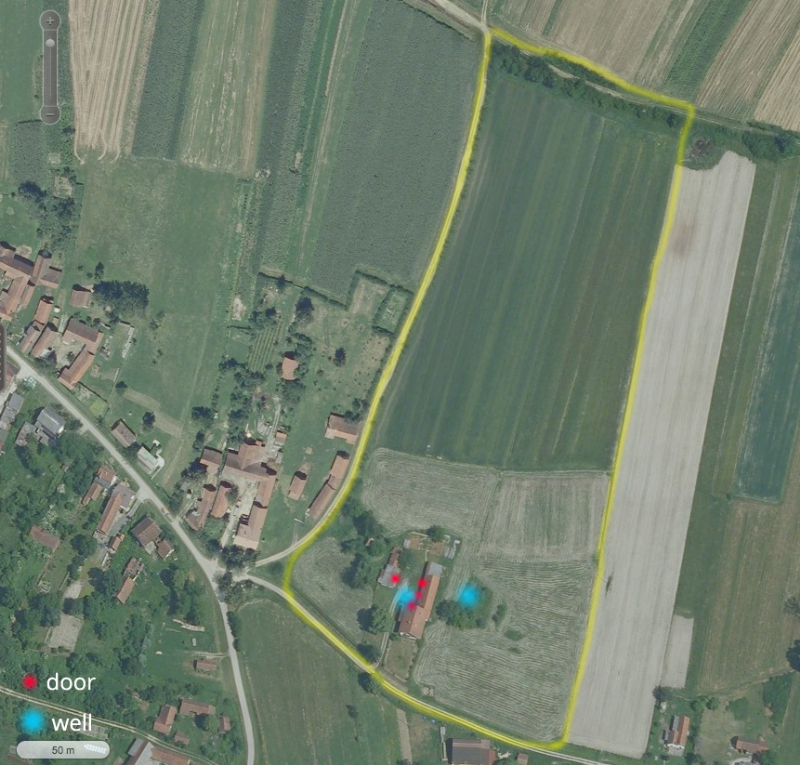 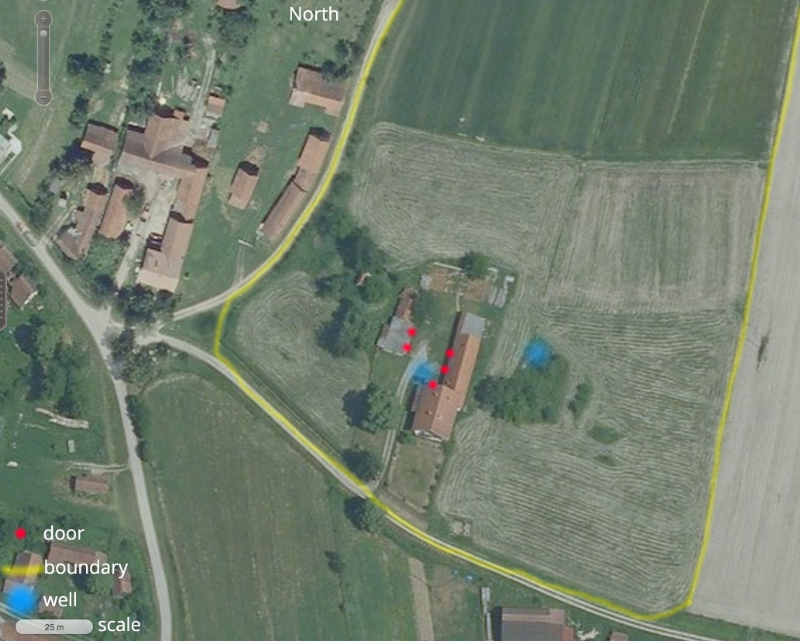 The land area is 40,000 m2 (around 9 acres) and has a couple of old pear trees on it. The soil is a clay type and flat. There are drainage ditches around the Northern, Western & Southern boundaries. There are two wells on site close to the main farm house. If anyone can help work with me on a possible land use design that would be wonderful. As you can see from the images it is a near total blank canvass for a permaculturalist's paintbrush. 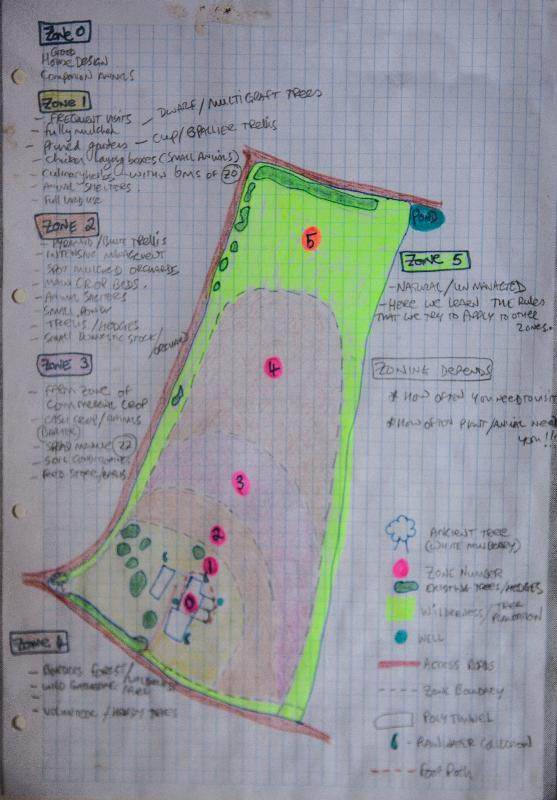 I would be keen to get some fast growing trees planting around the border. I've read that black alder would be good & the Chinese paulownia tree is a very fast grower (Wiki). I would definitely move to establish a mixed fruit tree orchard favouring pears, apples & plums. I am also open to the idea of constructing polytunnels on the site - perhaps to the east of the main farm house so as to occupy an accessible & complimentary location.

Here are some site photographs of the house and nearby land. The long building extending northwards from the back of the main house were used as animal sheds (calves/pigs). 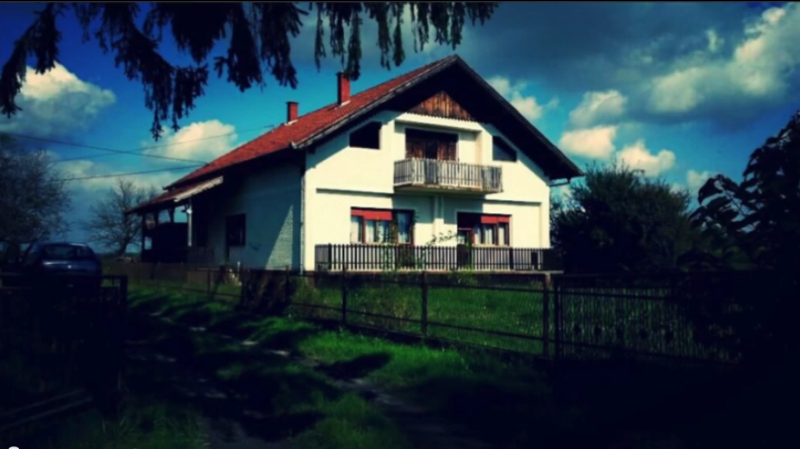 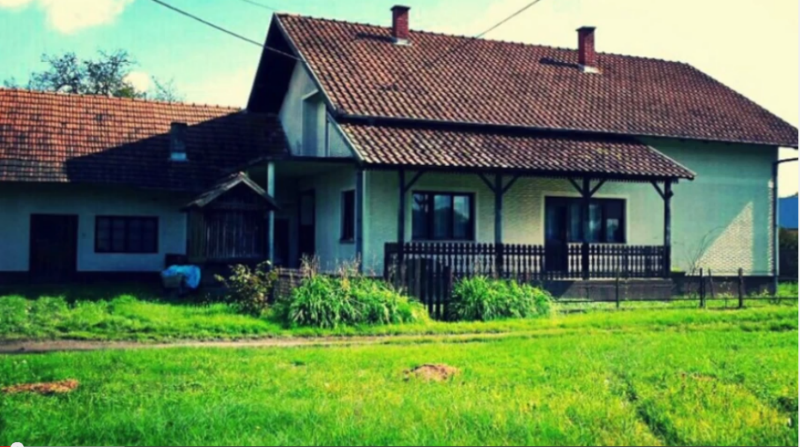 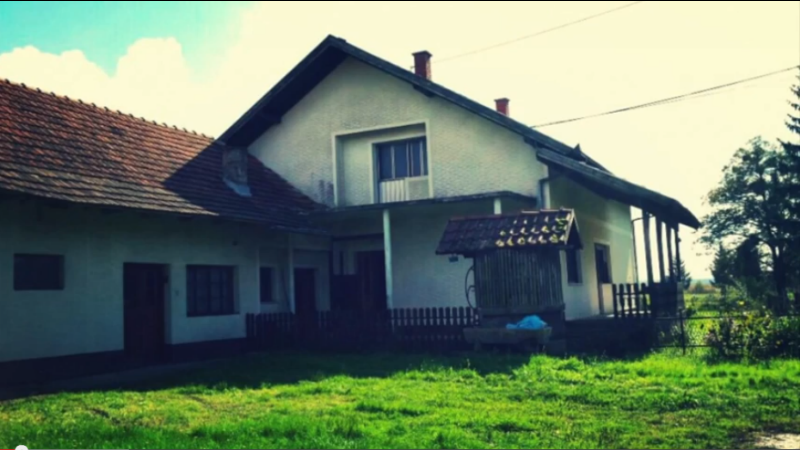 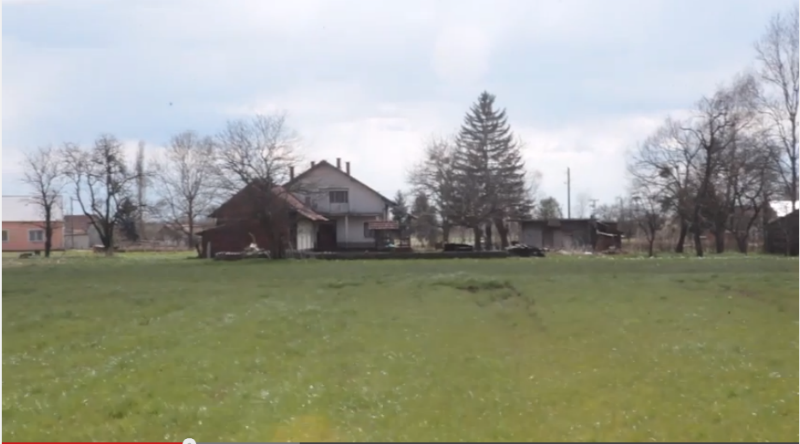 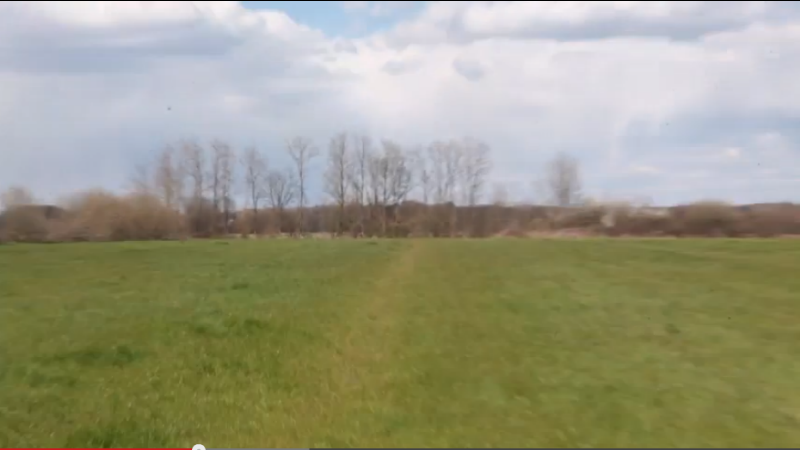 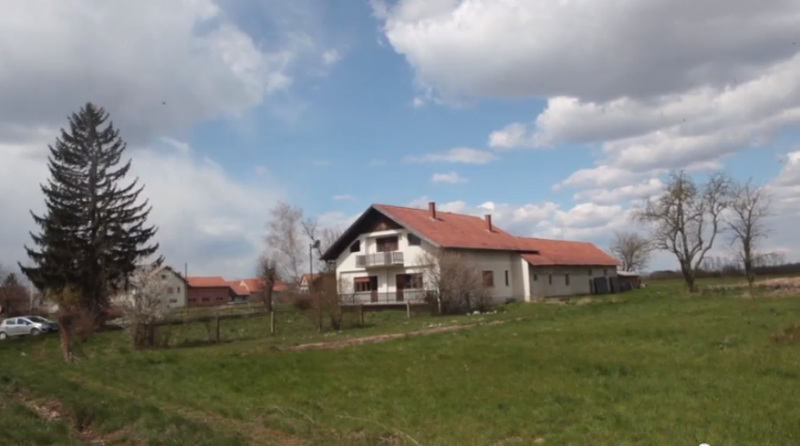 I would hugely appreciate your input. Thank you for your time.

Judging by the red roof tiles and the narrow strips of cultivated land near your site, you must be somewhere in Central or Eastern Europe

4 hectares is quite a bit of land, and with it being a blank canvas, the options are virtually infinite.

In order to reduce the options to a manageable number, you could start with defining your goals. What do you want to obtain from your land? Do you aim to earn an income by selling crops that your land produces? Or do you wish only to grow for own consumption?

Although I'm ignorant of your goals, your design looks very reasonable. I myself am in a similar situation (rectangular plot, house near the bottom, clay soil) though I only have 1/2 hectares and the land is sloping gently. You are wise to plant a 'wilderness' zone around the perimeter. I'm certain you will derive a lot of benefits from it once it has grown into a mature hedge.

I can see you describe your Zone 5 as the 'natural / unmanaged' zone. That's fine, but personally I - rather than leave the land to its own devices - would try and put in even more trees to create a forest or woodland. I would manage it in the beginning, till trees establish, then would leave it 'unmanaged', so it takes care of itself.

Your design options will be further reduced by the limiting factors that come with your land, such as type of soil, or certain pests that may be common in your location.

For instance, I had grand plans when I designed my plot, and decided to ignore the limiting factor of clay soil. Result: I planted certain trees that I wanted very much, but were not ideal for my location - e.g., sweet chestnut trees, which can survive but not thrive in heavy clay and continental climate with cold winters. By contrast, elders - which are not the most precious or desirable trees, though I do like them - are thriving in my soil, they quickly fill out the hedge, AND they don't seem to be bothered by voles, which are wreaking havoc with my other species of trees and shrubs...

In a way, we should be thankful for limiting factors, as they might make our design choices easier

That's all from me for now. Keep us posted on your progress.

Haha yes indeed the house is in my adopted land of Croatia...! My ultimate goals are to manage a resilient homestead with my family. Selling to local people isn't of such importance, however I would like to welcome the public to come, visit & learn about the techniques I intend on using. Any surplus will be shared out & of course I would love to get back to our traditional European system of bartering. I am a big fan of the "brain drain" from the urban areas back out into the countryside. I myself spent many years working in global advertising, making photo & video shoots only to realise that city, urban living makes me sick both mentally, emotionally & physically. I also get sad when I see so many villages decay because the young have fled to the city (to get themselves in debt & buy stuff they really don't need). However rather than bang my drum against empty, environmentally damaging consumerism - I have decided to create an "island of light" - kind of eco beacon that will hopefully guide those who share similar ideals & pull them closer.

I'm keen on establishing a mixed orchard, and then a no dig vegetable garden (with herb patch). Then in time get some chickens, ducks, goats - and fish for a pond. To keep things ticking over the colder months I intend on building some polytunnels, and will look into installing some kind of root cellar - such as the Groundfridge by Weltevree (http://www.treehugger.com/kitchen-design/get-back-your-roots-groundfridge-prefab-root-cellar.html).

I will post updates & will be active within this forum - it looks likely a fantastic resource. Thank you very much for your feedback.

Here are the temperature & rainfall charts. I haven't done a sector map yet - because I have not moved in yet. 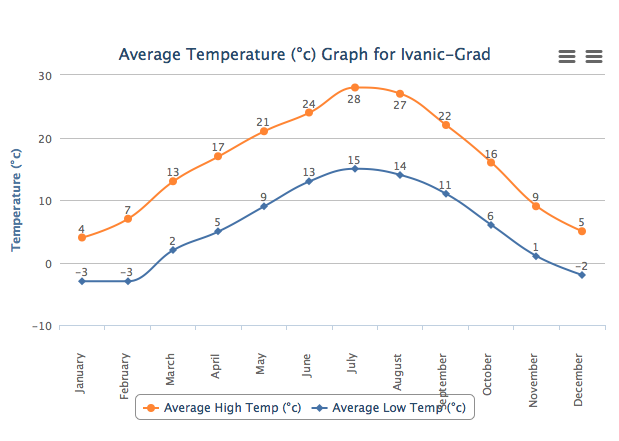 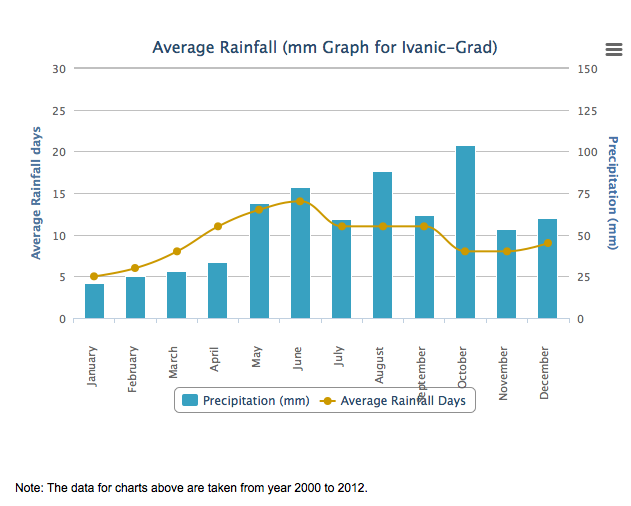 if your location is near Ivanič grad then I'm about 200 km to the north of you (Murska Sobota, Slovenia). The landscape is very similar.

For me the biggest factor I was not accustomed to was wind. In the open plain we get quite strong winds especially during Spring and Autumn (about 50 km/h northern cold, 70 km/h southern warm & moisture-laden wind).

So creating windbreaks, whether single-line or consisting of many lines, is something I considered necessary to make the site more pleasant to people and animals, especially bees.

Your sun exposure and soil type also sounds similar to ours. So let me list the species that came in handy here.

- Maybe:
* paulownia (or the quite similar catalpa) which you mentioned - this could be a problem if a) your soil gets waterlogged during winter or b) it is in such an exposed location that its huge leaves become a drawback in the wind, leading to breakage; we have some on our site but they are surrounded by other plants
* pine, including species for collection of edible seed
* evodia if you go with bees
* new-mexican locust (robinia neomexicana, flowers later than black locust) and maackia amurensis (nitrogen fixer + bee forage seasonal replacement for sweet chestnut) -- just starting these two from seed this year, no concrete experience yet; again, this is a bee-oriented experiment

- Definite no:
* plants that can't stand all-day sun and wind exposure - just too much bother trying to make them grow where they are not supposed to

In such a large area you will probably also have a lot of pressure from animals - voles and deer. Make sure the village cats feel welcome. Fence sensitive newly planted areas. When you start plants from seed / cuttings give them an extra year in a pot / barrel before planting out to increase the chance of surviving the elements and animals.

posted 5 years ago
Fantastic, thank you neighbour...! You bring me a wealth of knowledge thank you. Yes, I have discovered a forest of black locust and have used the boiling water technique to germinate the seeds. I'll search for all the plants/trees/shrubs that you mention and see what I can find and plant. I've been re-digging the neglected drainage ditches on the property to reduce the surface water. My wells are full to the brim. Yes, it does get rather windy - something I took note of when I planted some fruit trees last autumn. I read that it's a good idea to face the graft scar away from the prevailing wind direction. It is amazing how much one can learn just by watching and then researching online. Once again - thank you for your time, feedback - you are welcome over here anytime.

David Livingston
pollinator
Posts: 4328
Location: Anjou ,France
245
posted 5 years ago
One crop very few people think about is ..... Er ..... Well people. . Are you near any touristy areas ? The best price you can get for your crops is by turning them into meals and selling the to folks who stay at your place .
I know someone with a similar sized plot of land who has " gypsy " type caravans ( they are not really ) and does a great trade in breakfasts and dinners .he only has a couple but it's such a high mark up he does ok Check out the price for accomation in your area and how much breakfasts cost