posted 6 years ago
Hi garden friends,
I have a small, raised garden plot (4' x 9') at a community garden here in San Francisco, CA, USA. The native soil is almost pure sand, as this whole neighborhood was sand dunes until just after WWII, when it was "developed". I've had the same plot for at least 10 years, and have added manure and compost, etc. In January, 2013, I had to dig the whole thing out to redo the wire lining, because the old one had rusted out and the gophers were eating everything. I decided to try a sort of no-dig, permaculture, fruit/vegetable guild at that time, as an experiment.

I put in scarlet runner beans, chayote, a dwarf blueberry, alpine strawberries as a ground cover, walking onions, garlic, a small herb plot in the center with oregano, sage, thyme, lemon balm, stevia, a prickly pear, and feverfew. I had a few annuals, like kale, which in this climate, live at least 2 years; I only just pulled them out this month.

The chayote took over, and I think it's sucking up all the moisture in the plot. I may take it out this winter. It shaded the beans to the extent that they produced very little, when they usually produce a lot. The walking onions just sort of disappeared; I don't know what happened to them. Everything else did well.

I haven't dug the soil at all in the past 2.5 years, except very minimally to plant a seed or small plant. I do add a LOT of compost whenever I can get, which really gets sucked right into the ground.

So here's what I've observed. The soil is quite compacted and root filled. I have a lot of wine bottles that I use for watering (necks stuck in the ground). It can be almost impossible to get them into the ground in a new hole. I recently dug up a few of the strawberries, as I wanted to move them to a different spot. When I moved them, I forked up the soil in that area to plant them. I noticed that after forking up the soil, the garlic, which had been sitting for months doing nothing, really shot up and grew a lot. The strawberry divides I planted also have grown well and quickly, where as the ones I transplanted to the no till area are quite small and struggling. It's now easy to stick a wine bottle neck into the ground in the tilled area.

So, is no till such a good idea? I'm beginning to wonder. Thoughts?
plot.jpg 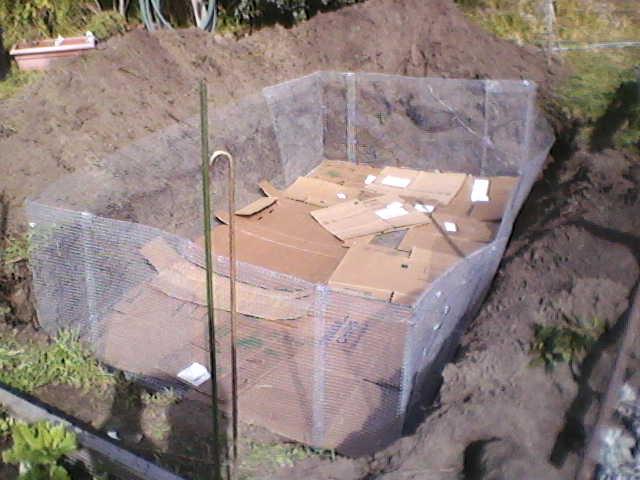 I wrestled with reality for 36 years, and I'm happy to say I finally won out over it.

Good job noticing the compacted soil and the difference a little aeration made.

I don't know enough of the other variables involved in your plot, but no till does not necessarily cause compaction. Just one thought that might be contributing: every time you press a wine bottle down into the sandy soil, the neck of the bottle compresses the sand particles against each other. If it is sharp sand, with lots of angles, it will find optimum ways to fit together and then remain that way, which equals compaction.

There are lots of schools of thought on everything. I took a class on life in the soil from Dr Elaine Ingham. Her theory, and she is educated and knowledgeable about soils, an expert in the field, is that if you can introduce the appropriate life forms into the soil, and they take up residence, then you will never need to till again. You might need to till or disturb one more time to get things introduced, but that would be it.

You might have already done this, might know plenty about it already. If so please forgive. I just searched the forums to see what I could find about Ingham's methods, and here is a post that might be a good starting place if you are interested. A series of lectures on you tube.

The soil food web includes bacteria and fungi which feed on the exudates from the roots. The fungal fibers (mycorhizeae) transport nutrients minerals and water to the plants' roots, greatly extending the ground the roots draw from. With out the mycorhizae, the plants need more water and more amendments. Tilling disturbs and disrupts the mycorhizae, and exposes the soil organisms to the ultra violet rays of the sun.

(The soil food web also includes protozoans, nematodes, microarthropods, and more. They all live in a balance with the photosynthetic plants).

Maybe you do need to fluff things up once in a great while, maybe figure out what is causing the compaction, if it is not pushing in the wine bottles, but there is lots of evidence that plants do very well without tillage.

Here is another link. I searched the soils forum for compaction, and here is the result of the search. Looks like lots of ideas are floating around.

That's about all I have to contribute, but surely there will be an abundance of opinions experience and theories offered, and a great thread develop.

posted 6 years ago
hau, Lori As you have discovered, compaction of soil creates lots of issues for the plants we want to grow.
No-till is a method which requires observation and application of corrections, especially when it comes to tilth (amount of compaction) of the soil.
Broad Forking, is one method to loosen soil and get air down into the soil. Using certain cropping patterns will also help with this without the need of physical exertion.
On our place we had compacted, rocky sandy loam (actually we find a red clay one to two feed down). We have started the following regimen to cure the particular issues of our land.
We plant daikon radish, rape, alfalfa, crimson, white and yellow clovers on new areas that we are turning into garden areas. These plants are put in the first time around the end of august to the middle of September.
After first frost these spaces are chopped and dropped, left to over winter as mulched areas. The deep root vegies (daikon and rape) rot over the winter, this leaves humus in the soil as well as looser soil from the action of the roots as they grew.
The clovers replenish nitrogen over the winter.
In the spring, if the soil is not to our liking, we replant the winter crop and add buckwheat, cereal rye, oats, and some food crop plant seeds. As the season goes along, the daikon and rape are chopped at 8 weeks, the clovers are cut every five weeks.
This method allows us to continually add to the mulch layer, loosens the soil and adds humus deep into the soil. Usually by the next spring we have very friable soil in an area we use this method on.

We have pasture areas for our guinea hogs, where we use daikon, rape, turnip, alfalfa, buckwheat and oats. When these plants have reached 8-9 weeks old we turn the hogs into the newly replenished paddock for about 4 weeks, then the hogs are moved on and the used paddock is left to rejuvenate for around another -9 weeks. Our hogs do not eat so much of the plants that they can not regenerate in that time frame but as we add more paddocks, each one will have a longer rest period. We keep a small flock of chickens in the same paddock as the hogs. Everyone moves as a group from paddock to paddock.

The only area we have that has been tilled is our root vegetable garden space, this one 5' x 20' area has been triple dug, sifted for rock removal and humus amended ( straw from the straw bale gardens and used potting soil(from sweet potatoes that are crate grown) are the normal amendments) we use these most everywhere we want to improve the soil. Our orchard trees have a 4-6 inch deep mulch and these get compost on top two to four times a year. Our compost contains 20% spent coffee grounds and everything we don't feed the hogs and chickens. We use hot composting methods then let the heaps cool before we sift to remove unfinished components (these go back into the new heaps). The finished compost then gets an addition of mychorrizal inoculant and allowed to "ripen" for about two weeks before it is placed around the trees/ garden plants. The areas of our land that are being used for animal and food production currently have a very nice composition and contain at least 10 different fungi that are beneficial to our plants and trees.
By the way, we have been at this for only two years now, the first year was entirely spent on reclaiming land that had been previously cleared prior to going fallow for seven years.