Dale Hodgins
Posts: 9002
Location: Victoria British Columbia-Canada
670
posted 4 years ago
This idea just came to me a few minutes ago. I'm trying to avoid my usual habit of reinventing the wheel.

I'm looking for good photographs of chainsaws that are being used as the cutting head for table saws or radial arm saws.  Google images produced many instances of a chainsaw being used as a mitre saw, but nothing useful with the table saw idea.

I don't anticipate altering an existing tablesaw. Instead,  I would like to have a large workbench,  with a slot in the center, and a chainsaw bar protruding.

This saw wouldn't be used to create fine cabinetry and spiral stairs. It would more likely be used to split large timbers down the center. I sometimes get glue lams, paralams and timbers that are in awkward dimensions.
.....
Most of us are completely familiar with the operation of Alaska mills. I'm not interested in pursuing that option in this thread.
.....
My cabin needs a big workbench outside of it.  The tablesaw function,  will be one of many uses. The saw needs to be quickly and easily detachable, since this will not be it's primary function.

This contraption will be used with one of my electric chainsaws. I have two cordless electric saws and two corded saws which would be suitable.

The E-go cordless has a 14 inch bar. The Greenworks cordless has an 18 inch bar.  Both the Stihl and Husqvarna corded saws have 16 inch bars.  A few months after paying over $300 for the Stihl,  I got the second hand Husqvarna in new condition, with the original chain, for $50. They are close to identical.   Cest la vie. 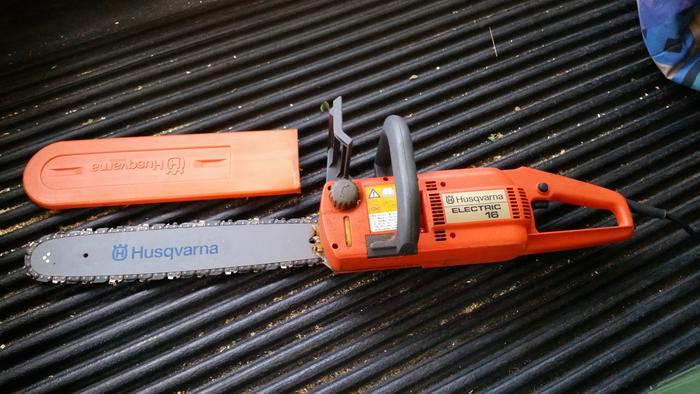 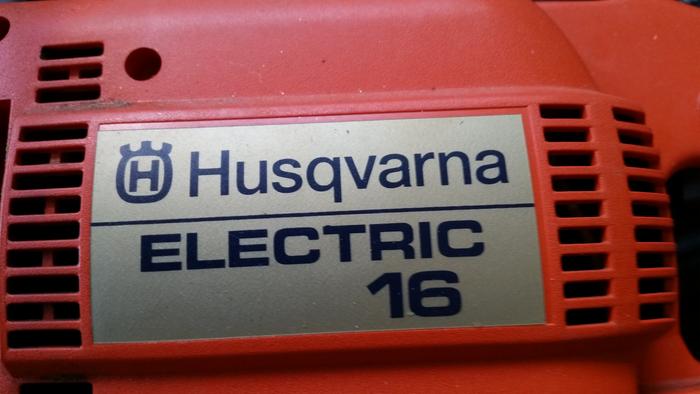 Great and imaginative idea. Love the idea of a deep cut table saw. Mulling it over in my mind the biggest challenge would seem to be mounting/bar stability. One idea is to give up a bit of throat depth (and open top) by utilizing an upper arm bolted through the hole at the bar end. That would lock the upper end of the bar down, with a second point of contact, reducing the lever effect of large saw pieces. The lower connection could be u-bolts clamping the handle with counter sunk bolts in the table face. However you attach, be mindful of the vents, so the electric motor can cool.

My google-fu is no better than yours, though. Wish I could share some visuals; but this is the first time I have ever heard of the idea. Well done.
Pete Arthur
Posts: 17
posted 4 years ago
The have been used for 20 years in the stressed skin panel world.
That is how you cut 12" thick foam panels in a timely manner.
But think more of a radial arm saw.
I know chainsaws work fine when the bar is down, but not sure the oiler will work when the saw is "upside down".
And, if in radial arm orentation, the only thing under the table is the sawdust box.
Not the fine machined workings of engine and/or air cleaner.
Ron Duft
Posts: 20
Location: Alberta,Canada US Hardy:3b Annual Precipitation: 15" Wind: 62mph Temperature:-45F to 86F
2
I like...

posted 4 years ago
I have seen chainsaw powered band mill attachments, metal/concrete circular saw attachments and of course a winch. Seen lots of hydraulic driven chainsaws used in firewood processors.
I have seen a cutoff saw hinge used with a chainsaw but never a table saw, maybe a vertical band saw with the motor on top? Best of luck

Key piece to look at is the splitter bar they attach at the rear to keep the material out of the chain on the reverse stroke.

Dale Hodgins
Posts: 9002
Location: Victoria British Columbia-Canada
670
posted 4 years ago
Thanks for the input. I've got to check out R Scott's idea.

I don't know whether the oiler would have trouble when the saw is pointing straight up. Something to check.
Hans Quistorff
gardener

posted 4 years ago
I am thinking if you make a plunge cut in the middle of the bench then a slot at right angles to hold a bolt through the mounting hole for the tip guard that wold hold the tip steady. Then build a frame to clamp above the bench to hold the handle. Cutting from the top of the bar the sawdust would go through the slot into a collection box. You should be able to rip material up to the width of the bench and length of the exposed blade.
If you build your bench to with 2x4 or 2x6 material with slots between them you could make a sliding fence that is guided by the slot between them this would allow you to get straight cuts at uniform widths.
That is what I come up with based on my experience with electric chain saws and my fathers conversion of a buzz saw into a saw mill.

posted 4 years ago
I've given thought to this as well, post pictures if you get her running!