tomas viajero
Posts: 47
4
posted 4 years ago
I stopped building timberframes for other people a few years ago, but have felt that I still had at least one left in me... So, I designed a small five bent frame. 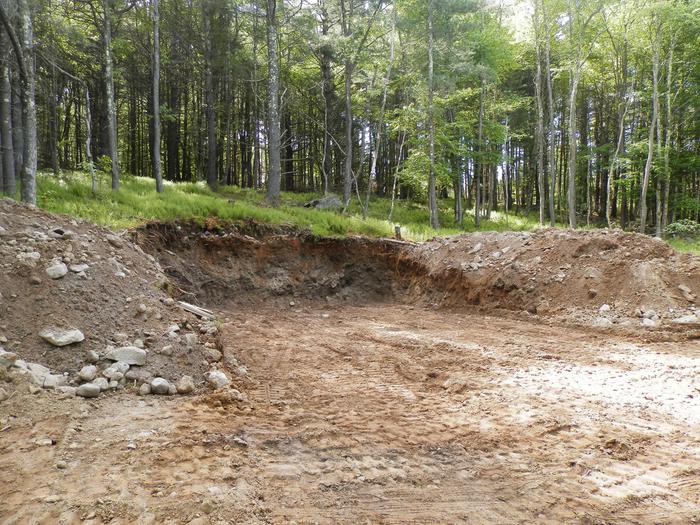 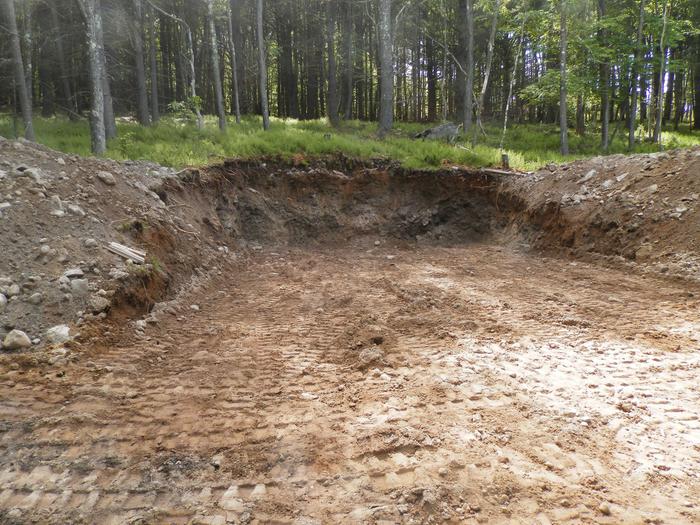 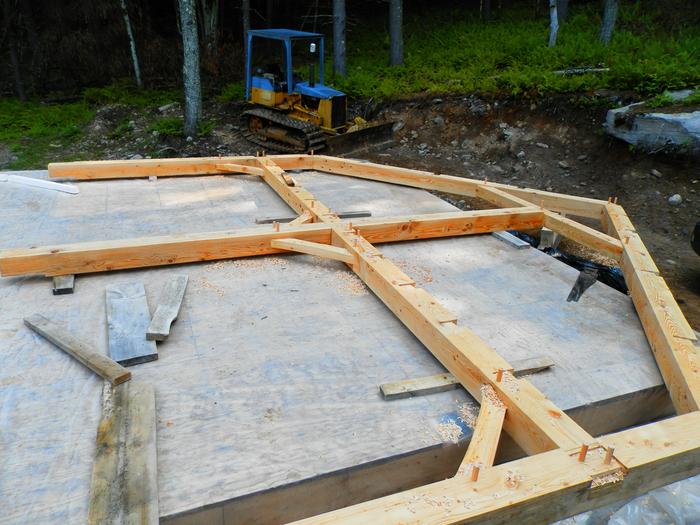 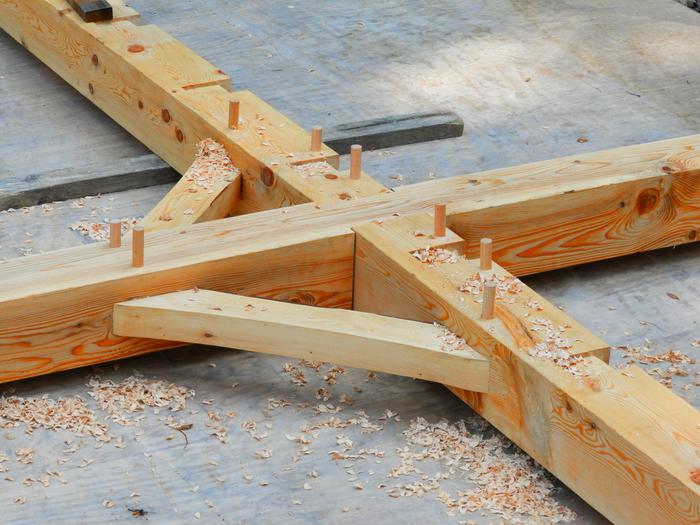 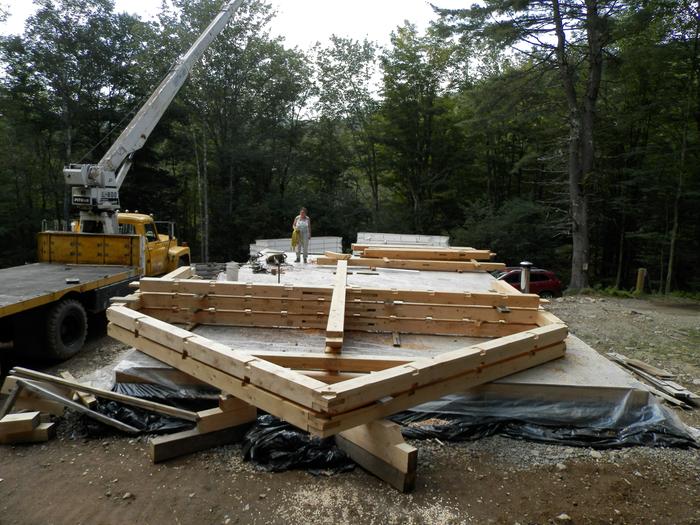 posted 4 years ago
I love it! Very nice job. Thanks for sharing photos.

What are the deminisions of the building? Size of timbers and spans between girts? How man man hours to build? What is used for shiething on the interior of the EPS panels? How do they attach to the house? How do you get plumbing/electrical through the EPS panels?

tomas viajero
Posts: 47
4
posted 4 years ago
Hi... thank you for the kind comments.
Lotta questions... I'll try to answer as coherently as I can.
The house is 23'x35' inside dimensions. or approx. 24'x36' outside dimensions, accounting for panel thickness. It's a small house.
The EPS panels on the walls are a sandwich of (from the outside) 7/16"OSB,5.5"EPS, 7/16"OSB, 0.5"sheetrock... which makes them about 6" thick. The roof panels are (from the outside) 7/16"OSB, 12.25"EPS, foil facing...making them almost 12.75". The wall panels are put up first and can be put up by a couple of strong people but I have an old crane onsite so I did them by myself. They're simply screwed to the frame 8"oc. with 8"screws, and splined together inside and out. The roof purlins are then covered by 1x6 t&g pine boards, (giving the interior a nice glow) and the panels are gently placed on that surface and with locations of purlins prepared screwed down with 14"screws. I had the panels pre-cut according to my plans with window and door openings carefully located so as to reduce on-site waste. The manufacturer also assured me years ago that they were able to recycle the waste EPS. Since I can't do that, it's a real plus. Planning for plumbing isn't a big problem, I just try to design in a location for a chase to go to the roof and put most of the plumbing below the first floor. Electrical is another story. I've run outlets in a kind of built-out baseboard... 1x9 on 3/8"spacers... hard to describe.. but the electrical is run behind the baseboard and on the surface of the sheetrock, with outlet boxes cut into the baseboard. Works well. For wall switches , I have to cut out sheetrock in a line, fasten romex to the OSB and cut out a switchbox. Messy but works well once it's taped. I don't like ceiling lights, but in the past I've fished them through channels cut into purlins or beams if a customer wanted track lighting of something. You just have to protect that wiring with metal plates so it isn't punctured by nailing at any point in the future. You never know.
Timbers: 8x8 for columns and beams; some 6x8 for perimeter purlins or at openings (like stairway of chimney); but mostly 4x6 for purlins spaced 2'oc for floor and 4'oc for roof. Collar ties are 6x6. Pegs are 1" oak.
I hope that helps...
Regarding man-hours? Who knows? I've designed and built many frames and speed is not my main concern. I think I started cutting joints in early July and had the frame up by the end of August. That's working by myself. I had some help (two inexperienced people) with the raising. I do have the advantage of some equipment onsite, tractor, crane, bulldozer, dumptruck. That helps a lot. But that hasn't always been the case.
I put up several of my first frames with a gin-pole, or raising off the back of a truck. We later advanced to leasing cranes before buying our own crane. The one I'm using now is not road-worthy so its owner had to get a new one , but the crane works very well. I was able to pick it up for the price of scrap. (And I can still sell it for scrap when I'm done.)
Just some thoughts.
Brett Hammond
Posts: 77
Location: Maryland, USA
5
I like...

posted 4 years ago
Thank yo so much for the info, Tomas. That is a beautiful building. The perfect size for a basement workshop, and the house should be very easy to heat. I understand what you mean about the electric cables in the baseboard. I have seen that done in photos.

Where is the best place to get lumber for framing? A local saw mill? Or is there something special about preparing the wood for a timber frame?

Will you put any finish on your frame and ceiling wood to protect it from dirt and dust?

Thanks again for the info. Very cool! It is a manly home.

posted 4 years ago
Tomas, this is beautiful! Where is it located? The roof angle suggests it could handle a decent snow load.

Will the masonry heater reach into the 2nd floor to heat it directly?
tomas viajero
Posts: 47
4
posted 4 years ago
Hi Brett- yes I hope it's easy to heat....
As far as sourcing timbers, I always liked to go local if I could. Trucking is minimal, you establish personal relationships with real people doing real things close to where you live, and your money stays more local. That being said... I've shipped Doug Fir from the west coast and Southern Yellow Pine from the south. Depends on the demands of the job.
Things to look for in a well-cut timber: you want it straight, you want it square. I'm less concerned about things like wane (that little bit of curvature of the tree rounding off corners of a timber) on big timbers, or checking. I don't concern myself with knots (since a long timber usually has less knots anyway. Long timbers are frequently clear.) Even twisted timbers can be worked with to an extent. No need to prepare a timber in any way before getting to work. You can work them green, and in many ways that is preferable, since any twisting in the drying-out phase will only result in tighter joints in mortise and tenon. At one point I owned a four-sided planer that I think could handle up to 12x8. It was a 5 ton flat belt machine that we ran off a Jeep motor. It did a wonderful job of sizing and squaring everything we put into it. Now, I just use a 12" Makita Planer... the hand-held kind, not the table-top variety. With this you rely on your sawyer to deliver square timbers.
After the joinery is done, I always put on a sealer of some sort... now I just use linseed oil. I once found a product with beeswax that was wonderful, but I can't find it anymore. I found that one coat of Linseed Oil let me scrape out any scuff marks or muddy foot prints with minimal effort. Just use a scraper of the tip of your framing chisel (at 90degrees to the surface).
Hi Steven- Yes, it should take a helluva snow load.
The plan is to have the Masonry Heater on the first floor and let the heat rise to the second floor. That should work. If not, New York State requires me to put in a heating system run off something more 'reliable' than wood, ie elec. gas or oil.
James victor
Posts: 32
3
posted 4 years ago
Lovely work.

Beautiful building.
cal learner
Posts: 2
posted 3 years ago
Your home looks awesome.  I will be following your project.
tomas viajero
Posts: 47
4
posted 3 years ago
I haven't posted any changes for a while even though I've been working every day...   to me it all blends together and I don't notice the changes.

But I thought I'd put up a few more fotos.

Windows and doors are installed, some interior framing, stairways begun.   For the last month I've been constructing the masonry heater.   First the foundation, out of concrete block, capped with a 6" concrete slab, then the heater.
P7300934.JPG 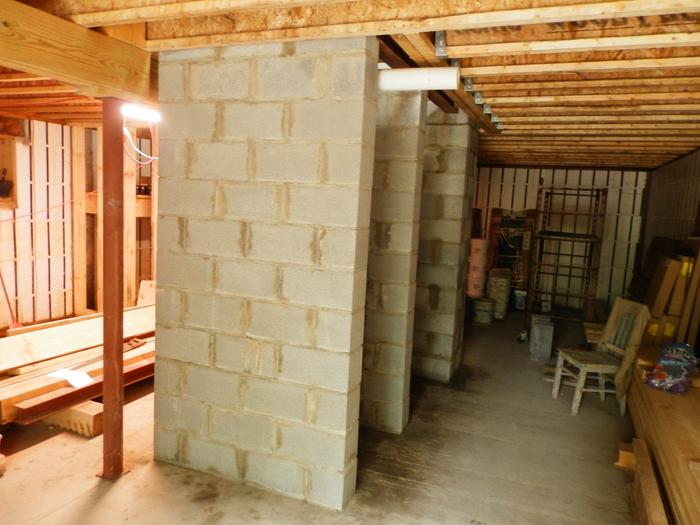 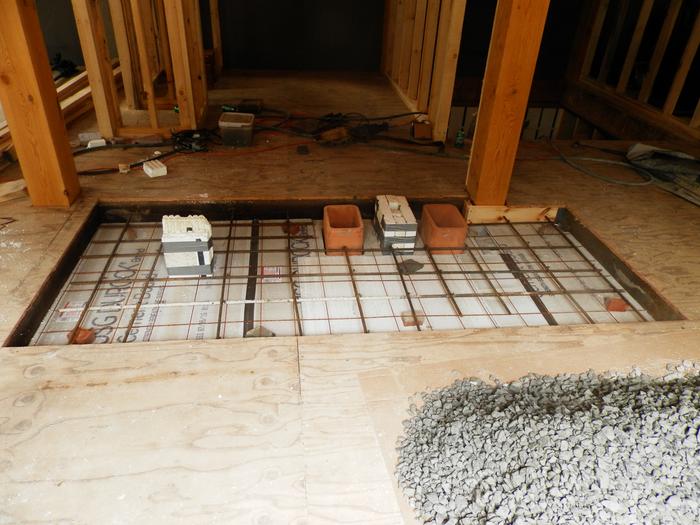 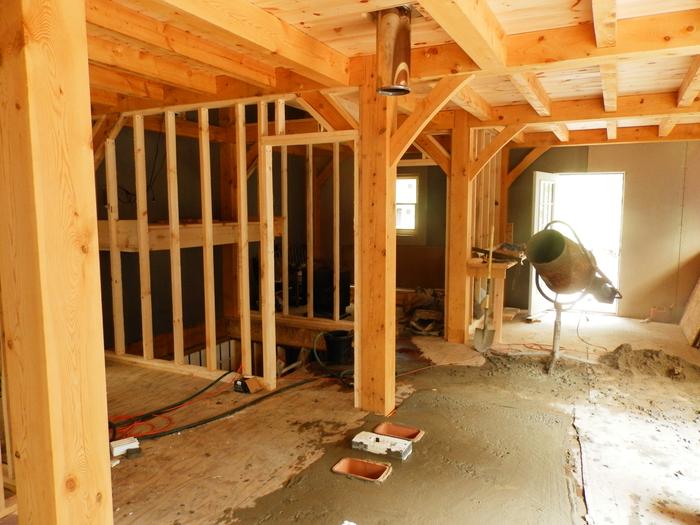 tomas viajero
Posts: 47
4
posted 3 years ago
After a long haul, I finally got out of the basement and up to the first floor. 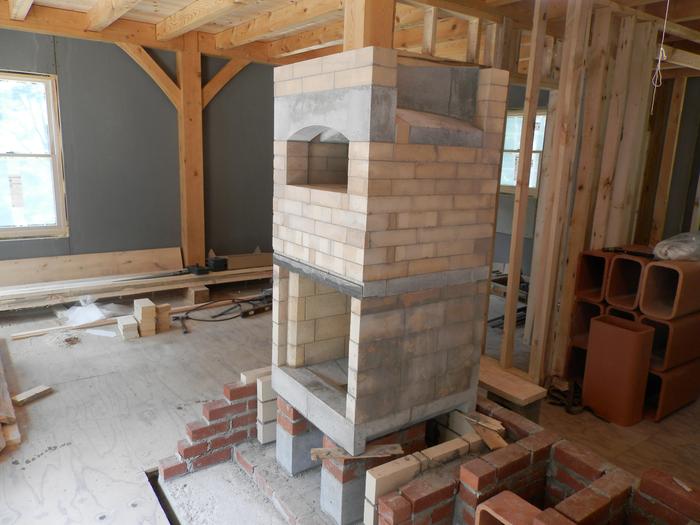 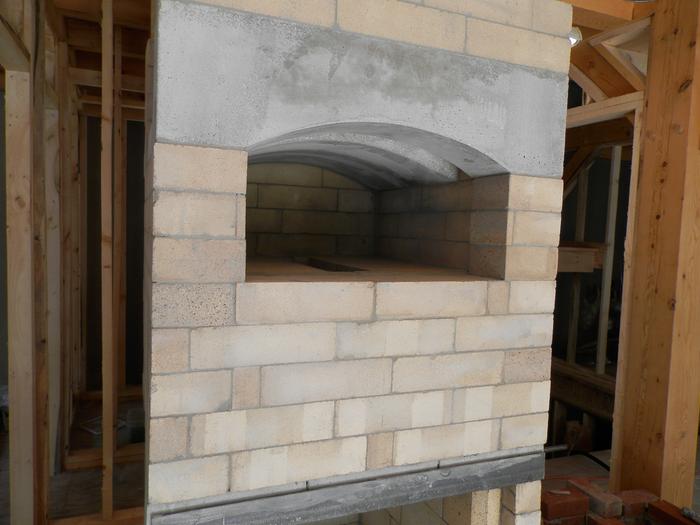 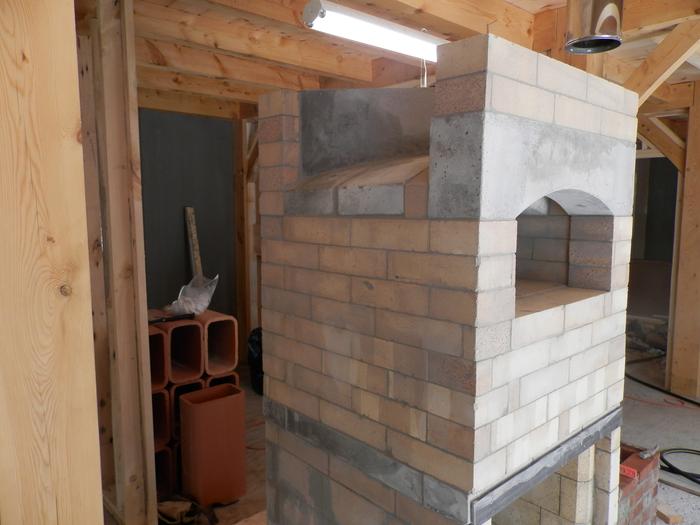 It's hard to say too much about material costs at this point...  those are my only costs actually since my labor is free...  Many things were already present when I started this project.  Electric was in, driveway was in, except for the crane I already had all of the tools.

I had to buy ICF forms for the foundation, concrete for the foundation, steel for the foundation.
I didn't spend a penny on the TimberFrame since the timber was on my property.  I logged it, cut it, and joined it.
The panels were a big expense.  I got a somewhat reduced rate since I had bought so many panels from these guys in the past.
The windows and doors were the next big expense.  No way around that.
Now I'm immersed in the masonry heater and I really don't know how much that will turn out to be.

Mostly, I wanted to show that a high quality living space can be built with patience and dedication by just about anyone if they have their wits about them.

Phase One-
Build the foundation, close it in, and use it as a workshop for cutting your timber frame.
Phase Two-
Erect your timber frame, close it in with your choice of EPS panels or straw bales, your choice.
Install doors, windows.
Get the roof on.
Close it in for winter, or move in and continue working.
Phase Three-
Finishing details.  Plaster, sheetrock, electric, plumbing, finish carpentry, kitchen and bathroom.

It can be done. 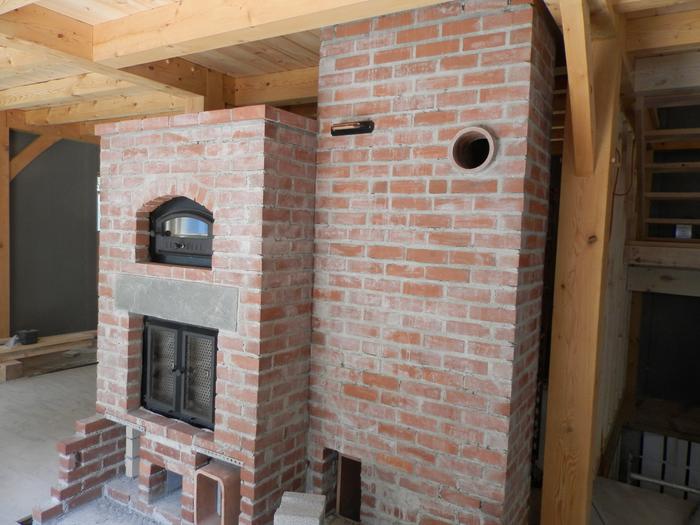 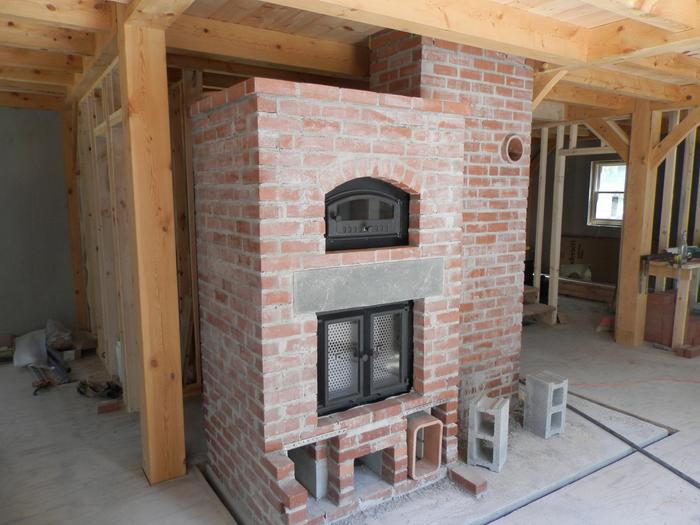 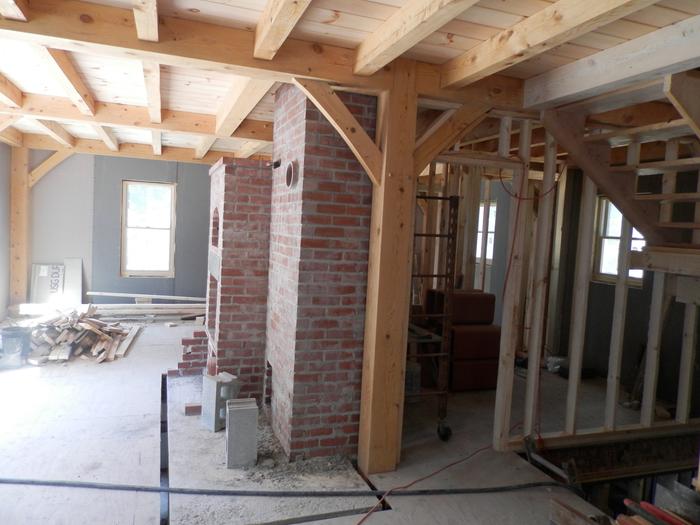 posted 3 years ago
this is going to be a beautifull house! I hope ours will look as good when we build it.
Michal Byrne
Posts: 7
posted 3 years ago
It truly is beautiful! Materials, workmanship... Appreciate you sharing the journey! I have a question about the size masonry stove; to my untrained eye, looks like an overkill for such modestly sized house - or is it required for capturing the heat, and radiating it slowly for long hours afterwards?

Yes, you know, it my be overkill...  I really don't know.  I guess I'm still learning about this thing.

The first few firings I got very little heat out of it.   Mostly they were very small fires to just help dry out the materials, since there's really a lot of moisture that accumulates in something like this during the construction process...  with all the bricks and mortar and stuff.   After finishing the chimney through the roof, and constructing the heated benches, I was finally able to put the fire into counterflow mode last weekend.   It performed very well.   I felt good heat through the doors , though the bricks were cool to the touch for the first few hours.   And well after the first fire died down.   The benches got warm.   About six hours after the fire died down the bricks began to feel warm.   It gave off a nice comfortable, radiant heat.

The second fire is when I was sold on it.   The bricks were already pre-heated, so it got pretty darn hot pretty fast.   I can't be more precise than that since I wasn't taking temperature readings or counting the minutes.   It stayed very comfortably warm for an entire day.   At no point was it too hot.   I imagine if at any point it got too hot during the winter I could just open a few windows.   I really don't like that feeling of being driven out of the house by a too hot stove.

But, as I say, I'm just learning how to live with this thing.   So far, so good.

I've added a few more pictures of the chimney through the second floor and through the roof.   It has three flues though only one is used by the masonry heater.   One is maybe for a wood stove, and one is extra.   I love the idea of having an extra flue available for some future idea. 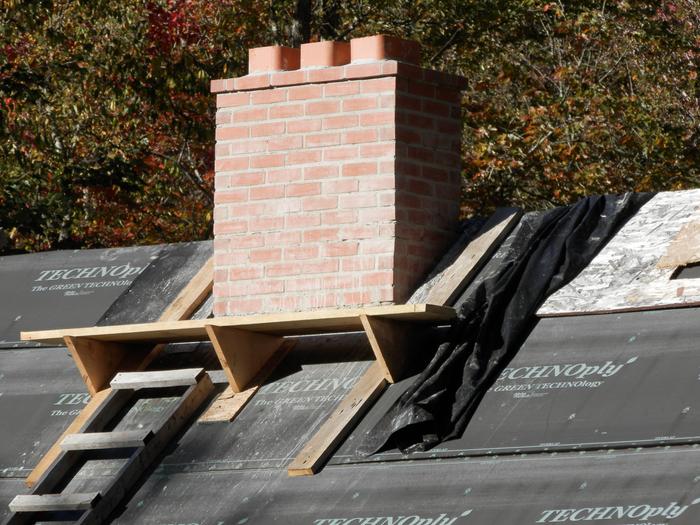 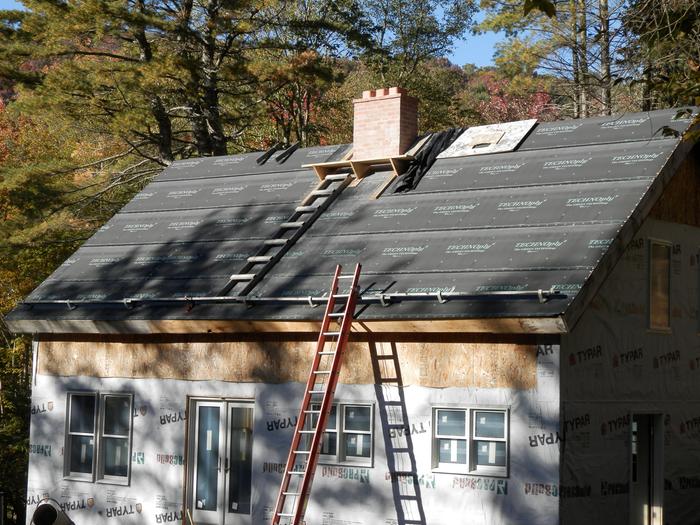 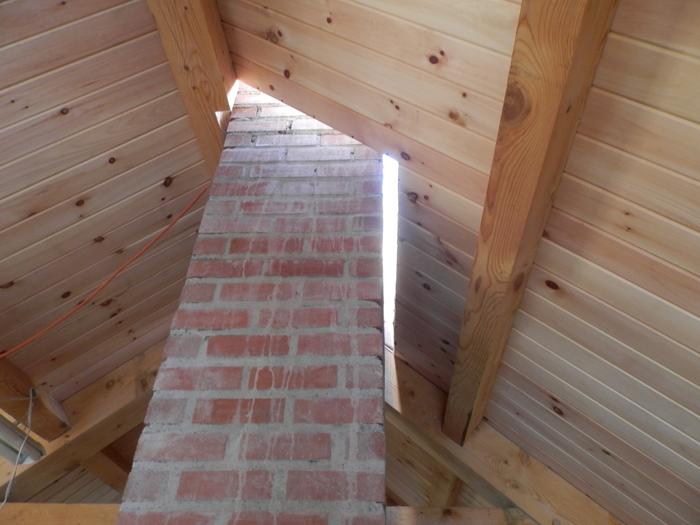