posted 4 years ago
This is my front entry table. It's the first thing I see every time I enter my home. The things that are displayed on it change regularly throughout the year, except the flowers. Or more accurately, I keep changing the flower arrangement but try to always have one. If you notice today, it's an orchid. It's not very permie of me to keep buying greenhouse grown flowers, but I have a hard time resisting when I walk past the floral displays every night at work.

I get great joy out having flowers great me at the door. I hope to reduce this extravagance over the future by planting more long lasting flowers in my yard. Or maybe just allowing myself to cut them, despite how much the bees are enjoying them. If I had resisted these orchids I could have white bearded irises and long spires of May Night Salvia blooms which would look lovely together.

Anyone else have a guilty pleasure or extravagant luxury item that they want to replace with a more responsible alternative. Not a staple item or necessity, just something frivolous that brings them joy?
010.jpg 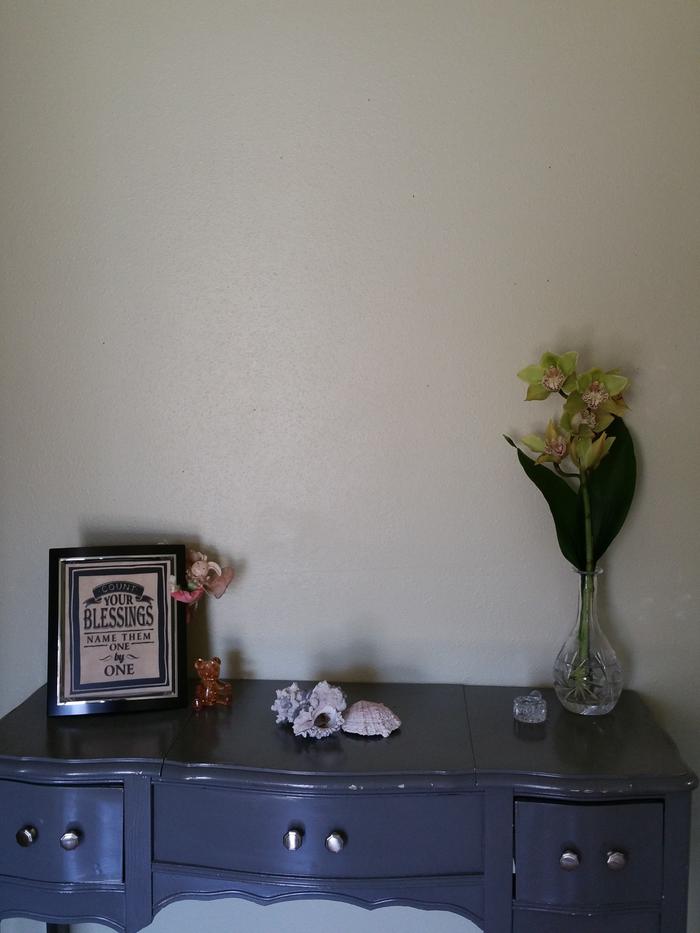 Though a friend of mine once told me that she was buying potted orchids for her office reception area. Trader Joe's had them for $15 and even though she didn't know how to keep them alive long term (her office was a bit dark) they lasted several weeks instead of the mere days of cut flowers.

So I now try to buy potted plants instead of cut flowers - especially ones we can plant outside later this spring! If they die, they've still lasted longer than a bouquet and it's more to compost. If they die after transplanting, still no big deal in my book. It was worth a little try.

Here are some examples.

An iris with a spent (blossoms done, but plant happy!) hyacinth behind it.

A very sad little holly, which came with fake berries, which we had in too dark of a spot over the holidays. Though if the little spurts of new growth make it, we'll try adding this to our hedgerow.

posted 4 years ago
Flowers in the house in winter are guilt-free luxurious! I have a couple of pots of African violets, Christmas cactus and Amaryllis that I keep going in hopes that something is often if not always blooming in the winter. If i would get my act together, I would also have freesias, which smell amazing. And force hyacinths, which isn't happening this spring either. But my Christmas cactus cutting from last fall is blooming, and so is a violet. Then my birthday daffodils will start blooming (we planted 1000 bulbs for my 50th birthday), and it won't be dark in the house and then the dutch iris will come back and by then it will be high spring.

I gave up my worst guilty pleasure last May. Cut flowers pale in comparison. But I like nurturing the perennials to come back again and again.

posted 2 years ago
Casie, I thought of your post and this thread when my little potted orchid bloomed again this winter. I am so happy about this! Not nearly as many blossoms as it originally had earlier this year (in the summer?) but I'll take it!

Have you grown more flowers that you were able to cut yourself for your entryway, Casie?

What other guilty pleasures or entryway flowers do you guys have going these days? Anne, do you have pictures of some of yours?

For me, it's the outdoor cactus garden. It was totally frivolous for the first decade, before I finally learned to eat a couple of them.

Sergio Cunha
Posts: 55
Location: Southeast Brazil
3
posted 2 years ago
I buy a few books that come from far away. Some of them are permaculture related but some others are just fiction. I think is a blessing I can read in English confortably. Those books are not translated to my native language but I still  badly want to read them.
To feel less guilty I  try to buy them second hand.

Sometimes a book I read about on permies or something I just want. I spent between $20 to $30 buying myself gifts this year.  A cover for my chair was the most expensive, then the "Joy of Cooking" which I am really enjoying.  I am waiting on two pastry sheets coming from China.

posted 2 years ago
Joseph, those cactus blossoms are gorgeous! Are any of those pictured edible?

I hadn't thought of the language barrier for some things, Sergio - good for you that you are multi-lingual!

Anne, I  keep hearing how "The Joy of Cooking" is...well, seminal, for lack of a better word. I have yet to peruse it myself.

Paul and I have been amassing a community library by visiting thrift stores. It's amazing what we've found so far. Lots of gardening/landscaping, wildlife, herb, carpentry, buiding, home repair type books. Not many of the best permaculture books yet, though we'll keep looking.

The yellow flowered cactus produces very edible nopales. The pink flowered poyacantha also produces edible nopales, but are more work because of larger spines.  They became less of a guilty pleasure when I started eating them.

I intend next spring to try eating the flowers. The fruits on the varieties shown here are not good eating.

Jocelyn Campbell wrote:Anne, I  keep hearing how "The Joy of Cooking" is...well, seminal, for lack of a better word. I have yet to peruse it myself.

Paul and I have been amassing a community library by visiting thrift stores. It's amazing what we've found so far. Lots of gardening/landscaping, wildlife, herb, carpentry, buiding, home repair type books. Not many of the best permaculture books yet, though we'll keep looking.

My favorite cookbook is Fannie Farmers Cooking School Cookbook.  My paperback is worn out and I keep it in a zip lock bag to keep it from getting any more wear.  I bought two of her older edition, they are just not the same and unfortunately are pack away in storage.

I asked about a cookbook for a 12 yr old girl and one member recommended the "Joy of Cooking".  I bought a used one to see if I thought it would work for the girl.  I have not tried any recipes yet but the details are great for learning.  I am sure I had looked at it at libraries and thought it too detailed.  The 1997 edition has 1136 pages total.  I paid $3.50 with free shipping for this one and it is like new hardcover.

Ebay does have some permaculture books. Some of their seller are Goodwill and big book stores.

posted 2 years ago
Joseph, I have never tried any type of nopales (or cactus), but it's on my bucket list. It's really cool to hear about your experiences with them. I have tried leaves of succulents (or similar plants to succulents) and they are just okay in my book. I heard from John Salviet that he prefers succulent leaves as (part of?) a ferment to make them more tasty.

Anne, I'll keep an eye out for the Fannie Farmers Cooking School Cookbook. I didn't grow up with much whole foods cooking, so I learned a lot of that from Laurel's Kitchen, which I gratefully received as a well-used original edition. That second-hand book ended up disintegrating a bit like you described your Fannie Farmers did. Then my family gave me the New Laurel's Kitchen, and it was a decent enough re-write that I recycled the old one (though I wrote down the Stratford Hall Biscuits recipe that wasn't in the new version). I still use my tattered, food-splattered version of the New Laurel's Kitchen quite a lot.

We have a few cookbooks here (I lost half of mine to divorce and Paul didn't arrive with any) though I think we could use more. "The kids these days" (and myself) look up recipes online probably more often than not, so our cookbooks aren't used as much as they were some decades ago, though a cookbook page doesn't go dark to save energy when you are elbow-deep in batter or some such. ;-)

Attempting to expand libraries (cookbook library plus general library = libraries, plural, I guess) here at wheaton labs seems less of a guilty pleasure when it's meant as a community resource. So that kind of brings the topic back round full circle for this thread. :-)

posted 2 years ago
We always wanted to have a wood cook stove, and while we found a few, we ended up passing on them due to clearance issues to combustibles, and the problem of having a chimney. One day we were getting parts for our pot bellied stove at a antique stove shop, and saw a 1917 Crawford gas cook stove. The woman took 50% off the price because I happened to have the cash in my pocket, and ended up bringing it home. It operates on propane instead of wood, and in many ways that is wrong, but it fits well in our 1930's era kitchen, and really works well for our big family.

Who knows, maybe someday we will get a biogas station hooked up to run it! (LOL) 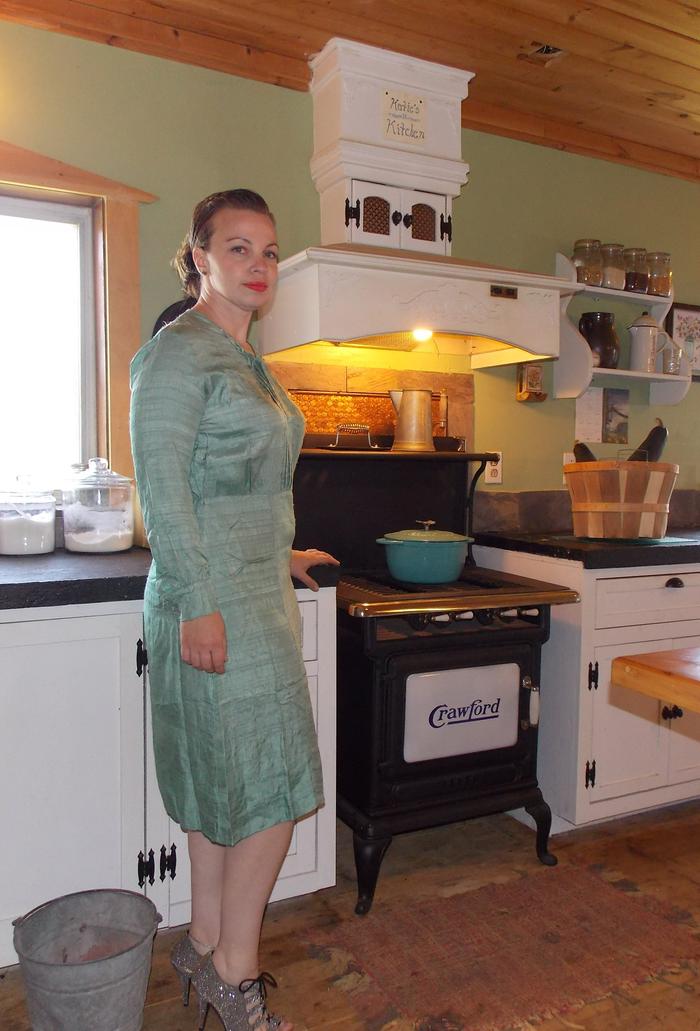 posted 2 years ago
What a beautiful stove, Travis!!

In Montana it's still very much winter, but the grocery stores have been selling potted spring bulbs. I bought a nice sized pot of purple hyacinths, which are blooming in the kitchen with their heady scent as I type!

Those, plus the daffodils and crocus that are spent from a couple weeks ago, will go into the ground when it's not frozen, and when I have a spare minute. More flowers - yes, please!!