first the links where we got the information about Light Straw Clay (LSC) for someone wanting to learn it:

J. Tabordiy
Posts: 65
Location: north-west coast of iberian peninsula
10
posted 3 years ago
now we are filling up some of the walls to try out the technique and fast realize we had done too much framing for the LSC and took it out again

some pics of the the first experiment 3 weeks ago, then we had to find more straw (we had a couple of strawbales to try it out and get an idea of how much we need) and took out the excessive framing while going upward with the wall
IMAG0008.resized.JPG 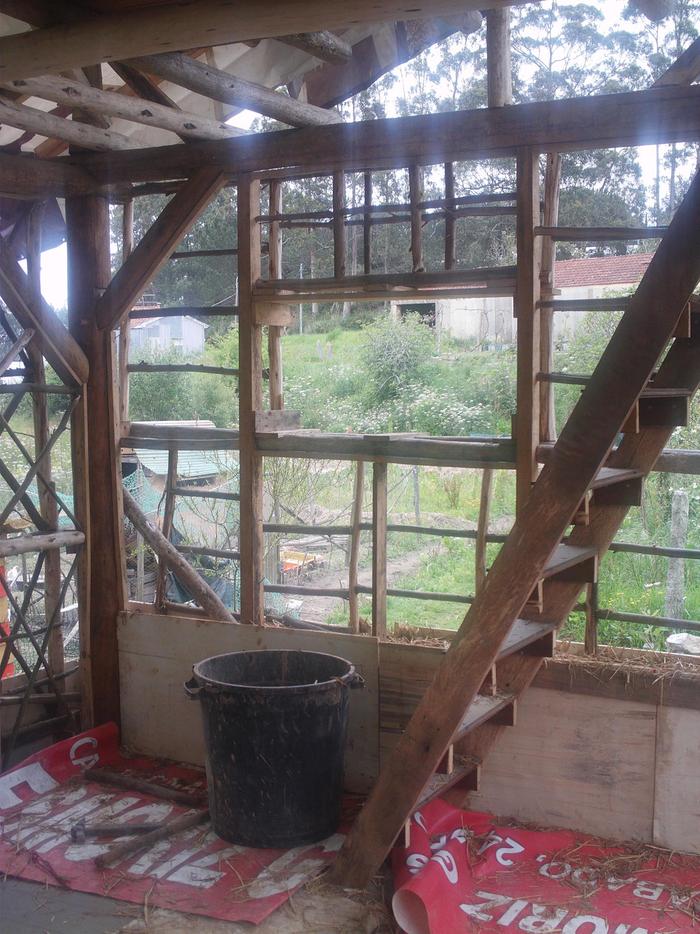 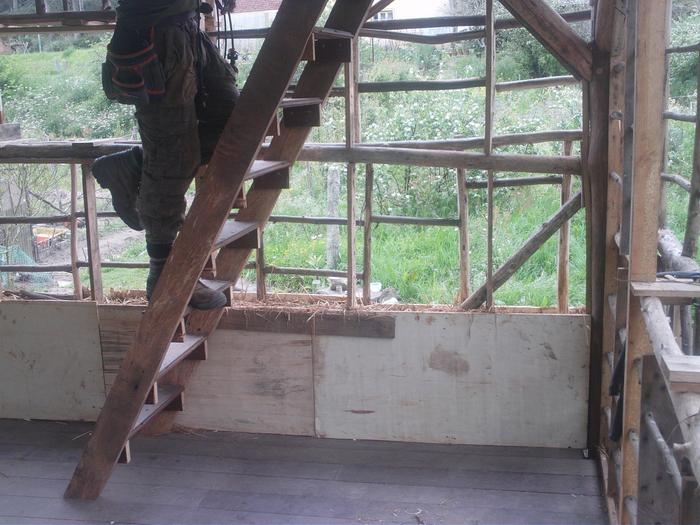 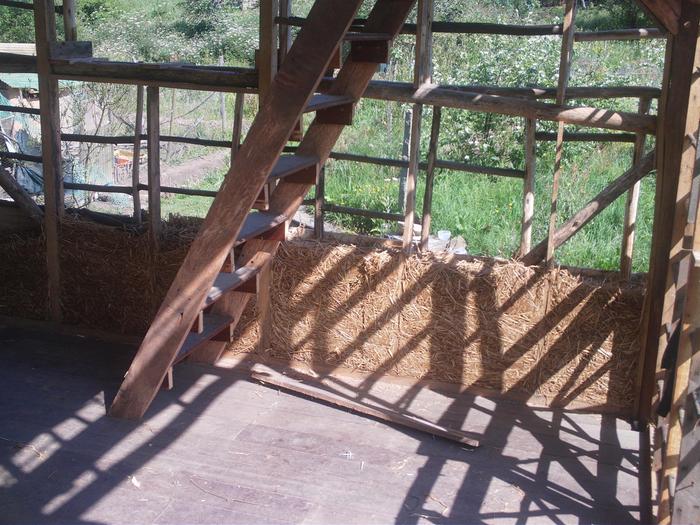 J. Tabordiy
Posts: 65
Location: north-west coast of iberian peninsula
10
posted 3 years ago
we wanted to play a bit with bottles inside the walls to let some funny light in and because we had been saving them for years and it's a good excuse to get rid of them

we cut them with and angle-grinder fixed on a bench, i cut more than 100 bottles and only one (of the first ones i did) broke on my hand

we cut them on the right size for each wall (from 23-26cm) and glue them with tape, we tried to clean them the best possible and then position them between the boards when filling the straw-clay mix 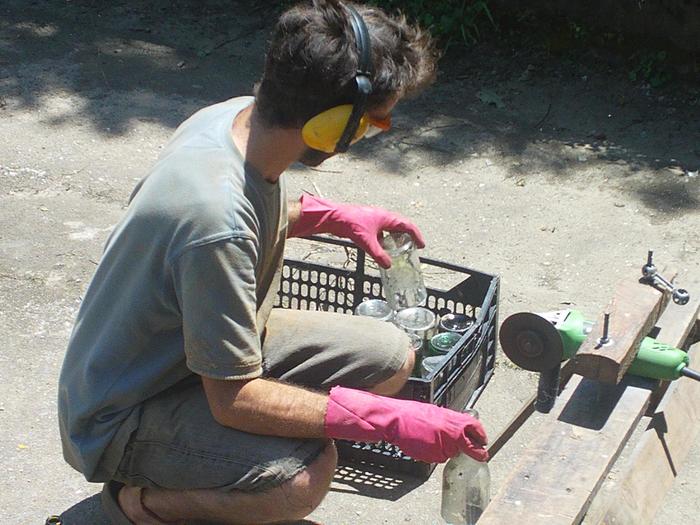 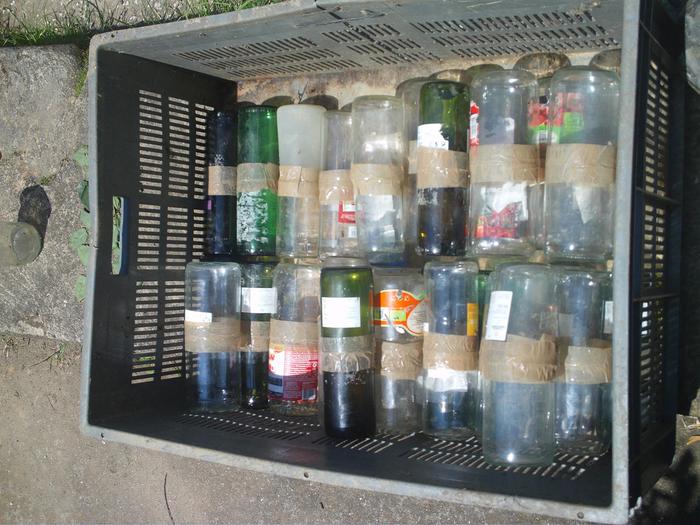 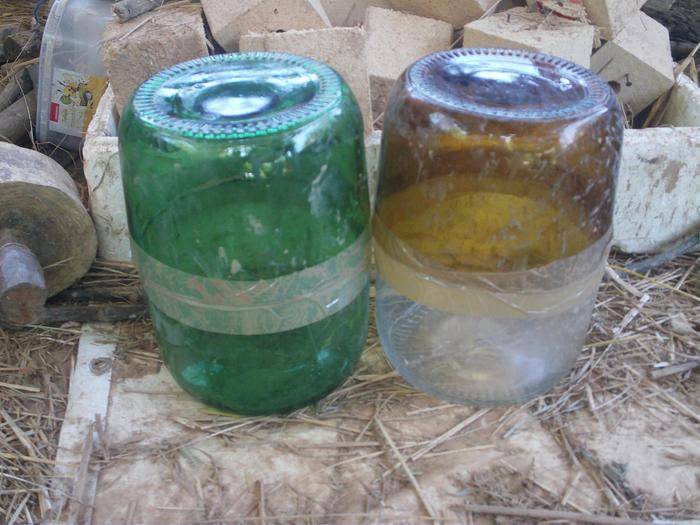 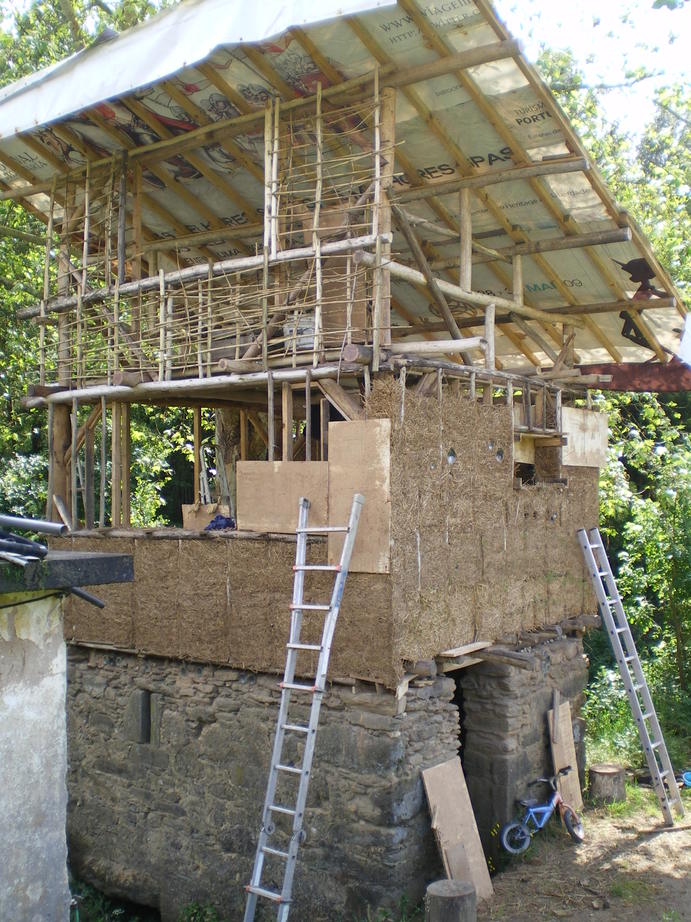 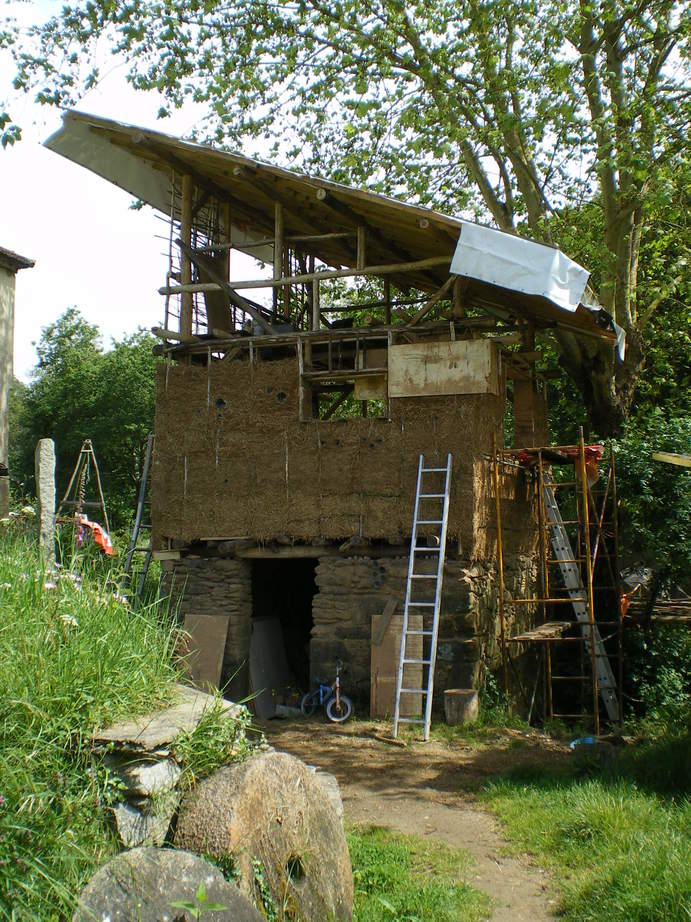 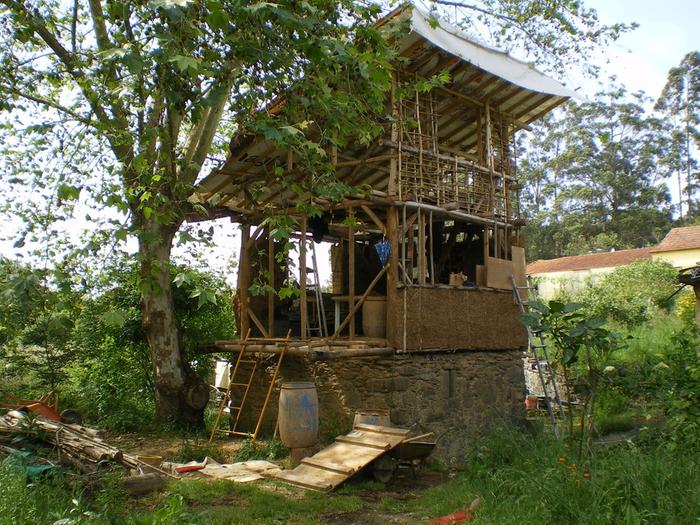 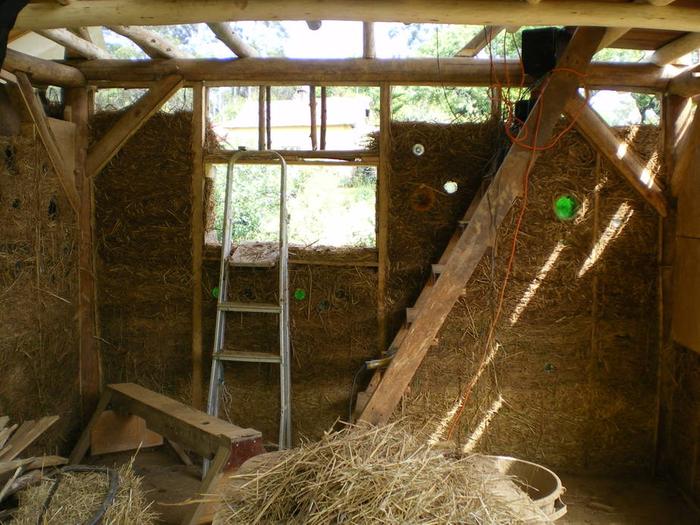 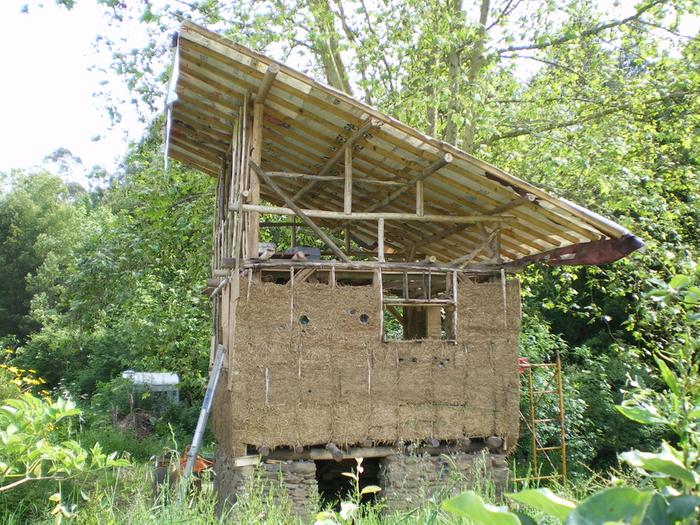 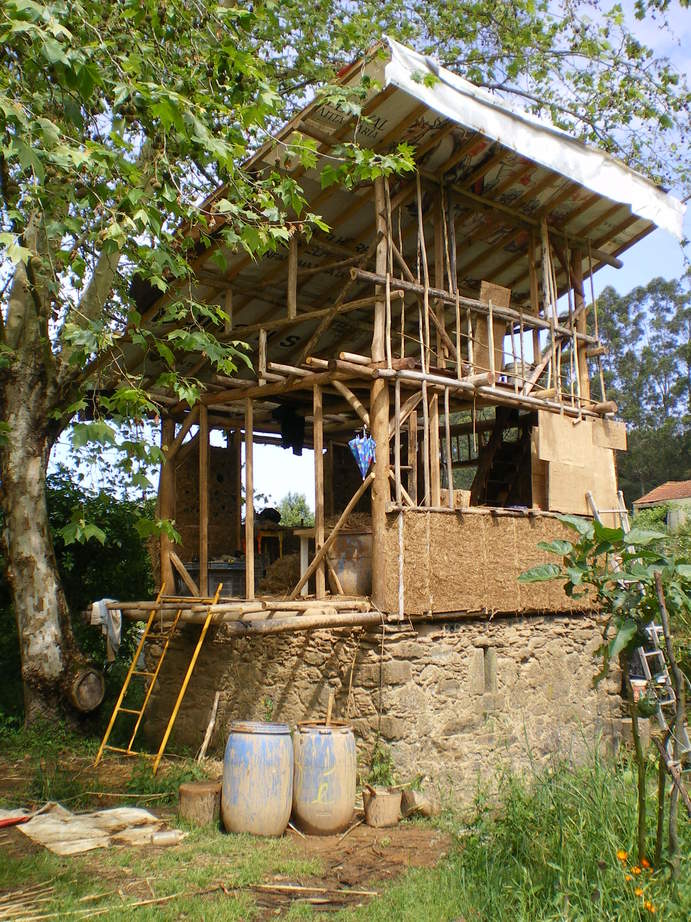 Jay Muir
Posts: 19
posted 3 years ago
that is beautiful so far! thank you for sharing.

Sitting in a garden and doing nothing is high art everywhere. - Mike Garofalo

J. Tabordiy wrote:we wanted to play a bit with bottles inside the walls to let some funny light in and because we had been saving them for years and it's a good excuse to get rid of them

we cut them with and angle-grinder fixed on a bench, i cut more than 100 bottles and only one (of the first ones i did) broke on my hand

we cut them on the right size for each wall (from 23-26cm) and glue them with tape, we tried to clean them the best possible and then position them between the boards when filling the straw-clay mix


Cool home! Like the art glass. We built our bermed-earth home out of tire bales (covered with adobe). We did a similar thing with art-glass, except we used tennis cans, with candle votives on the ends. Gave us more choice of colors.
David Gould
Posts: 38
Location: united kingdom south wales on a hillside
4
posted 3 years ago
I used to be a British soldier way back in the 1960's and for my sins I often lived in large barrack blocks five floors high in various towns & cites in what was the old West Germany . These barrack blocks had 20 inch thick walls with two windows set 10 inches apart as a double glazing style .

The outer skins of the building was a reinforced concrete set of pillars and floor beams , laid between was hollow extruded clay fired bricks about 6 inches thick and the inside was panels of compressed straw mixed with a lime based clay mix
.
Evidently as far back as 1932 when Adolf was kicking off , the barracks started to be built , often with forced labour and in later real the second world war era by slave labourers who were worked to death .

In 1969 I was fortunate enough to see one of these inner straw panels being remade to complete some building alterations .
The Germans doing it told me it was exactly as they were originally made , but this time they got paid instead of being beaten. ( German humour I suppose .)

A wooden frame with end hinges and a removable hinge pin at one corner, some 16 inches deep was the outer form , at 4 inches up on the inside it was stepped with a three inch thick lath running all round the inside .

The frame was placed on a flat level concrete surface , filled with the straw, lime & mud mix which was being made just a few feet away. Then trampled on by a couple of guys for 20 min or more till all the straw had broken flat and started to drop down to the 4 inch lip . All bits over the edge of the internal three inch lip were carefully scraped inwards to allow a clean lip .
A large board of planed planks( not ply ) was then inserted in the main frame and loaded with bricks till it settled down evenly on the 4 inch shoulders . They left it like that for six days till the mortar had dried enough to allow removal of the frame to give a precise sized even well made strong thermal batt . Could you construct using that idea for future walling especially internal walls?

How long did the barracks stand ?
I went back to some of the areas I was in last year in 2015 , the barracks are still there , so you are looking at 83 years of them being excellent thermal insulation and light building support .

The straw goes a real dark woody brown after awhile . The adding of lime helps keep out insects as it burns them & mice as it wrecks their stomachs .

Do you have any through bolts & fish plates in your panel forms to stop them bulging out as you fill and tamp them down ?

Strong belief triggers the mind to find the way

we've been busy continuing the house, althougt we also did some stoping to join an Anti-Fracking biketour on portuguese coast for about a month

the light-straw-clay is all filled, we need to plaster it still, 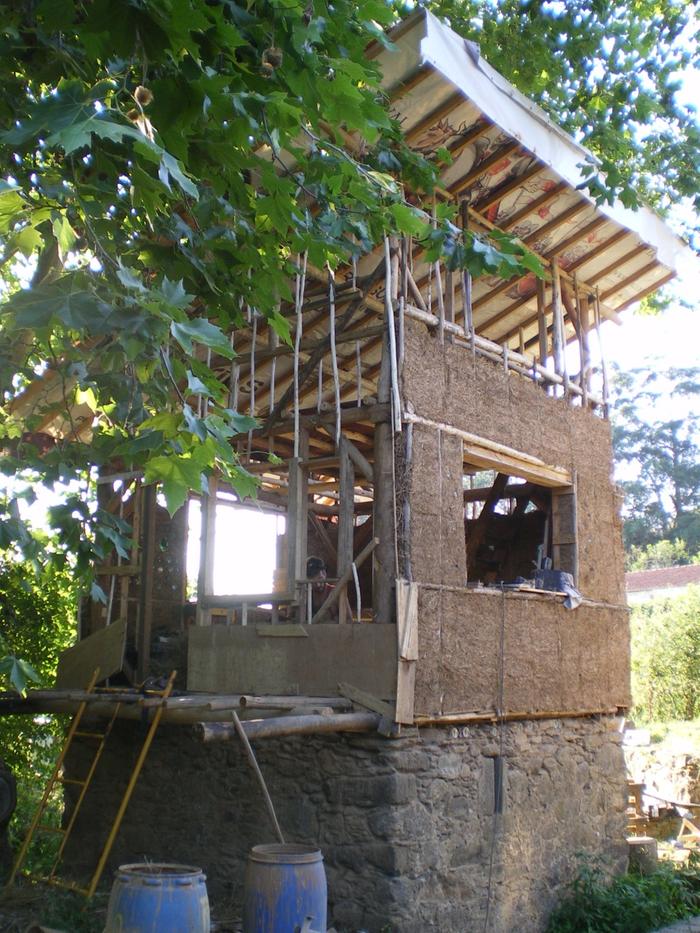 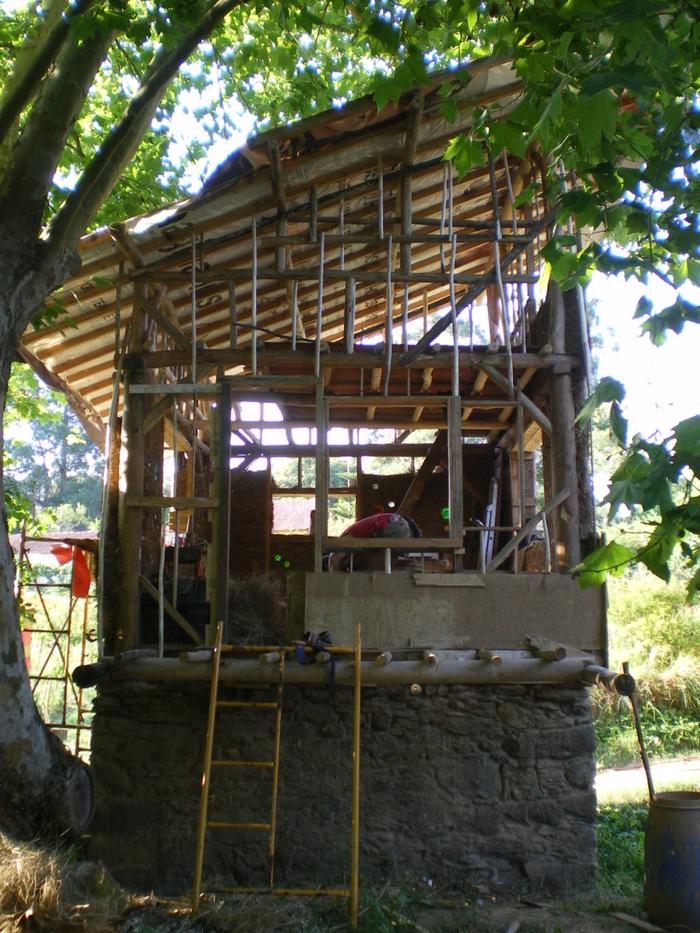 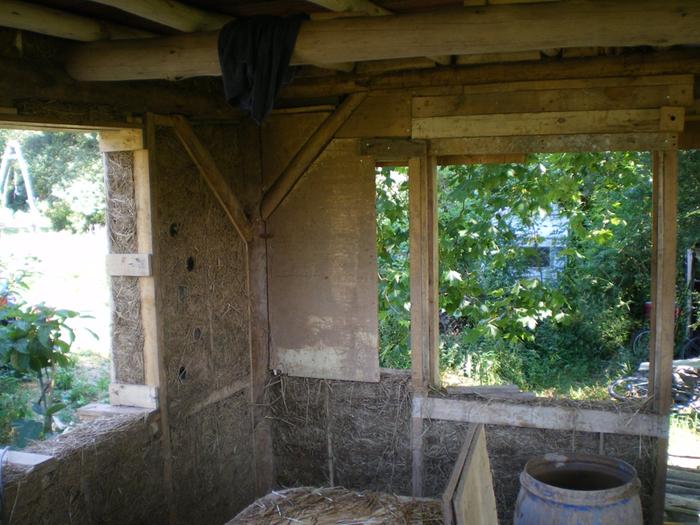 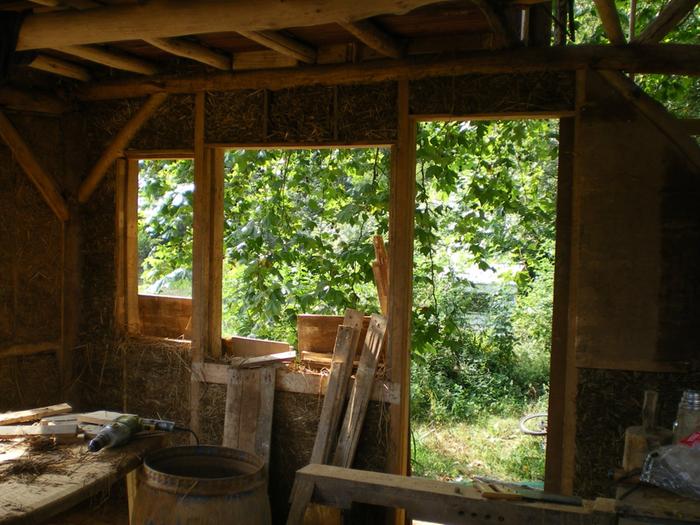 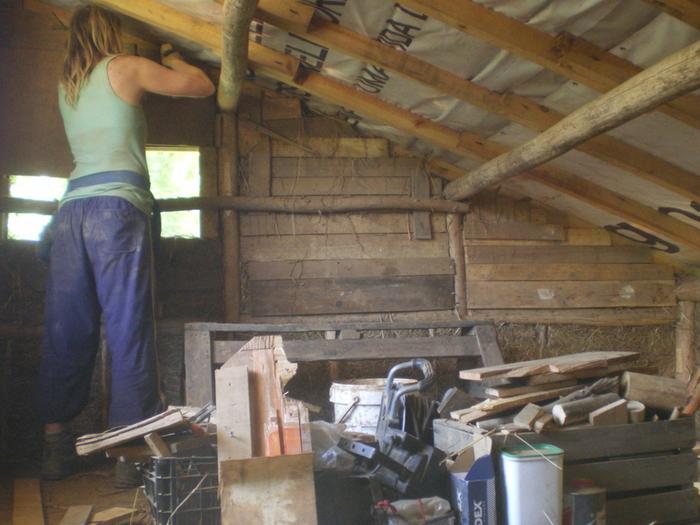 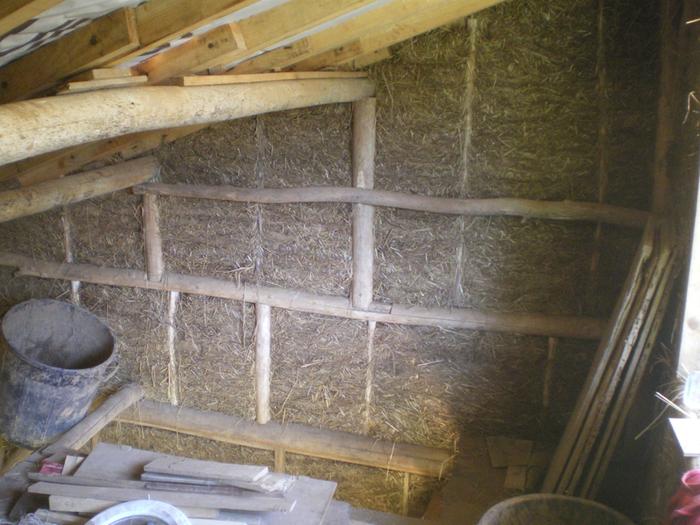 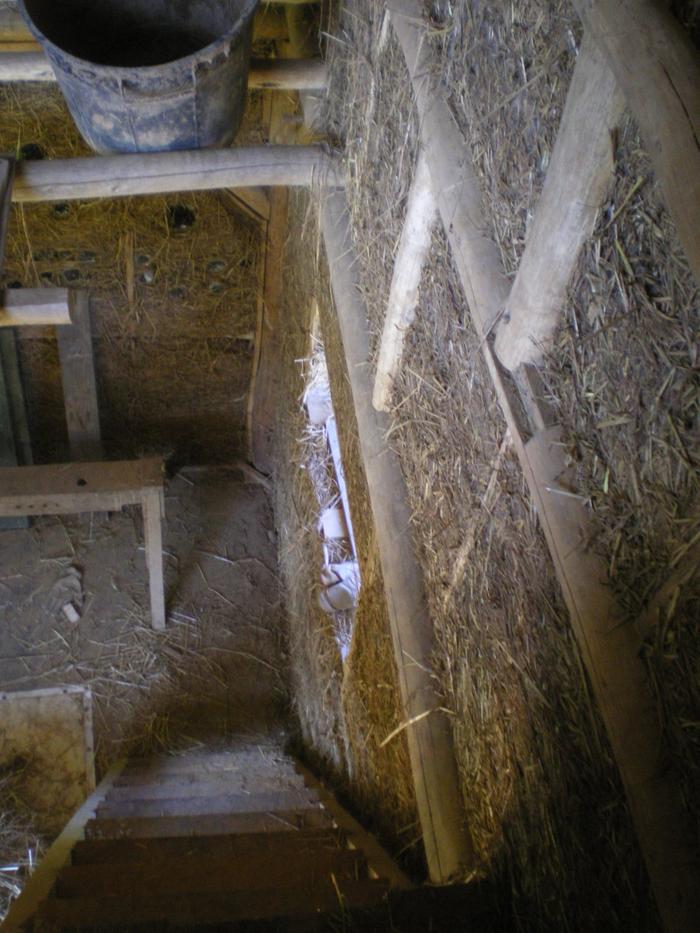 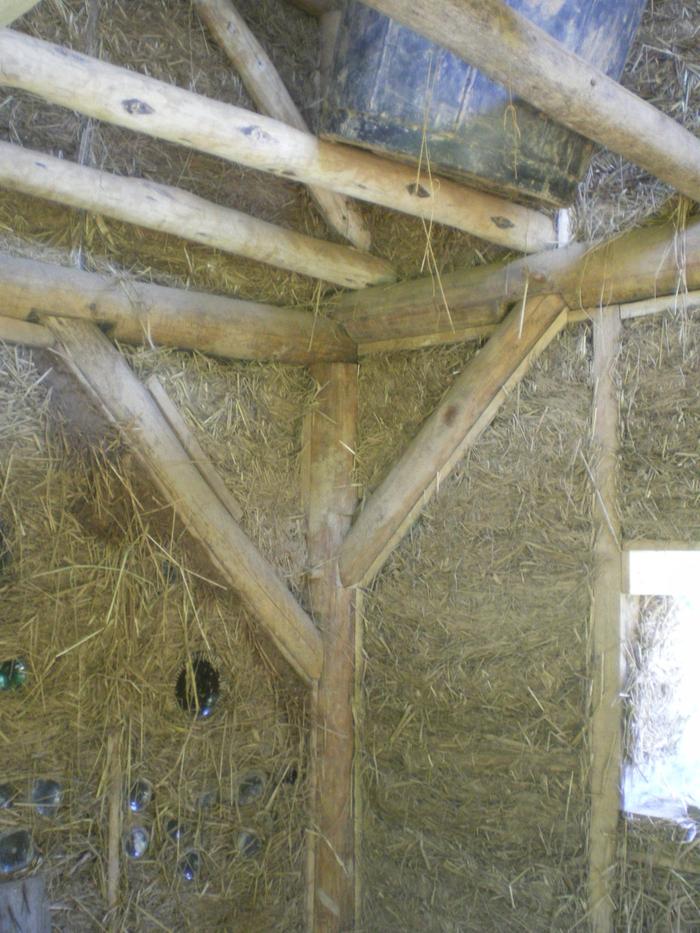 J. Tabordiy
Posts: 65
Location: north-west coast of iberian peninsula
10
posted 3 years ago
timberframing visible from the inside of the house 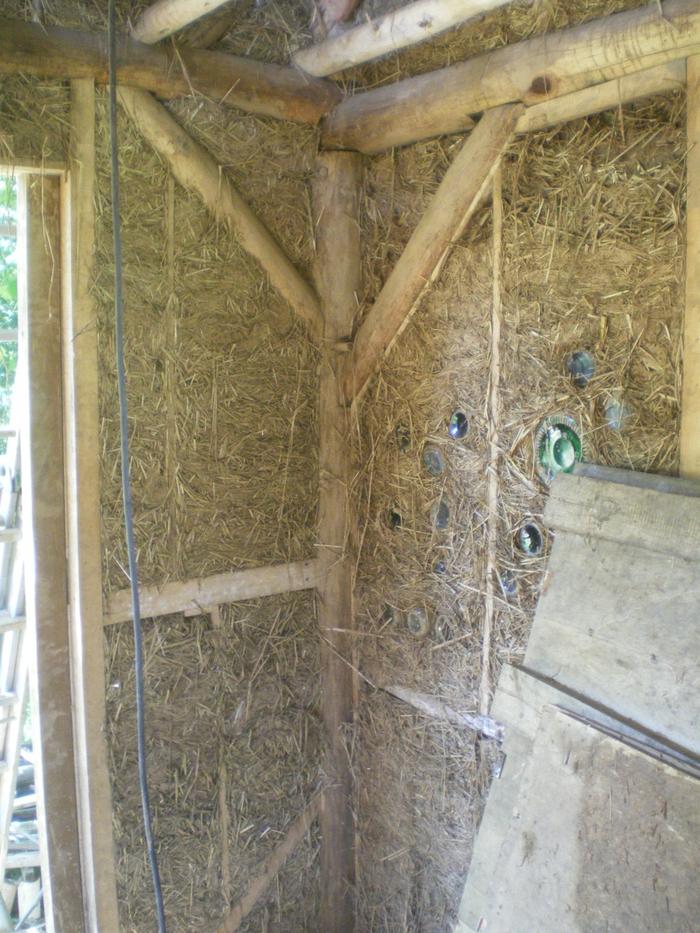 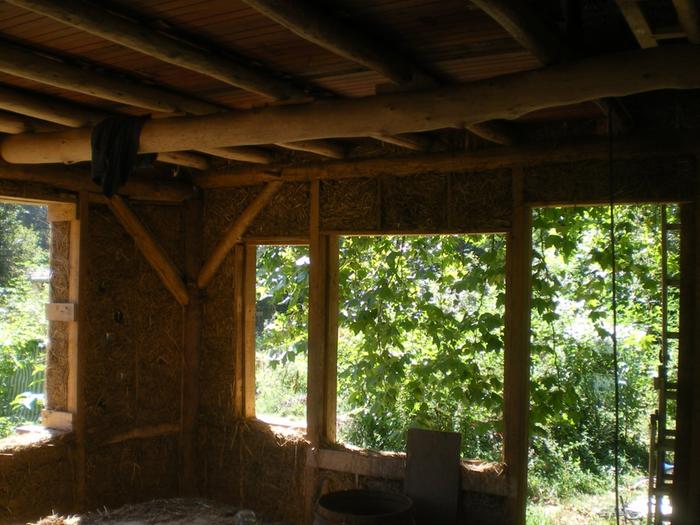 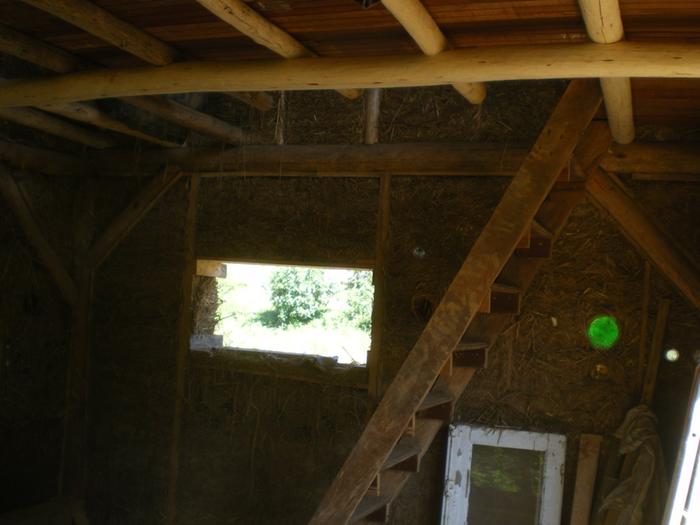 J. Tabordiy
Posts: 65
Location: north-west coast of iberian peninsula
10
posted 3 years ago
last pics of the LSC walls, we returned home this week and have to start plastering and fixating door and windows, any advices for that?...still not really sure wich mixture to use on the plastering, will make another post about it, we would like to not use lime on the plastering (only on the last layer) so e can continue using our bare hands and not get burned skin :/
IMGP0039.JPG 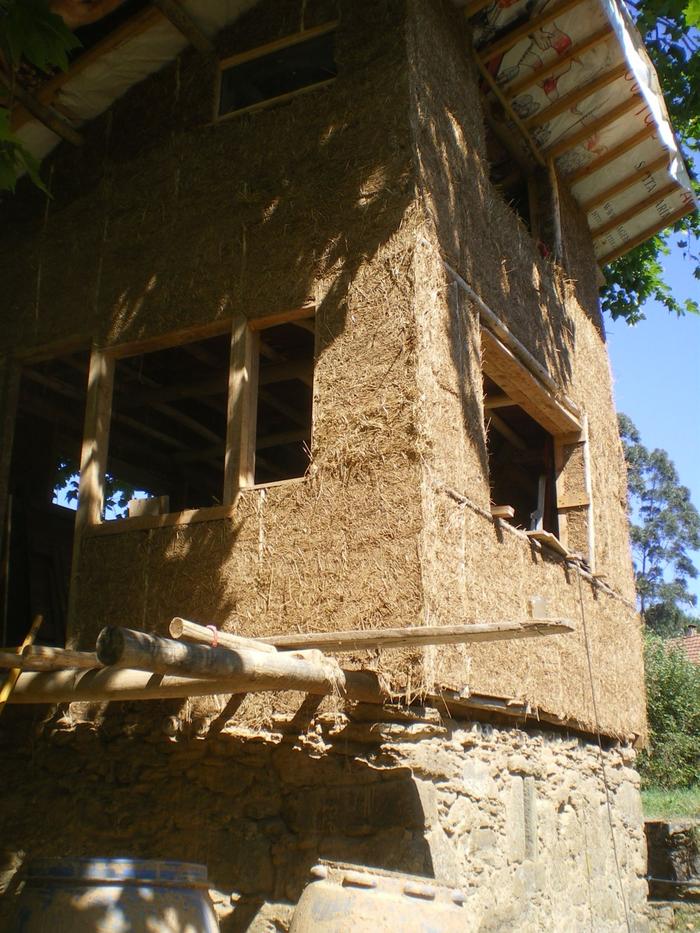 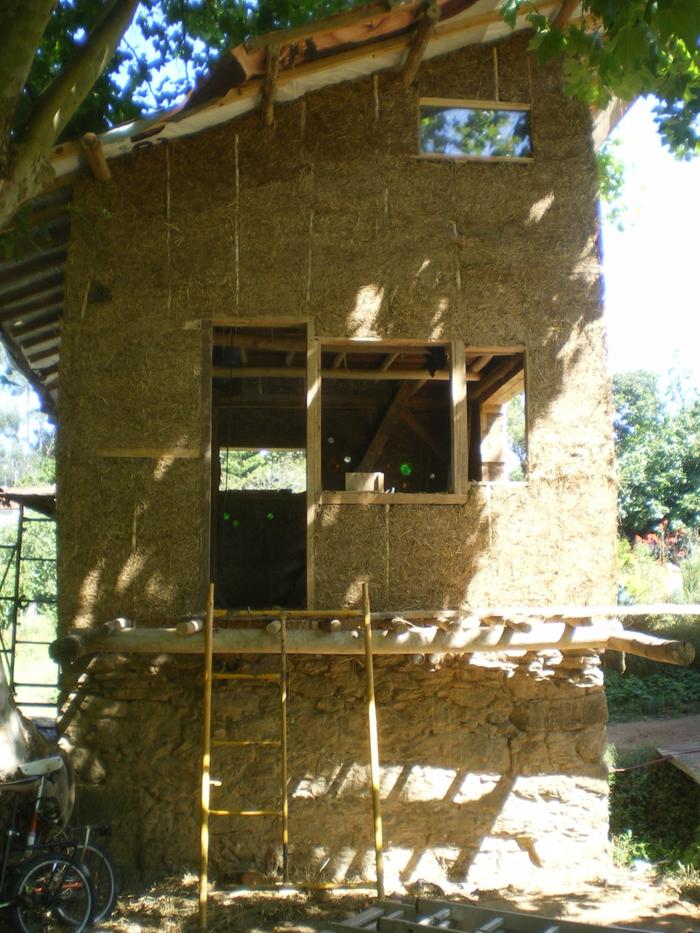 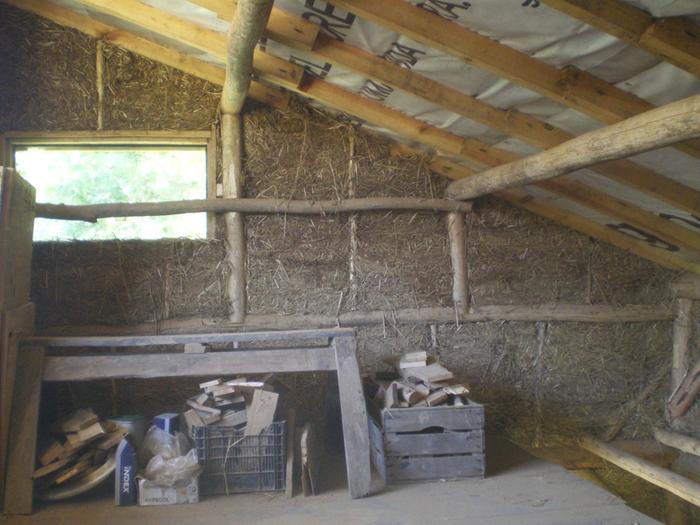 Magnus Homestead
Posts: 1
Location: S.W. Washington state, Columbia River Gorge area
posted 3 years ago
Wow, I am really impressed with your whole project here. We are planning to build some roundwood timber frame structures on our property. I love that you just dove in trusting that it would work out.  It's looking truly beautiful already.
I am inspired - thank you so much for sharing this build! Hope we get to see it when it is finished!

J. Tabordiy
Posts: 65
Location: north-west coast of iberian peninsula
10
posted 2 years ago
Hi, the house is finished and we are living inside since end of last year i forgot to share the link to the plastering of these walls, check it here: https://permies.com/t/59440/Plastering-Light-straw-clay-Roundwood

carlos santacruz
Posts: 2
posted 2 years ago
Awesome job!! How thick are your walls and what is your expected R-value? Also, whats the weather like there? I ask because I am planning on insulating an old home using strawbales, but havent decided on whether to use light Straw or full strawbales.